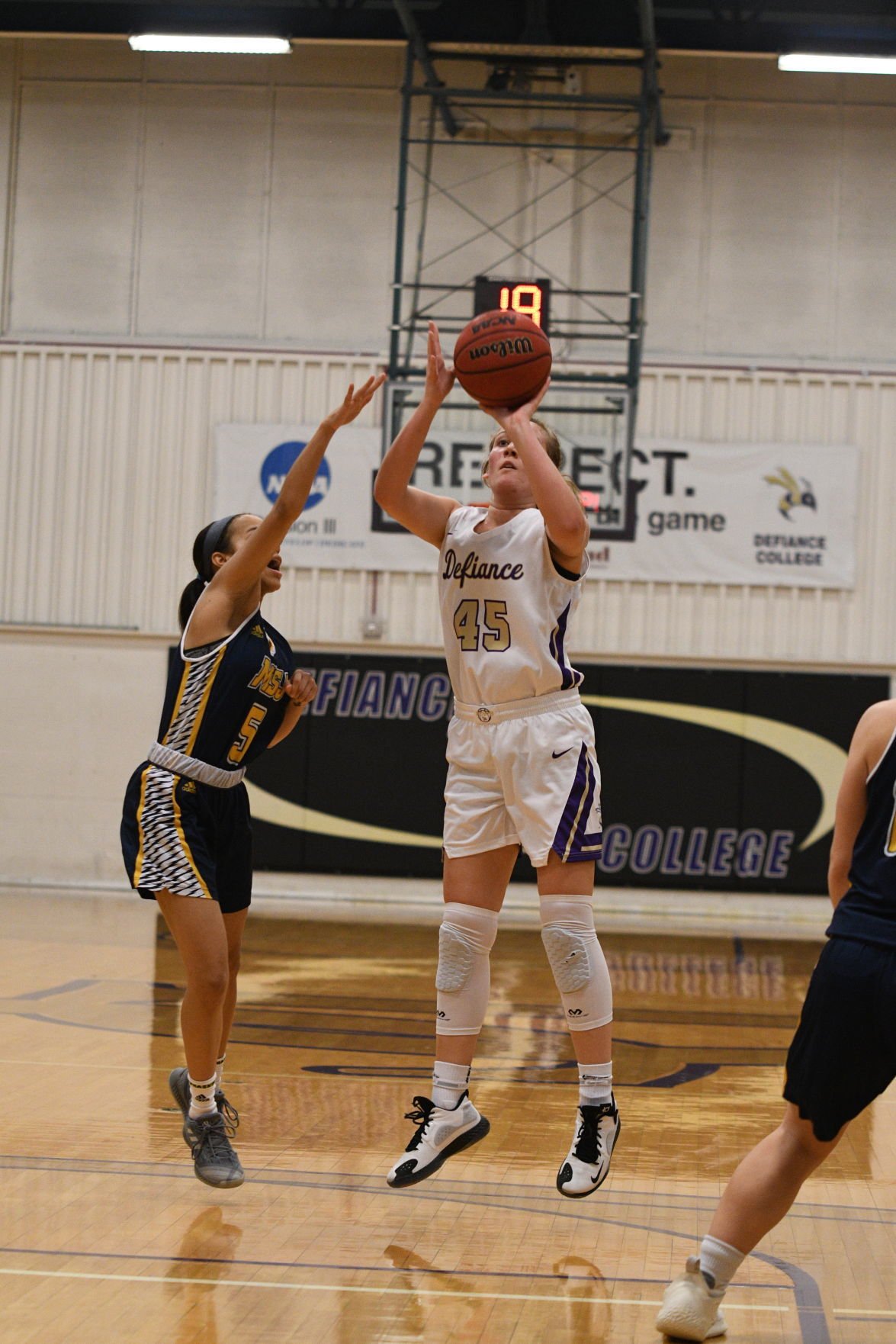 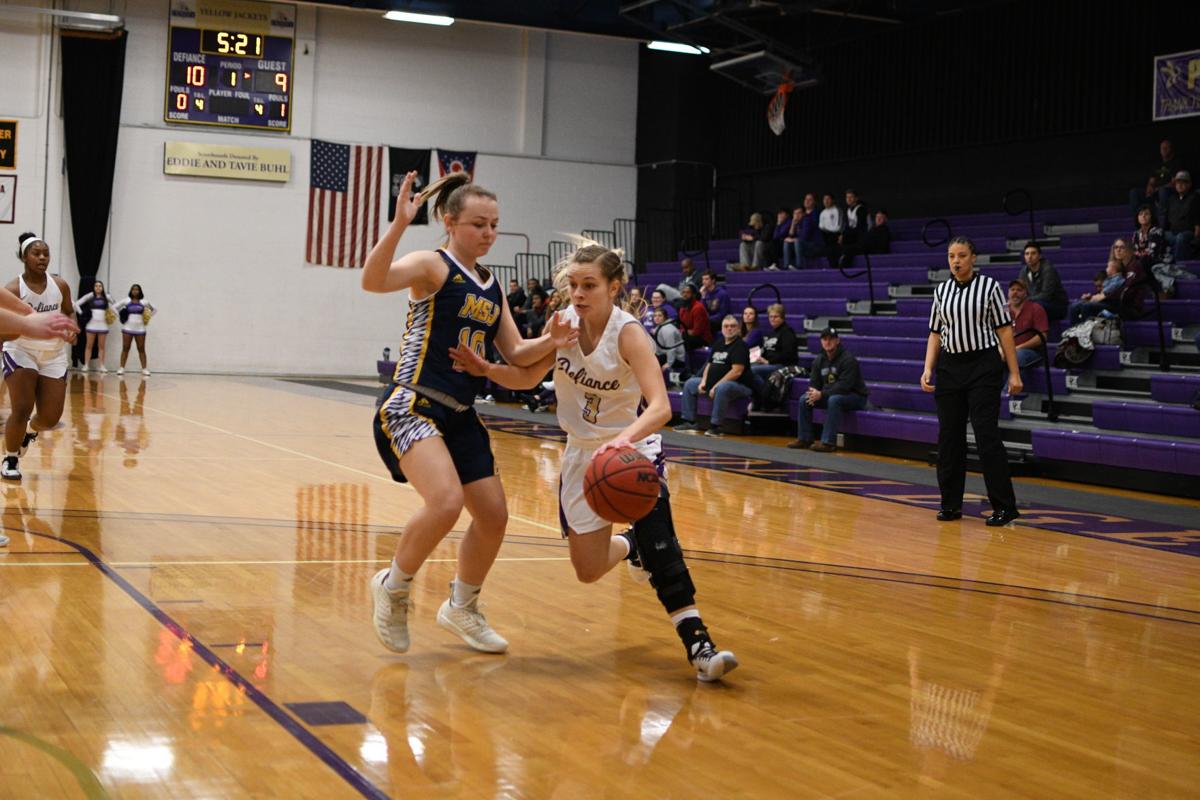 Coming into Saturday’s HCAC showdown with identical records and similar looks on the stat sheet, the Defiance College Lady Yellow Jackets and the Lions of Mount St. Joseph appeared fairly even on paper.

Little did anyone know at the tipoff how even that would play out on the court, or how long it would take to settle the score.

After a back-and-forth first half in which the Lady Lions landed the first-quarter blow before DC hit back in the second, it wasn’t until the third overtime expired that the Yellow Jackets finally walked off the court with a hard-fought 78-74 triumph that served as part one of an interesting twinbill at the Karl H. Weaner Center.

The white-knuckle, triple-overtime triumph boosted the Lady Jackets to 5-10 overall while pulling even at 4-4 in the HCAC.

“I feel really bad for Mount St. Joe because they don’t deserve to lose that game. They made plays all night long,” said Defiance head coach Allan King, Jr. “It was punch, counter punch … I didn’t know if we were gonna survive by the end.”

But the Jackets did survive and were standing at the final bell behind some late-game heroics, largely paced by the all-freshman crew of 5-6 guard Taylor Steinbrunner, 6-0 forward Briana Townley and speedy 5-3 point guard Nicole Sims, all of whose double-digit scoring totals helped extend the action well past regulation.

While Steinbrunner led the way with 21 points, Townley followed with 17 and Sims tossed in 12 points by game’s end.

Normally a silent scorer at the point, half of Sims’ tallies came by via a pair of very loud 3-balls in the fourth quarter to keep DC nipping at the heels of a gritty pride of Lions that were holding a lead between two and five points as the clock wound down. The freshman from Camden’s second triple of the stanza pulled the Jackets to within 62-61 with 46 ticks remaining in regulation before Steinbrunner iced a pair of freebies with two seconds left, setting up the first overtime with the score knotted at 63-63.

”I told them the other day, the freshmen have played too many minutes to consider themselves freshmen anymore at this point,” said King. “Nicole Sims knows how to run a basketball team. She gets us into our offense, she gets us into good stuff, she’s thinking the game, and she really did (today).”

In addition to setting up a clutch triple on an assist to Townley, Steinbrunner canned 5-of-5 from the foul line in the first overtime, with her last two giving the Jackets a hopeful 73-70 edge with 23 seconds showing.

Junior MSJ guard Maddie Haberthy quickly spun hope in the other direction, though, drilling one of her four 3-pointers just five ticks later to once again even the score and warrant yet another overtime period. Haberthy caused consistent headaches for Defiance, finishing with a game-high 29 points ahead of 18 from MSJ freshman Chloe Jansen.

}”Taylor Steinbrunner’s really been coming on the last couple weeks,” said King. “I think more than anything, she made some clutch free throws and got some people in foul trouble with her willingness to attack. My favorite thing about her game is the fact that on Wednesday night, she didn’t have a great game. She corrected the things that cost her not having a great game. She travelled a little bit, but came in on Thursday morning and worked with me on that. A credit to her for wanting to do that. She took care of the basketball the whole game for us today.”

And then there was Townley, the Paulding grad who came off the bench and went downtown to keep the Jackets hanging around.

}After a pair of Haberthy free throws extended an 80-77 lead and appeared to have the Lady Lions poised for the win with 18 seconds left in the second overtime, Townley methodically sidestepped a defender and found nothing but net from the perimeter for three, tying the game with six ticks left and bringing forth ...

”We’ve been waiting for that from Bri Townley. She’s more than capable of that,” said King of Townley, who also pulled down 10 boards for a double-double. “It’s hard as a freshman finding your way at a new place, but hopefully that’s her kind of coming-out party. She’s had a few of those games this year. Now we just need to get her that consistent opportunity and she’ll take advantage of it.

}”Toward the end, it was choppy two- or four-point runs at a time,” he noted. “I think they had two different five-point leads in different overtime periods, and our ability to fight back from that … maybe that’s a step in maturity for our young kids. That’s what we’re hoping.”

The third OT brought about a gutsy performance from another young Lady Jacket, this freshman guard Lexie Sparks. The Trenton native went a perfect 6-of-6 from the line, sinking four of those attempts in what was finally the final five minutes.

While those were Defiance’s only points scored down the stretch, Sparks’ last two that proved to be the game-winners came in the wake of a hard foul by Jansen that sent the MSJ standout to the pine with her fifth of the night. Obviously shaken from the collision, Sparks drained the ensuing freebies at the 3:22 mark and the Jackets held on for the win.

Mount St. Joe got things rolling early in the afternoon, with Haberthy scoring six points inside and sophomore Kamryn McCool lighting up the arc for a pair of treys in the Lions’ 21-13 lead after one quarter of play.

However, senior Liz Martin did her usual damage off the bench in the second, striking twice from long range while sophomore Nysha Speed chipped in an old-school three-pointer as the Jackets pulled to within 28-27 at the break.

”That’s the beauty of sports, you love it when kids step up,” said MSJ coach Dan Benjamin, whose Lions slipped to 4-11 overall and 3-5 in the HCAC standings. “Sometimes in society we only accept the things that they fail at and remember those.

”It’s always tough to play on the road, no matter who you are,” he added. “I’m proud of my team, they played hard. And I’m sure Allan’s proud of his team, they played hard. We both knew this was a pivotal game, and that’s the kind of games you want to play. Obviously, we’d want to be on the winning end … but unfortunately somebody does have to lose the game. That’s part of life.”

The Defiance College ladies will return to HCAC action on Wednesday against visiting Earlham (4-11, 3-5 HCAC), bringing a midway point to the conference schedule with a 7:30 p.m. tipoff.