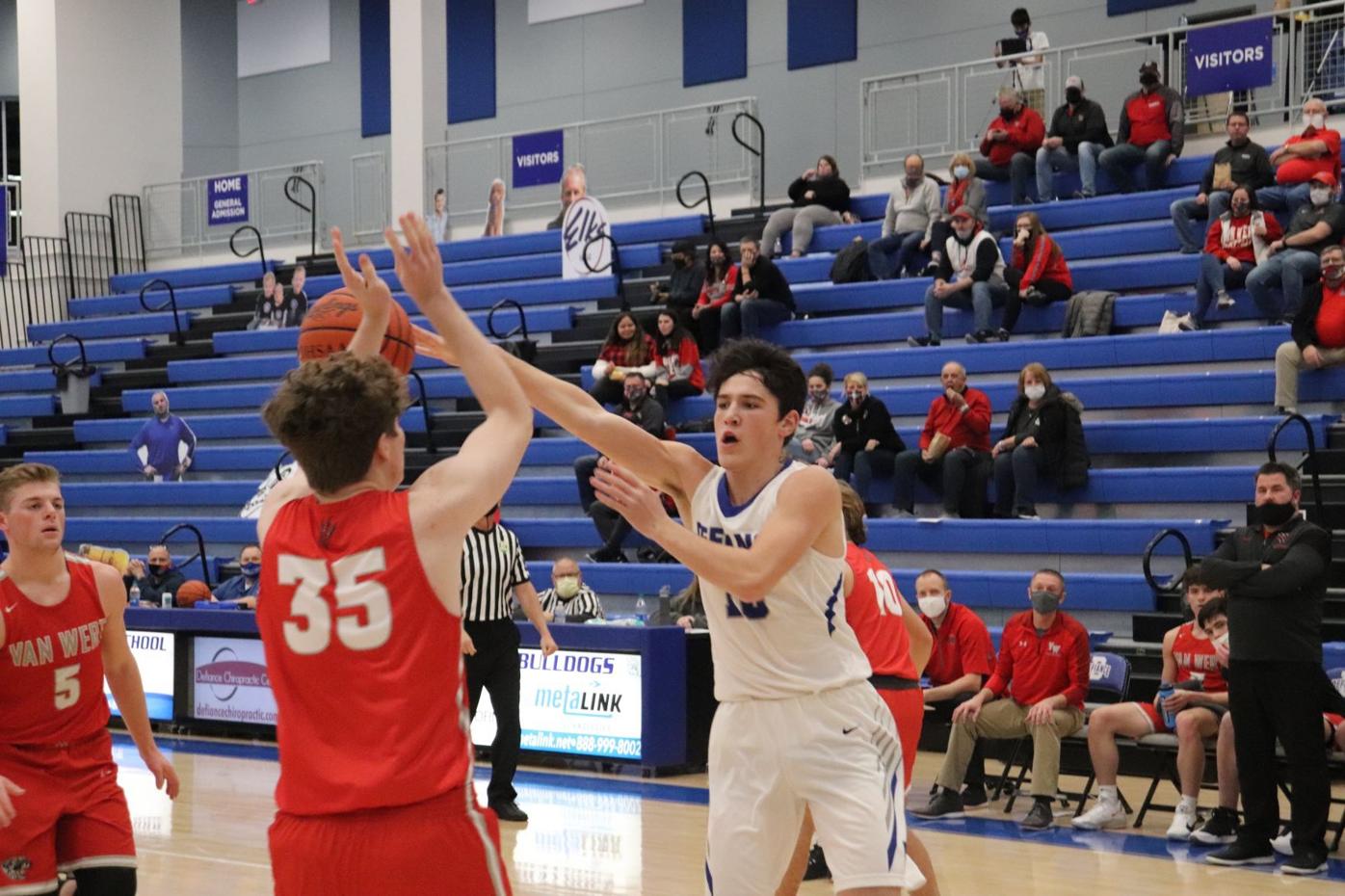 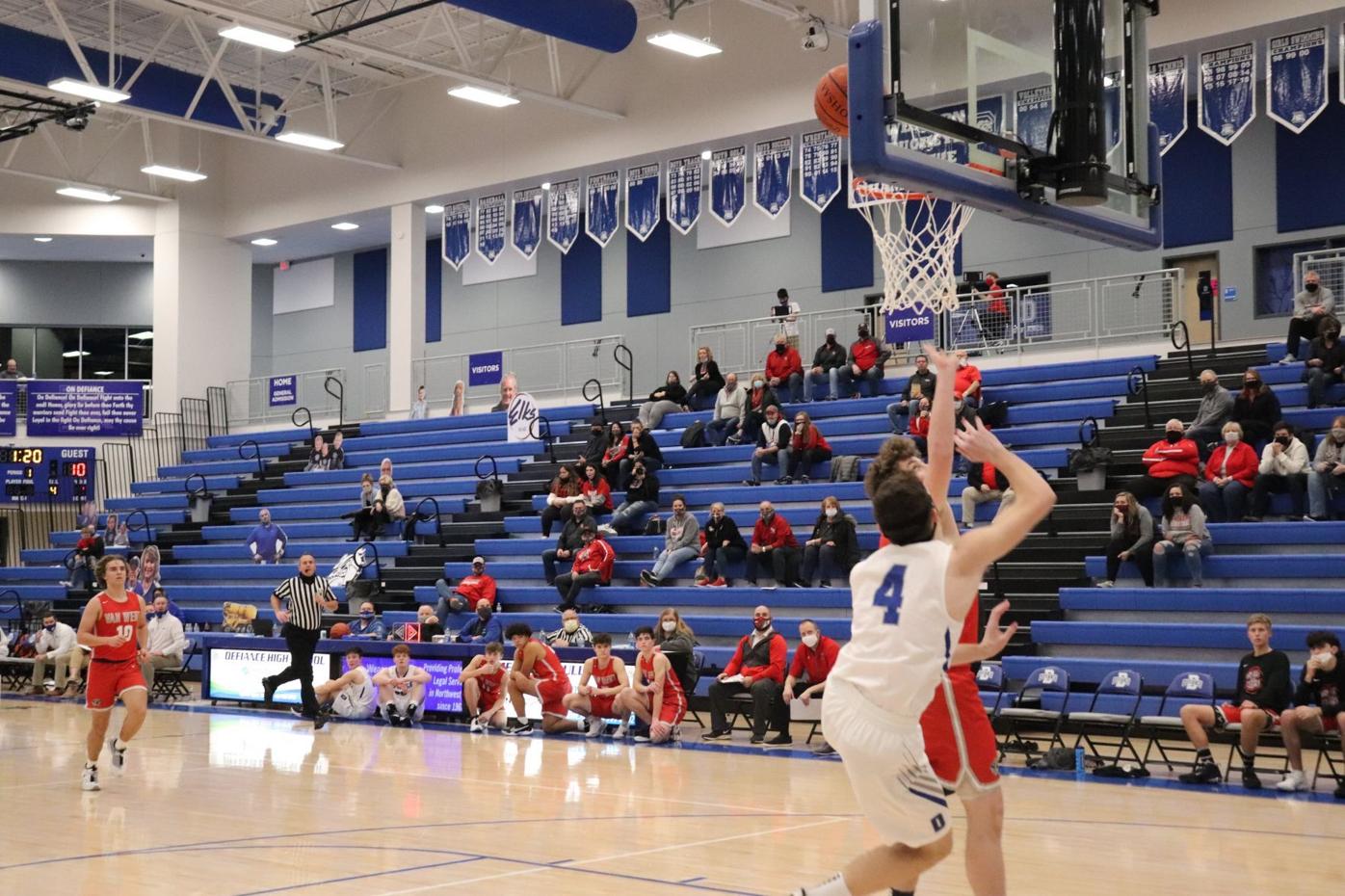 A 13-point lead after one quarter was enough for Defiance as the Bulldogs evened their season mark on Tuesday with a 53-46 home victory against Western Buckeye League foe Van Wert.

The contest, first postponed by the Cougars’ state championship football run and then postponed from Monday, Jan. 4, to Tuesday evening due to a COVID-19 case in the Van Wert program, saw the Bulldogs (5-5, 2-1 WBL) race out to a commanding lead after just eight minutes thanks to some nifty passing and tenacity to start the game.

From then on, the Cougars (0-7, 0-2 WBL) shifted into a higher gear defensively and held Defiance to just 30 points total over the final three periods.

“(Van Wert) didn’t come out with the same defensive intensity (in the first quarter) but in the second, third and fourth quarters, they ramped it up,” admitted DHS coach Bryn Lehman. “We were getting a lot of easy layups and did a tremendous job of getting into the post. They shored that up and started applying a ton of ball pressure.

“They may have made our lives a little bit more difficult but I’m proud of how our guys handled that pressure.”

The Bulldogs nailed 10 of 13 shots in the opening stanza, including three longballs and a pair of nifty plays by sophomore Isaac Schlatter on a no-look pass to David Jimenez and a layup.

Up double digits after one period, Defiance saw the visitors chip away with a quick six points as a pair of Ethan Brown free throws got things to single digits. DHS senior CJ Zachrich answered with a putback at the other end and guard Joe Lammers converted a layup to put Defiance up 29-16 with 3:46 until halftime.

The Bulldogs didn’t score for another three minutes as standout VW guard Owen Treece sparked a 6-0 run by himself on a steal and layup, a 3-pointer and a free throw to keep the Cougars in contention.

Sophomore Isaac Schlatter came up with a key 3-pointer to end the drought with 37 seconds left as Defiance went into the halftime break up 32-22.

The Bulldogs started strongin the second half as Zachrich nailed an open 3-pointer and Lammers converted a pair of freebies. Again, Van Wert had answers with buckets from Treece, Nate Jackson and Garett Gunter for a 6-0 run.

Ealry in the fourth quarter, a CJ Zachrich layup put the Bulldogs up 43-32 with less than seven minutes in regulation and in solid position to salt away a win.

Van Wert still had plenty to say about the result, as a Nate Jackson runner and a trey from Treece sandwiched a Bradyn Shaw layup for Defiance and the Bulldogs’ advantage was in danger at 45-39 with 4:31 left.

Following makes at the line from Zachrich and Lammers and a layup from Schlatter, Nate Jackson converted from long range again to cut the lead to eight with 2:06 remaining. Following a DHS turnover, Treece split a pair of free throws to make it a 50-43 ballgame with 1:42 in regulation.

Defiance gave itself a bit more work down the stretch with misses on the front end of consecutive one-and-one situations but a pair of missed treys and a turnover by Van Wert helped preserve the advantage and the Bulldogs bounced back from a disappointing showing Saturday against Wauseon.

CJ Zachrich finished with 13 points to lead the DHS scoring while Schlatter and Cayden Zachrich both netted 11. Zachrich netted eight of his 11 in the first quarter and finished with a double-double thanks to 10 rebounds.

“Not many people give (Schlatter) the credit that he deserves,” lauded Lehman of the sophomore’s efforts. “Coaches see it, see what he means and he’s a catalyst. He does everything well and he’s always in the right spot.

“It’s been a roller coaster. We’re every other game right now and we’ll see if we can change the trend on Friday. It was big to get off to a great start and we were able to weather the storm tonight.”

Treece finished with 19 points for the Cougars while Nate Jackson added 11.

The Bulldogs return to action Friday in Western Buckeye League action at Elida (1-8, 1-2 WBL) before hosting Fairview (4-2) on Saturday. Van Wert will host Ottawa-Glandorf on Friday and Bryan on Saturday.