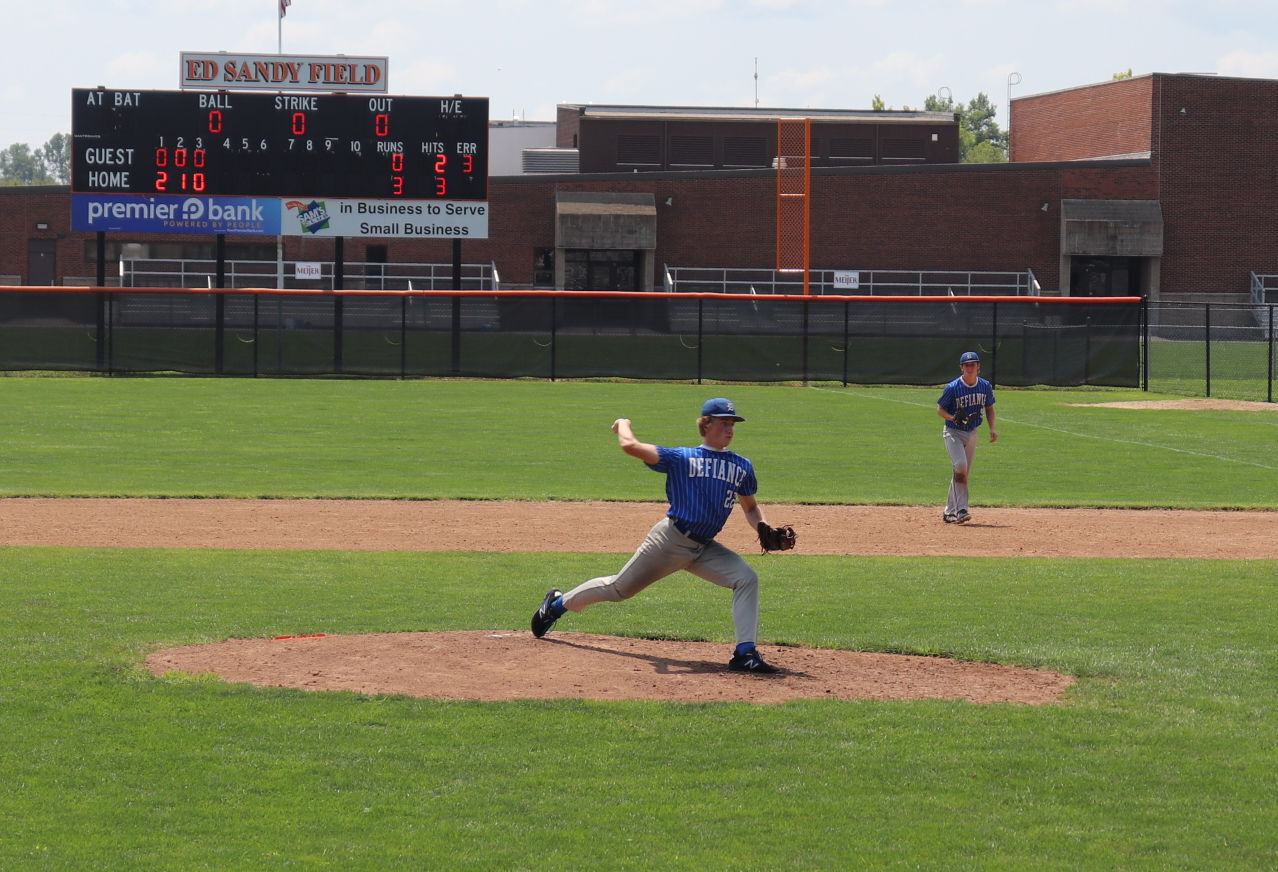 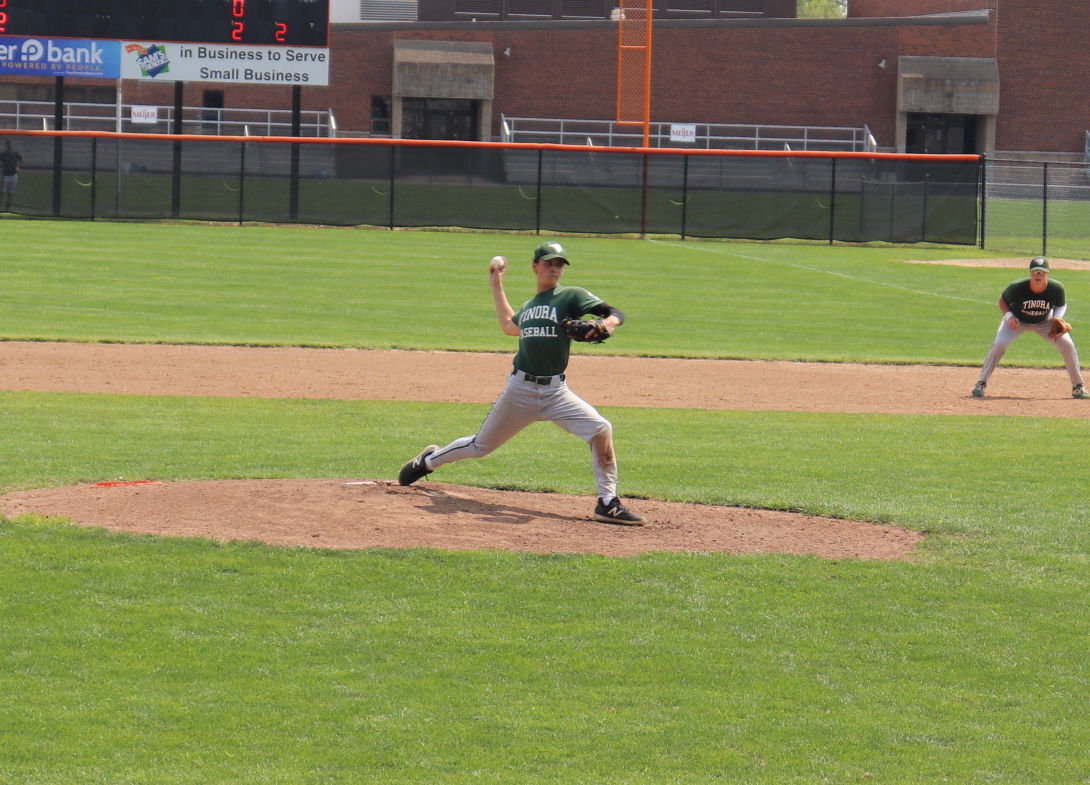 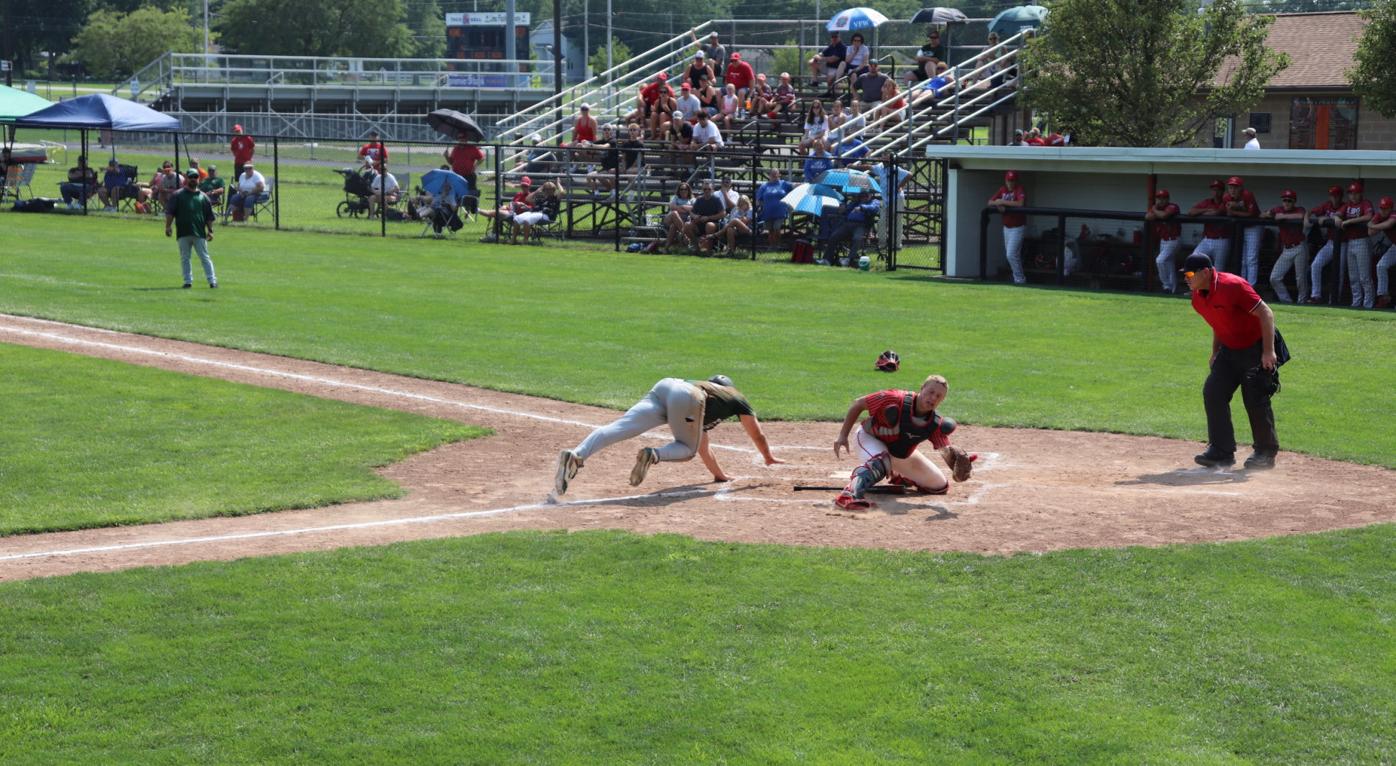 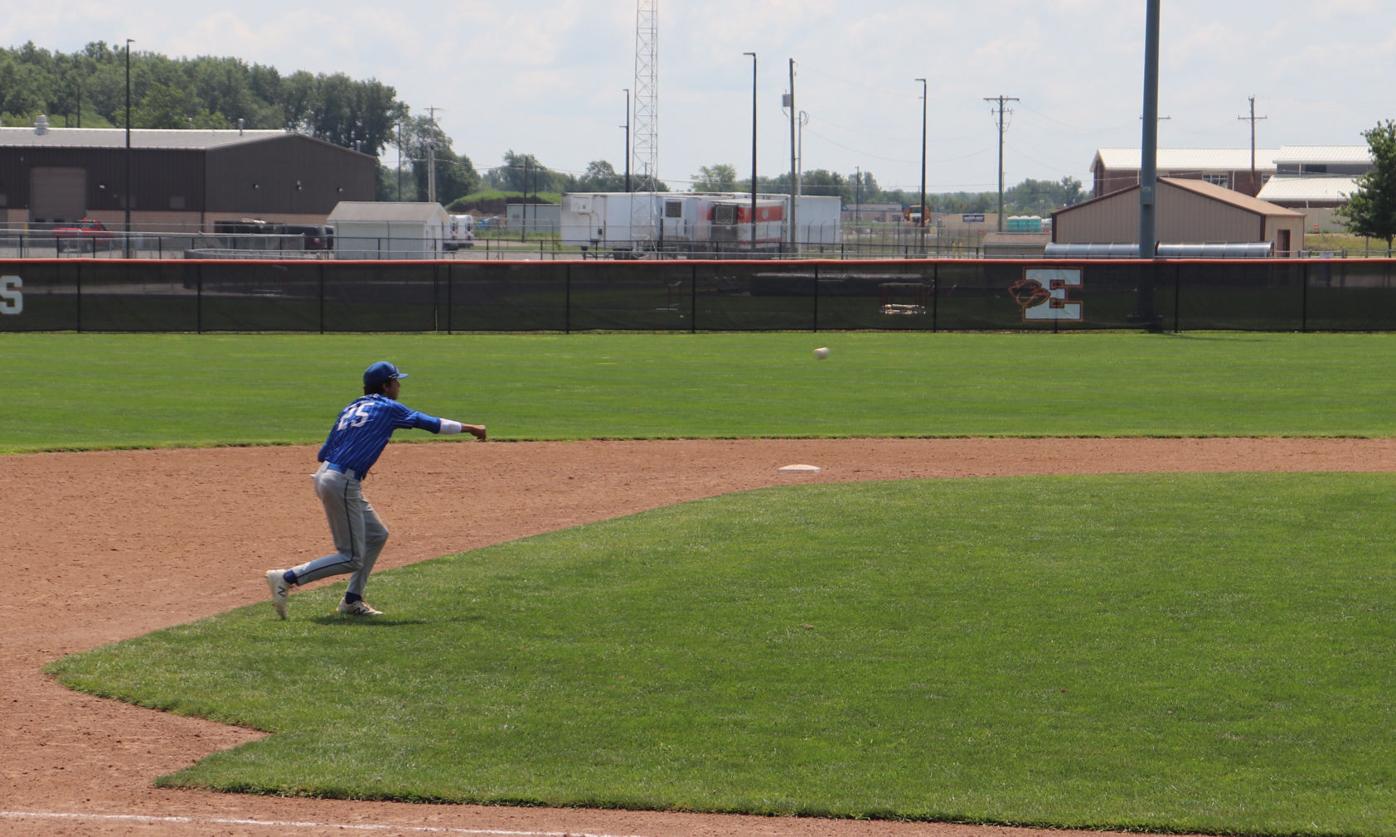 ELIDA — Both Defiance and Tinora staked early two-run leads in the first inning of their respective ACME state tournament matchups at Ed Sandy Field in Elida on Sunday afternoon.

Turns out one would have been enough.

In the second game of a four-game slate, Defiance’s Jayden Jerger struck out seven in a three-hit shutout as the Bulldogs blanked Perrysburg 4-0 before Tinora righty Jayden Bergman turned in a crafty three-hitter of his own in the Rams’ 5-0 shutout of St. Henry.

The wins propel the Bulldogs (19-4-1) and Rams (22-2) into the tournament semifinals Monday evening at Elida at 3 and 5 p.m., respectively. Defiance will take on Van Wert (19-2) in the opening game of the twinbill before Tinora competes against Versailles. The two semifinal victors will advance to the ACME state championship game Tuesday at 6 p.m.

In the early contest, the Bulldogs got things going quickly in the first at-bat of the afternoon with a seeing-eye single through the infield from leadoff man David Jimenez. On the very next at-bat, senior Wade Liffick ripped a triple to right field to put the Bulldogs on the board 1-0 before Bradyn Shaw scored Liffick on a groundout to double the lead.

Junior Aidan Kiessling made it back-to-back leadoff knocks and came around to score following a perfect sacrifice bunt from Jerger, a groundout and a wild pitch.

That advantage was more than enough for Jerger, who allowed just four baserunners the entire game and only had one get past first base in a gem of a shutout.

“He had good command of his stuff today, he got ahead early in the game and got some called strikes off the curveball,” said Defiance coach Rob Held of the outing from Defiance’s ace. “That gives you confidence that you can throw that for strikes and then we made some plays (behind him).

“It’s always easier when you score runs early and you put some pressure on them and when you’ve got an ace like Jayden … I’ve said it all spring, you give Jayden, or even Bradyn Shaw who’s going tomorrow, a couple runs, we should win the game.”

Defiance got an insurance run in the fifth inning as David Jimenez legged out two bases on a dropped ball in the outfield on a sliding catch. A sac fly later, Shaw came up with his second RBI of the day via a run-scoring knock through the infield.

An error in the sixth by Defiance allowed a Perrysburg runner but was promptly wiped out by a double play from Kam’Ron Rivera to Shaw to Liffick to end the threat. Even after a Jack Borer single in the seventh for a last-gasp two-out effort from the Yellowjackets, Jerger reared back for his seventh strikeout of the day and second of the inning to close the book on the Bulldogs’ first ACME state tournament game since 2018.

“My thought all along was that if we could get the lead, we were going to play for runs,” added Held of the tourney-opening triumph for the Bulldogs, which are chasing their first ACME tournament title since 2014. “Like I said, you get Jayden a couple of runs with the way he pounds the zone, this dfense is tremendous. We make plays and it makes it easy.”

In the late contest, Tinora had no plans on a slow start in the ACME program’s first-ever trip to the state tournament. Bergman, a senior-to-be, allowed a pair of two-out walks in the first inning but escaped the jam with a strikeout and hit consecutive batters with two outs in the second but again wriggled free with a groundout.

Meanwhile, the Rams got a spark with two away in the opening frame as junior Teron Ward laced a hit just inside the third-base line for a double before junior Eli Plassman powerd a double deep to left-center field to score Ward and Dalton Wolfrum.

St. Henry’s baserunners in the first two frames was as close as the Redskins got in the way of a scoring threat for the next three frames as Bergman retired the side in the fourth and sixth, stranded a runner in the third and saw three batters in the fifth, thanks to catcher Tyler Wiemken picking off Redskin baserunner Kellen Hoying after a leadoff single.

Tinora picked up insurance runs in the third on an RBI single from Ward, in the fourth via an error that scored Casen Wolfrum and in the sixth when the Rams loaded the bases on two singles and a walk before Bergman himself was plunked with the bags full to put the Rams up 5-0.

The top of the seventh was the final threat for the Redskins as Bergman entered the frame with over 100 pitches. The crafty righty shook off a leadoff single as Wiemken picked off another runner before Bergman issued back-to-back walks. With seven pitches before the 125-pitch limit, Bergman threw three pitches to Bryce Brookhart but his grounder got past Wolfrum to load the bags.

The senior righty was unshaken, inducing a flyout to second base with three pitches to spare and preserving the shutout and a historic summer run.

“I didn’t want to take the ball from him (before the Brookhart at-bat),” said Tinora coach Doug Plassman on Bergman’s marathon effort. “He deserved to finish this game as well as he pitched. You’ve got to dig deep at that point in time and say this is your game. He kept them off balance and it’s huge. JB’s come around all summer long for us and pitched extremely well today.”

Ward and Casen Wolfrum each recorded a pair of base hits in the win for the Rams, which rallied from early deficits in district-clinching wins over Wauseon and Miller City but didn’t need comeback magic on Sunday.

“It was such a complete game for us,” said Plassman of the all-around effort on the afternoon for Tinora. “We hit the ball in the first inning and got up on them and then key spots throughout the day, Teron Ward had a couple singles there in left field. We hit when we needed to hit and fielded when we needed to field.”