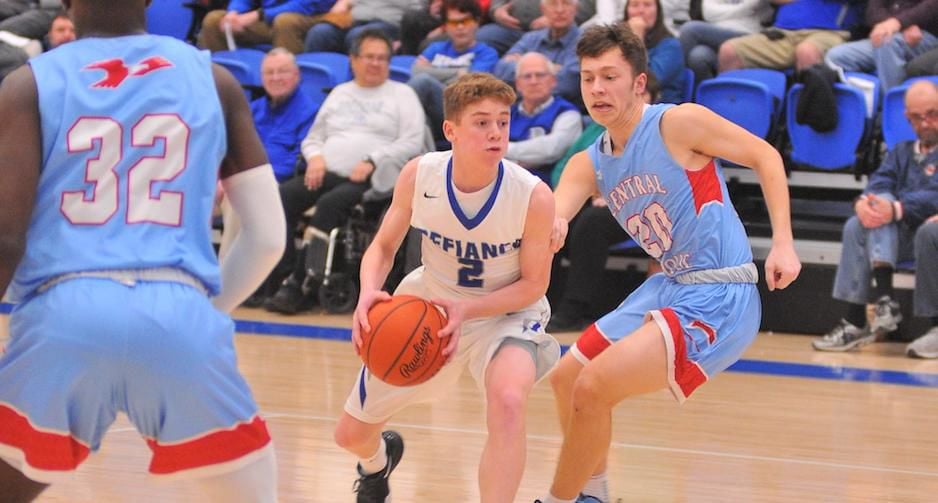 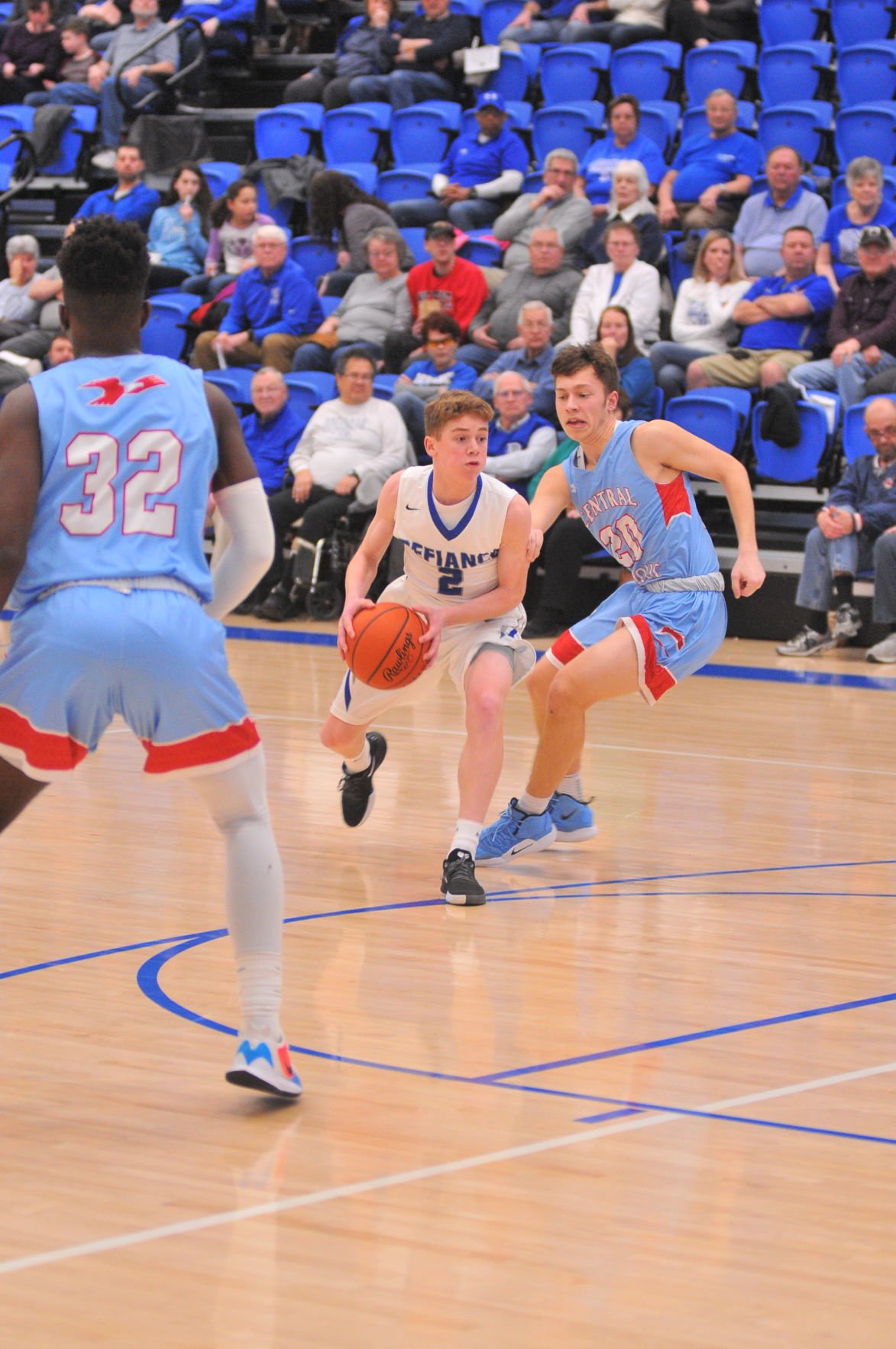 Defiance’s Bradyn Shaw dribbles past Lima Central Catholic’s Ross Otto on Saturday night. The Bulldogs will shift their focus to the sectional tournament and a matchup with the winner of Van Wert or Wapakoneta.

Defiance’s Bradyn Shaw dribbles past Lima Central Catholic’s Ross Otto on Saturday night. The Bulldogs will shift their focus to the sectional tournament and a matchup with the winner of Van Wert or Wapakoneta.

With the grind of the regular season complete, the next chapter in the journey of every area basketball player can finally tip off as the postseason is set to begin across the state with all roads leading to the state tournament at the Schottenstein Center in Columbus on March 19-21.

In Divisions II, III and IV, sectional hoops began Tuesday and will continue through the week as teams that finished the season strong get the chance to prove their mettle and back up their record while squads that may have struggled at times get a clean slate and the chance to make some into believers.

Any possible road to Columbus in Division II for the area likely will come through the always-treacherous path through the Ohio Northern District.

With the state’s No. 1 team in Lima Shawnee on one side and a trio of 15-plus-win teams on the other, escaping to regionals is no easy task.

For Defiance, the journey will begin in the sectional finals on Friday at Paulding High School. The Bulldogs (15-7) shook off a league loss to St. Marys Friday with a senior night victory at home against Lima Central Catholic to enter the postseason on a high note.

“I think it helps a little but the tournament’s a whole other animal,” noted DHS coach Kirk Lehman of any boost from the LCC victory. “When we won state (in 2015), we lost our last game of the regular season by 27 points. It’s all about a mindset and how you reload.”

An intriguing matchup awaits the Bulldogs as 8-14 Van Wert and 7-15 Wapakoneta will tussle tonight at 7 p.m. to earn the right to face Defiance in the sectional finals. Defiance picked up a 51-41 road win over Van Wert in both teams’ WBL opener on Dec. 13 but struggled on the road on Valentine’s Day against Wapakoneta, falling 42-38 on an ugly shooting night (15-of-49, 6-of-26 in the second half).

Regardless of opponent, the Bulldogs are looking for a better effort.

“We found out how good our league is this year, when we won 15 games and went 4-5 in the league,” noted Lehman. “Anybody can win or lose on a given night, you’ve got to be ready to play.

“(The main focus) is just our execution. We’ll work really hard Monday, Tuesday, Wednesday on executing offensively in our halfcourt sets. Both Wapak and Van Wert play very good man-to-man defense. Once we know on Wednesday who we play, we’ll put in the game plan and get ready for Friday night.”

On the other side of the Paulding Sectional, Bryan (15-7) will have an intriguing matchup of size with 6-8 Reese Jackson and 6-6 Titus Rohrer matching up on the post with 19-3 St. Marys and its twin towers of 6-6 senior Ethan Steger and 6-8 freshman Austin Parks.

On the other side of the district, Lima Shawnee awaits either Napoleon or Celina in a sectional final at Lima Senior on Friday at 6:15 p.m. Meanwhile, Wauseon, which navigated a tough non-league slate and an always-tricky NWOAL to a 16-6 regular-season mark, also earned a first-round bye with its seeding.

Chad Burt’s Indians will match with either Kenton (12-10) or Elida (7-15) in an 8 p.m. tilt Friday at Lima Senior. Coincidentally, Kenton and Elida faced off on Friday in a league finale, which went to Kenton 67-62 in overtime.

After a season competing in Division III’s Lima Senior District, Archbold moves back north for the 2020 postseason to the Toledo Central Catholic District and is the second seed in the district behind 21-1 Evergreen following a 16-6 regular season.

The Bluestreaks’ unbeaten season a year ago was toppled in the district semifinals by Coldwater but Archbold has refocused and have eyes on another shot at tournament glory in head coach Joe Frank’s second season at the helm.

The Streaks will take on either Swanton (8-14) or Montpelier (5-17) in a sectional final at Wauseon while Ottawa Hills awaits either Liberty Center or Genoa in its respective sectional title tilt at the home of the Indians.

At Springfield, Evergreen’s outstanding season will continue with a potential marquee matchup with defending regional champion Cardinal Stritch looming in a district final next week, should both teams reach that far. The Vikings (No. 12 D-III), winners of 21 straight, will try to keep up the magic following the program’s first-ever outright NWOAL championship with a sectional title tilt Friday at Springfield against either Van Buren or Otsego. The Vikings outlasted Otsego 69-67 in double-overtime on Dec. 7 but did not face Van Buren during the regular season.

In the Lima Senior District, hardwood blue-bloods will take the court at Miller City and Elida for sectional action, headlined by the No. 3 team in Division III, the 21-1 Ottawa-Glandorf Titans.

12-10 Tinora will match up with Blanchard Valley Conference co-champion Mount Blanchard Riverdale (15-7) in a D-III sectional semifinal at Miller City at 8 p.m., following a matchup between Liberty-Benton and Coldwater at 6:15 p.m.

On the other side of the bracket, the Elida Fieldhouse will host a trio of local squads, with third-seeded Wayne Trace earning a first-round bye.

The Raiders, which have competed in the Division III and IV postseason over the past few decades, certainly know how the intensity ratchets up around playoff time.

“If we’d have been D-IV, there’s five, six teams that have been ranked in the state and in D-III there’s some perennial powerhouses like LCC and O-G,” said WT head coach Jim Linder. “There’s a lot of good teams, this year there’s a ton of good teams. If we’re fortunate to get past Fairview or Jefferson then you run into an LCC or a Bluffton, both of which are playing very well.

“The Division III tournament is more physical and teams are quicker, you run into some really quality teams. You have to up your game.”

The 16-6 Raiders have certainly been battle-tested with losses to unbeatens Columbus Grove (No. 1 D-IV) and Antwerp (No. 3, D-IV), D-II Bryan, a 15-7 Kalida squad and to a red-hot Ottoville team (19-3) in the regular season finale.

The Raiders’ fate in Friday’s sectional final at Elida will be against either GMC foe Fairview, which WT defeated 66-44 on Jan. 24, or Delphos Jefferson, which the Raiders topped 56-49 on Jan. 11.

Districts across the Northwest Region will have plenty of marquee matchups to promote with the state’s No. 1, No. 3 and No. 9 teams in Division IV hitting the hardwood in local tilts.

At Napoleon, the 22-0 Antwerp Archers, outright GMC champs for the first time since 2010, picked up a first-round bye after completing an unbeaten and dominant run through the regular season. With the pressure off and a cliche of an 0-0 record entering the postseason, the Archers hope to enter the tournament relaxed.

“As it got close to the end of the season, there was maybe a little bit of added pressure when we got to that point,” admitted Antwerp coach Doug Billman. “We truly had a one-game-at-a-time mentality and our kids and coaches did a good job of staying in the moment.

“It’s time to move forward and get back to work again. The most important game is the next one and we have to be ready to prepare.”

Though the Archers played five Buckeye Border Conference teams, only Hilltop and Edon would be potential rematches in the postseason. Antwerp will take on either the Cadets (2-20), a team they beat 77-29 on Feb. 15, or 5-17 Stryker on Friday at 6:15 p.m. at Napoleon.

The other sectional semifinals tonight match up Maumee Valley Country Day and Edgerton while Edon and Pettisville will complete a BBC trilogy at 8 p.m., with Pettisville having taken the previous two league meetings in the regular season.

At Bryan High School, No. 9 Toledo Christian (20-2) earned the second seed in the district and with it, a spot in the sectional finals against either Emmanuel Christian or Holgate.

Tonight’s GMC rematch between Hicksville and Ayersville will steal the show in semifinal action as the 15-7 Aces will try to back up a 46-32 regular-season win over the 9-13 Pilots with a potential postseason victory. The winner of the Hicksville-Ayersville contest will take on the survivor of another conference reboot in the postseason with Fayette and North Central facing off tonight.

The Elida District will also provide some intriguing rematch possibilities with a pair of Putnam County powerhouses leading the charge. The top-ranked Bulldogs of Columbus Grove will get things going at Bluffton University’s Sommer Center, awaiting either Ada (9-13) or Fort Jennings (3-19) in a Friday sectional final at 8 p.m.

Ada gave the Bulldogs a major scare in the season finale, leading unbeaten Grove through three periods before falling short. A battle of 11-11 squads in Crestview and Leipsic will meet up at Bluffton tonight at 6:15 p.m. ahead of the Ada-Fort Jennings tussle, with the winner taking on Delphos St. John’s on Friday.

At the Cougar’s Den in Van Wert, Ottoville will take a 14-game win streak into the postseason as the Big Green enter at full strength following injuries early in the year to stars Josh Thorbahn and Ryan Suever. A Putnam County League rematch awaits the Green and Gold, with either Continental (58-21 Ottoville win, Feb. 20) or Pandora-Gilboa (57-34 Ottoville win, Jan. 11) awaiting Friday’s sectional final.

Kalida and Patrick Henry will do battle in a sectional semifinal tonight at 6:15 p.m. at Van Wert with Kalida entering the postseason on a six-game win streak of its own and a run of 13 wins in 15 games after a 2-5 start to the year.

Lincolnview and Miller City will both vie to move their 11-11 marks over .500 with a tournament triumph, advancing to Friday’s 8 p.m. sectional final with an 8 p.m. semifinal tonight.