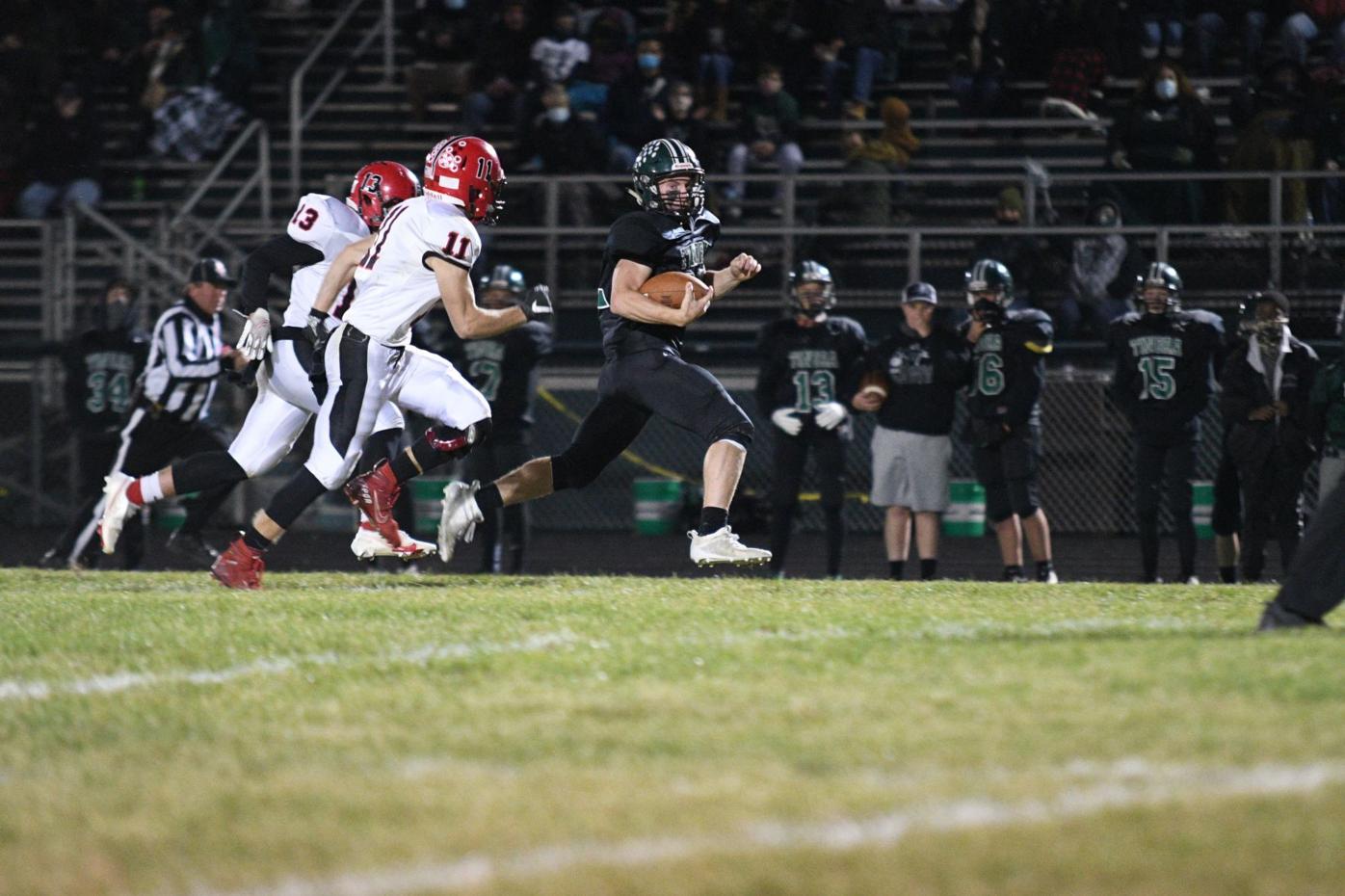 Tinora running back KP Delarber (right) pulls away from Hicksville defenders Brody Balser (13) and Kyler Baird (11) during Saturday’s Division VI playoff game at Justin F. Coressel Stadium. The Rams won the rematch of the GMC and county rivals, advancing with a 34-13 victory. 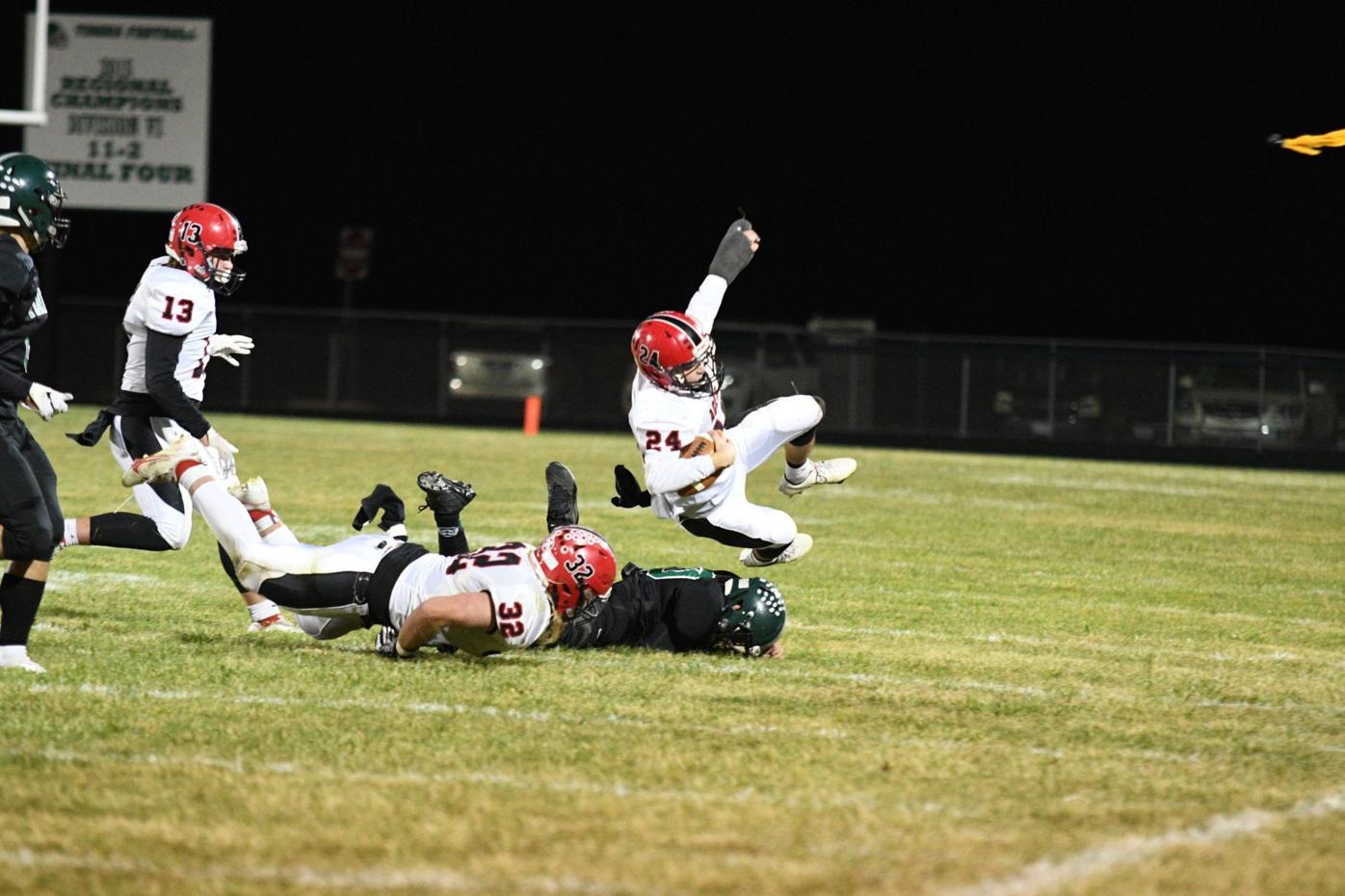 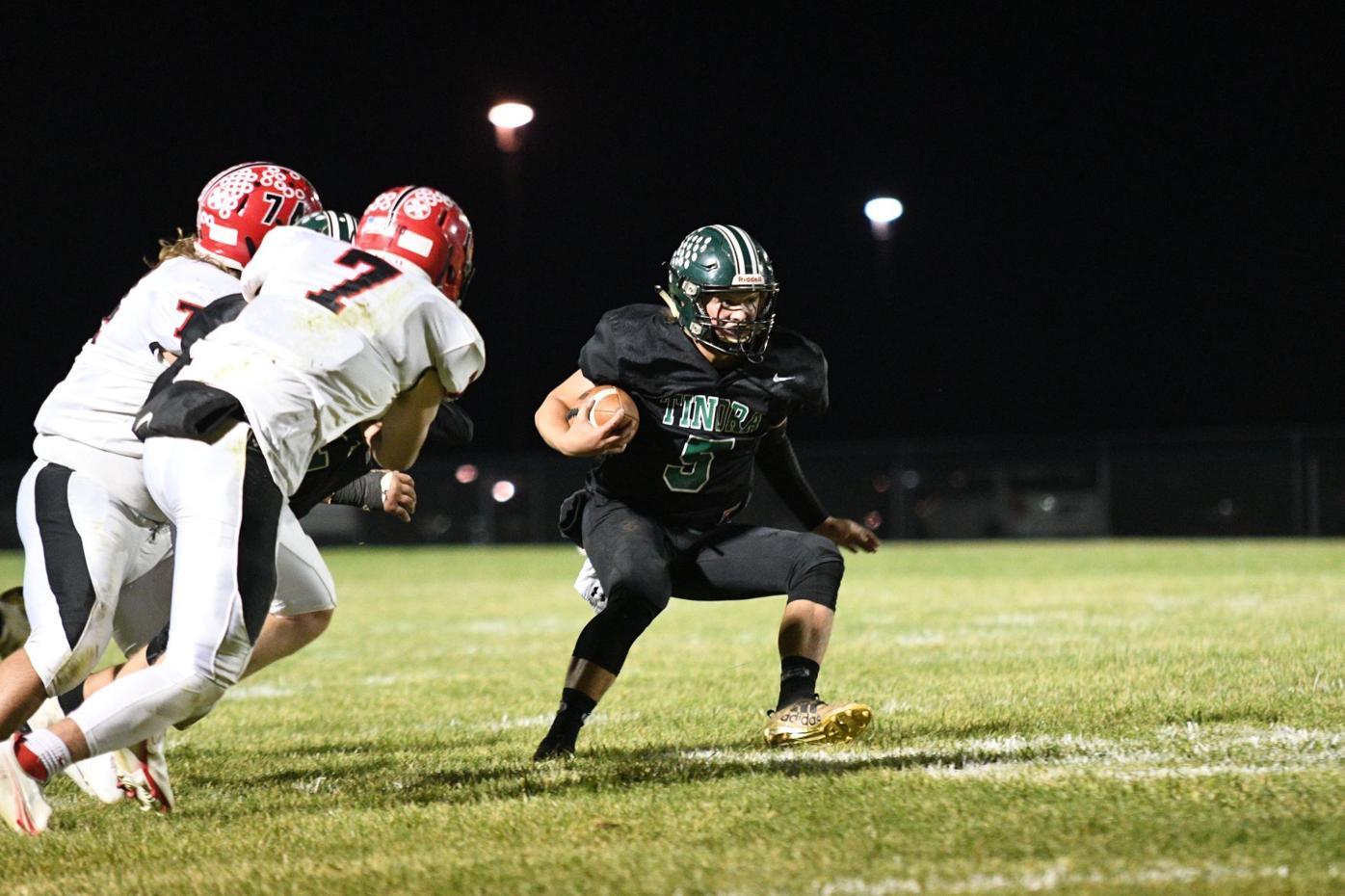 Tinora running back KP Delarber (right) pulls away from Hicksville defenders Brody Balser (13) and Kyler Baird (11) during Saturday’s Division VI playoff game at Justin F. Coressel Stadium. The Rams won the rematch of the GMC and county rivals, advancing with a 34-13 victory.

Through two quarters on Saturday at Justin F. Coressel Stadium, Hicksville had Tinora right where they wanted them.

A well-executed drive in the closing seconds after a Ram interception led the Aces to a 7-7 halftime tie with the hosts after falling 41-0 in the regular season.

The unbeaten Rams turned it on in the final two quarters, stifling Hicksville in a 34-13 Division VI Region 22 second-round playoff game to advance in the postseason.

Tinora (6-0) held Hicksville to just 13 offensive plays, 33 total yards and less than five minutes of possession time in the second half while outsourcing the Aces (4-4) 27-6.

“We left a lot of points out there, we had a lot of mistakes,” said Tinora coach Kenny Krouse of the win, which propels the Rams to a trip to Columbus Grove (7-0) on Saturday, Oct. 24 in a regional quarterfinal. “Give (Hicksville) credit, it’s not easy to beat a team twice and they did a nice job.

“We had some positives offensively and defensively, it was just tackling better. They hadn’t hurt us too much there, so we didn’t make too many adjustments at halftime. We just tried to take care of ourselves and clean a couple things up.”

“Our turnovers killed us tonight,” said Hicksville coach Lucas Smith. “I thought our defense played really well (in the first half), but (five) turnovers, two blocked punts … if you told me that was going to happen before the game, i’d have told you it would be 50-0 or something. It’s a testament to how much better our kids have gotten and their resilience.”

The two starring efforts for the Rams came from a veteran in junior halfback KP Delarber and a newcomer in freshman linebacker Grady Gustwiller.

The former racked up 126 of his 152 rushing yards in the second half, including three touchdown runs, while the latter was a special teams maven, breaking through the middle of the line to block two Hicksville punts.

“We just executed really well,” said Delarber, who rushed for scores from 44, six and nine yards out in the Ram triumph. “Our line blocked well, our defense looked really good and everything was working.”

“He’s a quality back and we’ve had many at this place,” lauded Krouse of the junior back’s efforts. “He’s earned his right to share that load. I’m really proud of the way he’s handled things.”

Things got off to a rocky start as a fumbled pitch derailed Tinora’s opening drive, Hicksville lost a fumble on its second play from scrimmage and Tinora’s next play saw a 37-yard TD run called back on a holding penalty and leading to a turnover on downs.

Tinora finally made a miscue count midway through the first period as Ram tackle Bryce Bailey recovered a Hicksville fumble at the Ace eight yard line and the offense finally broke through with a Christian Commisso TD dive to go up 7-0.

Both teams traded punts and the Aces saw a promising drive reach midfield before being forced to punt. That’s where Gustwiller, a 5-9, 150-pound freshman, took his chance to shine and raced through a gap to block Kole Wertman’s punt at the Aces’ 46.

Hicksville’s defense stood tall, however, and forced a punt but was unable to take advantage and booted the ball back to Tinora with 2:46 left in the half. The Aces defense countered with a Landon Turnbull interception at the Hicksville 38 that the do-it-all senior returned into Tinora territory.

Despite having just 38 seconds to work with, the Aces made plays when they needed to and a 28-yard completion from Turnbull to Boston Hootman got Hicksville to the Tinora eight with three ticks left. Turnbull then rolled right on a play-action pass and found Wertman for an eight-yard TD pass to tie things up at the gun.

From then on, however, it was all Rams, all the time.

Hicksville’s first drive of the second half ended with Gustwiller making a nearly identical play to his first-half block with another snuff-out of a Wertman punt.

“It was really exciting,” said Gustwiller of the special team spark. “For me, it was just about doing the best I could and try to get a block and make a play on special teams.”

Tinora made that count with a six-play drive that ended with a well-executed play-action pass from Schafer to Cole Anders but Hicksville again had an answer. On the ensuing kick following the Anders TD, Kole Wertman raced 70 yards right up the middle of the field nearly untouched for a kick return touchdown to make it 14-13 following a missed PAT.

The Aces never saw the scoreboard change on their side again.

The Rams made it a two-possession game with a 12-play scoring drive to go up 21-13. Hicksville threw an interception on its very next possession and then, after forcing a punt, lost a fumble at midfield to set up another scoring drive capped by Delarber.

“We’ve got a very special opportunity, we get to go see a great venue (at Columbus Grove),” added Krouse. “They’re a very, very good football team with a borderline Division I athlete at quarterback so we’ll have our work cut out for us.”

Tinora will travel to Clymer Stadium at Columbus Grove for the first-ever meeting between the two programs on Saturday. Hicksville was originally slated to play Convoy Crestview Friday, but with the Knights still competing in the D-VII postseason, the Aces will travel to Edon.