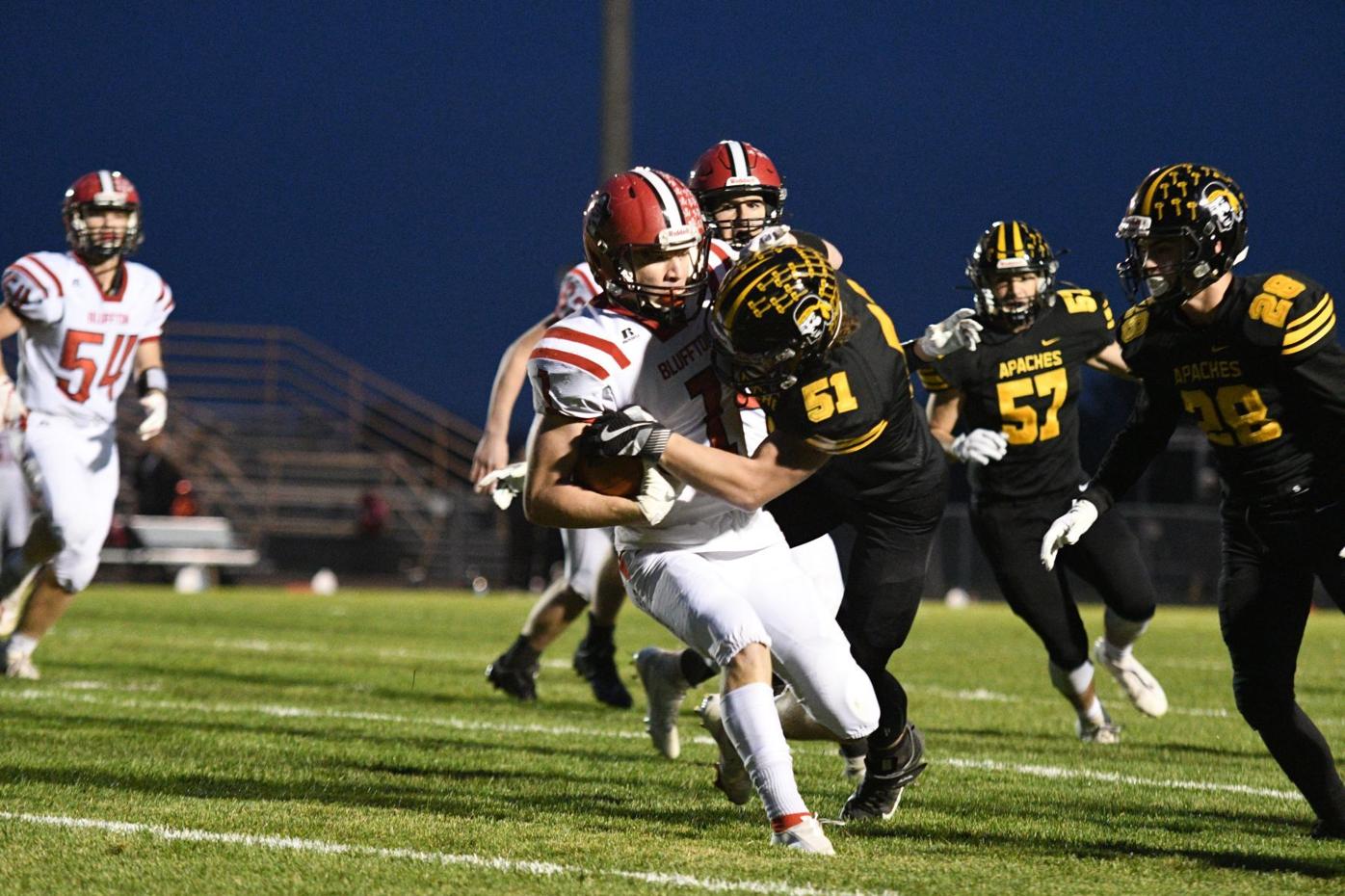 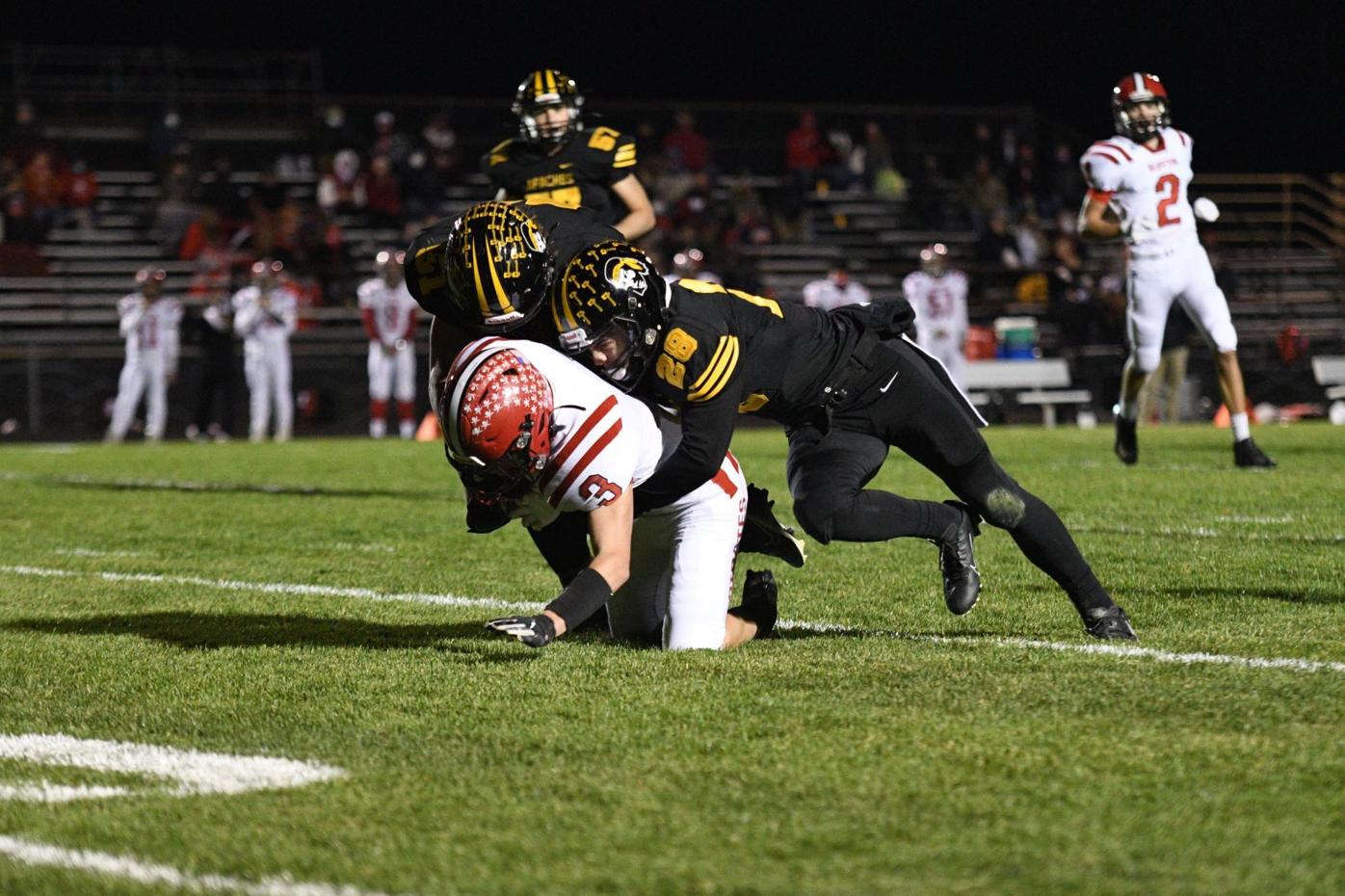 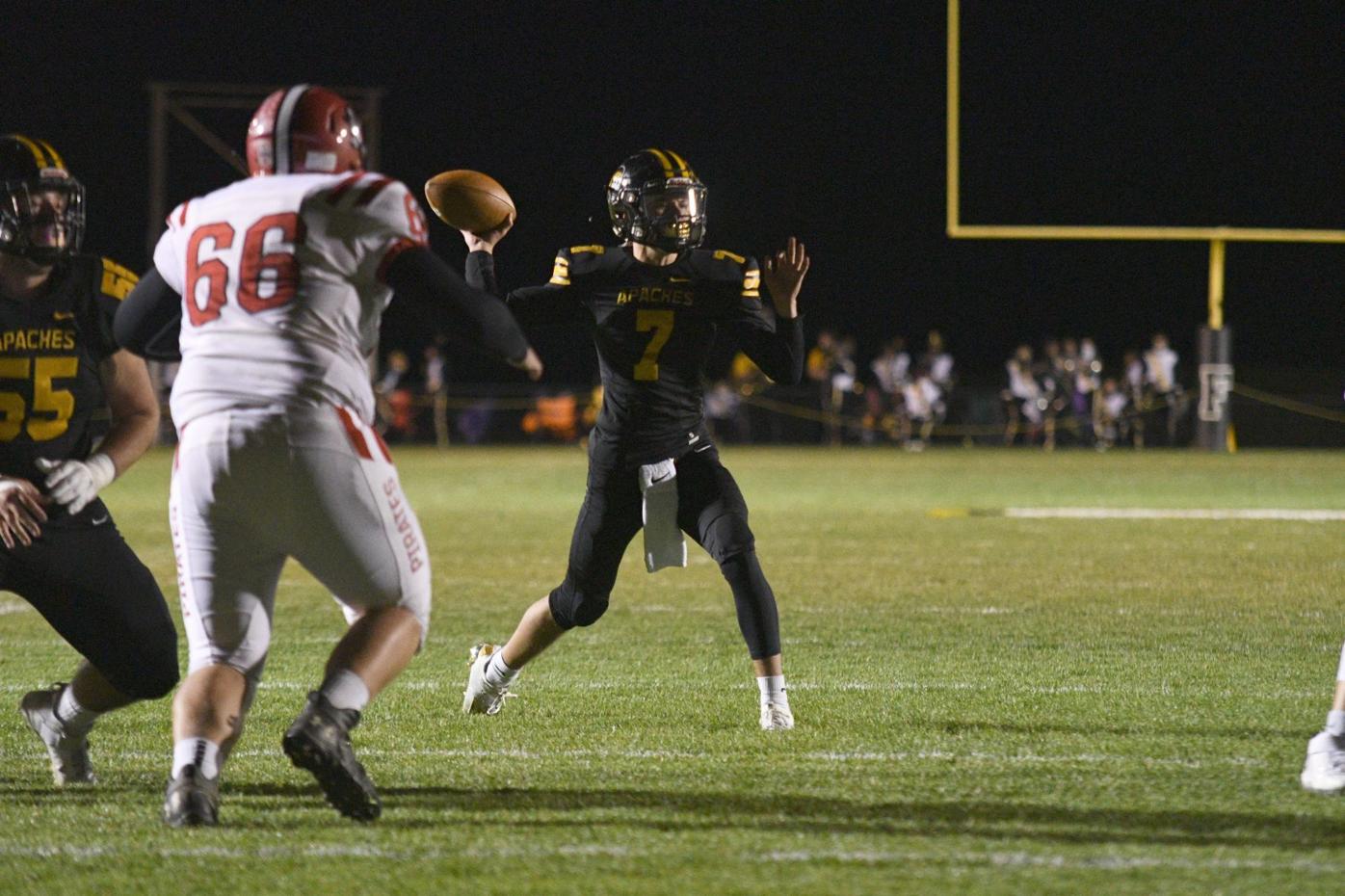 That is what Fairview showed visiting Bluffton Saturday night in the Division VI, Region 22 playoffs as the Apaches led 14-0 after one quarter and cruised to a 67-6 win in their playoff opener.

The win propels the 7-0 Apaches into the the Region 22 quarterfinals against 7-0 Northwood on Saturday at 7 p.m. at Defiance High School’s Fred J. Brown Stadium.

While the offense is highly regarded and known to be very potent, it was the Apache defense that set the tone in Saturday night’s battle against the Pirates.

The Black and Gold (7-0) forced Bluffton into punting after three-and-outs on each of the first three possessions and completely dominated the Pirate offense. After one quarter, Bluffton (4-3) had one yard of total offense through 14 plays.

“I thought both our offensive and defensive line did a really good job of controlling the line of scrimmage tonight,” noted Apache head coach Doug Rakes following the contest. “Our defensive line was able to get some penetration and they made plays for us. Those guys up front do not get enough credit for what they do and they played well tonight.”

While the Apache defense was doing its part, the offense did as well.

Although the first possession ended with a turnover in the end zone, it did not take long for Fairview to get on the scoreboard.

Starting its second drive at the Bluffton 35, the Apaches quickly moved towards the goal line with a 34-yard pass from Doug Rakes to Cade Ripke setting Fairview up at the one-yard line. Caleb Frank then took the direct snap and plunged into the end zone on the next play for a 7-0 Apache lead.

The Apaches had to go a little further on their next possession, starting at the Bluffton 44 after another stop by the Fairview defense.

Doug Rakes hooked up with Kaden Blair for 21-yards before finding Frank for nine more to the Pirate 14. Following a holding penalty and a sack, the Apache signal caller again hooked up with Blair for seven yards before back-to-back tosses to Luke Timbrook netted four and nine yards to the Bluffton one. From there, Timbrook carried into the endzone for a 14-0 lead after one quarter.

“I thought our kids came out focused and ready to play,” stated the Apache head coach. “We had a good week of preparation and some time to work on the little things which I think helped us. We used the bye week to work on fundamentals and fine tune some areas and the kids did a good job of executing tonight.”

Fairview put the game away in the second quarter.

A six-yard touchdown pass from Doug Rakes to Russ Zeedyk started the scoring in the period and widened the lead to 21-0 with 11:53 left in the half. The Apaches added a 36-yard scoring strike from Rakes to Cade Ripke at the 6:58 mark that extended the lead to 28-0 before the defense got into the act.

On Bluffton’s first play from scrimmage on the ensuing possession, Ripke picked off a Pirate pass and returned it 24-yards for a touchdown with 6:46 on the clock to put the black and gold on top 34-0.

The Apaches wrapped up the first half scoring at the 39 second mark when Timbrook rumbled through and around the Pirate defense for a 66-yard touchdown run to make it 41-0 at the break.

“The offensive line controlled the game up front for us,” stated head coach Doug Rakes. “They did a good job of opening up holes for us and blocking for the passing game. Being a lineman is a thankless job sometimes but this group just goes out and does their job.”

Fairview added three more scores in the third quarter as the Apaches pushed the margin to 61-0 after three periods.

Zeedyk hauled in his second touchdown toss of the game to start the second half scoring, catching a 61-yard pass for a score. The Fairview touchdown made it 48-0 in favor of the black and gold.

The duo again hooked up on the next Fairview possession, this time for a quick two-yard throw that widened the margin to 55-0.

Late in the third quarter, the black and gold widened the margin to 61-0 on a four-yard plunge for a score by Keaton Singer.

Bluffton’s lone touchdown came on an 80-yard kickoff return from Tyson Shutler on the final play of the third quarter.

“It was an overall team effort,” concluded the Fairview mentor. “We can enjoy this one tonight, but we know we need to get back to work for a very good, very talented Northwood team.”

Quarterback Doug Rakes completed 16 of 17 passes on the evening for 245 yards, including four touchdowns.

Russ Zeedyk caought four passes for 77 yards and three touchdowns while Kaden Blair and Caleb Frank each had four receptions for 49 and 36 yards, respectively. Cade Ripke caught two passes for 71 yards and a touchdown.

Luke Timbrook ran for 72 yards on five carries for Fairview, which finished with 151 yards on the ground and 299 in the passing attack. Bluffton was limited to 42 yards on 34 carries in the rushing attack and 58 yards of offense overall.