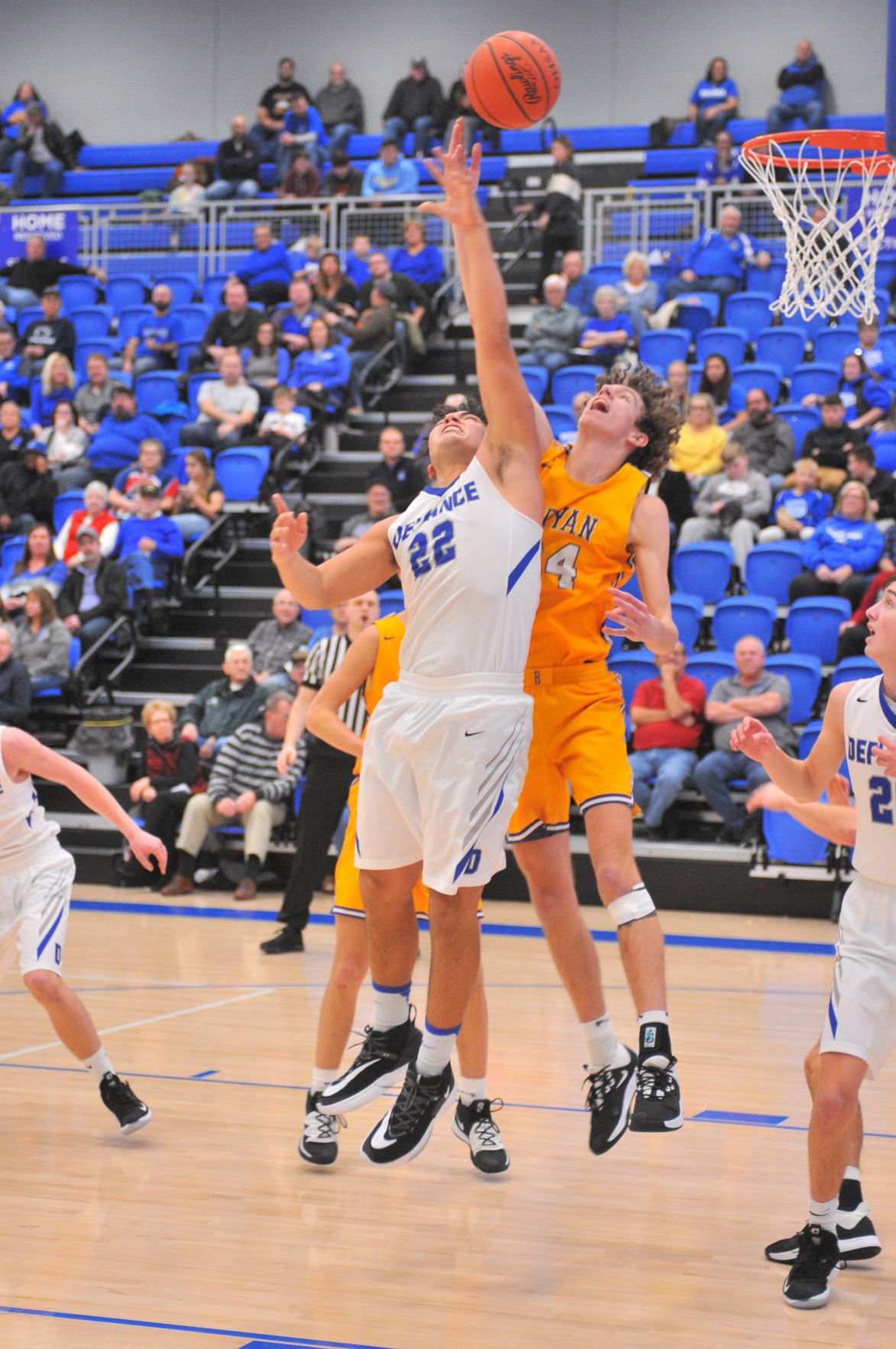 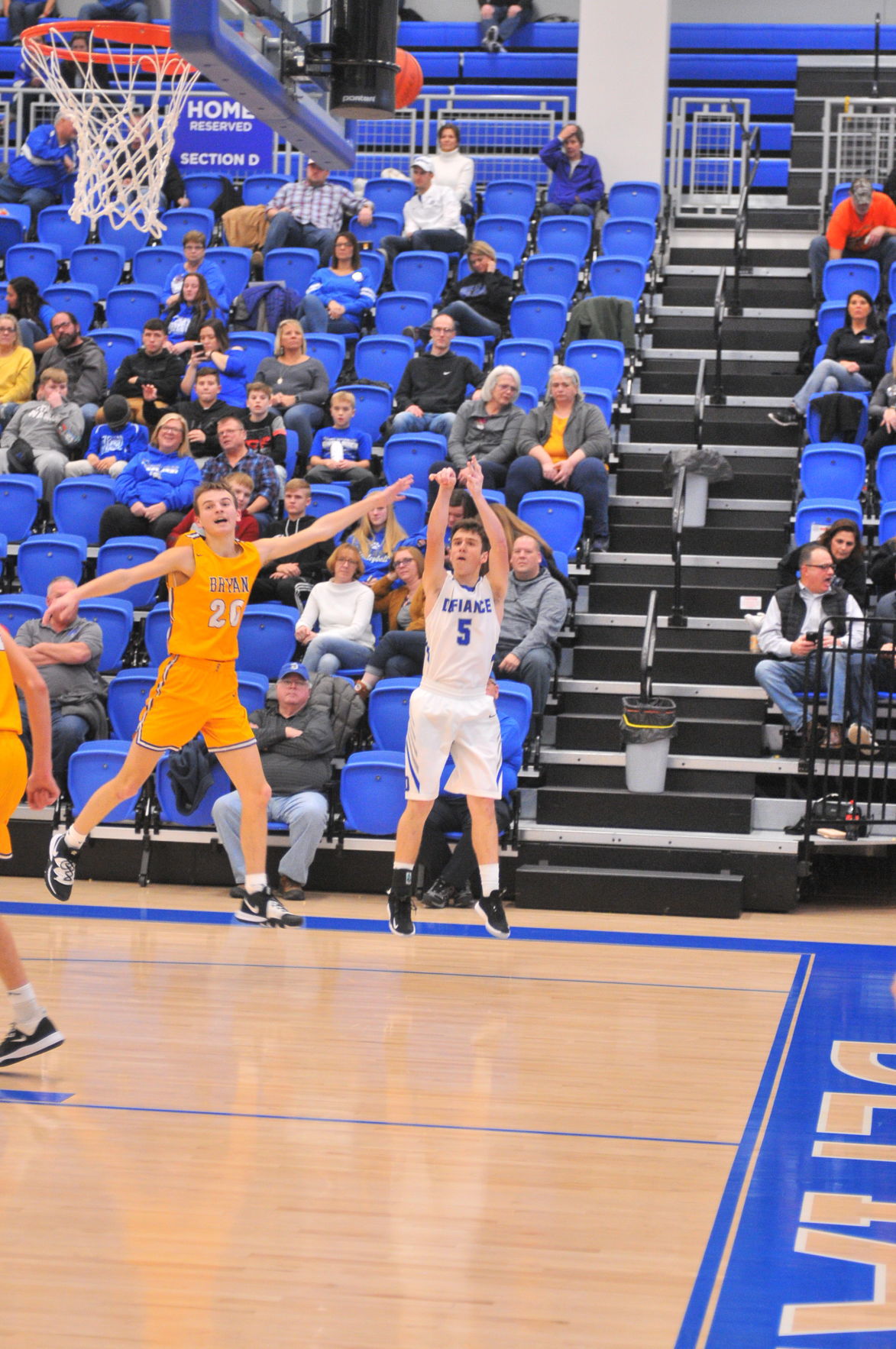 When Tyrel Goings put in a layup with one minute to go to put Defiance up, 36-30, it appeared Defiance would cruise to another win. But Defiance made things interesting by missing the front end of two one on one opportunities, along with a turnover in the final minute, to survive Bryan, 36-34.

Connor Arthur gave Bryan a chance to win by making a layup and two free throws, to cut Defiance’s lead down to two, at 36-34.

Brayn went to a full court press and picked up one steal, but missed a jump shot and Defiance’s Will Lammers snared the rebound. Then came the missed free throws. But both times, the Defiance defense came up with a steal.

The second one came in the final seconds, with Defiance securing the ball as time ran out.

“I was trying to call a time out right there near the end, but no one heard me,” said Bryan coach Brandon Fisher. “It would have been nice to have a chance to put up a shot to tie the game, but either way, I was proud of the kids and their effort. Their effort was excellent, the best effort they’ve put together all year.

“We were a little short handed with (6-6) Titus Rohrer not available, but the guys were able to put themselves in the right position to pull one out. But Defiance is a great team and made enough key rebounds and shots to pull this one out.”

With Goings sitting out most of the first half in foul trouble and Defiance having trouble solving Bryan’s zone, Defiance struggled to take a 14-12 lead into the locker room.

“With Bryan’s length, we struggled the first half and didn’t attack their zone well,” said Defiance coach Kirk Lehman. “But once we settled in and got the ball into the middle of the zone, we were better. It was a good win for us, but we’ve got a lot to do to get better.”

With Defiance leading by just 19-18 midway through the third quarter, Defiance went on a 7-0 run to take a 26-18 lead. Goings and Lammers put in two-pointers and Jacob Hutcheson nailed a three-pointer, to put Defiance up, 26-18.

But Arthur then hit a jumper for Bryan to close the gap to 26-20 after three quarters.

Hutcheson started the fourth quarter with another trey, but Arthur scored and hit a free throw to cut the Defiance lead back to six, at 29-23.

The two teams traded baskets and Hutcheson then hit a jumper to put Defiance back up at 33-25. Thanks to another thee point play from Arthur and a layup from Reese Jackson, cut Defiance’s lead back to three, at 33-30. Lammers hit one of two at the charity stripe and then came Goings’ bucket, setting up the frantic finish.

“Defensively, we gave up too many layups, but on the missed free throws, the guys did a good job of getting back on defense and stopping them from tying it. Tyrel did really well for us. I thought he was really good rebounding on both ends of the floor and was good underneath, offensively.”

Goings led Defiance (4-1) with 13 points, while Hutcheson added 10 points. After being saddled with foul trouble in the first half, Goings had 11 points in the second half. Goings was 1-2 from the free throw line and Defiance struggled there overall, gong just 2-9 from the charity stripe.

“For me, it wasn’t really frustrating sitting out most of the first half, because Eli (Rippetoe) did such a good job defensively for us,” Goings said. “For me, offensively, I was just waiting for my opportunities to cut and get open. I knew they would find me and I just wanted to build that lead for us. After losing last week to Rossford, we’ve been working on trying to get mentally tougher and I think we showed that tonight in the tense moments at the end.”