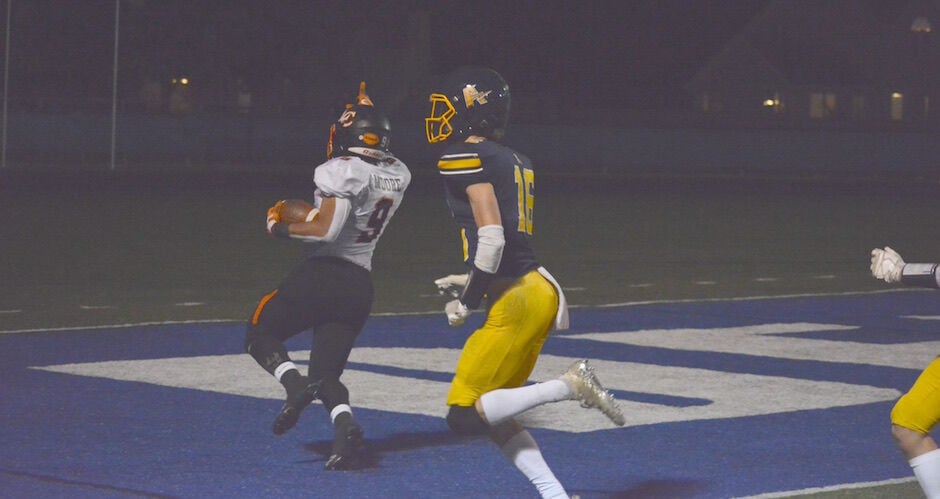 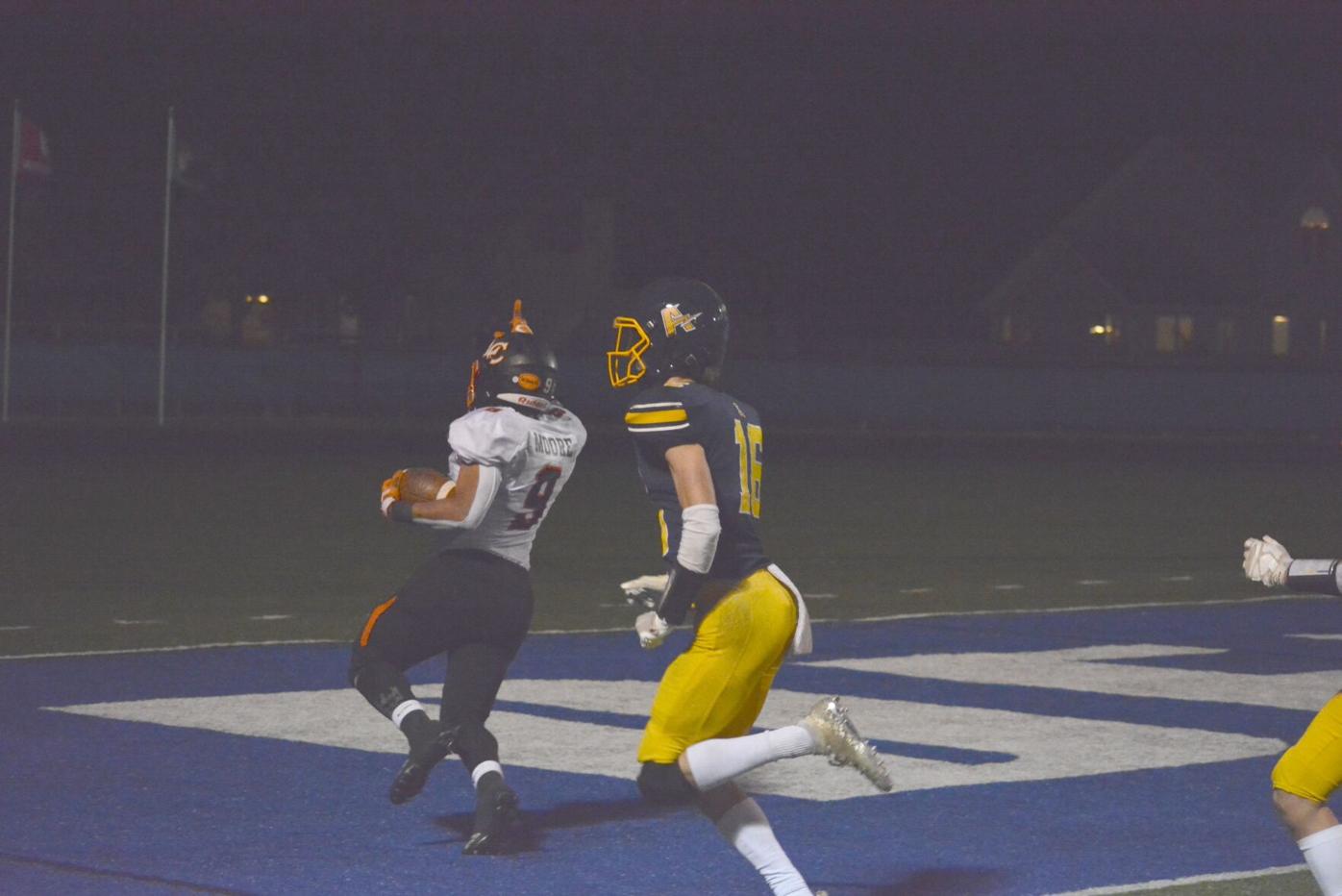 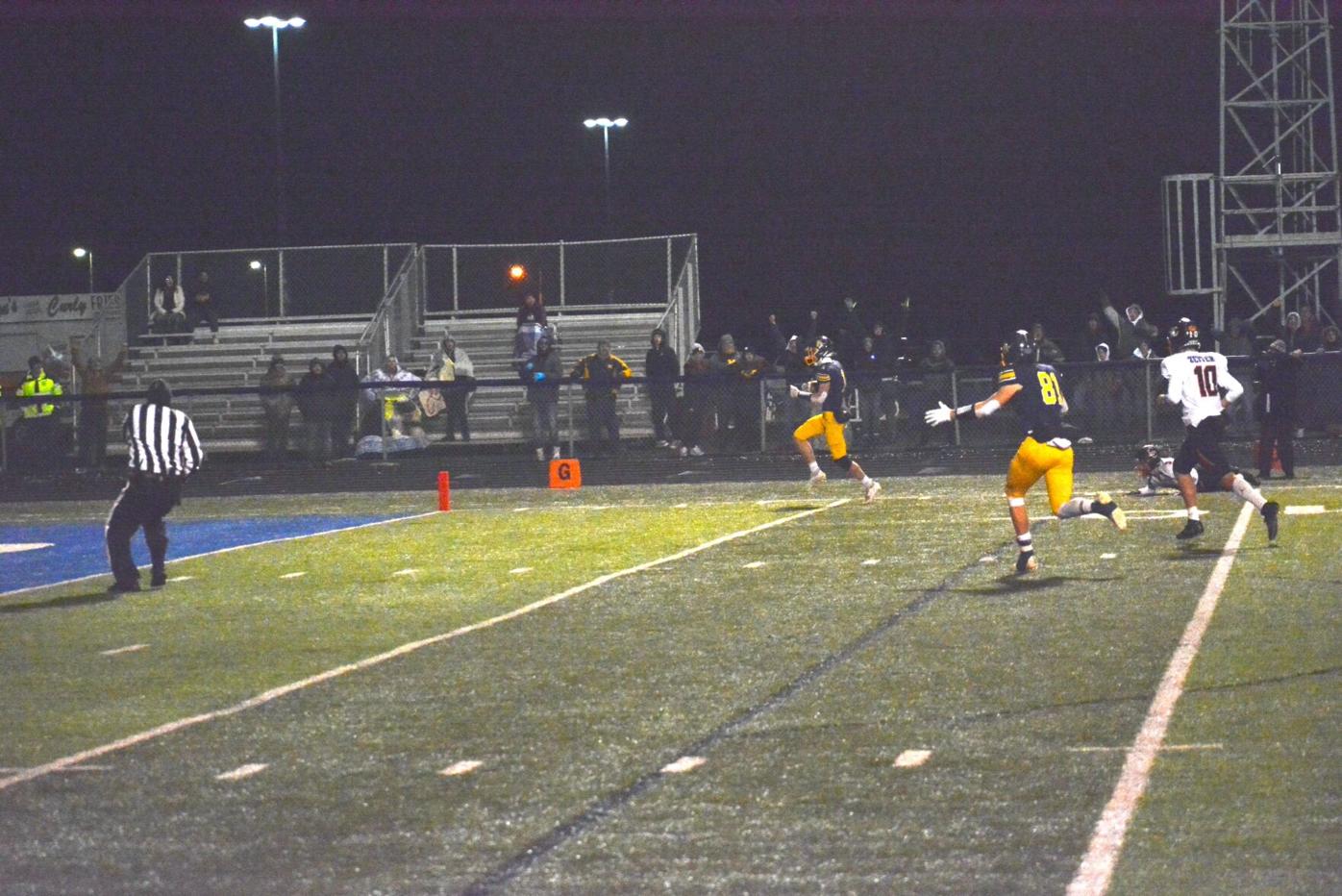 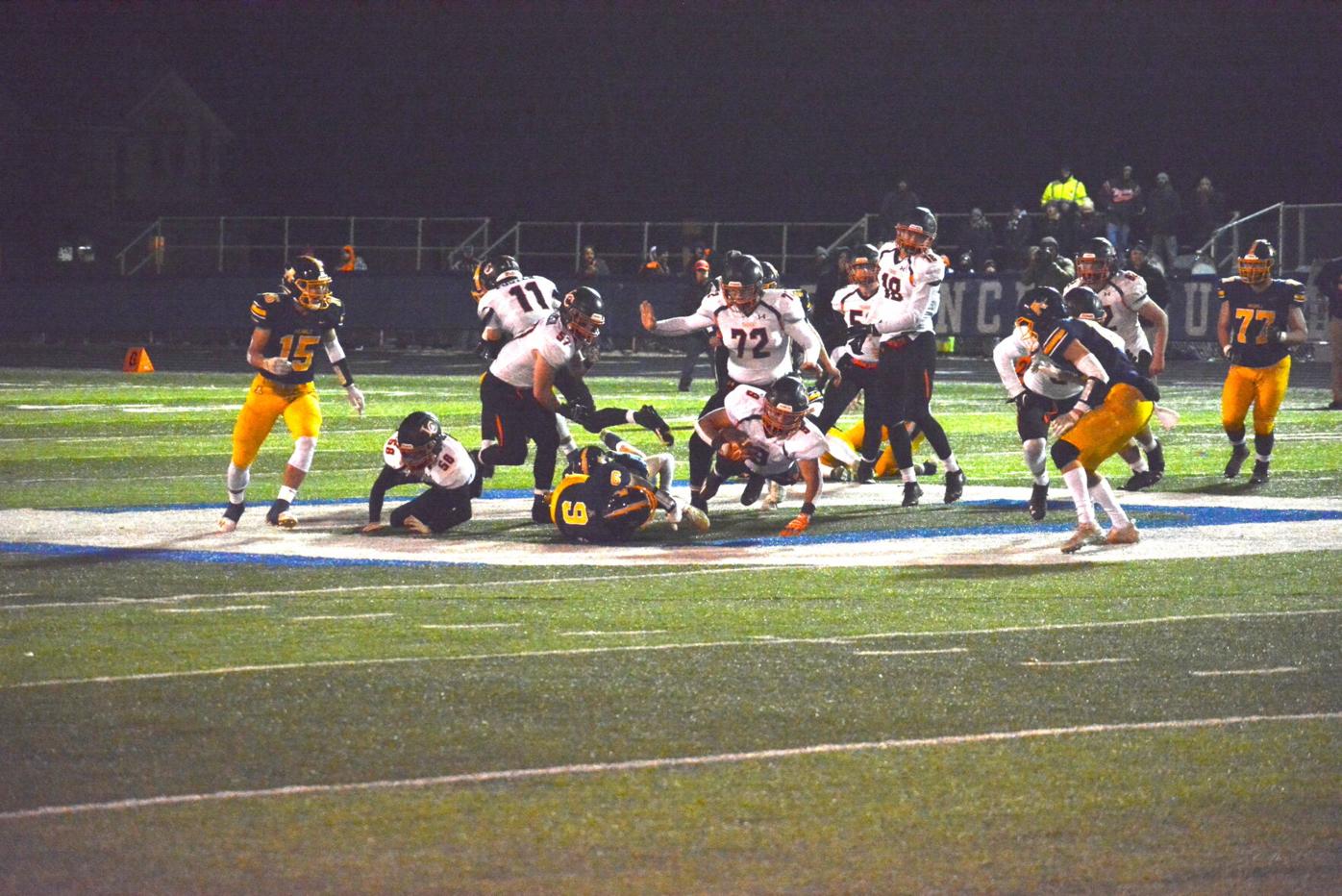 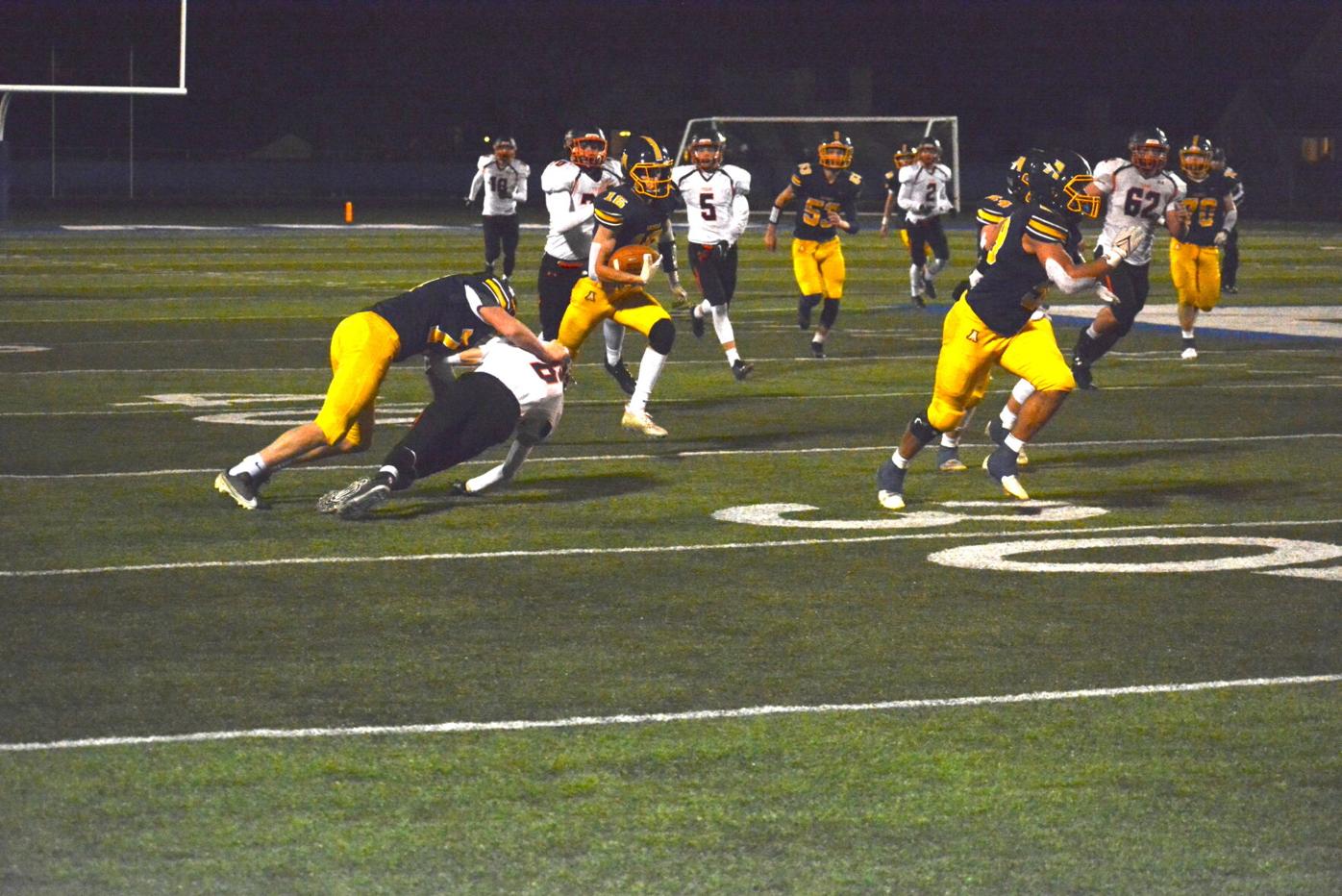 Liberty Center has made its name as one of Ohio’s premier small-school programs with a hard-nosed, physical style of football with tough defense and bruising running games with bulky backs and linemen.

They’ve also done it with special teams and senior kicker Carly Roth joined the list of LC hero booters, booming a 27-yard field goal through the uprights as time expired on Saturday night to give the Tigers a 38-35 upset win over No. 1 Archbold in a Division VI regional semifinal at Defiance’s Fred J. Brown Stadium.

“(This run) has been amazing. I felt like our whole season started over when the playoffs came,” said the senior kicker, who took on kicking duties after senior Wes Wymer was hurt during the regular season. “We were a whole different team walking out and all the guys, you can see it in their faces, how hard they play and how much they want it. It was amazing to get that kick, just for them, just for the team.”

“It’s pretty awesome for her,” said LC coach Casey Mohler, who will guide his Tigers into the regional finals for the second time in four years. “She’s worked with (special teams coach Tom) Russell all season long and she’s got nerves of steel.”

The victory not only marked revenge for a dominant 41-7 Archbold victory in the regular season but propelled the Tigers (11-2, No. 14 D-VI AP) to a Nov. 20 regional championship game against 12-1 Carey.

Even with leading rusher Matthew Orr banged up during the game and limited to eight carries, LC racked up 313 yards rushing on 58 attempts and stayed on the field for 33 of 48 minutes to limit a potent Archbold offense to its lowest scoring total since week four.

“If you fall behind Archbold, it’s like a slow death, but our guys came out and played hard and got that early lead,” said Mohler of the complete team win for the Tigers. “To win games like this, you have to have a team effort. You can’t be a one-man show unless you’ve got an absolute D-I stud and we don’t have that. We rely on all 11 guys and they worked together and they do it for each other.”

“The biggest difference, they had a great game plan and just their physicality,” said Archbold coach David Dominique of the team’s first loss of the season. “They got us down early but I’ll tell you what, our guys never quit. We’re down 14 with six minutes left, tie it up and they kick that field goal right at the end.

“I told our guys there’s nothing to hang your head about, you lost to a very good football team … They were just very physical as a whole and the better team won tonight.”

Even after Liberty Center took a two-touchdown lead in the fourth quarter, Archbold’s quick-strike offense set the stage for a potential storybook comeback.

The Bluestreaks (12-1) answered a Teejay Moore TD run with 6:32 left with a touchdown drive of their own as do-it-all QB DJ Newman found Gavin Bailey for a 14-yard TD strike to halve the deficit with 4:37 remaining.

Then a Krayton Kern onside kick was recovered by the Streaks on the sideline to keep hope alive. Dominique dialed up a deep bomb on the very next play as Newman dropped a rainbow pass down the right sideline to find Bailey for a 52-yard game-tying touchdown with 4:26 left.

The Bluestreaks never touched the ball again, however, as LC converted a pair of third downs on an 80-yard drive that saw Moore rack up 38 rushing yards, including a 22-yard gain to the Streak 22.

Three Moore runs got the Tigers to the Archbold 10 and Mohler let the clock run down to 3.6 seconds left before calling timeout to set the stage for Roth.

After Archbold called timeout to try and freeze the Tiger senior, Roth stepped up and split the uprights for the game-winner.

Added Moore, who led LC with 143 yards and two scores: “Carly’s a new person this year, just like me. She came up big. It’s so crazy … In week five we came out flat and we knew that the last game we played against them was not who we really were. As the year went on, we started getting better and better and I think we’re reaching the point where we’re hitting our full potential.”

Archbold saw a sloppy first half with three penalties and some slashing ground gains from Liberty Center mark the most points scored in any game this season in just two quarters.

A gamble by the Bluestreaks went broke on their opening drive as Newman was stuffed on fourth-and-four from the Archbold 33. LC made the Streaks pay as Zeiter and Orr teamed up to draw first blood for the Tigers as Orr bulled through for a six-yard TD run.

A Bluestreak three-and-out, boosted by a 16-yard loss when Owen Box sacked Newman, set up another LC scoring drive. Zeiter matriculated the Tiger offense 51 yards in 3:29, putting LC up two scores at 14-0 with 2:20 left in the first quarter.

The contest marks the final game for the Streaks with the star Newman under center. The Archbold senior signal-caller had 47 rush yards on 14 attempts and completed 12-of-18 passes for 265 yards, four touchdowns and no interceptions.

“I told him after the game, he’s the best player in this league since (Wauseon QB 1993-95) Cory Griggs at quarterback and he’s probably the second-best player I’ve coached against outside of (Orrville running back) Marquael Parks,” lauded Mohler of the departing NWOAL Offensive Player of the Year. “We just knew we were going to have to continue to plug away and know he’s going to make plays.”

Bailey finished with seven receptions for 163 yards and three TDs in his final game while Behnfeldt had two catches for 53 yards and a score.

Zeiter put together a gritty effort with 52 pass yards (4-of-6) and 32 rushing yards and two TDs on 16 attempts while Kruse put up 79 yards rushing in relief of Orr.