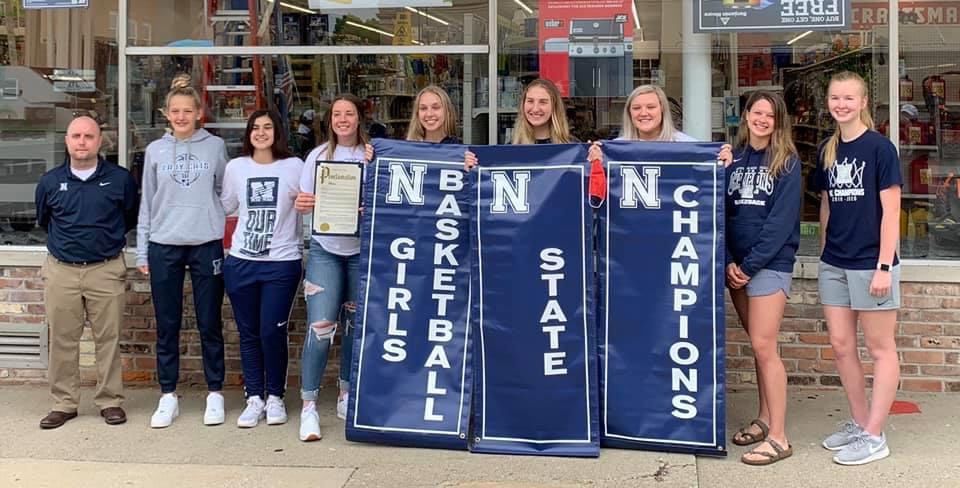 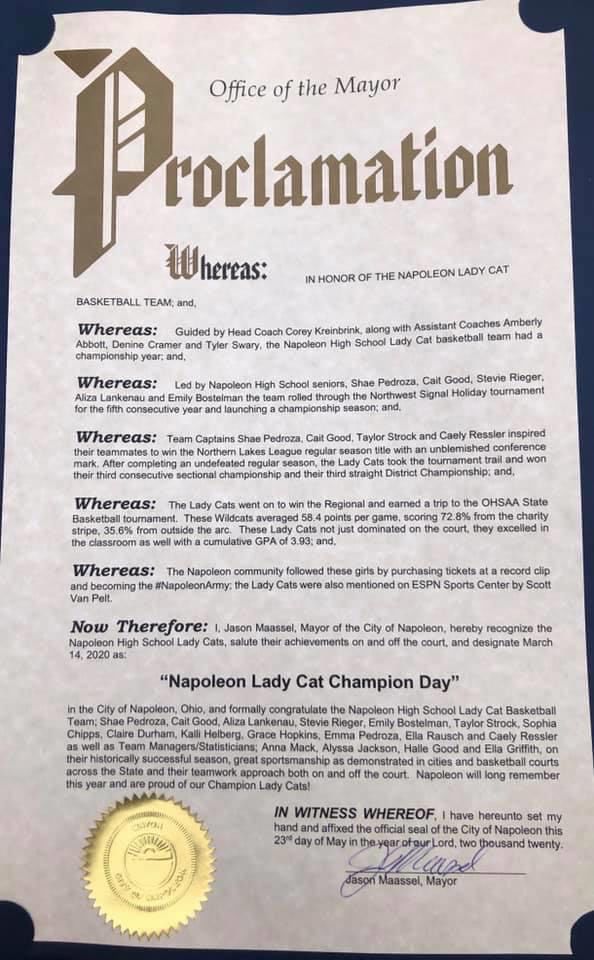 A proclamation from Napoleon mayor Jason Maassel announces that March 14 is Napoleon Lady Cat Champion Day and formally congratulates the members of the 27-0 state semifinalist girls basketball team for their efforts this season.

A proclamation from Napoleon mayor Jason Maassel announces that March 14 is Napoleon Lady Cat Champion Day and formally congratulates the members of the 27-0 state semifinalist girls basketball team for their efforts this season.

NAPOLEON — Though the ultimate goal of state title glory wasn’t in the cards for the Napoleon girls basketball team in 2019-20, the Ladycats were honored by the City of Napoleon Saturday morning with a proclamation and banners raised in downtown Napoleon.

The Ladycats rolled up a 27-0 record and the first regional championship in program history in 2019-20 before the state tournaments were postponed and ultimately canceled in response to the coronavirus outbreak on the day Napoleon was set to play Dresden Tri-Valley in the Division II state semifinals.

“It’s just another example of the tremendous community support that happens in Napoleon,” said Napoleon head coach Corey Kreinbrink. “It was not something that was expected by anyone from the team.”

The official proclamation from Napoleon mayor Jason Maassel read, in part: “Now therefore: I, Jason Maassel, Mayor of the City of Napoleon, hereby recognize the Napoleon High School Lady Cats, salute their achievements on and off the court, and designate March 14, 2020 as ‘Napoleon Lady Cat Champion Day’ in the City of Napoleon, Ohio, and formally congratulate the Napoleon High School Lady Cat Basketball Team: Shae Pedroza, Cait Good, Aliza Lankenau, Stevie Rieger, Emily Bostelman, Taylor Strock, Sophia Chipps, Claire Durham, Kalli Helberg, Grace Hopkins, Emma Pedroza, Ella Rausch and Caely Ressler as well as Team Managers/Statisticians; Anna Mack, Alyssa Jackson, Halle Good and Ella Griffith, on their historically successful season, great sportsmanship as demonstrated in citites and basketball courts across the State and their teamwork approach both on and off the court. Napoleon will long remember this year and are proud of our Champion Lady Cats!”

The Wildcats rumbled through the Northern Lakes League season with a perfect 12-0 mark and claimed the program’s first-ever outright league crown with a dominant regular season.

Napoleon won each of its 22 regular season contests by an average of 29.3 points per game, with only one coming by a winning margin of less than 13 points. The Wildcats rolled past Berlin Center Western Reserve 72-31 in the annual Classic in the Country Challenge and turned up the intensity in the postseason.

Napoleon defeated Kenton 62-14 in sectionals, Wauseon (70-37) and St. Marys (63-16) in districts and dispatched Rossford (62-38) in regional semifinal action at Ohio Northern before downing Willard 54-37 for a regional championship at Mansfield Senior.

The honor provides a measure of closure for the Ladycats, including graduating seniors Pedroza, Good, Rieger, Lankenau and Bostelman.

“There were a number of individuals involved in the effort to show the immense amount of pride the city of Napoleon has in the school with the proclamation and every senior banner hung from the class of 2020,” added Kreinbrink. “It is another thing the kids can use to help gain closure from missing out on a number of things from the season and school year.”