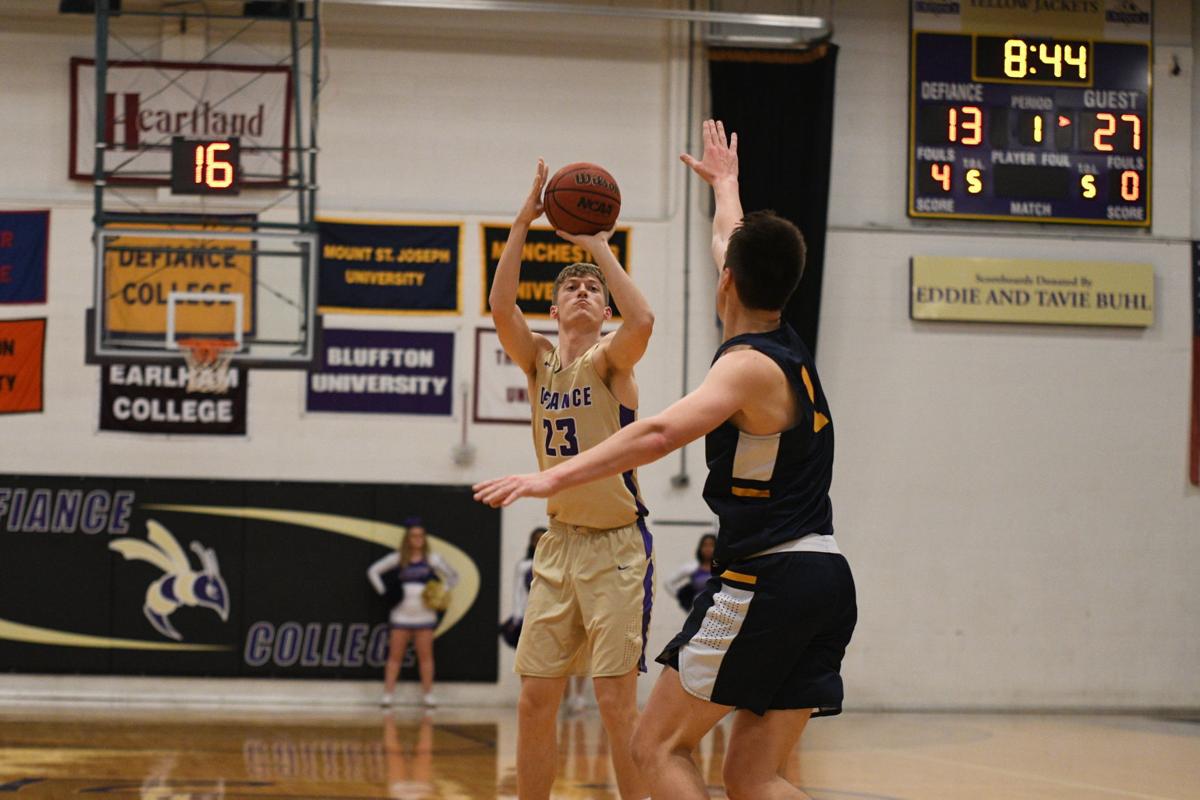 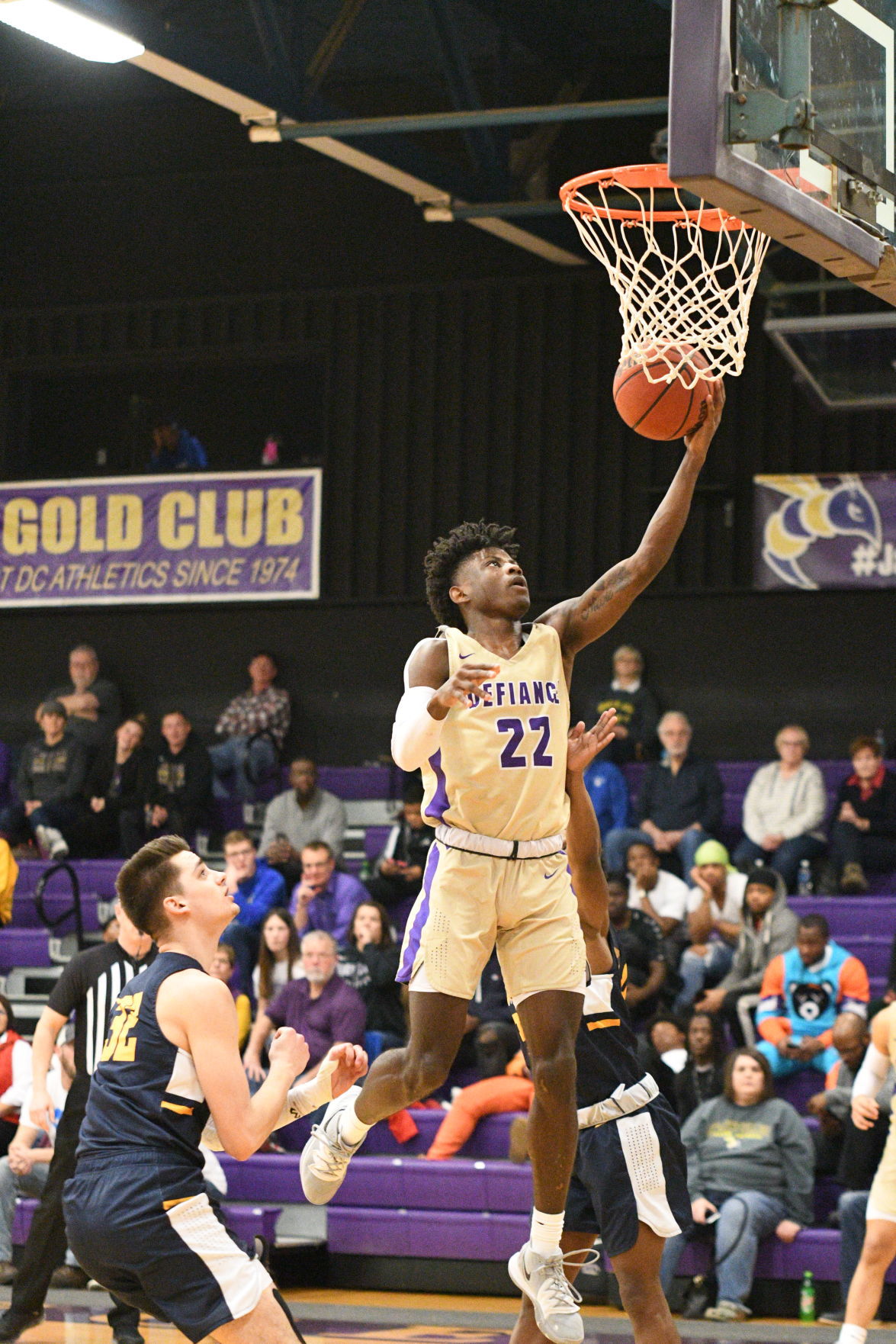 Things didn’t look good for the Yellow Jackets in the first half of Saturday’s HCAC clash with the Lions of Mount St. Joseph.

Getting a rather late start after the DC women’s triple-overtime victory, the Jackets were out-battled, out-shot, outhustled and out-rebounded by the visiting Lions, resulting in a 49-34 deficit that had the hosts scratching their heads at the break.

But Defiance College men’s coach Scott Cutter asked for energy from his Yellow Jackets, and energy he received.

A reenergized effort and a frustrating zone defense took effect from the onset of the second half, fueling a 44-25 resurgence that ended up in a 78-74 come-from-behind win for the hosts at the Karl H. Weaner Center. It was a victory that marked the Jackets’ second straight and improved them to 9-6 overall and an even 4-4 in the HCAC.

“(Our energy) was low. I was really frustrated about that,” said Cutter of the first half. “And there were no signs … we had two great days of practice, the locker room beforehand was good. We sat here a little bit during the overtime game, figuring our guys would be able to get going, but the first half was just not there. Sometimes you can dig yourself out of a hole, but a lot of times if you start out like that you’re not going to win a basketball game.

“You just cannot have games where you’re sluggish out of the gate, and we dug ourselves a pretty massive hole,” he continued. “You cannot guard their stuff if you’re sluggish. You’ll get torn up … and we did.”

The Yellow Jackets had a hard time keeping wraps on 6-6 MSJ sophomore Devin Young, who led the MSJ charge with 18 of his 25 total points coming in the first half. Young paced a Lions offensive display that included 60.7 percent shooting from the field (17-of-28) in the first 20 minutes, with 60 percent (6-of-10) coming from the arc.

Also making a huge difference on the scoreboard was a free throw discrepancy that had the guests hitting 9-of-10, while the Yellow Jackets missed on their one and only foul shot attempt in the opening half.

But what was most telling on the intensity meter was Mount St. Joe’s dwarfing 21-12 advantage off the glass, doubling up the Jackets with an 18-9 edge in defensive rebounding.

“(MSJ) Coach Carrigan does an amazing job. He’s got a young team like we do,” said Cutter of the Lions. “His guys are getting better and better each game and they’re hard to guard. They run Princeton offense and it’s just really hard, especially for young guys who have never guarded it before. I knew it would be a challenge, but we just couldn’t guard them in man-to-man. You’ve got to make a decision at some point if it’s just not working.”

That decision came at the break, and what followed was a momentum shift strong enough to shake the room and slant the scoreboard.

The Jackets switched to a 2-3 zone, frosting MSJ’s shooting percentage from the floor to just 27.6 percent (8-of-29) in the second half and slipping from the perimeter to a cool 28.6 percent (4-of-14). Meanwhile, DC evened the score off the glass, posting a 21-15 advantage down the stretch.

“They did a great job. They went zone,” said Carrigan of the Jackets. “They know we’ve struggled with zone in the past. We did make some shots, but if we could have been just average defensively in the second half we might have been able to hang on. But to their credit, they made plays in the second half and we couldn’t do anything about it.”

More specifically, the Lions couldn’t seem to do anything about DC freshman Chase Glock.

While the 6-6 Stryker grad did toss in three treys in the first half, the second 20 minutes — particularly the last 10 — proved to be an all-around effort at the rim, off the glass and on both ends of the floor. Meanwhile, sophomore guard Sean Tyson — who was held scoreless in the first half — went off for 14 points after the intermission as the Jackets went to work digging out of the hole.

Defiance sprinted out of the locker room with a quick 11-3 burst, getting a huge push from a dunk by sophomore Marell Jordan and a triple from Tyson that helped pull the hosts to within 52-45 nearly five minutes into the half.

While threes from Reece Thomson and Brady Thomas helped MSJ maintain some distance, a pair of clutch 3-balls by freshman Jack Kolar and another by freshman Avonte Jones spurred a huge 15-4 spurt that gave DC its first lead of the game at 62-61 with 9:16 to play.

Tyson and Glock took it from there, netting the remainder of the Yellow Jackets’ points with the clock winding down. But Glock — who finished the day with eight rebounds — stepped up in many other places, pulling down key offensive and defensive rebounds while coming up with several crucial blocks at crunch time.

“Chase has had some nice games leading up to this,” said Cutter. “He’s gaining our confidence in having a major role on our team. He did it offensively, but to me he was on the boards and he was affecting everything at the basket. He was a rim-protector in the second half and it was hard for them to get stuff at the basket, and that was huge for us.”

A much more fluid DC offense improved the Jackets’ shooting to 55.2 percent from the floor (16-of-29) in the second half to finish at 48.4 percent (31-of-64) on the game. The Jackets also got 18 points out of Jordan, who was a crucial source of energy in an otherwise flat first half, while 6-5 sophomore Tyler Andrew also reached double figures with 10 tallies.

“We couldn’t get any stops,” said Carrigan of the second half. “We had a lead at halftime because we were getting stops. We made some shots, but defense is what got us where we were at halftime. In the second half, we just did not get enough stops. It was not good.”

The Yellow Jackets will now continue their pursuit of remaining in the HCAC hunt with a trip to face Earlham (7-8, 3-5 HCAC) in a clash that will wrap up the first round of conference play.

“We’ve got some things to work on and improve upon, but it’s nice to do it off of a win,” said Cutter. “It puts us right back in the mix. Our goal is to get in that conference tournament, and it’s as wide open as its ever been before. We’ve just got to get in now. Every game we’re taking one game at a time, and we have to do the same thing on Wednesday.”