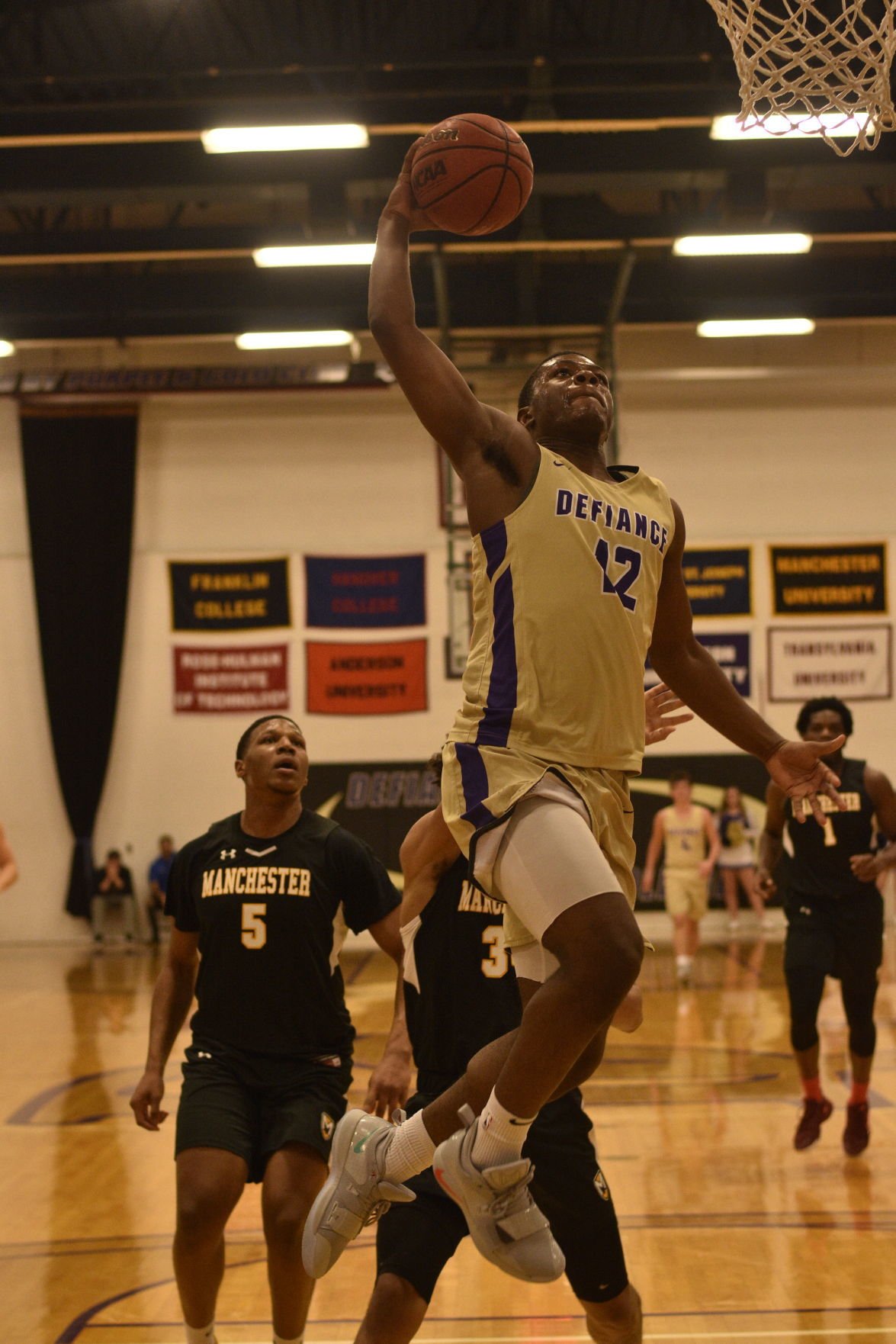 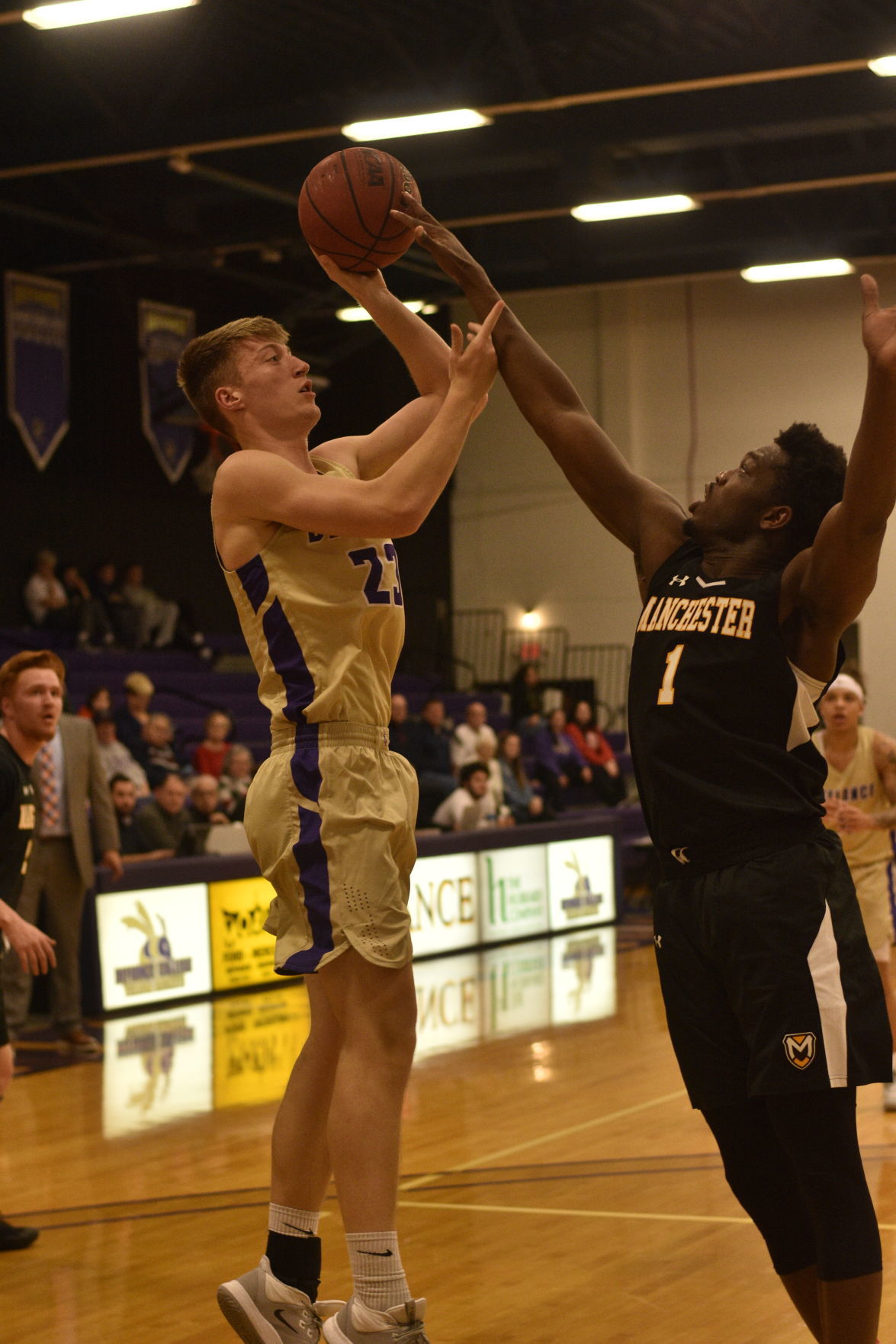 From Sean Tyson’s aggressive layup to open the game to fellow sophomore Marell Jordan’s jumper to close it, the Defiance College Yellow Jackets appeared more than determined to snap a five-game losing skid on Wednesday against HCAC rival Manchester.

And due to a red-hot night of shooting from everywhere, several players stepping up to score when it was there and dish it when it wasn’t, and a telling plus-11 in the rebounding column, the Jackets got it done in style.

Led by Tyson’s 25 points and six assists, DC led wire-to-wire in a determined 99-83 victory over the visiting Spartans at the Karl H. Weaner Center, improving the Jackets to 8-6 overall and 3-4 in the HCAC.

Tyson — a team “veteran” on the Yellow Jackets’ experience-challenged roster — was followed by a freshman youth movement on the scoreboard that included David Perkins along with local grads Owen Hiegel (Ottawa-Glandorf) and Chase Glock (Stryker). While Perkins had a breakout night of 18 points and eight rebounds off the bench, Hiegel iced 4-of-6 from long range and finished with 14 tallies.

Meanwhile, Glock canned both of his long ball attempts and chipped in a valuable 10 points off the pine.

“We had a lot of guys step up tonight,” said Defiance head coach Scott Cutter, whose Jackets posted a 19-5 scoring advantage off the bench. “We really challenged the older guys here these last few days … when I say older guys, I mean sophomores. Because to us, that’s our older guys. We challenged our returning players to start playing like older guys. We started learning from some of the mistakes we’ve mad and we started improving upon them.

We definitely had that tonight, and then we had multiple guys going offensively,” he added. “One guy fed off another, which fed off another, and I thought we were pretty hard to guard tonight.”

The Jackets were also tough to keep up with, especially in the opening half.

Out of a final 57.1 percent shooting from the field (50 percent from the perimeter), the Jackets’ first 20 minutes consisted of a lights-out 59.4 percent (19-of-32) from the floor with 53.3 percent (8-of-15) coming from downtown en route to a commanding 51-36 lead at the break. Making matters even tougher on the Spartans was the fact that the hungry hosts ended the night a flawless 14-of-14 from the charity stripe.

“You have to give them credit because they’re really hard to guard,” said Manchester mentor Nate Conley, a DC grad and recent member of the Defiance coaching staff. “They are very offensively talented and have multiple guys who can score the basketball. Coming into the game, all nine of their rotation guys have scored 14 or more in an HCAC game. They’re a really good three-point shooting team, they’ve made the second-most threes in the conference. But as you try to take that away, they’re really difficult to guard inside the three-point line as well.

“So I give Coach Cutter and their team a lot of credit for their win tonight,” he said.

It wasn’t that Conley’s Spartans had a bad night, as four of five starters cracked the double-digit scoring barrier and nailed 44.8 percent (30-of-67) from the field. This included 12 triples out of 33 attempts (36.4 percent), with the only low point from a shooting standpoint coming via the free throw line. Paced by 24 points by junior guard Matthew Westman and 21 out of classmate CJ Hampton, Manchester struggled at the stripe with a 64.7 percent finish (11-of-17).

Where the Jackets cranked up the heat was off the glass, which has been an area of inconsistency as of late.

Despite a slight deficit in offensive boards, DC ripped down 31 defensive rebounds in a 39-28 landslide over the Spartans in a spirited performance from the tip.

“I’m proud of the guys,” said Cutter. “They got challenged and had a really nice game. It feels good to be on the right side of the winning column. I’d rather learn some things off a win than a loss.”

The Spartans made a good run at Defiance with the first half winding down, shaving what was as much as a 14-point lead for the Jackets down to just 40-33 with treys from Westman and junior Jared Andis. But Perkins, Hiegel and Glock each responded with a 3-ball of their own before a Tyson bucket put the finishing touches on a 12-3 spurt to close out the half and ride the momentum into the break.

“Again, give Defiance credit,” said Conley. “Because when we did cut it to seven, they kept their composure and somebody hit a big shot or made a big layup. We had stretches where we played hard enough to keep us in the game, so that’s the one thing I’m leaving that we didn’t do for 40 full minutes. From a coaching standpoint I’m a little disappointed that we didn’t play harder, but I think we were a little deflated because Defiance was making plays.

“Sometimes it’s just a game of momentum and runs,” he noted. “And give Defiance credit for the runs and momentum that they were able to have tonight.”

Next up for the Yellow Jackets is another HCAC test from Mount St. Joseph (3-11, 1-6 HCAC), which is slated for a 3 p.m. tipoff as game two of a twinbill following the DC women’s game at 1 p.m.

“You can’t get comfortable,” said Cutter. “We just gave up 83 points … you can’t give up 83 points. You’re not going to have a lot of nights where we were rolling like we were tonight. We’ve got to find another level of defense and learn from some things we didn’t do great tonight, and do that with some confidence in our back pocket coming off the win tonight.”