Owner of stolen vehicle is identified 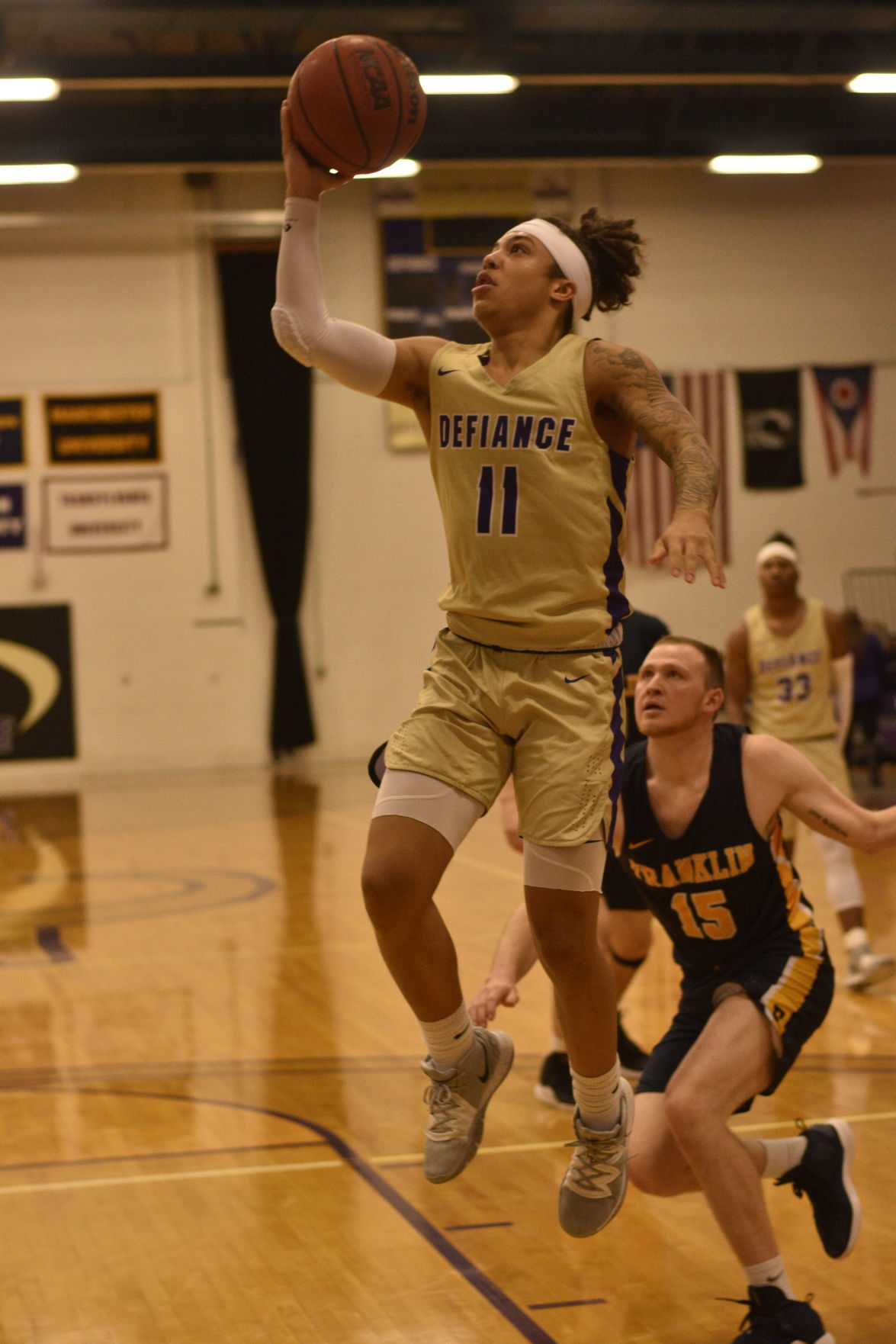 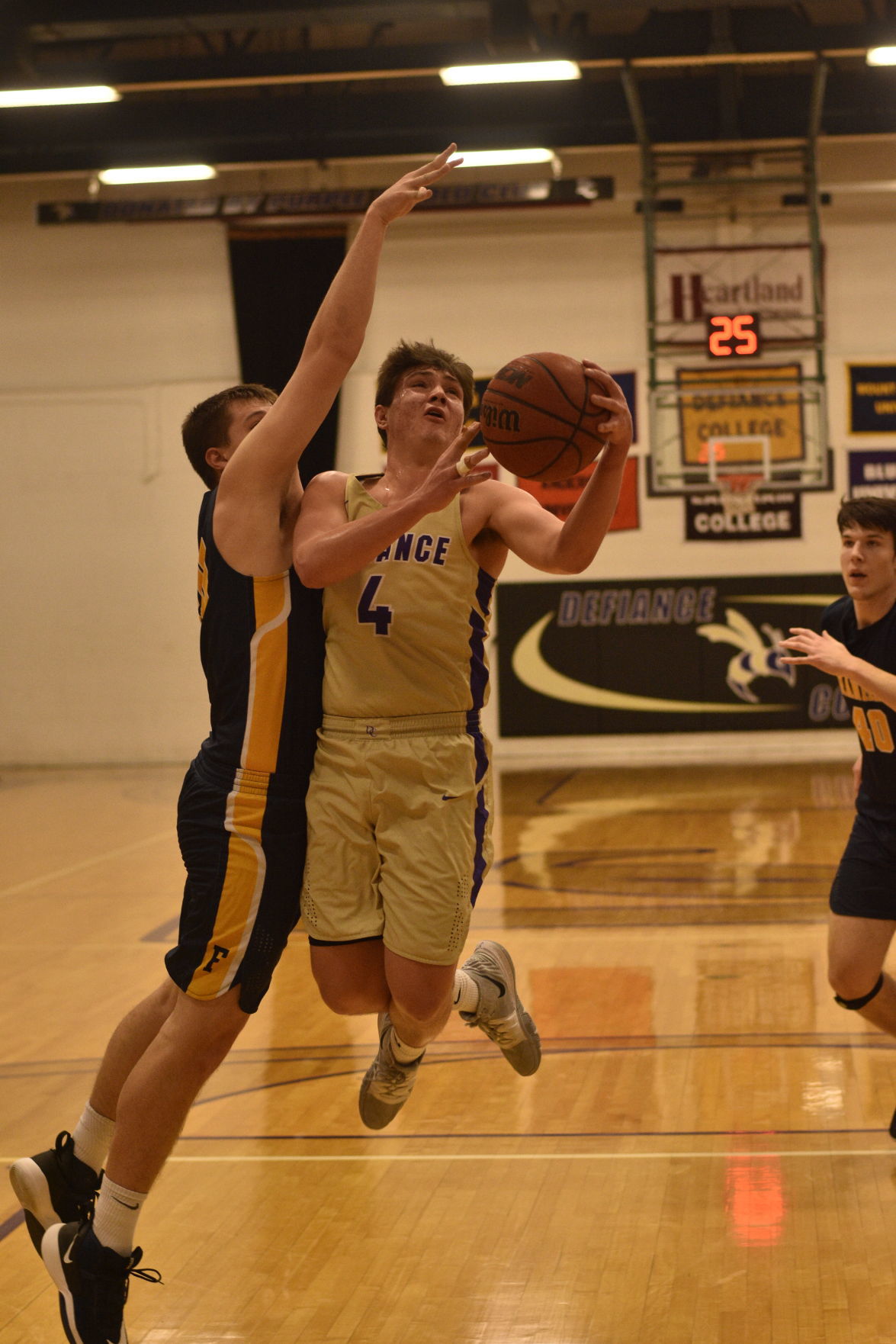 There may not have been any precipitation outside the Karl H. Weaner Community Center on Saturday, but it was raining quite heavily inside.

Threes, that is, especially in the opening half.

But unfortunately for the large crowd of Defiance College Yellow Jacket fans who showed their support on “Hero Appreciation Day” against the visiting Grizzlies of Franklin College, it wasn’t the hometown team creating the downpour.

The Grizzlies (7-4, 3-1 HCAC) buried a dizzying 12-of-18 (66.7 percent) attempts from behind the arc in the first half on their way to an 83-64 victory over the host Yellow Jackets in a Heartland Collegiate Athletic Conference battle as each squad opened their 2020 portion of the conference schedule.

The loss was the third straight for DC, which now sits at 7-4 overall while slipping a step in the HCAC standings to an even 2-2.

“They have a lot of offensive firepower. I give them a lot of credit,” said Defiance College men’s coach Scott Cutter of Franklin. “They have a lot of older guys, and they’ve done a great job of building the team how they want to build it. They’re really hard to guard, especially when they make 12 threes in a half”

Four of five Franklin starters struck more than once from long range in the first 20 minutes, with 6-3 junior guard Sam Gutierrez’s four triples leading the way to the Grizzlies’ sizeable 48-31 lead at the intermission. Gutierrez netted all 14 of his total points in the first half, pouring in 11 within the first five minutes that included three treys and a layup.

“Hats off to (Defiance), they’ve got a defensive strategy that’s hard to play against. Anybody that plays Defiance and doesn’t shoot the ball well is gonna struggle,” said Franklin mentor Kerry Prather. “So I appreciated having a little more prep time for this. We’re a team that keeps getting progressively better shooting from three. We haven’t been a great three-point shooting team, but we keep getting better.

“But I honestly though, from start to finish as much as anything, they’re a very tough team to defend,” added Prather of the Jackets. “I thought we did a pretty good job of making most of them (shots) earned and we gave them very few second ones. By us shooting it well, they had fewer opportunities in transition where I think they’re really good.”

That much was evident through the first 10 minutes of the game, as the Jackets aggressively held their own against a team that seemed automatic from the perimeter. While starters Sean Tyson and Ottawa-Glandorf product Owen Hiegel kept DC in the mix with clutch responses, sophomore Marell Jordan and Stryker grad Chase Glock — who led the team with a respective 18 and 12 points — came off the bench and made some immediate noise.

Jordan busted out a pair of 3-balls, both of which claimed one-point leads for the Yellow Jackets. His second capped off a 7-0 spurt that put the hosts out in front by a slim 21-20 edge with 12:11 showing in the half.

And that’s when the rains came.

Franklin responded with a momentum-soaked 21-4 run that included triples from Gutierrez, senior Kale Morris, senior Jordan Anderson and a pair from classmate Borden Kennedy that ate up nearly eight minutes of clock. And with 6-5 sophomore scoring threat Tyler Andrew briefly out of the game with a twisted ankle, a pair of Glock buckets were the only points Defiance could muster in a run that saw the Jackets go scoreless for large chunks of time.

Andrew returned late in the half for a pair of jumpers to level things out, but the damage was done and the Grizzlies had all the control of a 17-point lead at the break.

“They were scoring and we were scoring, and then we hit sort of a lull,” said Cutter. “Tyler rolled his ankle, and that was tough on us because he had it going pretty good early. And then that time he was out, they really got it going and we stalled out on offense. There was a time when we didn’t score a whole lot, four points in about a five or six-minute stretch. I think they’ve got a good team and they’re super hard to guard.”

Tyson dropped a 3-pointer and a layup late in the second half that pulled the Jackets to within 11 points each time, the second clipping the Franklin lead to 71-60 with 5:48 left in the game. But Mills led the way with four points in a game-icing 12-4 spurt for the Grizzlies that wrapped up the victory.

Kennedy topped the Franklin scoring chart with 18 points on a day the Grizzlies placed all five starters in double figures.

“Our guys fought until the end and got us within striking distance,” said Cutter, whose Jackets shot 53.8 percent (14-of-26) in the second half. “I thought we had a chance to get back in it, but you’ve pretty much got to play perfect at that point. We didn’t play good enough to get ourselves all the way back. I’m proud of the guys’ effort … they never stopped playing hard, but you’ve just got to play better if you want to win.

“I do think our urgency in the second half was better than where we would have liked to have had it in the first half, especially on the defensive end of the floor,” he added. “I think they shot 39 percent in the second half, which is not bad, you can win some games like that. But when you let them score like they did in the first half, it’s gonna be really hard to come back and win the game.”

The Yellow Jackets will now host HCAC rival Bluffton (6-5, 2-2 HCAC) on Wednesday at 8 p.m. in game two of a twinbill tipping off with the women’s game.