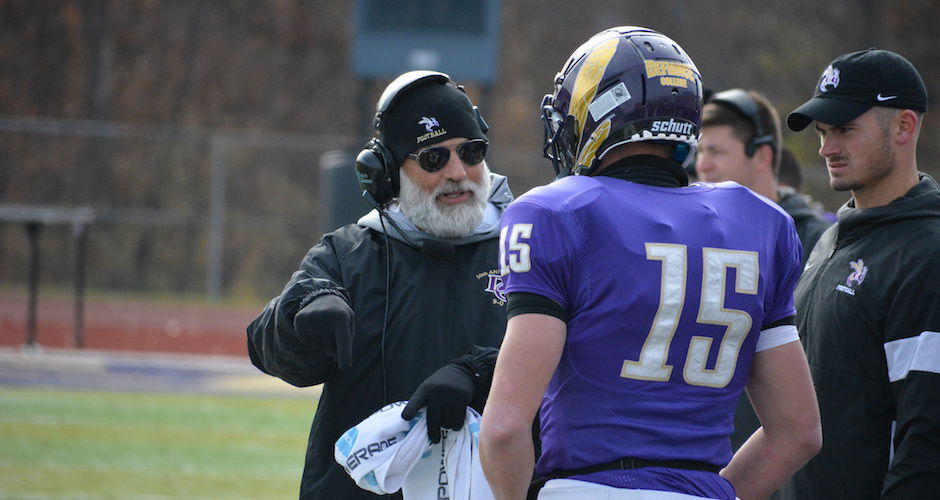 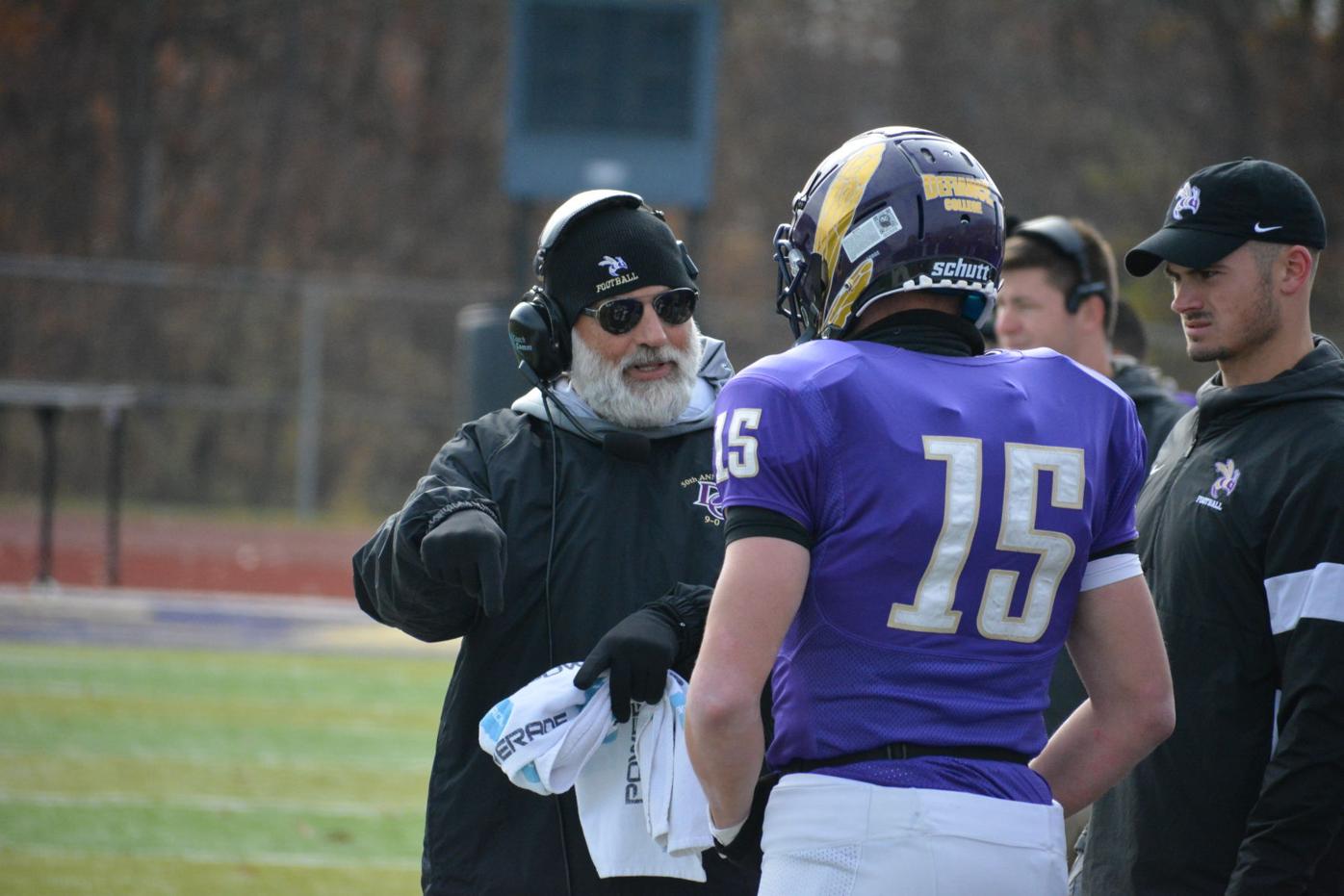 Defiance College football coach Manny Matsakis (left) gives instruction to Yellow Jacket receiver Jason Santora (15) during a 2019 HCAC contest. With the conference’s announcement that fall contact sports would be postponed to the spring, Matsakis’ third Jacket season will take on a different look.

Defiance College football coach Manny Matsakis (left) gives instruction to Yellow Jacket receiver Jason Santora (15) during a 2019 HCAC contest. With the conference’s announcement that fall contact sports would be postponed to the spring, Matsakis’ third Jacket season will take on a different look.

Defiance College football coach Manny Matsakis has seen plenty of different perspectives of the football world, from time spent as an assistant to Power Five coaches like Bill Snyder and Mike Leach, a head coach at Division II and NAIA colleges in Kansas and experience in the Canadian Football League.

Even the 58-year-old Jacket mentor hasn’t seen what he’ll see this spring at Justin F. Coressel Stadium as the Heartland Collegiate Athletic Conference announced the postponement of contact sports from the fall season to the spring of 2021.

Entering his third season at DC, Matsakis is continuing to build up the program with a mass influx of players from across the country. The move from the conference, however, was not a surprise.

“My initial thoughts were that it was something I expected for months, to be honest,” said Matsakis. “Because football is a very close contact game, I mean other than wrestling, there’s not much closer contact, it doesn’t make much sense in this climate. For small colleges to test the way the NCAA wants you to test, over a year, it could be $300,000 to $500,000 for an athletic department. That’s a lot of money.”

Despite the change and things still up in the air in terms of scheduling, testing protocol and other issues, the DC leader noted the advantages for the program with the new setup.

“If we can have a robust fall from a training advantage, it’s going to be huge,” said Matsakis. “Two of every three players on our team are freshman. Instead of coming in for three weeks of camp and then our first game, they get an opportunity to get acclimated. We’re still waiting on the legislation to come through but we’ll be able to train and lift and hopefully practice as well.

“I see it as a great advantage for us,” continued the DC coach. “I only have seven seniors, so for us it’s a benefit. If we were sitting here established with 25, 30 seniors gearing up for a season at the top half of the league, I’d probably think differently.”

After taking over the program in late July 2018, Matsakis has led the Jackets to 1-9 seasons in his first two campaigns on the DC sideline.

Even outside of the football field, the chance for the newcomers to DC and the Yellow Jacket program to become acquainted with the campus, the rigors of college life and in some cases an entirely new environment before taking the leap from high school football to the college game is an important one.

“College is very different, we’ve got over 17 states represented in our recruiting class,” said Matsakis. “How you decide what you can and can’t do (from state to state), there’s obviously concerns. Maybe this is a safer place for these kids than where they’re coming from.”

“I think it’s huge for any program at our level,” added the DC mentor. “What we’re getting at this point is football in the spring but because of retention purposes will look different in the past than in spring ball. We’re getting a chance to train and develop guys in a way.”

With the continuing coronavirus pandemic affecting things nationwide, casting doubt on some sports seasons being played and forcing the reschedule of sports seasons across the nation, plans being put in place have provided at least some stability as coaches and programs navigate the new surroundings.

“I think we’ve got a good plan, I think it’s going to work out,” said Matsakis of handling the unstable environment. “I’m excited to be able to work with these guys this fall. These high school kids have been locked up since March, so just the opportunity to go out and go to class is a big deal.