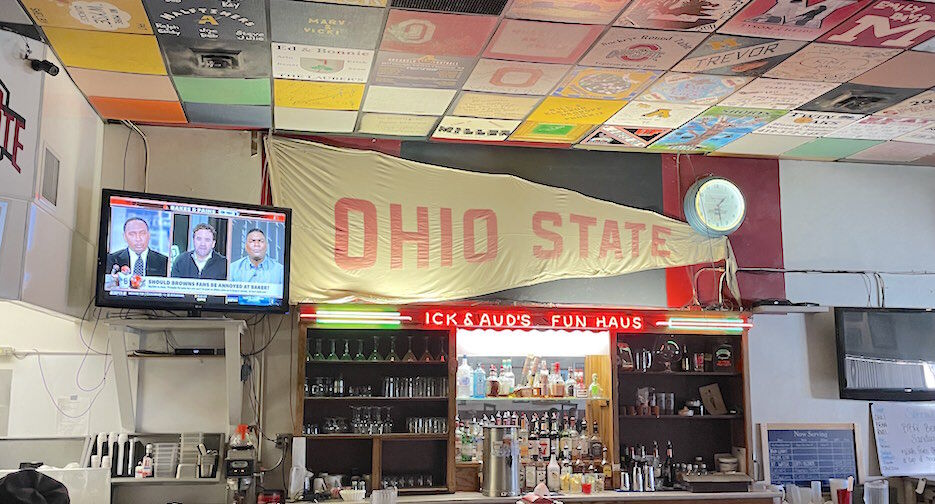 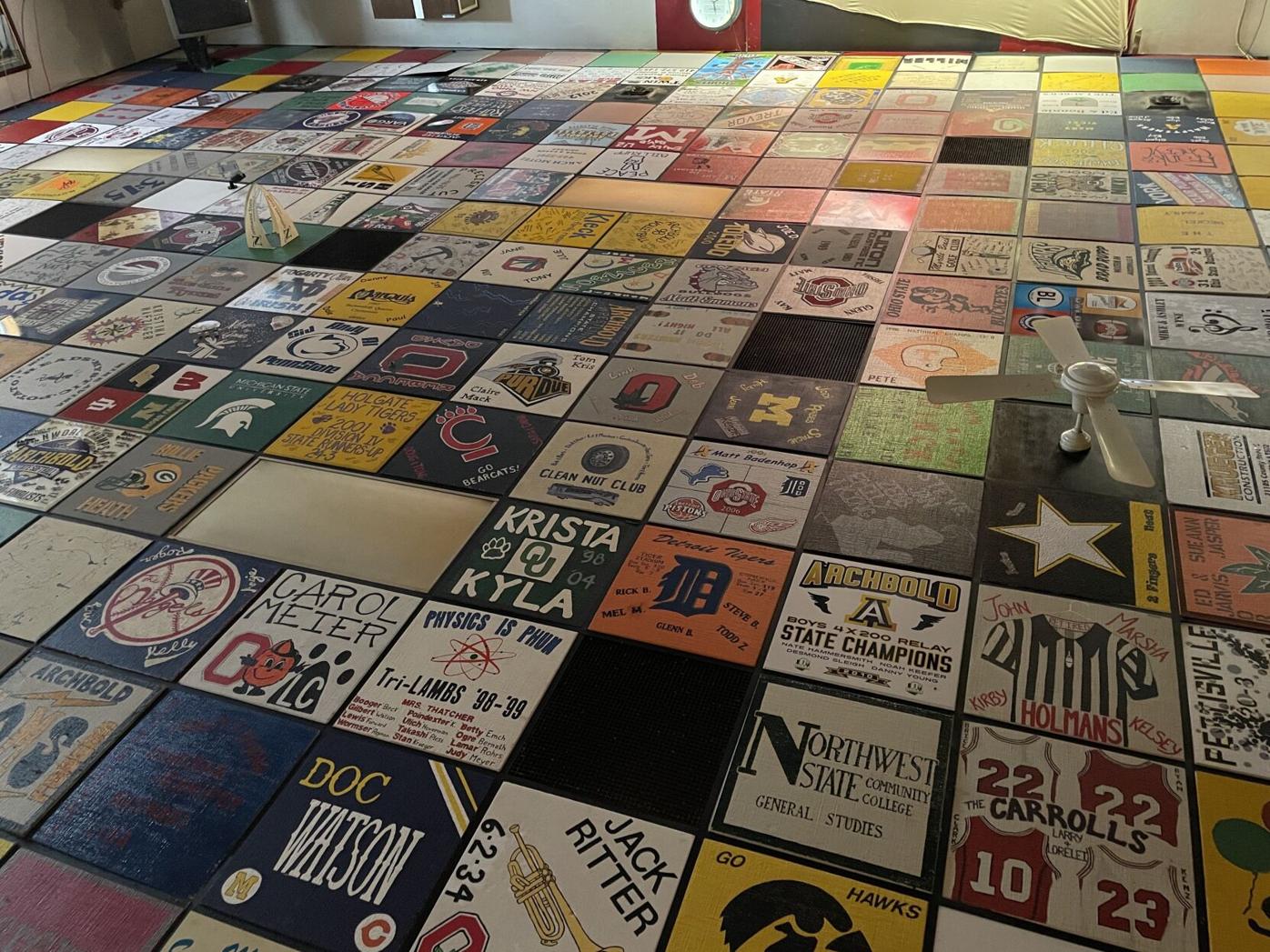 Ohio State and Michigan logos — among various other high school, college and professional teams — adorn the ceiling tiles at Ickey’s in Archbold, which has hosted local sports fans and big Ohio State-Michigan crowds since opening at its current location in 1979. 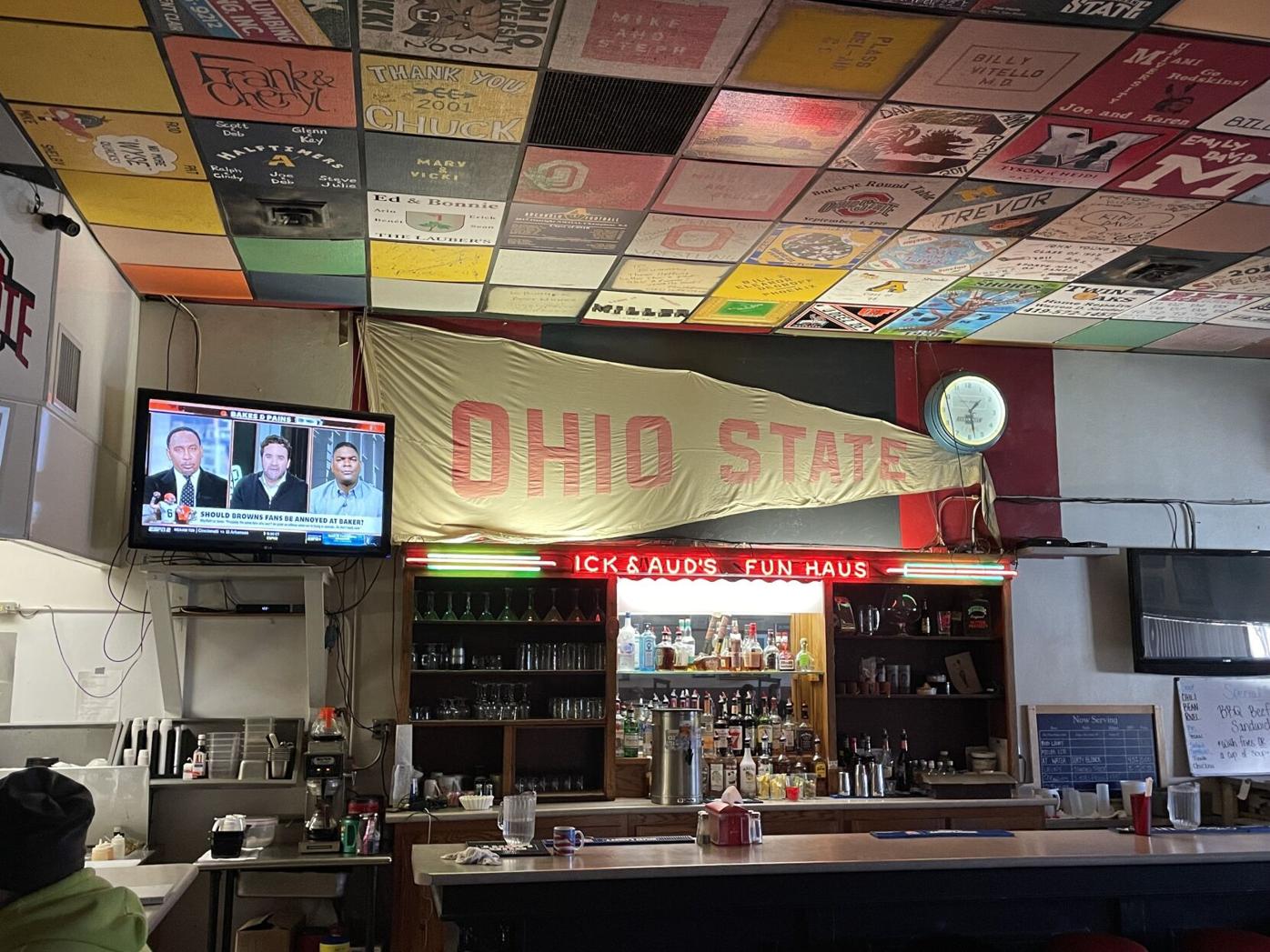 Ohio State and Michigan logos — among various other high school, college and professional teams — adorn the ceiling tiles at Ickey’s in Archbold, which has hosted local sports fans and big Ohio State-Michigan crowds since opening at its current location in 1979.

As the Ohio State-Michigan rivalry heads into its 117th meeting on Saturday in Ann Arbor at noon, Ickey’s enters its ninth decade of existence and has seen plenty of perspective on the annual battle between the Scarlet and Gray and Maize and Blue.

Dominique, 73, is now in his 52nd year of covering the Buckeyes in some form or fashion, dating back to his time as a student at Ohio State in Columbus in the late 1960s.

“I’m an Ohio State grad and the late Larry Christy and I were best friends and roommates at Ohio State. We were there during the great years of the Ten Year War,” explained Dominique over a cup of coffee in a booth at Ickey’s this week, referring to perhaps the fiercest years of the rivalry between 1969-1978 that saw Michigan earn a 5-4-1 edge over Ohio State. “At that time, my dad (Robert ‘Ickey’ Dominique) had built the original place, or had taken over the original old school hall, when I was at Ohio State and that was where the old band played. And back then, the night before the Ohio State-Michigan game became just a rallying point. It was crazy.”

Whether at its prior location on North Defiance Street in the first floor of the building that included the former Huntington Bank or the current location across the alley from the original spot that opened in 1979, Ickey’s has been a hot-spot for fans to get together and in its heyday saw some spirited nights, according to Dominique.

“I moved back here in 1979 and it was nuts in here,” explained Dominique. “There’d be people hitting the doors at two in the afternoon to get in there … I try to describe to people what the Ten Year War was like, during the Rex Kern years and then the Archie Griffin years, it was spirited, it was crazy. In the old bar there was an old prop casket for a show that was above the old back bar and after we rallied in 1975, they came and took it down, draped a Michigan flag over the top of it and marched down Main Street. That’s the sort of stuff that went on.”

Archbold’s relatively central location between the epicenters of Columbus, Ohio and Ann Arbor Mich. has also created some great opportunities for the rivalry to be experienced as well.

“It reached its apex in here by around 1987-88, probably, we had the cheerleaders in here several times, Ohio State cheerleaders were here and back then, my dad and (WMTR radio station owner) Max Smith Sr. were always promoting and had both sets of cheerleaders here on the Thursday night before the game.

“The old band would play, the lead trumpet player was Jack Ritter from Napoleon, who was a former marching band member at Ohio State, and Gene Giesige, he was from New Bavaria and Mike Miller and that band, they could play every fight song. The cheerleaders they’d get up on the shaky old bars that came out of the original place and I mean it was absolute chaos.”

Though perhaps not packed to the gills as in those days of decades past, the walls and even the ceilings of Ickey’s are adorned with memorabilia from the Buckeyes, Wolverines, Archbold Bluestreaks and nearly every ceiling tile is painted with various teams and names from the high school to professional sports ranks.

Hooked since his first ever game in person, the 1959 Ohio State-Michigan game, Dominique has continued to bring the passion to the rivalry as a host of the weekly Buckeye Breakfast Show on WMTR radio on Saturday mornings before Buckeye games.

The bug from childhood attendance caught on in Dominique’s college years as well, as he did radio reports in the early 1970s of about 20 or 30 minutes that Smith Sr. would run before games. After Ohio State’s run to the national championship in 2002, Dominique started chipping in Friday morning chats with Christy and Max Smith Jr.to talk Buckeye football and from that sprung the Buckeye Breakfast show from Ickey’s with guests from all over the rivalry in the media and football spheres.

That run continued until Christy’s passing in 2014 from amyloidosis after a 40-year stint as the WMTR sports director.

Dominique has continued the run of the show and the restaurant as Archbold institutions in a town that sees plenty of perspective from both sides of the rivalry.

“The further south you go, the split is a little less likely. You get down to Van Wert, Lima area you’re really down in deep Ohio State territory but up here … Oh, I think there’s a dead split with Michigan,” said Dominique.

With over a half-century of exposure to the rivalry, Dominique has seen the highs and lows and peaks and valleys of both fan bases, going back to the battles of Woody Hayes and Bo Schembechler of the 1960s and ‘70s, the heartbreak of talented Ohio State teams under John Cooper in the 1990s losing to That Team Up North and the current run of dominance under OSU coaches Jim Tressel, Urban Meyer and current mentor Ryan Day that has seen the Buckeyes win 18 of the rivalry’s past 21 meetings.

The oddsmakers have Ohio State as about a 7.5-point favorite for this year’s meeting and Dominique thinks that Saturday’s clash of rivals will meet that close prediction.

“I’ve said this could be the year,” said Dominique of this year’s meeting that sees OSU entering on an eight-game win streak in the 58-51-6 series in Michigan’s favor. “My issue with Michigan is, how far into their heads are they? The end goal for the two schools is different right now. Our season will not be a success unless we make the College Football Playoff, and maybe not unless they win it all. That’s how high the bar is set. With Michigan, just set the bar at having a great season and beating us in Ann Arbor and everything else will open up for you later. Can they win a national championship with that team? Probably not. But I’m encouraging people I’ve known for years and years, I refuse to rub their noses in it.”