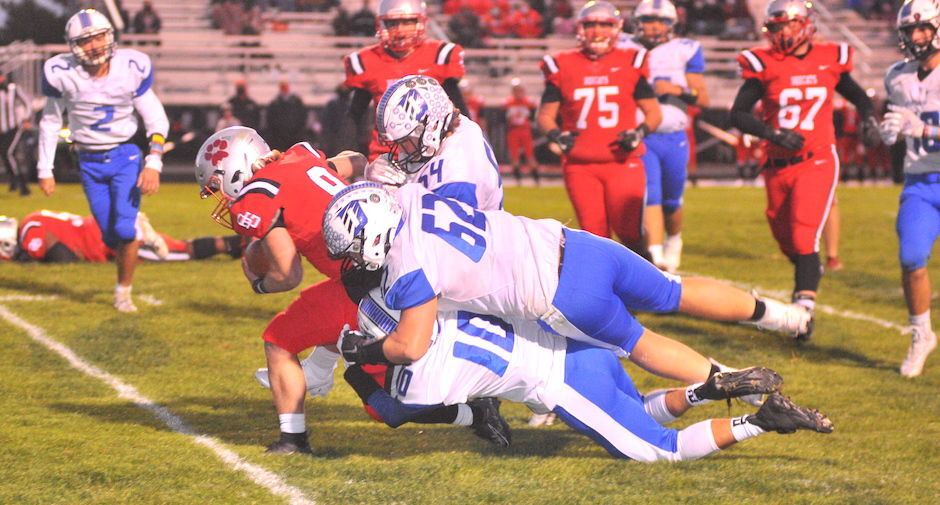 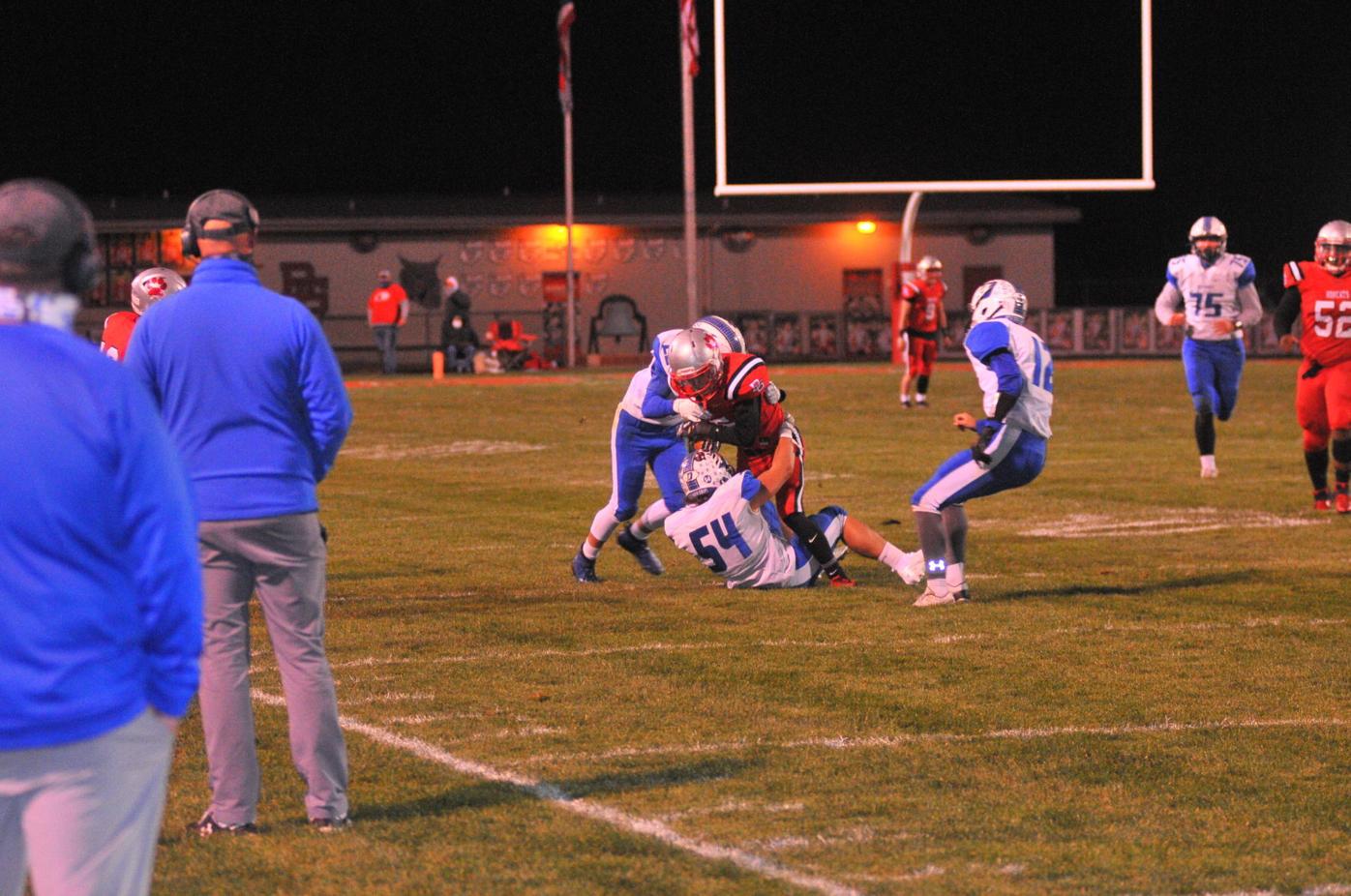 Defiance’s Zac Loose (22) and Alex Hoeffel (54) bring down Bowling Green’s Nick Powers. The Bobcats were able to jump out to an early lead in knocking out the Bulldogs from the Division III football playoffs. 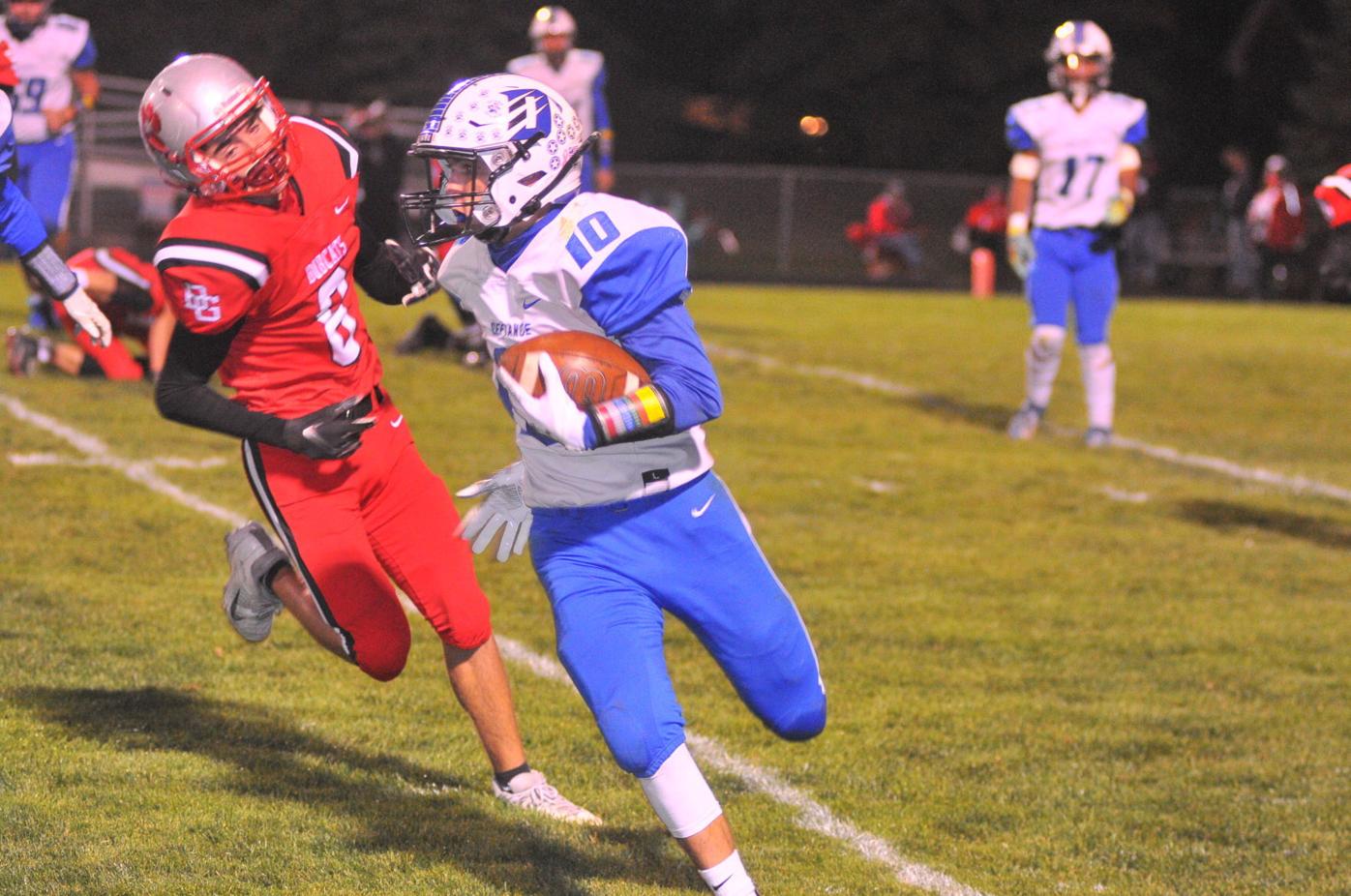 Defiance’s Zac Loose (22) and Alex Hoeffel (54) bring down Bowling Green’s Nick Powers. The Bobcats were able to jump out to an early lead in knocking out the Bulldogs from the Division III football playoffs.

BOWLING GREEN — The solid start that Defiance brought off the bus in its first-round Division III playoff win a week ago did not accompany the Bulldogs in the second round against Bowling Green as early special teams miscues sank the team’s upset hopes in a 56-13 loss to the Bobcats.

The first play from scrimmage for BG (6-1) went for 52 yards and the Bobcats cruised from there, leading 14-0 after one quarter before exploding for 35 second-period points.

“This was one of those nights where it’s Murphy’s Law, whenever it could go bad, it did go bad,” lamented DHS coach Kevin Kline, whose Bulldogs fell to 1-7 on the year with the loss. “Obviously you can’t do that in the playoffs. They’re a good team. They’re gonna win some games, I really like what (BG coach Dirk Conner’s) got going on here and he’s got a good mix of athletes.

“You just can’t afford to do what we did tonight.”

Defiance picked up a first down on its first drive before being forced to punt and the ensuing snap went over punter Jose Fernandez’s head and was recovered at the DHS nine.

Already up 7-0 just two minutes in, that lead was doubled three plays later as wingback Nick Powers bruised in for a three-yard score.

Defiance righted the ship somewhat, moving the ball into BG territory but a deflection and interception by Cayden Seither snuffed out an answer and again, the Bobcats’ option attack ground down 75 yards in 10 plays to boost the lead to 21-0 on the first play of the second quarter on a one-yard dive by Seither.

The Bulldogs’ comeback hopes still remained early in the period with the prior playcalling of short screen passes and interior running plays setting up a lob from QB Drew Davis to speedy Drew Kellermyer, who got behind the BG defense and sprinted to paydirt for a 76-yard TD reception.

From there it was all Bowling Green, which answered immediately with a return to the DHS 36 and a 36-yard TD run from Seither, his third of the game, to go back up 28-7.

A second high snap went over Fernandez’s head on the next DHS possession, setting the Bobcats upfor another score from a yard out. Compounding things, the very first Defiance play on its ensuing drive was a fumble, returned by Mason West for a touchdown.

Following a punt, BG capped off the scoring run with a five-play, 58-yard drive that ended with a one-yard Marcus Hammer TD run to create a daunting 49-7 halftime hole.

“They’re physical and they’re fast. We didn’t have a lot of answers for some of their plays,” said Kline, whose Bulldogs finished with five total turnovers (three interceptions, two lost fumbles) after not committing a turnover against Bay Village Bay. “It was obviously disappointing the way we came out and played early on. I thought we had a decent week of practice but it obviously didn’t show tonight.”

With the running clock in effect, the Bulldogs didn’t have many opportunities with the football but did punch the ball in on their opening drive of the second half.

Drew Davis completed passes of 21 yards to Juan Diaz and 19 yards to Ta’Marrion Davis on an 80-yard scoring march, aided by a pass interference penalty against the Bobcats on fourth down to keep the drive alive. Davis dove into the end zone from seven yards out to get Defiance to double digits with 6:16 left in the fourth quarter.

The BG rushing attack was as efficient as ever, churning out 344 yards on 32 rushes with a cast of characters leading the way. Seither led the way with 80 yards and three TDs on 10 carries while Ryan Jackson and Powers added 71 and 68 yards, respectively.

QB Eli Brown was not tasked with the rushing load, finishing with four carries for 49 yards and completing 5-of-8 passes for 38 yards.

For Defiance, Davis finished with a career-high 207 yards passing and a touchdown with three interceptions. Kellermyer came up just short of the century mark with four receptions for 99 yards while Kam’Ron Rivera had three catches for 30 yards and Payton Switzer three for 35.

Kellermyer led all Bulldog rushers with 33 yards on eight totes.

“We weren’t good at any phase tonight, not a single one,” said Kline. “I’m proud of our kids, though, and I’m so happy to still be playing but this wasn’t want we wanted to do when we came here.”

For Defiance, the upcoming matchup will be a Western Buckeye League regular-season tilt. A loss by Lima Bath in Saturday’s D-V Region 18 playoff game with West Salem Northwestern would send the Bulldogs to Bath while a Bath victory means Defiance travels to Celina in week nine.