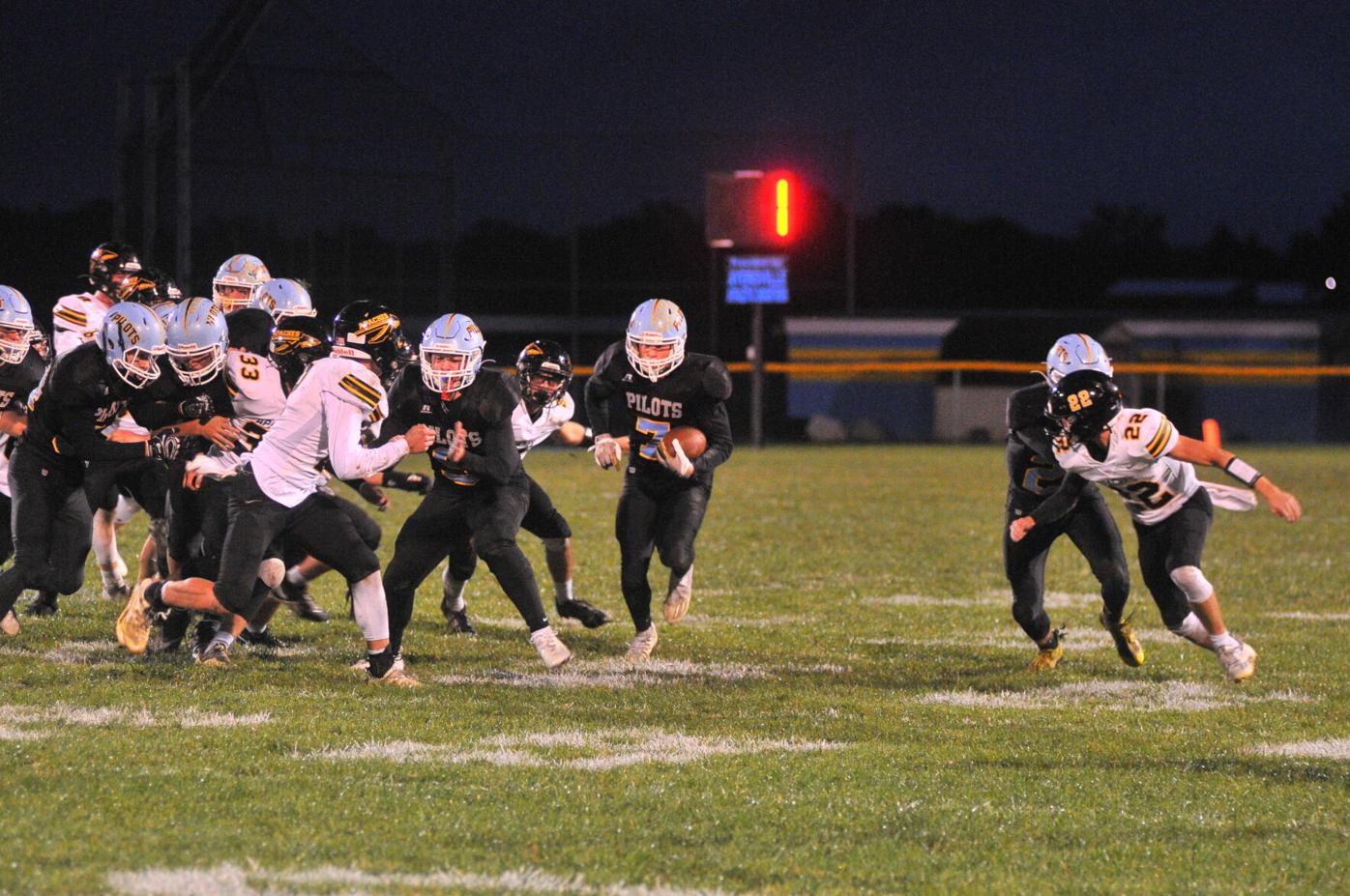 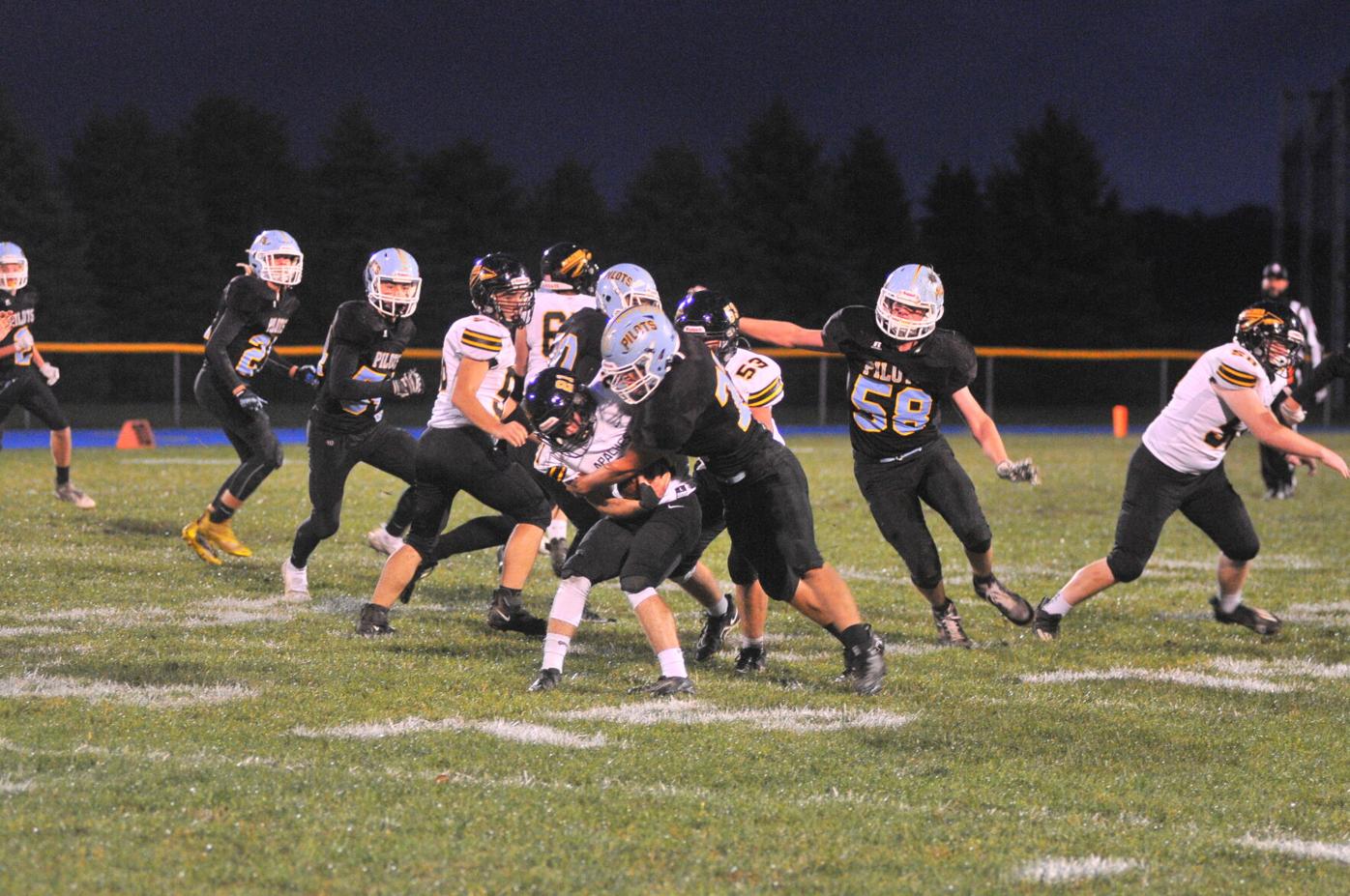 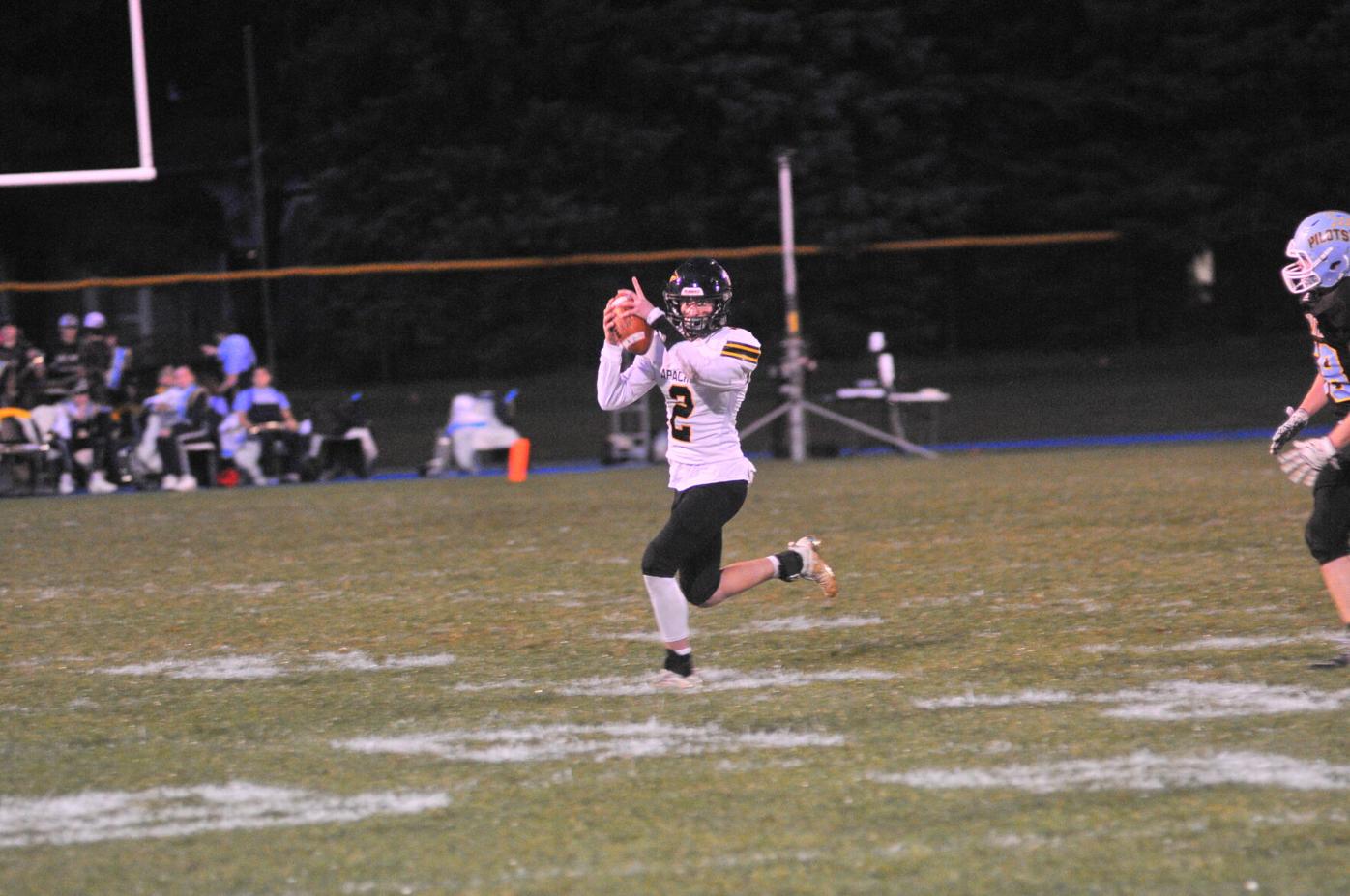 AYERSVILLE — Ayersville held off a fourth-quarter uprising from visiting Fairview as the Pilots claimed a 22-14 win at Craig McCord Field in a Defiance County and Green Meadows Conference tussle.

Owen Berner scored a pair of first-quarter touchdowns for the Pilots (5-3, 3-2 GMC), which scored eight points the rest of the way, including a pair of Bradley Young field goals. Berner rolled up a career-high 222 yards rushing on 27 carries with the two scores while the Pilot defense blocked a Weston Minic punt for a safety.

Minic came up with a play of his own in the fourth quarter for Fairview (3-6, 3-3 GMC) with a 21-yard TD reception from Brady Karzynow. The Apache QB finished with 221 yards and two TDs with no picks on 17-of-28 passing while Minic had six receptions for 55 yards. D’Andre Hastings added a TD reception with three catches for 70 yards.

Tinora clinched at least a share of its first GMC title since a run of three straight from 2013-15 in dominant fashion on Friday as the Rams blanked county foe Hicksville 48-0 at Justin F. Coressel Stadium.

The win is the eighth straight for the 8-1 Rams (6-0 GMC), which can finish alone atop the league standings with a win at two-time defending league champion Fairview in week 10.

Nolan Schafer was 8-of-11 for 84 yards and a touchdown for Tinora but the running game propelled the Rams as Tinora rushed for 334 yards on the night with Brandon Edwards, KP Delarber, Christian Commisso, Cole Sweinhagen and Dominic Graziani scoring touchdowns on the ground.

ANTWERP — Antwerp kept its stellar run going in 2021 despite five turnovers as the Archers staved off Edgerton 22-14 for their fifth straight victory.

Carson Altimus tossed a pair of TD passes in the win for Antwerp (7-2, 6-1 GMC) but none more important than a 25-yard scoring strike to Kaden Recker with 42 seconds left. Recker then converted the ensuing conversion to put the Archers up eight.

Corey Everetts found Carter Herman and Kadyn Picillo for touchdowns in the loss for Edgerton (4-5, 2-3 GMC).

HAVILAND — Wayne Trace overpowered Paulding to the tune of a 34-0 halftime lead and a 369-93 advantage in yardage as the Raiders won their 11th straight over their county rivals, 40-0.

Wayne Trace quarterback Cooper Wenzlick was responsible for all six touchdowns for the Raiders (3-6, 3-3 GMC), throwing three TD passes with 105 pass yards while rushing for three more scores with 188 yards on 16 totes.

Dawson Lamb rushed for 40 yards on 10 attempts for Paulding, which committed two turnovers and finished with 72 rush yards and 21 pass yards.

SYLVANIA — Napoleon bounced back in a big way from a shutout loss to Anthony Wayne a week ago with a shutout win of its own, a 30-0 blanking of Sylvania Southview.

BRYAN — Bryan running back Korbin Shepherd carried the ball a school-record 43 times for the Golden Bears, racking up 264 yards and four touchdowns in a 40-7 rout of league foe Swanton.

Shepherd’s record day broke a 56-year-old single-game record and helped push the senior running back over 1,000 yards rushing this season for the Bears (5-4, 3-3 NWOAL).

HAMLER — A pair of first-period touchdowns was all Patrick Henry needed as the Patriot defense held Delta to 132 yards of total offense in a 12-0 NWOAL slugfest.

Nash Meyer was 10-of-16 for 118 yards and a touchdown while rushing 26 times for 85 yards and a score in the win for PH (6-3, 4-2 NWOAL). Landon Johnson caught five passes for 93 yards and a score, breaking former Marc Krauss’ school record for single-season receptions.

Jeremiah Wolford’s 45 rush yards on eight totes was the leading offensive tally for Delta (4-5, 2-4 NWOAL), which has lost four of five since a 3-1 start.

METAMORA — A third-quarter pick-six by Tanner Kline put Liberty Center up double digits and turned the tide as the Tigers earned their fourth straight victory with a 27-0 shutout of Evergreen.

Teejay Moore tallied 107 yards and a touchdown on seven carries, including a 54-yard scoring jaunt, for LC (7-2, 5-1 NWOAL), which can earn a share of the league title with a win over Delta and an Archbold loss to Patrick Henry in week 10.