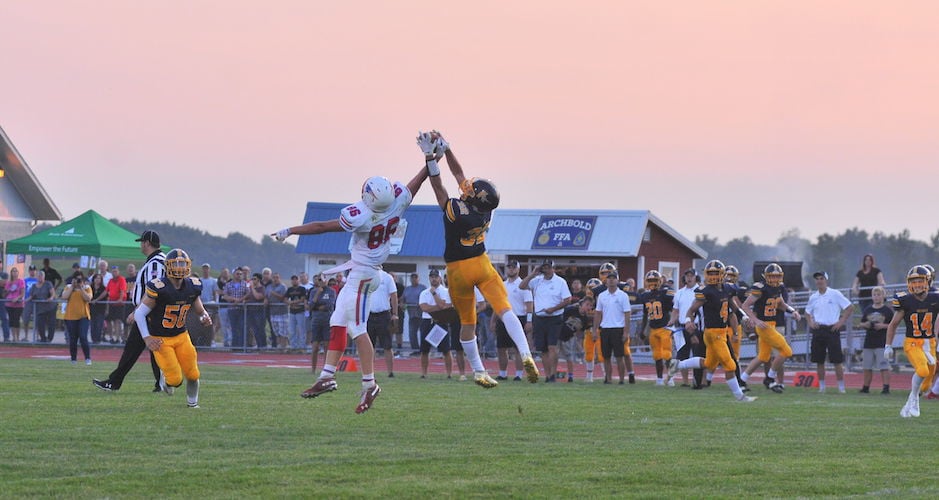 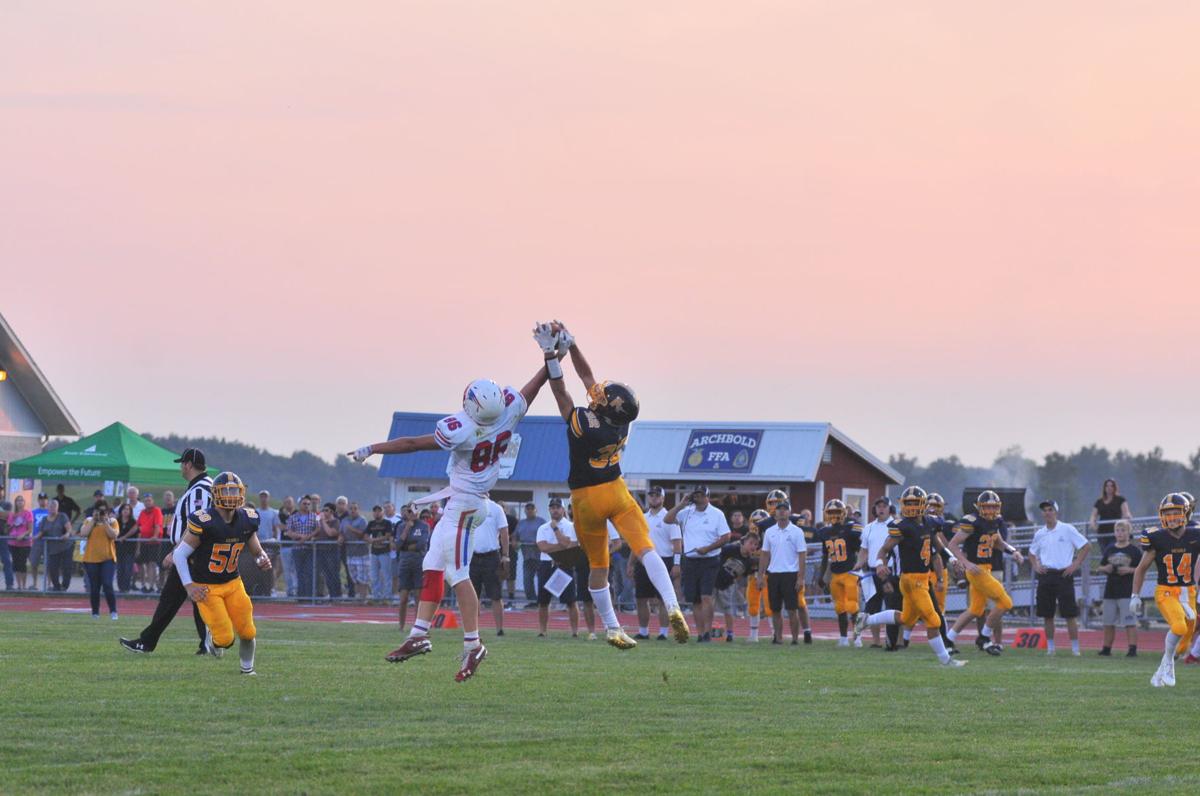 Patrick Henry’s Hunter Diem (86) and Archbold defensive back Elijah Zimmerman (32) leap for a jump ball during Friday’s state-ranked NWOAL showdown at Archbold. Diem amazingly came down with the catch but the Bluestreaks got the win, 36-35. 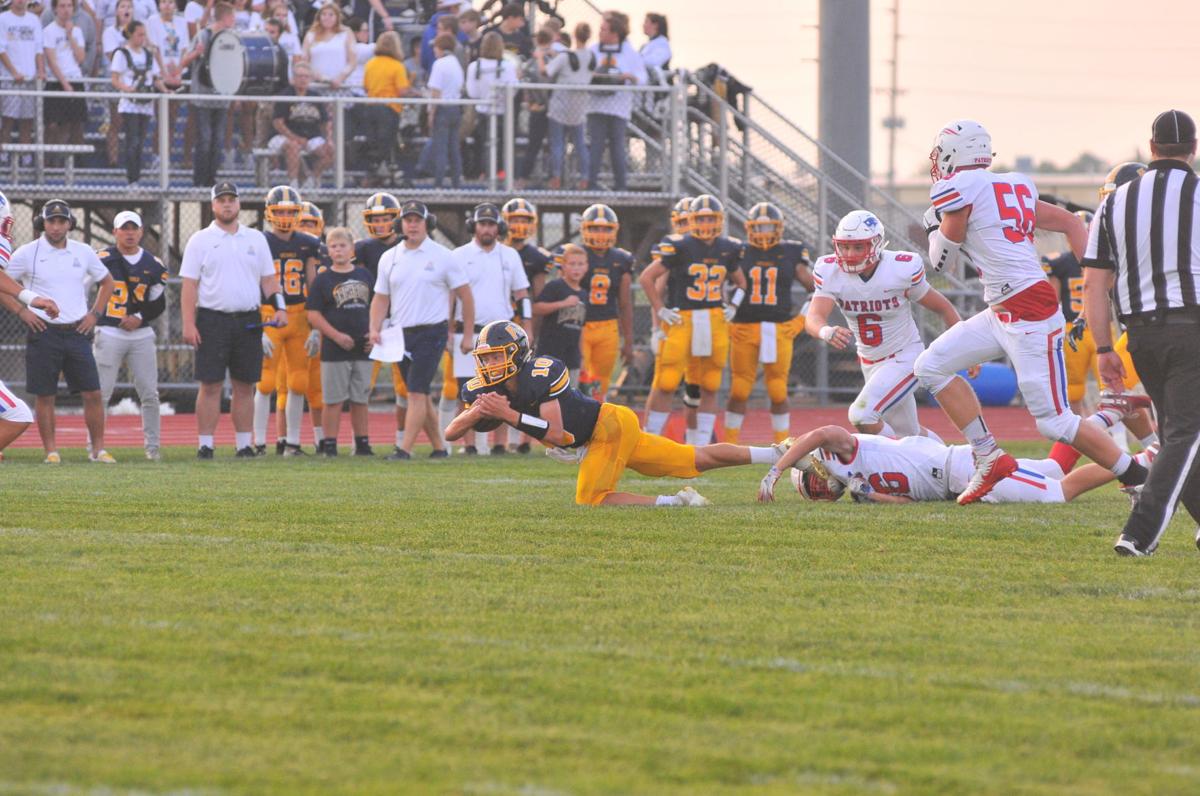 Archbold quarterback DJ Newman (10) stretches for more yardage against Patrick Henry on Friday at Archbold. Newman threw for 333 yards and four touchdowns as the No. 7 Bluestreaks (D-VI) toppled the D-VII No. 2 Patriots in a 36-35 thriller. 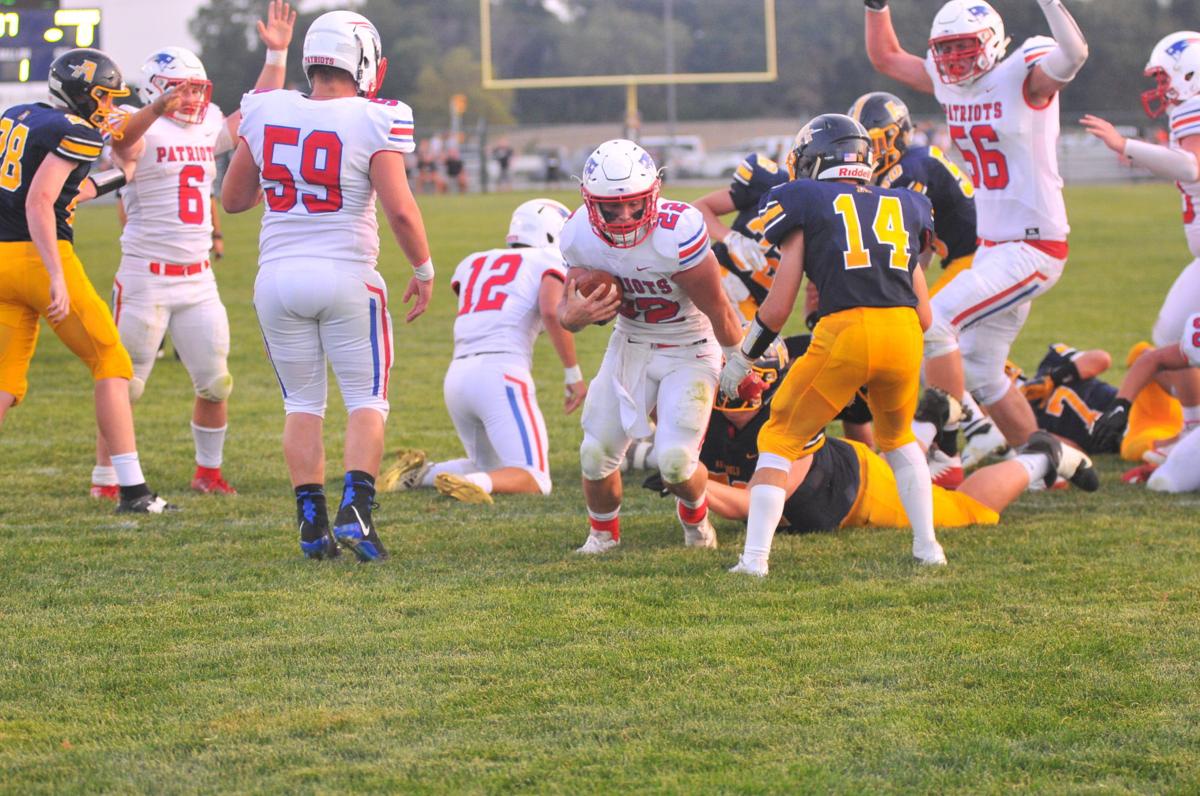 Patrick Henry QB TJ Rhamy (22) breaks through for a short-yardage touchdown in Friday’s 36-35 thriller at Archbold. Rhamy tallied 356 yards of total offense but the Patriots fell short of the win.

Patrick Henry’s Hunter Diem (86) and Archbold defensive back Elijah Zimmerman (32) leap for a jump ball during Friday’s state-ranked NWOAL showdown at Archbold. Diem amazingly came down with the catch but the Bluestreaks got the win, 36-35.

Archbold quarterback DJ Newman (10) stretches for more yardage against Patrick Henry on Friday at Archbold. Newman threw for 333 yards and four touchdowns as the No. 7 Bluestreaks (D-VI) toppled the D-VII No. 2 Patriots in a 36-35 thriller.

Patrick Henry QB TJ Rhamy (22) breaks through for a short-yardage touchdown in Friday’s 36-35 thriller at Archbold. Rhamy tallied 356 yards of total offense but the Patriots fell short of the win.

ARCHBOLD — A game that featured over 900 yards of offense came down to a defensive and special teams play as Archbold won the early-season battle of Northwest Ohio Athletic League unbeatens at home over Patrick Henry, 36-35.

With the Streaks clinged to a 36-29 lead, Tony Grime made the first great play. He gave Archbold the lead on a 29-yard pass, on fourth down no less, then on the first Patrick Henry play, he came up with an interception.

The second key play came when the Patriots did manage to score. With 3:19 left, Patrick Henry took over at the 20-yardline after a punt. Quarterback TJ Rhamy was chased out of the pocket, and from there he tossed up a wounded duck in the direction of his sure-handed receiver Kolton Holloway. Holloway was able to go the distance, pulling the Patriots within a point.

Looking at a depleted group that saw numbers go down because of cramps, Patrick Henry coach Bill Inselmann elected to go for two. The pass fell incomplete, and Archbold held on to a 36-35 lead.

“It was a smart move because we had about six kids injured,” stated Patrick Henry coach Bill Inselmann on the move to go for the win.

That lead would be tested one more time. Patrick Henry attempted an onside kick, and it appeared the Patriots had it recovered after an Archbold player touched the ball. After a discussion by the officials, the ball went to the Patriots. Before the PH offense took the field, a second huddle was called by the officials, and the call on the scrum was overturned and the ball went back to Archbold.

“I’m very proud of the way we never quit,” said Inselmann. “We kept battling. We had some injuries and put different kids in and they never gave up.”

The Streaks ran the clock down and punted the ball away on the final play of the game.

Archbold came from two scores down in the second half. After a PH score gave the Patriots a 29-15 lead, the Bluestreaks came back with an impressive drive. Going for it on fourth-and-1 from the PH 6, Caleb Hogrefe ran in a touchdown while playing the wildcat quarterback.

After forcing a punt, Archbold used a big play to tie the game. DJ Newman, who went most the way at quarterback for the Streaks, found Spencer Short for a 63-yard score after an Archbold holding call backed them up.

“Brandon Taylor is a heck of a quarterback, but we saw some things we liked,” Archbold coach David Dominique said of the change. “He really made Patrick Henry pay with his feet and his arm.”

Patrick Henry struck first when the Patriots drove 99 yards in 13 plays, chewing up 5:44 off the first quarter clock. Rhamy scored from a yard out, then kicked the extra point to put the Patriots up 7-0. Archbold answered in the second period when Newman found Antonio Cruz, who used his speed to run around the Patrick Henry defense for a 65-yard score.

It set up what would be a very exciting final seven minutes of the half. Wil Morrow, who went down with an injury later in the game, capped an 80-yard drive with a 27-yard run. Archbold coutered in three plays, with Newman going to Cruz for a 61-yard strike. The only difference is Archbold went for two after a Patrick Henry penalty, and led 15-14.

Patrick Henry had enough for one more score before the half. Rhamy found Holloway for a score in the front corner of the end zone and the 34-yard pass put Patrick Henry up 22-15 after the two-point conversion.

Archbold picked up a pair of first downs, but ran out of time in the half.