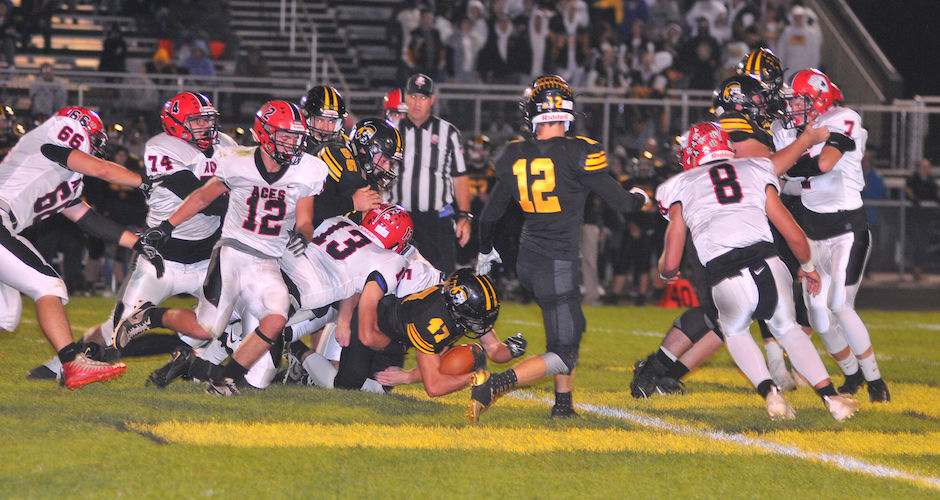 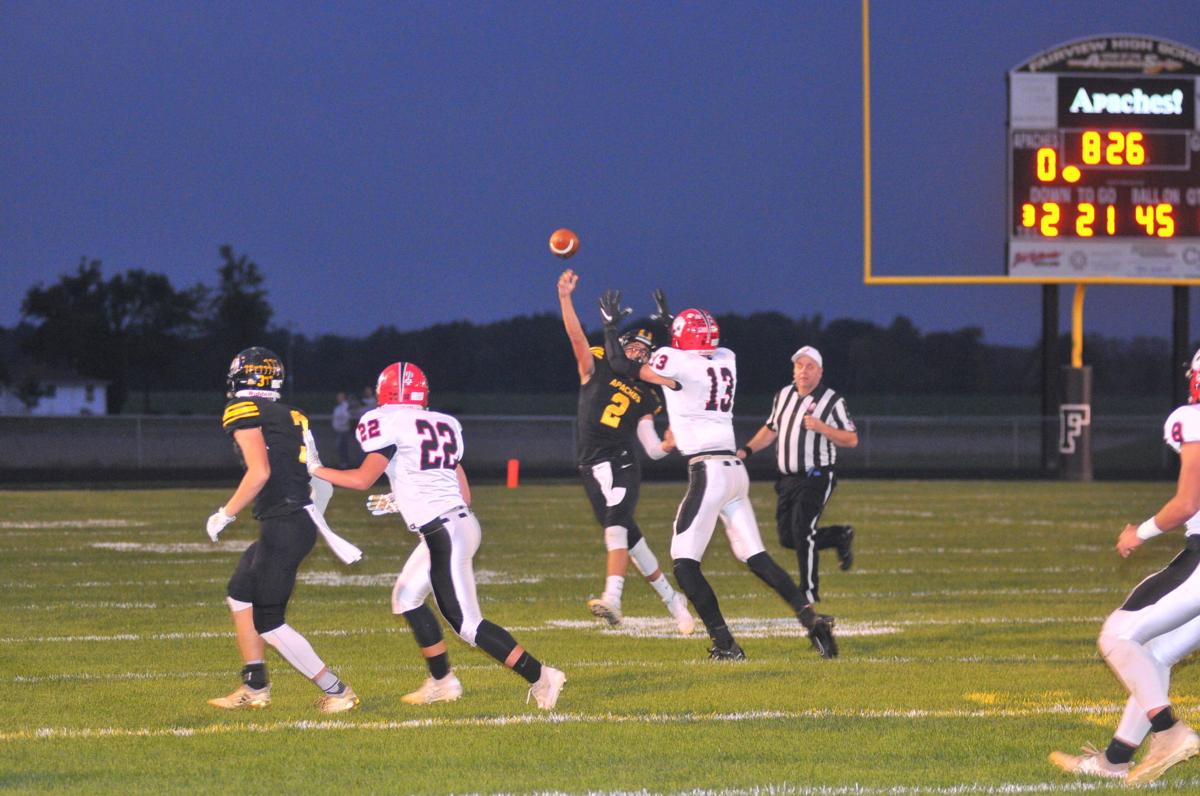 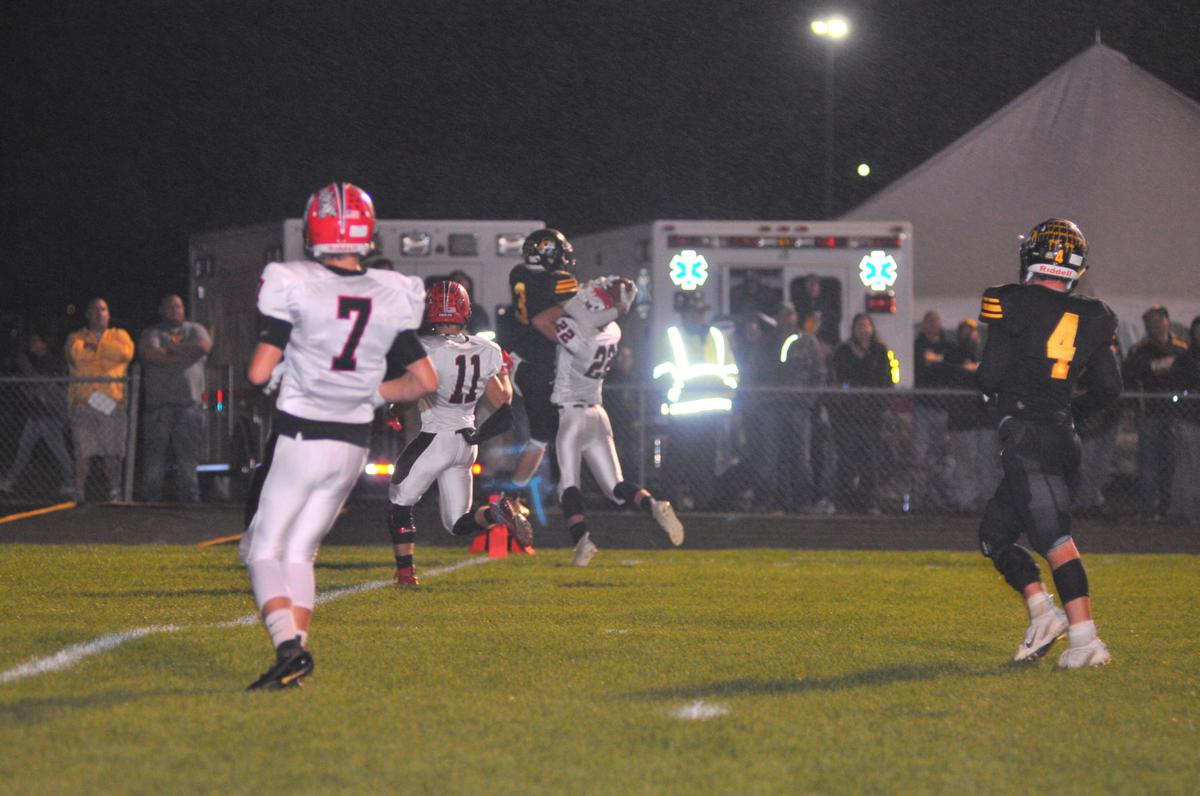 SHERWOOD — Hicksville had league front-runner Fairview behind on the scoreboard after one quarter of play at The Reservation on Friday night.

That lead, however, lasted just five seconds into the second quarter when Riley Lucas busted up the middle for a 47-yard run to paydirt on third-and three. Caleb Frank drilled the point-after to put the Apaches on top as the Black and Gold rattled off 26-straight points on its way to another Green Meadows Conference victory, 46-13.

Lucas led a run-heavy Apaches offense that churned out 259 yards and four scores on the ground in improving to 6-1 overall and 4-0 in the Green Meadows Conference.

“I like where we’re at but I think we can get better,” said Lucas. “We just have to keep going one week at a time, go 1-0 every week.”

Lucas carried the ball 17 times for 157 yards and three touchdowns on a night when Fairview outgained Hicksville, 373-123.

The defense held Hicksville to just six first downs and only three plays for double-digit yardage while the special teams came up big and the offense was tough to slow once it got moving.

“I thought we played pretty solid in all three phases,” said Fairview mentor Doug Rakes. “Hicksville got off to a really good start with that (punt) return and the touchdown. They had us on the ropes early.

Hicksville’s Mason Commisso returned a Fairview punt 71 yards on the Apaches’ first possession. With the ball on the Fairview 14, the Aces needed just three plays before Braden Langham gave Hicksville it’s early 6-0 lead with 6:48 on the clock.

The Apaches were held scoreless in the first quarter but needed just five seconds before Lucas ran for his first of three scores.

Lucas played a bigger role in the run game with a heavy and steady mist and blustery winds picking up in the second quarter. But it was Hicksville’s defense that led the Apaches to go to a running attack.

“We ran it last week, too, and we’re capable of it,” said Rakes. “That’s really where we want to be. It’s really a matter of what the defense is doing to us. Hicksville, credit to them, they had a really good game-plan early on and were taking a lot of things we wanted to do in the passing game away, so we wanted to take advantage of what they were giving us up front and run it a little bit.”

And take advantage they did.

Lucas ran for scores of 47, 64 and three yards on the night, the final two coming in the second half.

“We started off a little rough but the coaches kept encouraging, the linemen started blocking and we know once we get everything clicking, it’s hard to stop us,” said Lucas. “I knew coming into the week with Luke (be hampered by injury) that I was probably going to be in there but didn’t know when. It’s just a next man up thing. It was a slow start but the way those seven up front that were rotating there did unbelievable really the last three and a half quarters.”

Fairview still flexed some muscle in the passing game, too.

Cade Polter finished 8-for-18 with 114 yards to four different receivers and had two passing touchdowns. The first came on a third-and-20 from the Hicksville 28 when he threw a pass to Cade Ripke in the front right corner of the end zone. Ripke, while falling backward with a defender in his face, reached around the Aces’ helmet and snagged the pass for a highlight-reel touchdown and a 13-0 lead.

Polter also added a 44-yard strike to Noah Hagerman early in the fourth quarter to put Fairview up 40-13.

Hagerman also threw a dagger into Hicksville’s hopes for a win when he returned the opening kickoff 80 yards.

“Our boys did a good job especially in the first quarter, first half. We had a good ballgame going there,” began Hicksville coach Lucas Smith. “We decided to make them go into the wind that third quarter and then they returned that opening kickoff. Then got a pick and good field position. But our kids came back. Mason (Commisso) had that strip and got the ball back for us and we scored and made it interesting and then we just couldn’t make enough plays to keep it close.”

Fairview heads to Ayersville (1-6, 1-3) in Week Eight before a potential battle of league unbeatens in Week Nine against Tinora (5-2, 3-0).