Get Started
You are the owner of this article.
Edit Article Add New Article
Home
e-Edition
News
Sports
Obituaries
Crimewatch
Business
Classifieds
Multimedia
On the Wire
Reader Services
Find A Job
1 of 3 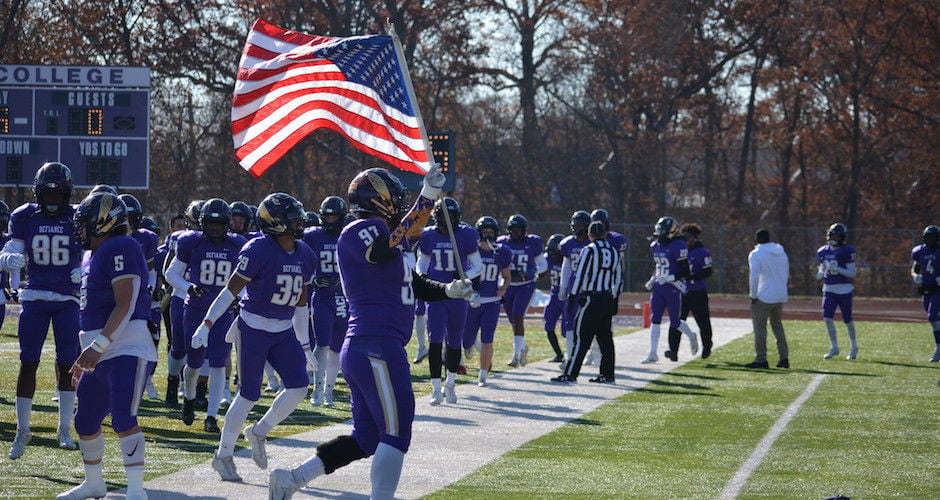 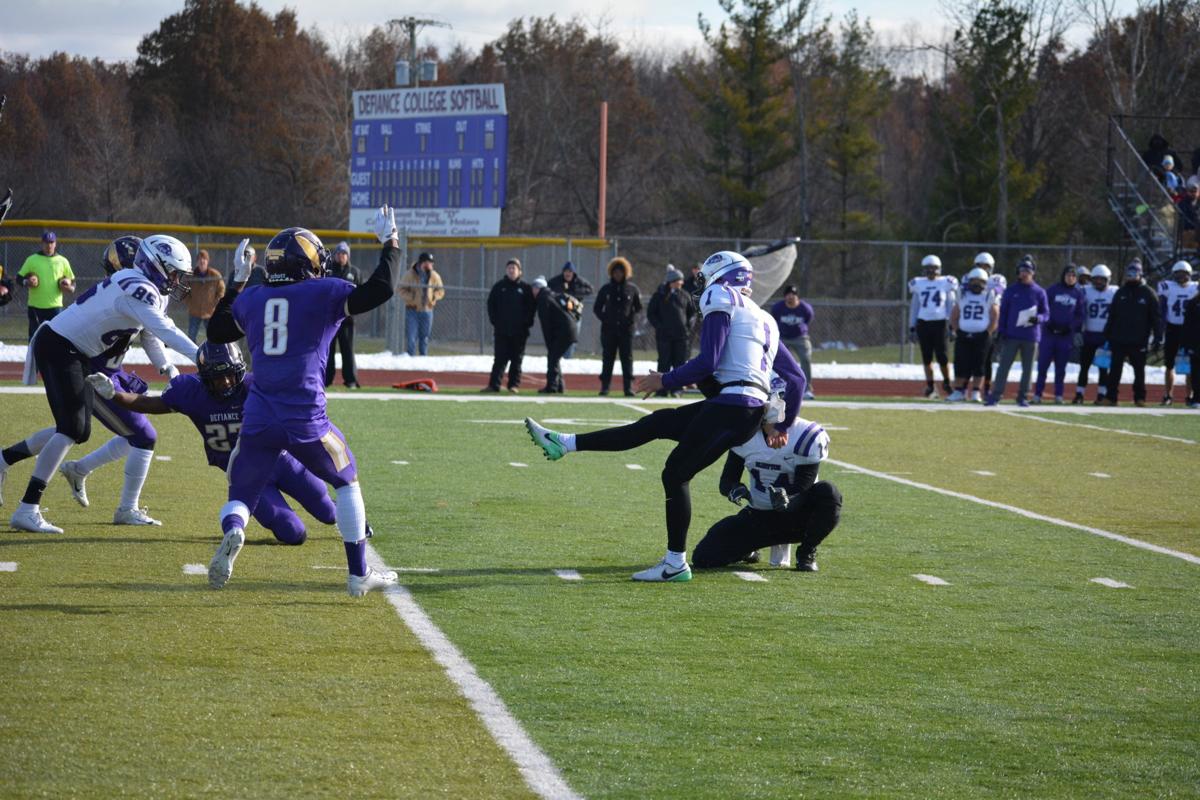 Carlens Elisias (8) and Michael Myers (27) are the first two in for Defiance as the Yellow Jackets blocked two field goal attempts by Bluffton in a 10-7 win. 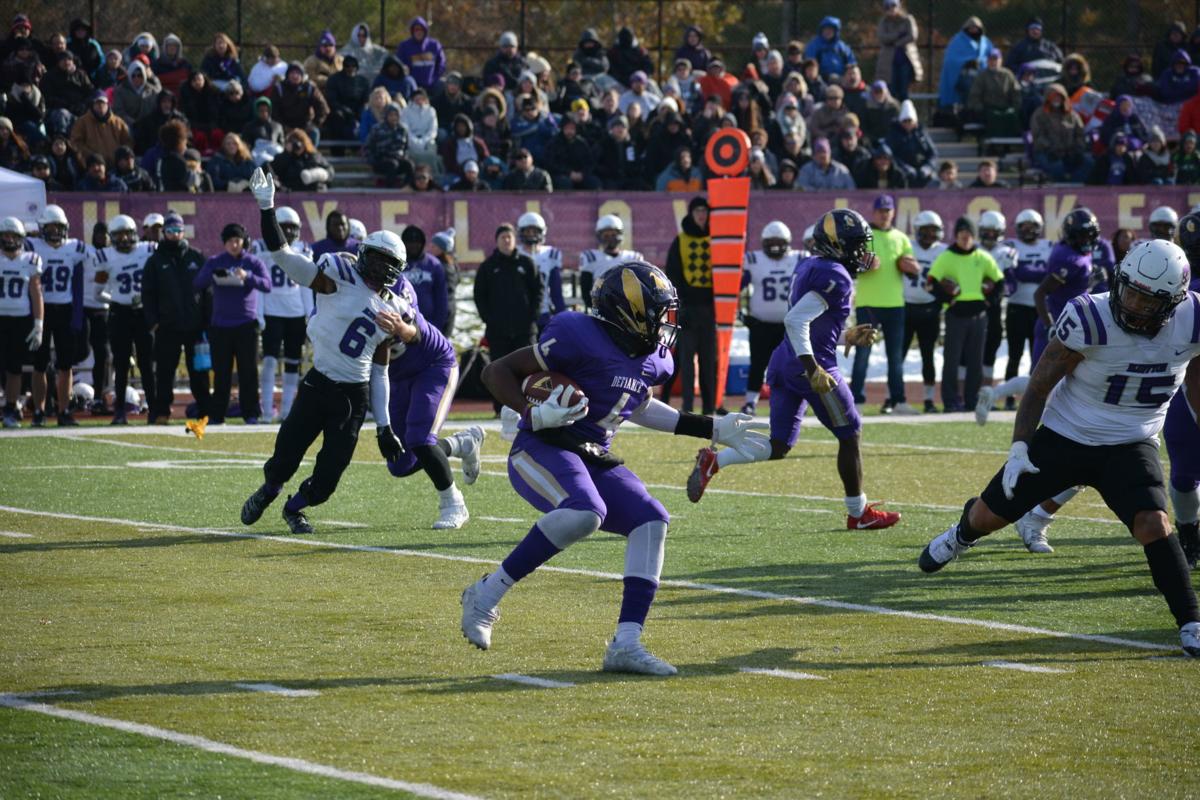 Carlens Elisias (8) and Michael Myers (27) are the first two in for Defiance as the Yellow Jackets blocked two field goal attempts by Bluffton in a 10-7 win.

The Hammer has come back to Defiance.

Needing a stop with a defense that has made plays all day, Defiance got what they needed and more, getting a blocked field goal with 1:31 left to key a 10-7 victory over rival Bluffton.

“This is the biggest one there is for us,” Defiance coach Manny Matsakis said of knocking off the Beavers. “We’re excited about it. The players are fired up about it.

“I’ve seen improvement and that’s the best thing,” the Defiance mentor added about closing the year with a win. “We’re fortunate we played well and did some good things.”

The game was scoreless until late in the third quarter. Defiance took a 3-0 lead when Andres Riley-Clark knocked through a 22-yard field goal.

“That was the only field goal we’ve kicked all year,” stated Matsakis. “That’s the only one. We’ll take it.”

The Yellow Jackets got to work from a short field when Thomas Coltrain took an interception from close to midfield down to the Bluffton 8. Defiance couldn’t punch it in, but did manage to break the ice with the short field goal.

The lead grew with a 13-play drive. Defiance chewed up 7:21 with the 73-yard drive, with all plays coming on the ground. Brandon Beckford punched in a score from four yards out to end the drive.

Bluffton, who had struggled in the passing game most of the game, found something that worked on the ensuing drive. Quarterback Zach Nobis, a Bryan grad hit on five straight passes, with the final coming in the form of a great 35-yard touchdown pass to Jontez Chaney-McClarin to trim the lead to 10-7 with 6:14 left.

The Beavers then used their timeouts to get the ball back after a short Defiance punt. Taking over in Defiance territory, Bluffton moved to the 22, where they were in a tough fourth-and-14. Going for the tie, the kicking team was sent on the field.

The 39-yard attempt with 1:31 left never had a chance as the middle of the line stepped up and kept the ball from getting neat the uprights.

The Yellow Jacket special teams made a big play to keep the game scoreless in the second quarter. Bluffton opened the quarter by driving 40 yards, but again had to settle for a field goal. The attempt was deflected right away, and the game remaining scoreless.

“Tristan Yeomans is our special teams coordinator, give him credit for that,” Matsakis said of the special teams play. “That was huge. We’ve done a really nice job in the second half of the year blocking kicks. Special teams has gone from a liability the first half of a the year to a major part of our success. It was the major difference in the game.”

The Defiance offense looked different all day. Using the week to prepare, coach Matsakis went with a different look as Terry Geiger played the game at quarterback.

“There was a specific gameplan we were working on,” Matsakis said of different look. “I thought it was a real positive thing to get Terry in there. He’s a tremendous athlete and he picked the offense. I literally created that offense for him on Sunday. All of the plays we ran, we have never run before. We repped them every day and the guys did a nice job.”

While Geiger did attempt eight passes, the Yellow Jackets spent the day on the ground, going for 156 yards on 51 attempts.

Defiance ends the season 1-9 overall and 1-6 in the HCAC.