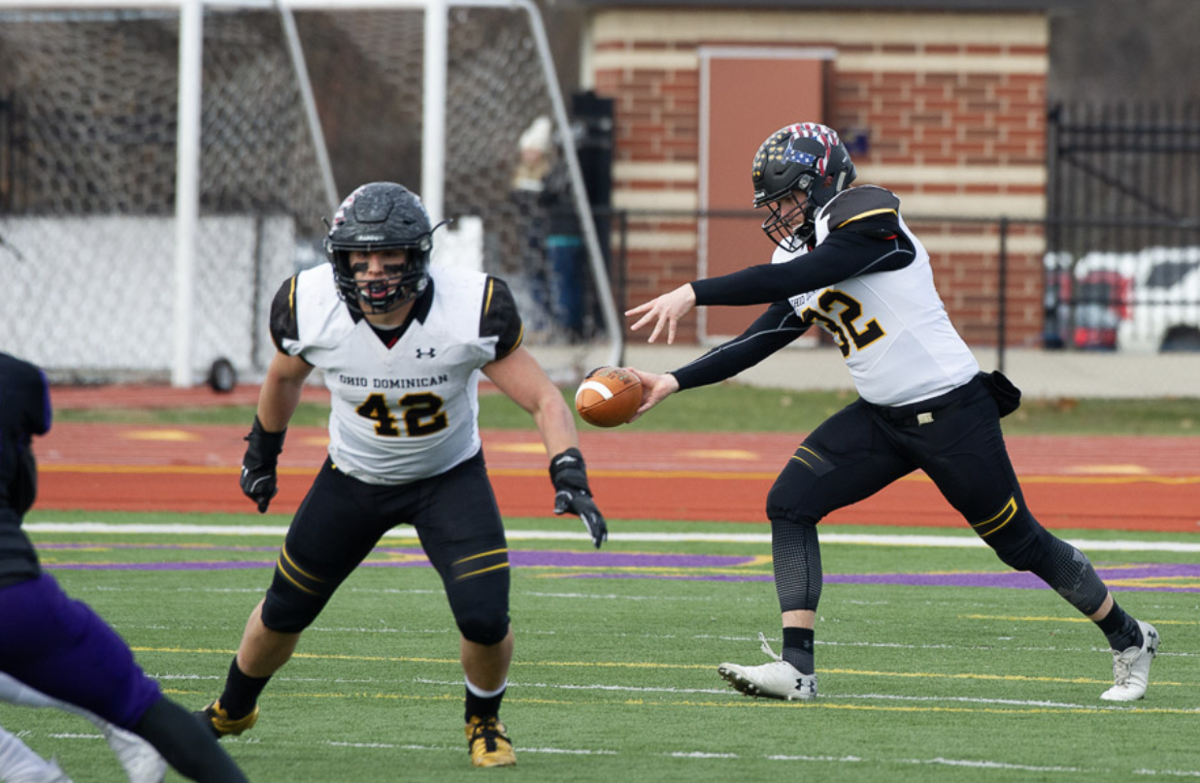 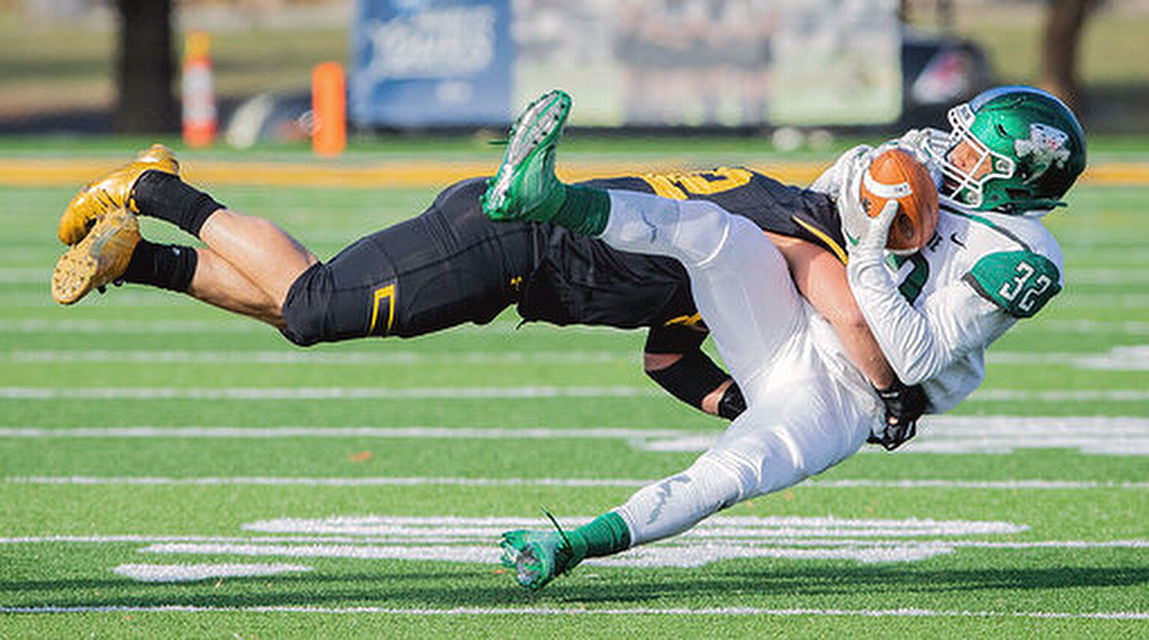 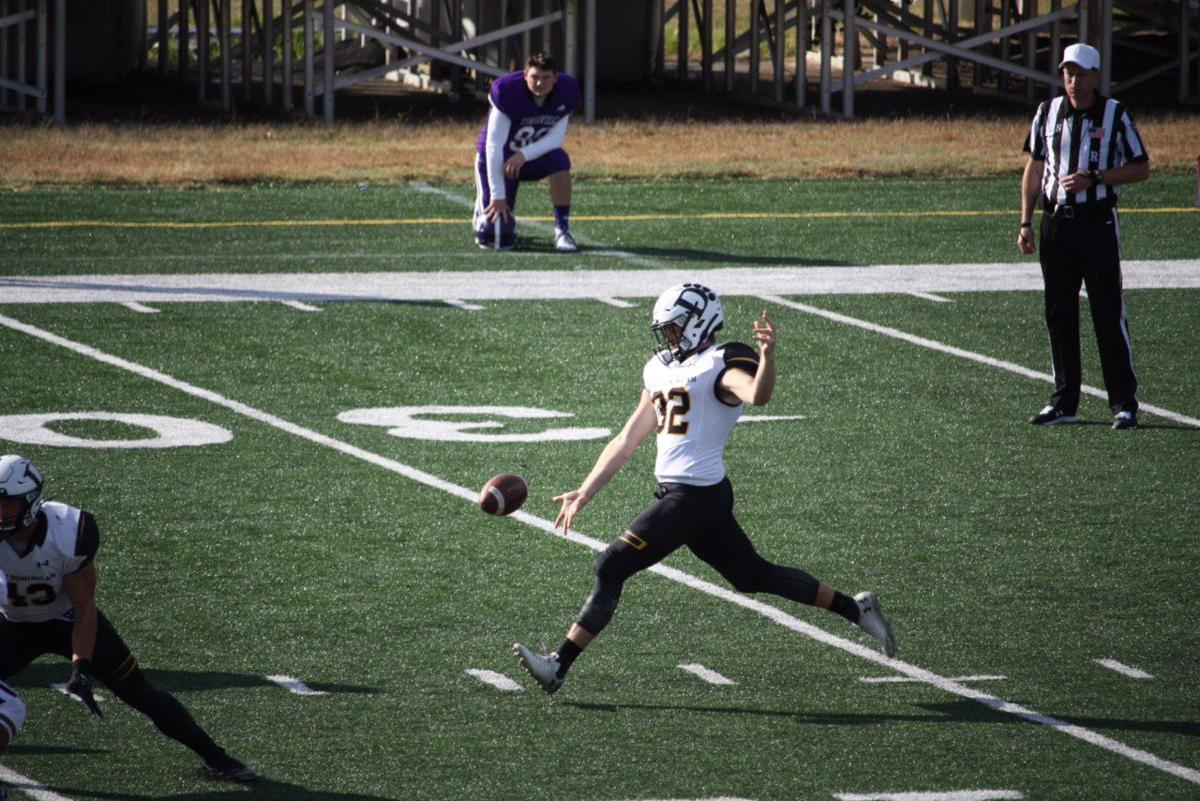 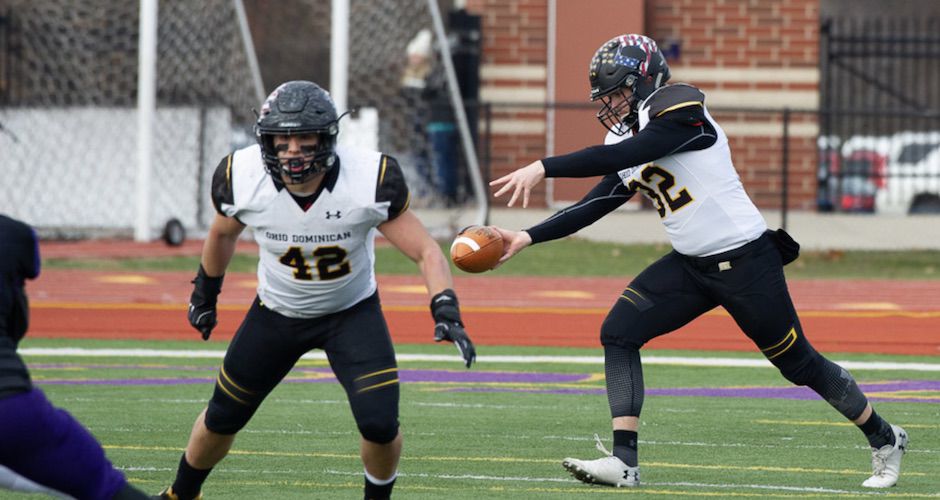 COLUMBUS — College football recruiting, especially at the smaller-school level, can be reliant on regional scouting and knowing just how fertile the ground is.

As evidenced by this past season on the gridiron, Ohio Dominican appears to have a pretty good read on the ground from this area.

A trio of local football products from the six-county area have made plenty good at the next level of their football careers for Division II Ohio Dominican, located in Columbus just northeast of the city’s downtown.

Redshirt senior offensive lineman Seth Gerken, a Napoleon grad, and juniors Dauson Dales (Ayersville) and Logen Neidhardt (Hicksville) have not only made the next step after standout careers on the high school gridiron but have also made plenty of impact on the collegiate level.

The local trio have been a key cog in the success of the Panthers over the past few seasons under the tutelage of fourth-year head coach Kelly Cummings and the ODU staff, including an assistant with some local ties.

Nick Eberle, who joined the ODU coaching staff in 2015, coaches the tight ends, special teams and running backs as part of the Panther coaching contingent after a playing career at the University of Toledo and Napoleon High School.

Along with coaching the trio at the collegiate level, Eberle was able to recruit both Dales and Neidhardt to the Panther roster, providing an opportunity to return to familiar soil.

“I lived just outside of Florida, between Napoleon and Defiance,” explained Eberle. “Any time you can be back in the area and see local kids doing well, that’s awesome. There’s some good football communities around there, all those places and it’s awesome to see all these kids doing so well at the same time. It’s good advertising to get some more.”

Continued Eberle: “I got my start at Napoleon High School working for John Snoad but there’s all sorts of good football coaches in this area. You talk about Bill Inselmann, Jerry Buti, Rex Lingruen, all sorts of good football in northwest Ohio so it doesn’t surprise me that sprinkled throughout there are some good players and some gems to be found.

“Honestly, we’ve done really well in the 419 what we call northwest Ohio but just from our little area to have three players like this, it’s just outstanding.”

Neidhardt has brought in much of the notoriety for the Panthers, especially in the past fall’s 7-3 campaign that included a second-place finish in the Great Midwest Athletic Conference, a non-conference matchup against Division II powerhouse and No. 1-ranked Valdosta State and a postseason matchup in the America’s Crossroads Bowl on Dec. 7 in Hobart, Ind.

The former Ace multi-sport standout has found his niche on the collegiate level in the special teams department with a record-setting ride through three seasons as the Panthers’ punter.

Neidhardt has excelled to the tune of a pair of G-MAC Special Teams Player of the Year awards and a first-team spot on both the all-conference and Don Hansen Football Gazette Super Region 1 teams this season. The Hicksville product averages a whopping 42.4 yards per punt on 45 attempts, placing him in the top 10 of all Division II schools and set a school record with a 73-yard punt that was downed at the one-yard line during the America’s Crossroads Bowl.

Just this season, Neidhardt has bombed 18 punts inside the Panthers’ opponents’ 20-yard line without a touchback and his career 42.2 yards per punt is the seventh highest all-time among active Division II players. The three-time all-G-MAC first-teamer has earned conference special teams Player of the Week accolades six times and will enter next season with a 67-punt streak without a touchback.

As if that wasn’t enough, the junior exercise science major also garnered a first-team CoSIDA Academic All-American accolade on Dec. 10, the only G-MAC selection from 2019.

“I have a bigger insight than most with Dauson and Logen,” explained Eberle. “Logen was a guy that you watched his highlights, he played linebacker and flew around and was a three-sport athlete at Hicksville but the ball kept exploding off his foot on film. He was getting recruited by a lot of Division III schools but I approached him and said “What would you think about just being a punter?” and he said “Hmm” and the rest is history.”

Dales is far from undecorated as well, earning a first-team all-G-MAC defensive nod at his linebacker spot and a third team spot on the Super Region 1 team.

In his first year as a full-time starter on the Panther defense, Dales racked up 97 tackles, five tackles for loss, a pair of fumble recoveries and a blocked kick. Dales finished the season in style with a career-best 15 tackles in the loss to Truman State in the America’s Crossroads Bowl.

“You talk about Dauson Dales, his dad’s a football coach and (Dauson) eats, sleeps and runs it into the dirt,” lauded Eberle of the ODU biology major. “He loves football and you can tell that he’s a student of the game. He played quarterback at Ayersville and just did it all. He just doesn’t quit. He might not be the most talented guy in the room or on the field on a given play but he’s not going to get outworked. It’s just awesome.”

Not to be left out, Gerken bounced back from a 2018 season lost to injury with an excellent campaign at left tackle for the Panthers. The former all-conference standout on the gridiron for Napoleon was the anchor for an offensive line that allowed less than 15 sacks this season and has done so for two of the past three years, leading to a first-team all-conference season as a senior.

“Seth is actually the first Napoleon kid I’ve been able to coach at the collegiate level,” noted Eberle. “I didn’t recruit him but he’s a guy that’s persevered. He’s had some injuries but he’s had a hell of a year and he’s a valuable leader to us and he’s always doing the right thing.

“All three of those guys are stellar student athletes. They’re setting themselves up for great post-football careers too.”

“For us, it starts with Ohio. We want to make sure that we’ve canvassed Ohio first before we go to Florida and go outside the state,” explained Eberle. “You look at our roster, it’s 95 percent Ohio kids. The football in Ohio is really, really goodand you can tell the difference between a football state like Ohio and maybe a non-football state like maybe an Indiana. Football’s always going to be good in the metro areas of those states but it’s not going to be as good in the sticks or in the small communities. In Ohio, there’s probably 800 schools that play high school football and they’re all coached really well.

“For us, those guys get to college and they love playing and that’s what we look for. Those guys love to compete at everything they do.