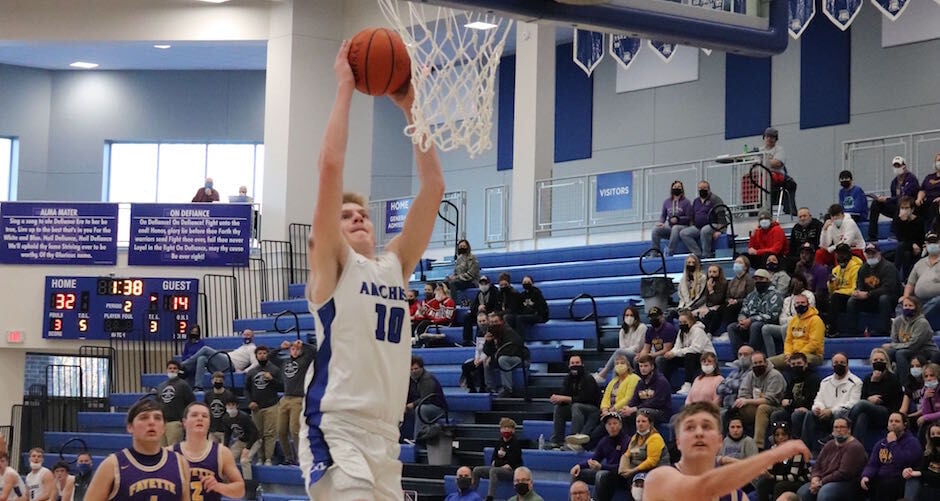 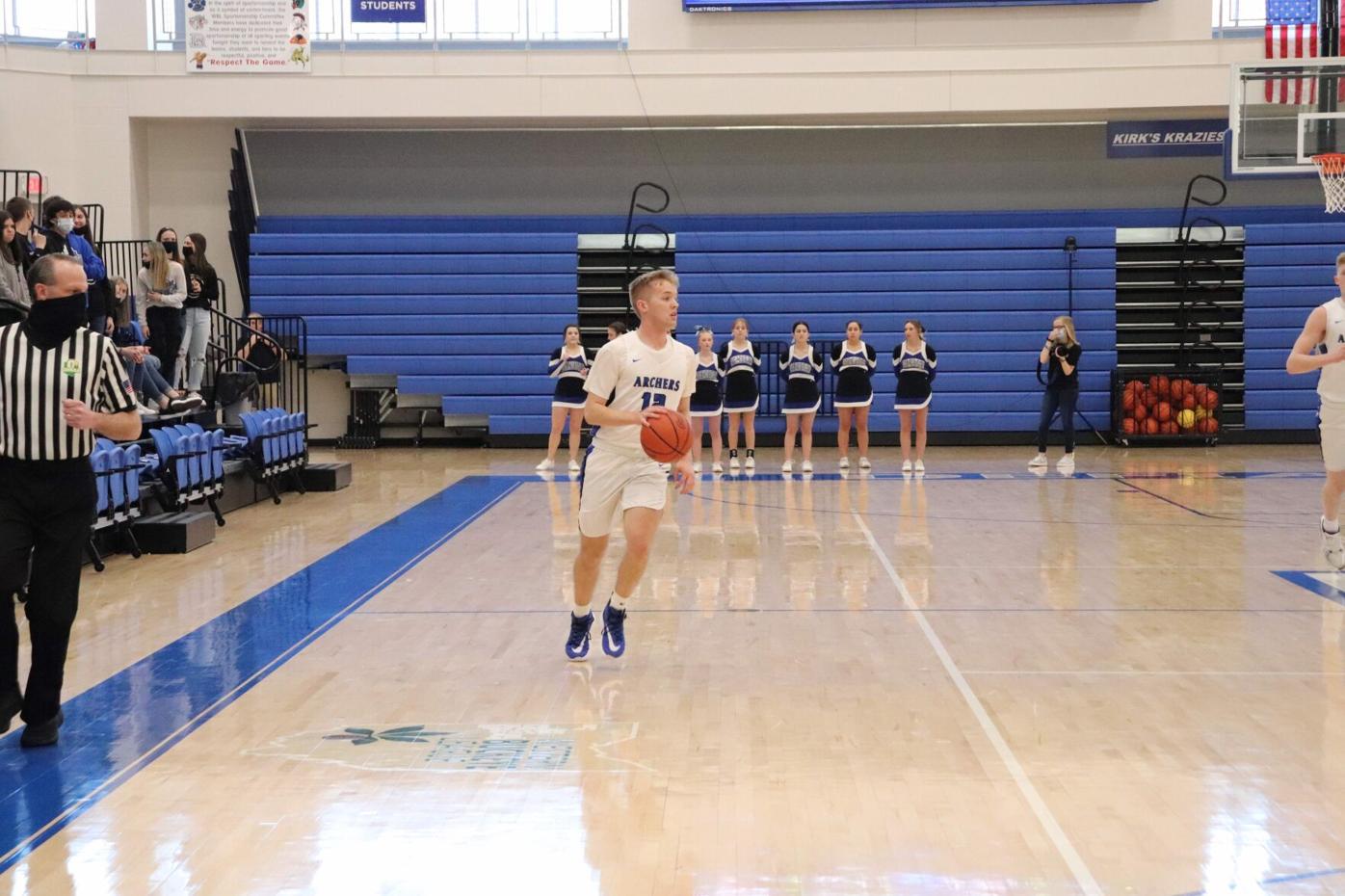 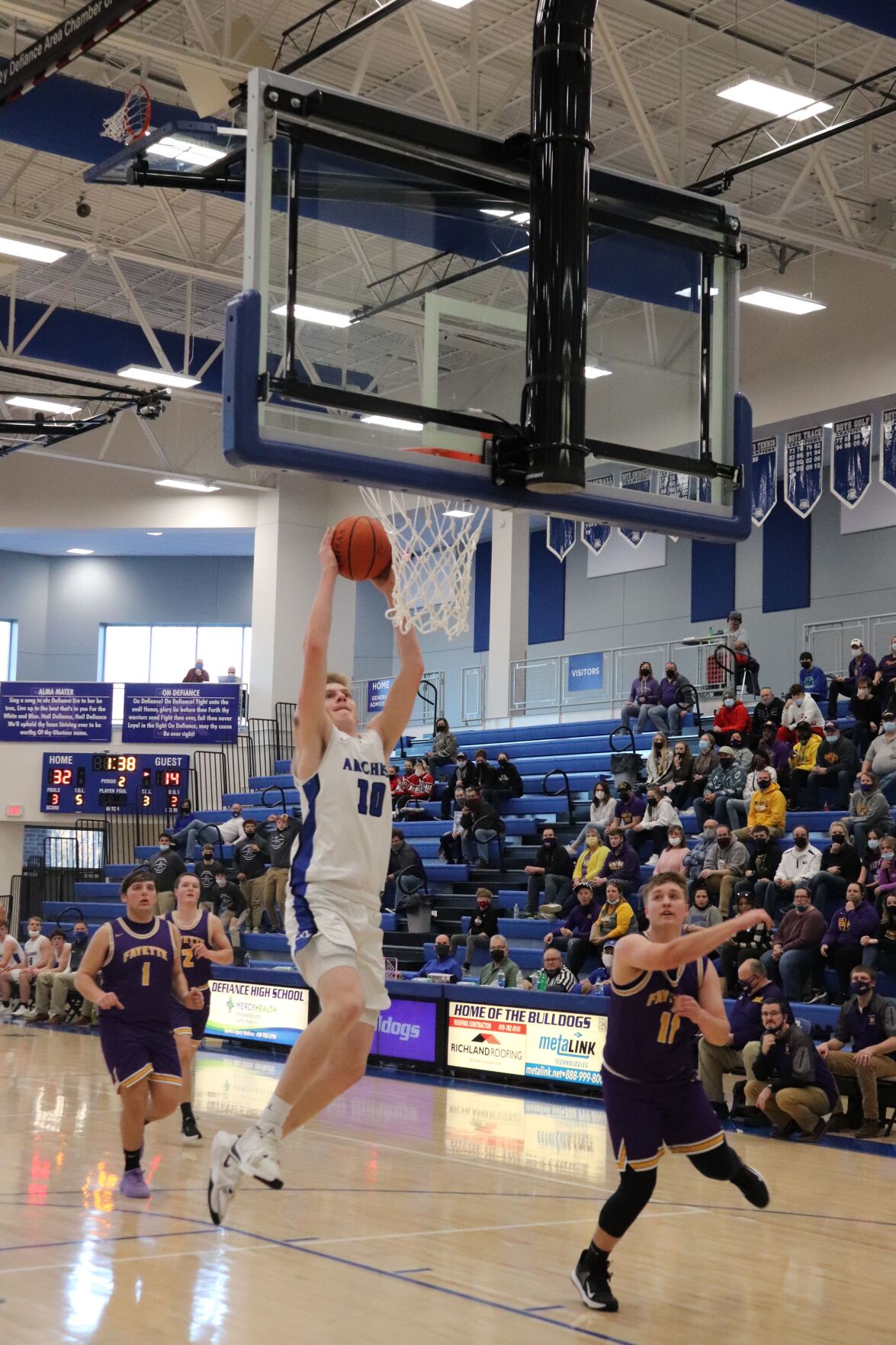 ANTWERP — There’s no substitute for experience in a basketball program, especially big-game experience under the harsh lights of win-or-go-home tournament basketball against tough foes.

Antwerp has that in spades on the boys hardwood and led by a pair of senior leaders, the 9-0 Archers have set a new standard for a proud program.

Forward Jagger Landers and point guard Luke Krouse have combined for 136 career games played through their first three-plus years in Archer blue and that span has not coincidentally matched up with a surge in the program’s win totals.

The No. 2 Archers are 73-9 dating back to 2018-19 and are two-time defending Green Meadows Conference champions, in large part due to the contributions of Landers and Krouse.

“These guys set the tone with each practice, with each game prep, watching film, studying opponents … these guys have been through so much,” said sixth-year head coach Doug Billman. “I can lean on them, the younger guys can lean on them. It’s to the point where I know in game scenarios that I can go to them and ask them, ‘What do you guys like? What do you want to do here?’ They’re the ones playing and … making the best decisions for our guys. As a coach, I don’t think I’ve ever had quite that type of experience with the skill and talent they have.”

That empowerment and experience has been invaluable through the past few seasons as Antwerp has reached the Division IV regional semifinals two years straight, both ending in heartbreaking losses to Columbus Grove in 2020 and in overtime to New Bremen last season.

“We know who our guys are and they know who we are,” explained Landers. “We’re trying to make this team better, especially in the summer when we’re all learning what our roles are going to be. I don’t think anyone’s ever like, ‘Why are you telling me to do that?,’ we all respect each other.”

Added Krouse: “Me personally as a point guard, I try to find out where guys like the pass and making guys more comfortable .. at the end of the day, all of us just want to win.”

Landers, a 6-7 forward, has blossomed into one of the top players in the area, averaging 16.4 points, 8.9 rebounds and just over a block per game while shooting 57 percent from the field. The son of former Paulding post standout Jason Landers, the University of Findlay commit recently eclipsed 1,000 career points and is just 133 behind the program’s all-time leading scorer in Dave McCalla (1,148, 1971-74). Though passing McCalla’s career rebound total of 815 is likely impossible, Landers is just four from tying Todd Hormann’s 507 career total while also sitting 91 made field goals back of McCalla’s record of 357.

On Krouse’s side, scoring hasn’t been the main ask of the 6-2 senior floor general but running the Archer offense has. Krouse, a Bowling Green State University baseball commit, has taken the role and flourished, racking up 298 career assists in 71 games played (4.2 per game) and tallying a line of 9.4 points, 4.3 assists, four rebounds and just over a steal per game through nine contests this season.

Numbers and accolades aside, the duo have helped set a new bar for a program held dear not just by those donning the Antwerp jersey but for the man on the sideline in Billman.

Billman, a 1998 Antwerp grad, is also a 1,000-point scorer for the Archers and returned to his home base in 2016 to take over the program following a decade spent at Bryan.

“I’m just so proud of what they’ve been able to accomplish and how they prepare themselves,” lauded Billman. “That’s the best thing, you take any student-athlete and they care about something that’s bigger than them. The bottom line is, they want our guys and everyone involved in our program to be successful.”

Plenty of milestones still await the Archers as Billman sits at 94 wins at Antwerp and 187 for his career. Some of the Antwerp mentor’s marks will be altered by his senior duo, however, as Landers is 50 points behind Billman’s mark of 1,065 and Krouse has already passed Billman’s third-best mark of 265 assists on his way to second in program history.

Plenty of accolades have gone Landers’ and Krouse’s way, as the former has earned GMC Player of the Year honors the last two seasons along with a second-team all-Ohio nod as a sophomore and a special mention pick a year ago. Meanwhile, Krouse has been a second and first-team all-GMC pick along with all-district nods twice and a first-team spot on the District 7 squad as a junior.

That hardware pales in comparison with the trophies the Archers have on their minds. First is a third straight GMC championship, something never achieved in school history (repeats in 1988-89, 2010-11, 2020-21).

Next, a third straight district title, a task that hasn’t come easy with single-digit wins over Toledo Christian in the district finals the last two seasons and a rugged field featuring teams like Toledo Emmanuel Christian, Ayersville, Hicksville and Fayette.

Finally, a regional title is always on the minds of the program’s veterans after No. 2 state rankings were cast aside the last two years in the quest for the boys program’s first-ever state tournament trip.

“I’ve talked to the guys like when we went to state in baseball (in 2019), we got there and were kinda just happy to be there,” said Krouse, an ace on the Archers’ pitching staff. “Toronto (the eventual state champions), they came in wanting to win both games and that’s what our mindset needs to be. We need to prepare hard again and go play to win both those games.”

“We talk about it all the time, being relentless with any opponent,” said Landers. “It could be the worst team we play all year, it could be the regional finals, we need to be relaxed and not take for granted that it’s a big stage. It’s our last one and there’s no second chance … We’ve talked about it in football, basketball and every sport, no one wants to go back and look at their last game and think, ‘I didn’t give it my all.’”