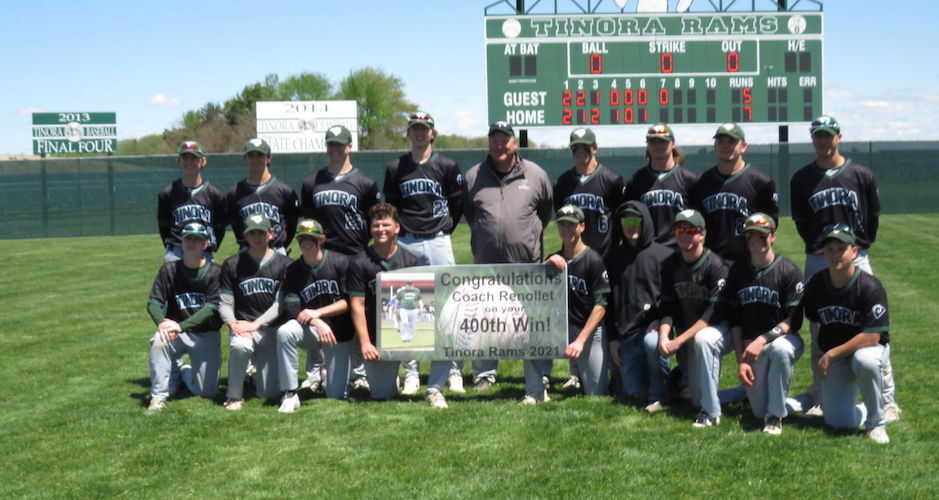 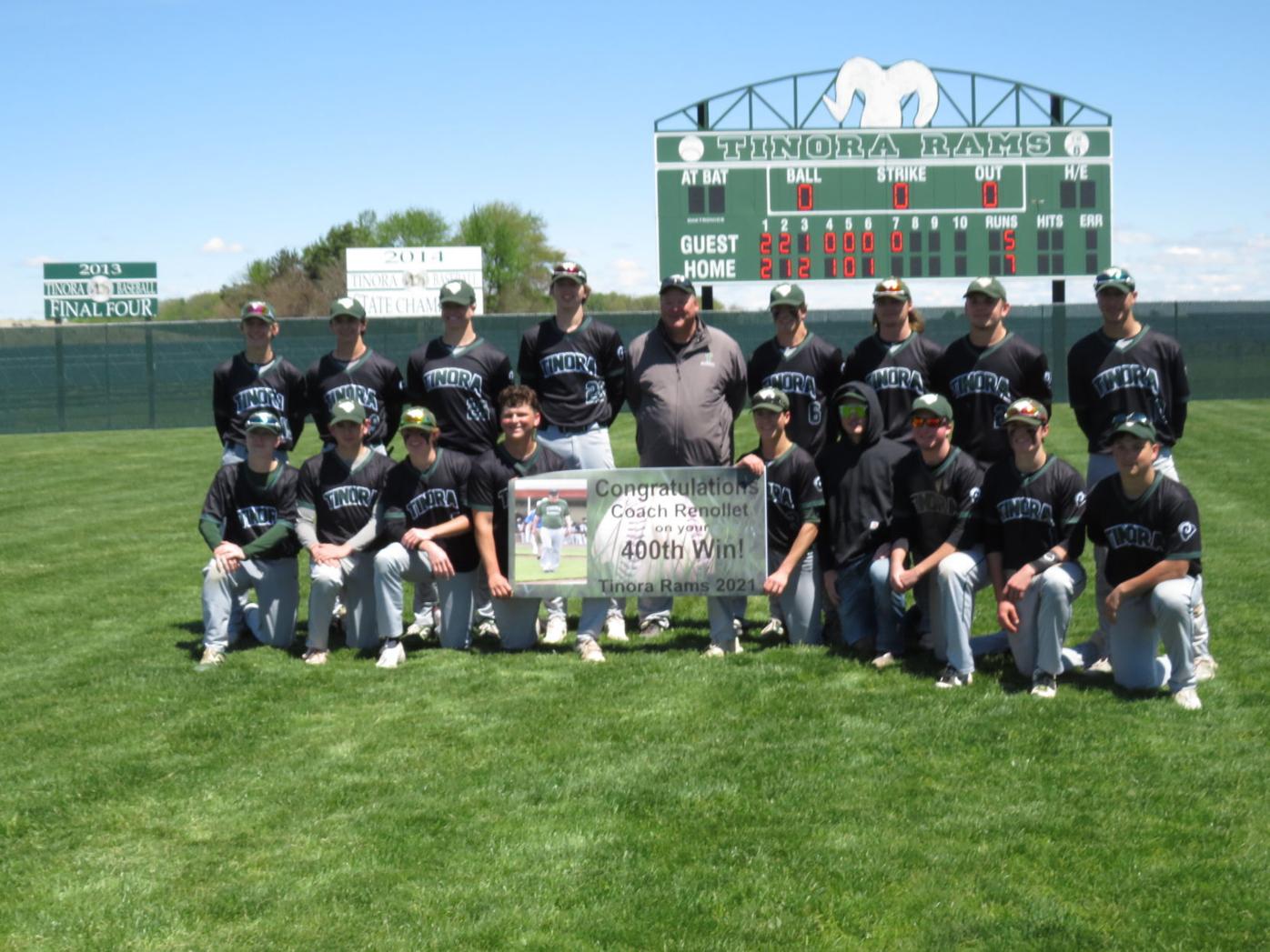 The Tinora baseball team stands with coach Brent Renollet (middle) after the coach picked up his 400th career coaching win on Saturday. 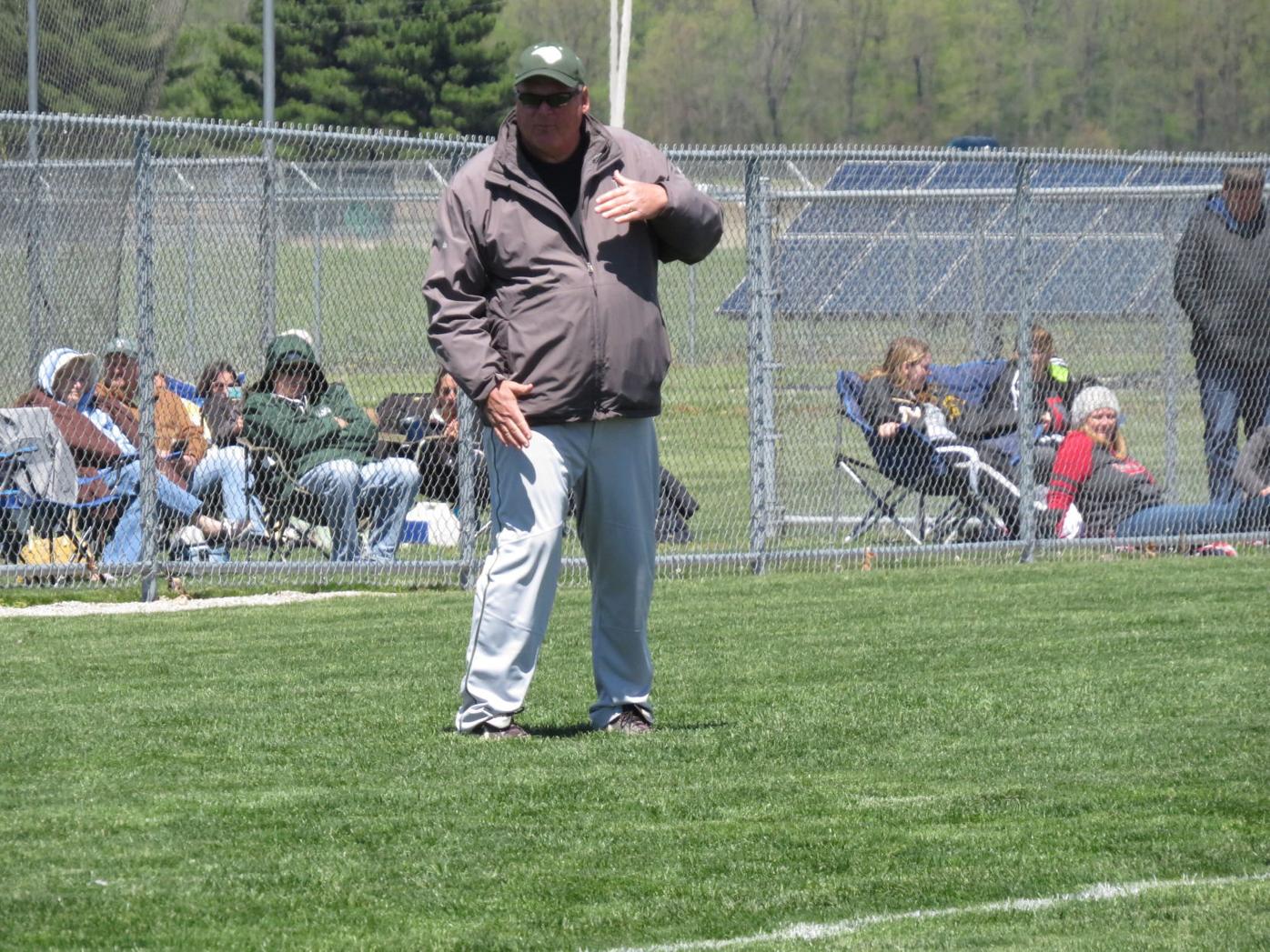 Tinora coach Brent Renollet goes through signs at third base in a game Saturday against Patrick Henry. The Rams scored a 7-5 win, giving Renollet his 400th career coaching win.

The Tinora baseball team stands with coach Brent Renollet (middle) after the coach picked up his 400th career coaching win on Saturday.

Tinora coach Brent Renollet goes through signs at third base in a game Saturday against Patrick Henry. The Rams scored a 7-5 win, giving Renollet his 400th career coaching win.

Saturday’s win for the Tinora baseball team was a special one, as Ram skipper Brent Renollet earned his 400th career baseball coaching victory in a 7-5 win over visiting Patrick Henry.

The wins came a little slow for Renollet. He started in 1988 at Delta, where he won 36 games in three years. He then stepped away from the game to coach varsity basketball for eight seasons at Evergreen and Tinora.

When the baseball job at Tinora opened up 21 years ago, Renollet decided to get back into the sport.

“I thought I was done coaching baseball when I was done at Delta,” admitted Renollet. “Then the job came open here and I was tired of coaching basketball. I was AD at the time, so I hired myself.”

The first year was rough, but Renollet made it through.

“There haven’t been many lows, to be honest with you,” said Renollet. “My first year, we had a losing record here. I started three freshmen. They were the start of making baseball relevant here. They wanted to be baseball players.”

When the wins starting coming, the Rams took off. In 2009 Renollet led the Rams to its first GMC baseball title in 36 years. Since then, he’s led Tinora to nine GMC crowns, including a 2021 title.

The key — according to Renollet — is to connect with the players, which is something the easy-going coach has had no trouble doing.

“It’s about players,” stated Renollet. “It’s about the kids I’ve had. I’ve had great talent, great kids and great parents. Most of the guys who have played for me have become friends. We still get together and do things. It’s not just that I’m their coach — and I know some coaches don’t believe in this — but I believe I’m their friend.”

While he thinks of all his players as family, Renollet also had his actual family with him. Sons Reid and Brevin both got to play for their dad and enjoy immense success.

“The high is coaching my kids, by far,” stated the coach. “Winning the state championship with both of them, that was the highest of all highs. Having my wife there, that was a high.”

Getting players to play well for Renollet has never been an issue. The wins also led to a ton of postseason success, including for consecutive trips to the state Final Four between 2011 and 2014. It all culminated in 2014 when the Rams beat Newark Catholic 4-3 in the Division IV title game.

Reid started the state championship game and went the first four innings. Brevin started at second base and drove in a pair of runs.

“That was the ultimate to have them on the team,” added the Tinora coach about his sons. “We got to hug when we won the state championship. That was the best.”

While time is starting to wind down for the veteran coach, Renollet believes he has a few more years left in him.

“I still enjoy doing it and that’s why I do it,” Renollet said on coaching baseball for 24 years. “It gets rougher the older you get, but I still enjoy being around the kids. I’m retied as a teacher, so this is my time around kids and I enjoy that.”

Another 100 wins would put him on a list with 32 other Ohio coaches with 500 career wins. Renollet isn’t sure if he can make it that far.