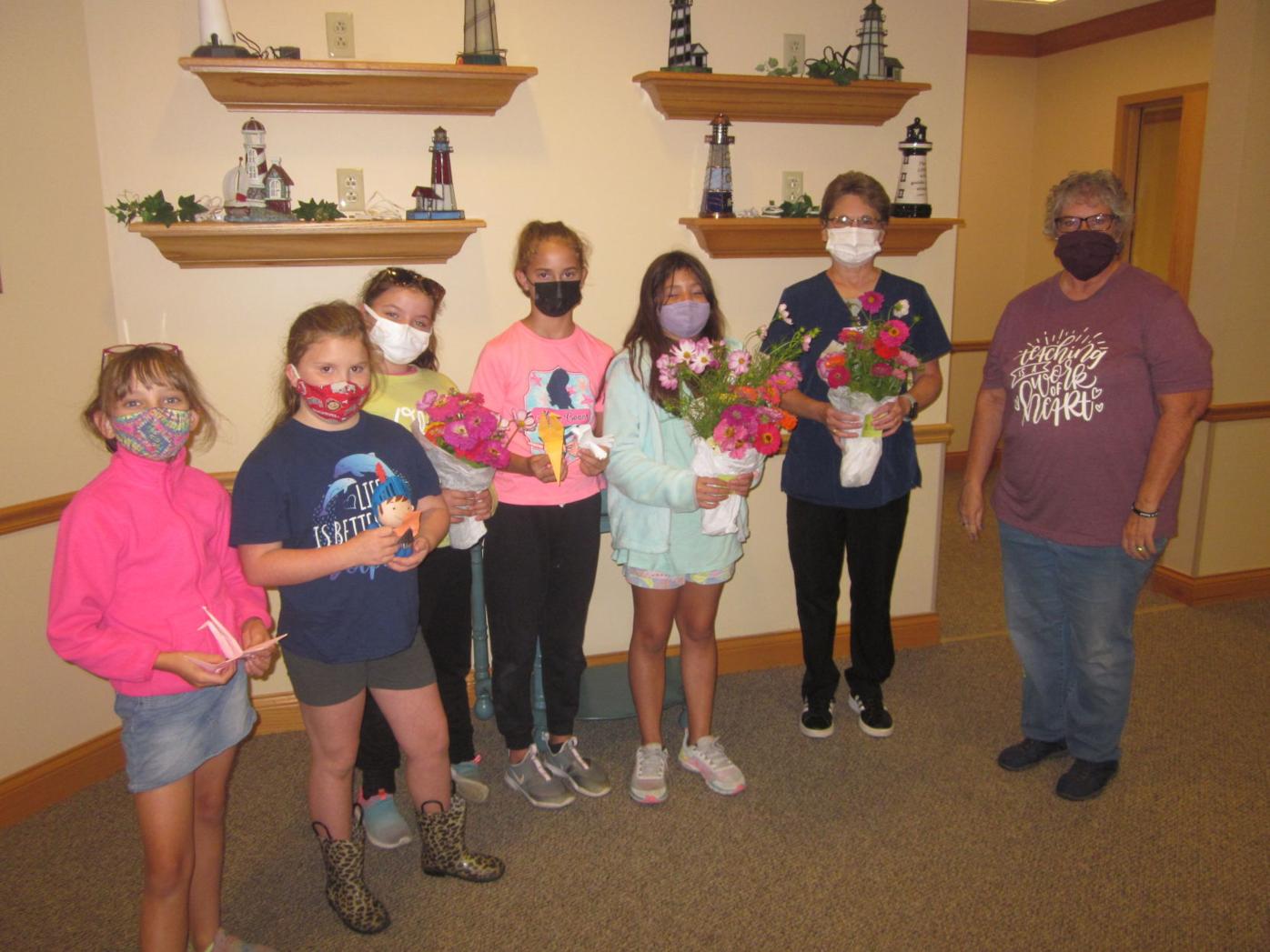 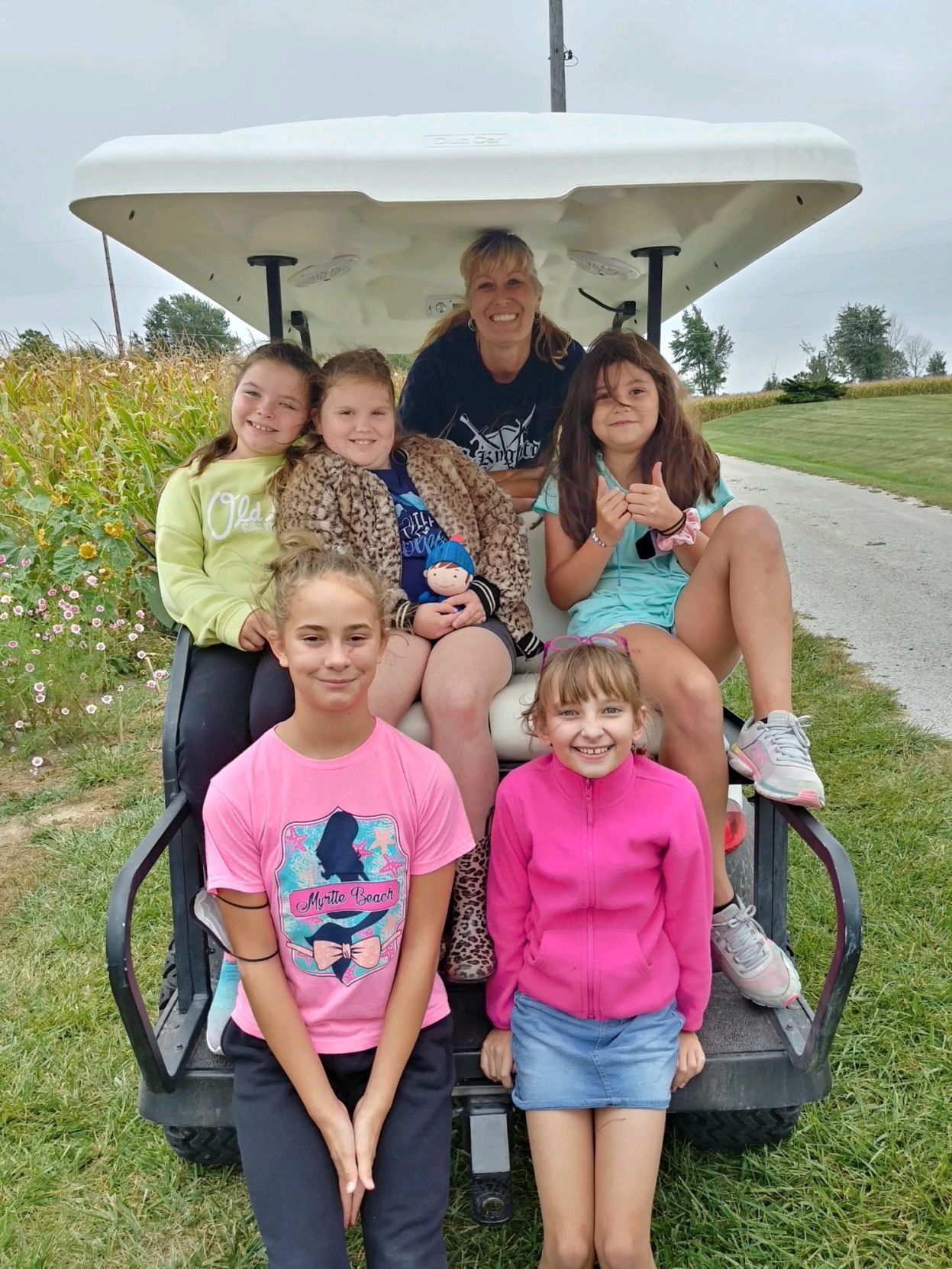 Holy Cross Catholic School fourth-grade students took a field trip to a Centennial Farm owned by the family of Theresa Rickenberg (back row), where they learned about Ohio history, and picked flowers from her U-Pick flower farm. Shown are fourth graders, from row, from left: Isabella Louderback and Olivia Frankart. Middle row, from left: Rylin Leach, Hannah McBride and Valeny Trevino.

Holy Cross Catholic School fourth-grade students took a field trip to a Centennial Farm owned by the family of Theresa Rickenberg (back row), where they learned about Ohio history, and picked flowers from her U-Pick flower farm. Shown are fourth graders, from row, from left: Isabella Louderback and Olivia Frankart. Middle row, from left: Rylin Leach, Hannah McBride and Valeny Trevino.

Educators at Holy Cross Catholic School in Defiance hadn’t taken students on too many field trips in the last year and a half, however, teachers Paula DeCola and Theresa Rickenberg synergized (worked together), to turn a recent field trip into a win-win-win.

DeCola explained a trip with family sparked an idea she shared with Rickenberg, that led to the field trip.

“When we were in the midst of COVID, I went with two of my sisters, and my mom, to a U-Pick flower farm near Toledo, because it was something we could do outside, look at flowers and pick flowers,” said DeCola. “I came back, and I knew Theresa was interested in flowers, so I told her about our trip and gave her a business card from the flower farm. She said, ‘That’s something I might go and do this weekend.’

“She went, and when she came back she said, ‘We’re going to do this at my house on our farm next year,’” continued DeCola. “She got excited, and after working with her husband and the farmer who farms their land, they set aside some land to create a U-Pick flower farm that opened this past summer. I was Theresa’s first paying customer. It was very cool that I saw how it all started.”

Rickenberg, who lives on a Centennial Farm at 29512 Flory Road in rural Defiance with her husband, Kevin, enjoyed turning a small portion of the farm into The Rickenberg Flower Garden U-Pick flower farm (now The Legacy Farm), where she grows sunflowers, zinnias, cosmos and greenery (check out her page on Facebook at The Rickeberg Flower Garden).

With fourth-grade students in DeCola’s class learning about Ohio history, DeCola and Rickenberg decided to take the students to the Rickenberg Farm, which was established in 1913. During the field trip, students learned about a Centennial Farm (history), picked flowers (where they discussed God and religion), and then donated the flowers to the Defiance Area Inpatient Hospice Center north of Defiance (which turned the field trip into a service project).

“Last year at the beginning of the year, I was working in Paula’s class and in her lesson plans I learned her students were learning about Ohio history, which I love,” said Rickenberg. “Paula and I started discussing a field trip to my farm, which ties into Ohio history. I wanted the kids to see a working farm, so Paula and I put the trip together for this year, after I started the U-Pick flower farm.

“After my mom died two years ago, I wanted to do something that would put smiles on people’s faces and give back to the community, so that was another reason I started the flower farm,” continued Rickenberg. “I started to think about what kind of legacy I could leave (in the footsteps of her mother and grandmother), so this year we renamed the flower farm, The Legacy Farm (a portion of proceeds from the farm are donated to charity).”

On Sept. 21, a total of five fourth graders went to the farm where they learned about a Centennial Farm through a scavenger hunt, learned about flowers and picked flowers, and then took the flowers to the Defiance Area Inpatient Hospice Center, to bring cheer to those at the center.

“Initially, the field trip was just about going to enjoy God’s creation, but when Theresa told me it was a Centennial Farm, we realized we could teach the kids about Ohio history,” said DeCola. “We took the kids on a golf cart for a scavenger hunt, and showed them an old saw, some old equipment, the location of the original property and the outhouse ... and she talked about the research to get the farm designated a Centennial Farm.”

Said Rickenberg: “The girls on the scavenger hunt found old milk cans, butchering kettles, the large barn made with native lumber and the water pump from the windmill from the 1913 house, as well as other items. We had a picnic in the barn, before they got to pick the flowers in the U-Pick flower farm.”

DeCola explained the trip went from a win-win (learning about history and God’s creation) to a win-win-win (donating flowers to hospice).

“We had the flowers, so we thought, why not deliver them to hospice and turn that part into a service project,” said DeCola. “We were able to go into the lobby entrance (at the Defiance Area Inpatient Hospice Center, where they met with Ronda Lewis, nursing supervisor), to drop off the flowers. The staff then distributed the flowers to the patients. It turned out to be a great day.”

Said Rickenberg: “We wanted the trip to be fun, but educational at the same time. To be able to give back, was really something Paula and I wanted to share with the kids. I had given some flowers to hospice the week before, and when I did, I was told they helped brighten the patient’s spirits. The donation was all about lifting people’s spirits and hey, who doesn’t like flowers?”