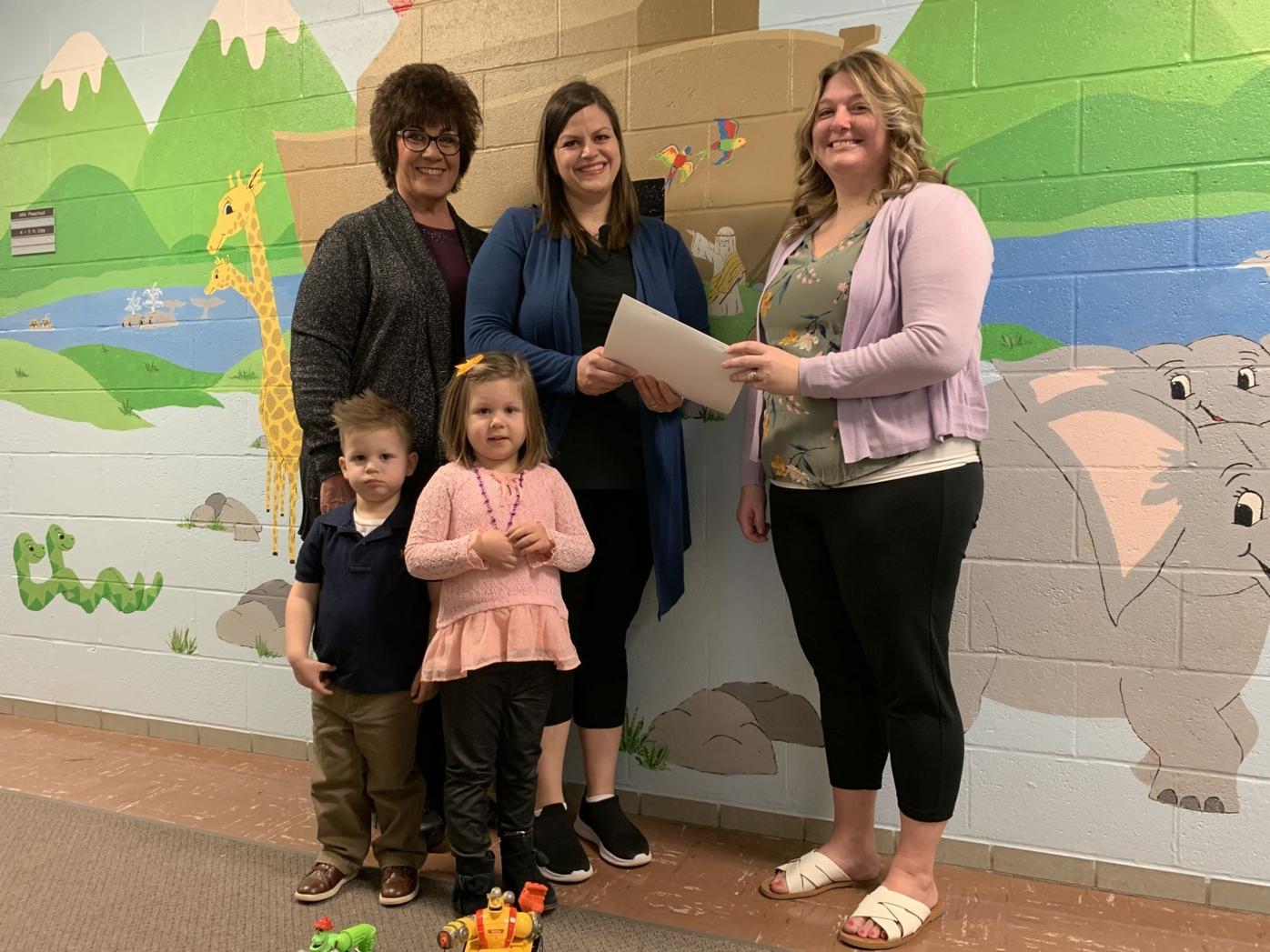 After St. Paul’s United Methodist Church in Defiance paused its ARK preschool this past September due to the COVID-19 pandemic, the newly named ARK Learning & Arts Academy has hired Kristen Davis (right) as its new director. Joshua (not shown) and Sarah Wagner (center, back row) were the first family to register their children, Jonah (3) and Ruth (4), for classes this fall. Also shown is Kristine Bartley, administrative assistant of St. Paul’s United Methodist Church. 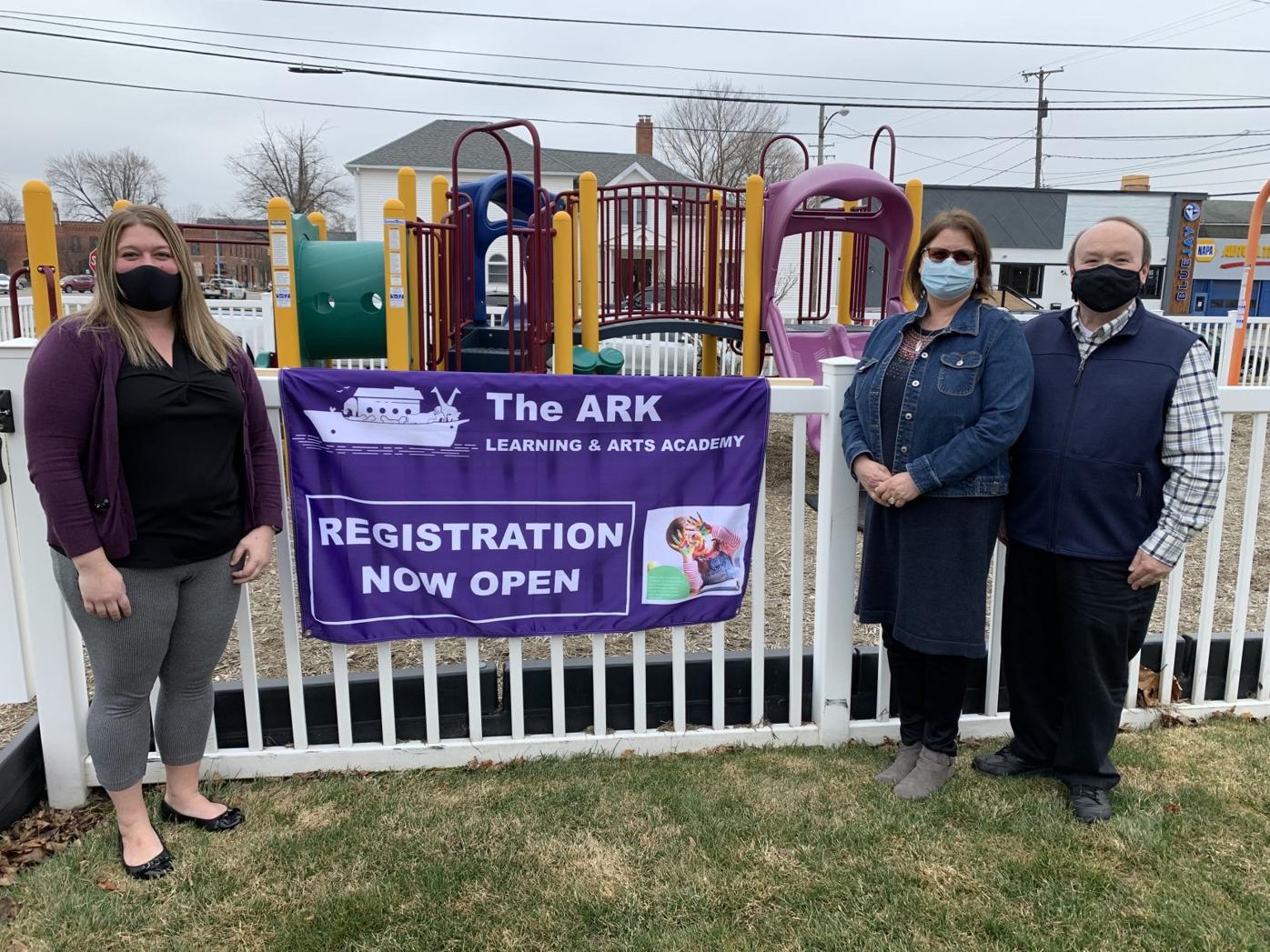 After St. Paul’s United Methodist Church in Defiance paused its ARK preschool this past September due to the COVID-19 pandemic, the newly named ARK Learning & Arts Academy has hired Kristen Davis (right) as its new director. Joshua (not shown) and Sarah Wagner (center, back row) were the first family to register their children, Jonah (3) and Ruth (4), for classes this fall. Also shown is Kristine Bartley, administrative assistant of St. Paul’s United Methodist Church.

St. Paul’s United Methodist Church (UMC) in Defiance has taken the next steps in its journey to reopen the newly named ARK Learning & Arts Academy this fall, with its recent hire of Kristen Davis as its new director.

After pausing operations in September of 2020, due to the COVID-19 pandemic, the academy will reopen this fall as both a preschool and daycare to serve better the families of working parents.

Davis, a former ARK student, is thrilled to be the new director of the academy, which will celebrate its 30th anniversary.

“I was scrolling through Facebook when I saw the posting for the job, and I thought, ‘That’s my dream opportunity,’” said Davis, a 2011 Tinora High School graduate who earned a bachelor’s in early childhood education from the University of Toledo (UT) in 2016. “It’s a great opportunity to work with kids, and to be in an administrative roll, which was my goal when I got into teaching. But I love the kids, so this is the perfect opportunity for me to do both.”

Following her graduation from UT, Davis and her husband, Zachary, moved to Charlotte, N.C., where they both worked as teachers for three years.

When Davis learned she was pregnant with her first child, son, Zander (18 months), she and her husband moved back to Defiance in 2019 to be close to family.

“We knew we wanted someone with a bachelor’s degree in early childhood education, and once we interviewed Kristen, we were impressed right from the start,” said Mouser. “We were happy to see her education background, her experience teaching kindergarten, her confidence and in learning some of the things she did in leadership roles.”

Said Strausbaugh: “What set her apart is she was raised in the community, went to ARK, and is a member of St. Paul’s (UMC). She understands the demographics here and what we are all about.”

Although her official duties won’t begin until June 1, Davis is ready “to hit the ground running,” to be ready for ARK’s reopening.

“Right now we’re working on getting our families registered, getting our classrooms back together (the classrooms are undergoing renovations), hiring additional teachers and aides and working on the budget,” said Davis. “We plan to go with a whole new curriculum, designed by our staff, so we can make changes as needed as we move forward. The curriculum will be faith-based, and we’re working with Pastor John (Schlicher) on that.”

The curriculum will include not only educational opportunities for all students, but art opportunities as well. The academy will be open each day from 9 a.m.-5 p.m., with drop-off beginning at 8:30 a.m. Early dismissal will be available at noon and 3:30 p.m., if needed.

“I’m just very excited, I never thought having this opportunity would ever happen to me,” added Davis. “When I moved back, I kind of felt out of place, I had gotten used to big-city living, but when I saw the job posting, I thought, ‘I went to preschool there, I went to church there, it’s like full circle.’ I had already thought about putting my son in the program when he was old enough, so everything just felt right, like it was meant to be.”

A capital campaign to raise money to fund the ARK Learning & Arts Academy is still underway. Mouser and Strausbaugh explained the redevelopment committee is working on securing grant funds as part of the campaign. Anyone is welcome to make a donation, including specific donations that will be used for furniture (sleeping cots) and technology (iPads, classroom TVs, computers, etc ...).

A virtual open house and an in-person open house are planned for April, following completion of the renovations. In addition, a ribbon-cutting ceremony is planned in April in celebration of ARK’s 30th anniversary.

For more information, to make a donation, or to register a child/children for classes, go to arklearningacademy.org, defiancestpauls.org, facebook.com/arklearningacademy or call 419-782-5551.