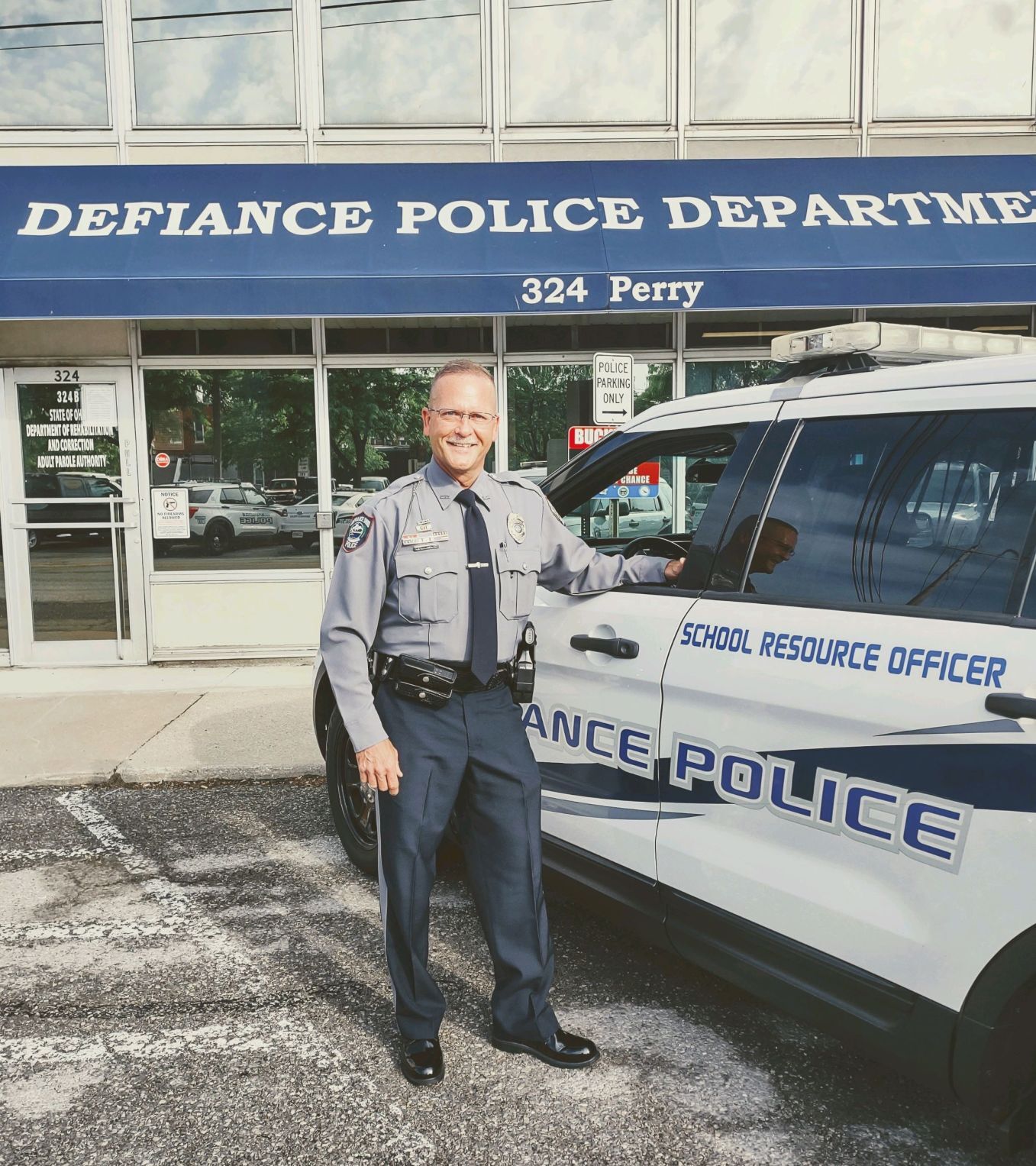 John Williamson poses with his police cruiser in front of the Defiance Police Department (DPD) on Tuesday. Williamson officially retired from the DPD Tuesday, after serving in various roles in the organization for the past 29 years. 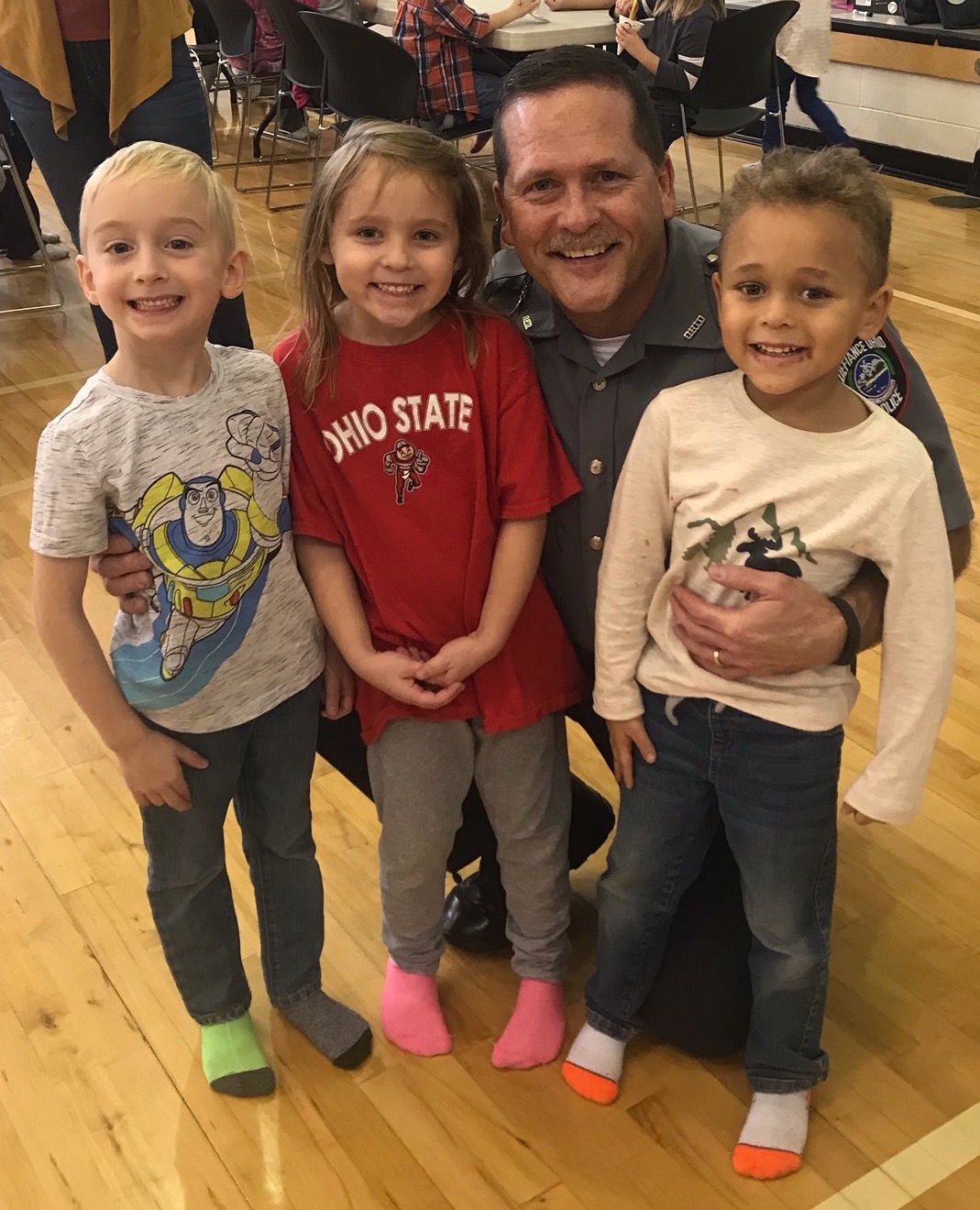 John Williamson (second from right), who served as school resource officer at Defiance City Schools the past 4 1/2 years, poses for a photo with a trio of elementary students during Field Day. Williamson retired from the Defiance Police Department Tuesday, after 29 years with the organization.

John Williamson poses with his police cruiser in front of the Defiance Police Department (DPD) on Tuesday. Williamson officially retired from the DPD Tuesday, after serving in various roles in the organization for the past 29 years.

John Williamson (second from right), who served as school resource officer at Defiance City Schools the past 4 1/2 years, poses for a photo with a trio of elementary students during Field Day. Williamson retired from the Defiance Police Department Tuesday, after 29 years with the organization.

“It was everything that I expected, but totally different than I expected.”

Those are the words of John Williamson, who retired Tuesday after serving 29 years in several different capacities with the Defiance Police Department.

Williamson, a 1986 graduate of Tinora High School, served in the U.S. Army from 1986-91, including a deployment in Operation Desert Shield/Operation Desert Storm. During his time in the military, Williamson served as a 12-Bravo combat engineer with explosives and detonations training.

Knowing he wanted to pursue a career in law enforcement, Williamson was attending the Ohio Peace Officer Training Academy (OPATA) in Toledo, before being hired March 15, 1992, by the Defiance Police Department (DPD).

“From the time I was young, I always wanted to be a police officer and be an Army guy,” said Williamson. “My family on both sides have a long history of people serving in the military, so joining the Army was my way of keeping that going. I was delayed entry, I knew my entire senior year that when I graduated I would be heading to Fort Leonard Wood (in the Missouri Ozarks).

“I got out of the Army in 1991 and had started the process of applying to and getting hired by some (police) agency, and the timing was perfect for me that the city (of Defiance) was in need of an officer,” continued Williamson. “I was in my third week of the academy when I was hired.”

During his time with the DPD, Williamson has worked as a patrol officer, a detective, and the last 4 1/2 years full-time as the school resource officer (SRO) at Defiance City Schools (DCS).

“I knew several officers on the department from when I was younger, Lt. Skip Stites was someone I looked up to, and as I got older, I got to know Bob Gutman through family and work, Jeff Mack from growing up together, and Lt. Art Miller, who was my first shift supervisor. He taught me a lot in those early days,” said Williamson. “Doug Harrow was another supervisor who taught me a lot.”

Following his first go-round as a patrol officer, Williamson made the move to the detective bureau, where he worked with John Finn and Larry Hall, whom Williamson credits with teaching him how to be a good detective.

“When you come off the road and go into plain clothes, some people think you already know how to do everything. Some of it is common sense, but there is a lot of training,” said Williamson. “During my time as a detective, I tended to deal with a lot of abuse cases, and while tough, there was satisfaction in getting the rightful outcome for those individuals.

“My first two years or so, we dealt with three homicides, there’s never anything good about those, so there was some baptism by fire,” added Williamson, who worked as a detective for 10 years. “By putting our noses to the grindstone, we were fortunate to have people be held accountable for what they did.”

Williamson returned to the road in 2010, where he also worked on a rotational basis as a SRO from 2014-17, before moving into the SRO position full-time on Jan. 1, 2017. In order to make that move, Williamson again had to undertake specific training.

“Doing it on a rotational basis, I found I really enjoyed the duty, I liked working with the people in the school and the kids, and I liked being there as a positive influence (for the kids),” said Williamson. “A change in the law mandated that all school resource officers have a 40-hour block of training to serve in that position. I was able to get that training in the summer of 2017, and after that I had to maintain educational hours to keep that status.”

As a SRO, Williamson explained he dealt with many of the same aspects of police work he did on the road, dealing with fights and theft, as well as assisting teachers and staff, giving presentations, safety measures, etc. He worked closely with administrators, teachers, guidance counselors and the athletic department, including being present at events during and after school.

In addition, Williamson built relationships with students as someone they could talk to, no matter the situation.

“I was someone the kids could talk to about something bad that happened the night before at home, if something wasn’t good in a relationship, or anything the kids had that bothered them and maybe had bottled up for a long time,” said Williamson. “Sometimes it was a talk to get something off their chest, or it was something that would lead to a (police) report to try and help them if they were in a bad situation.”

Knowing his time as SRO would not last helped Williamson make the decision to retire. He won’t be out of work long, however, as he has accepted a position with the Mercy Health Police Department. Following training later this month, he will begin his new position on the Defiance campus.

While he’s looking forward to a new chapter, he admitted the decision wasn’t easy.

“The last few days have been pretty difficult,” said an emotional Williamson. “The send off that the school gave me was awesome, not necessary but very much appreciated. Today (Tuesday) has been a roller coaster of emotions, too. There are so many people here who were hired in just after me, others here before me ... saying good-bye is bittersweet.

“This is what I know,” continued Williamson. “I feel very fortunate to have had a good career and I hope I made the department proud.”

Williamson and his wife, Jody, have two children, daughter, Kylee (Drew) Toth of Rossford, and son, Kody (girlfriend Lindsay West) of Bowling Green. The two just recently found out they will be grandparents.

“We are happy and excited to be grandparents,” concluded Williamson, who had a reception held in his honor Tuesday at the city service building.