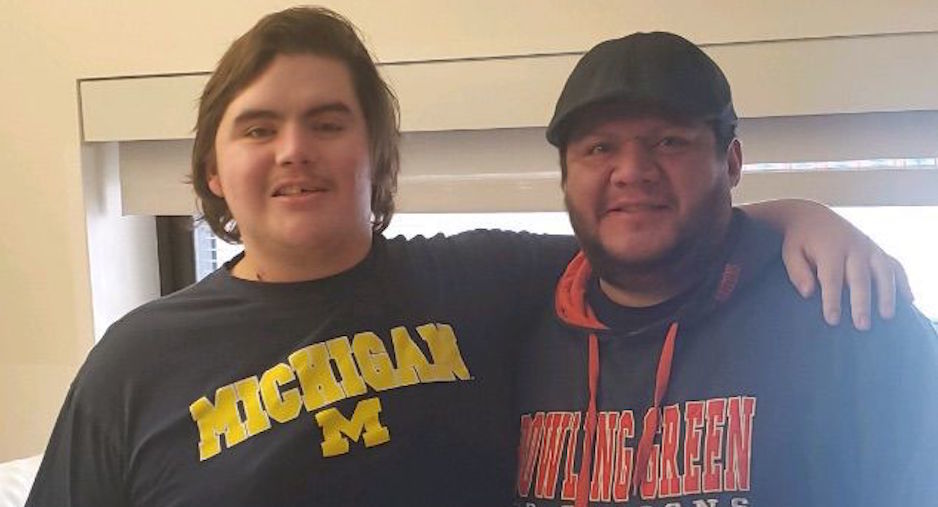 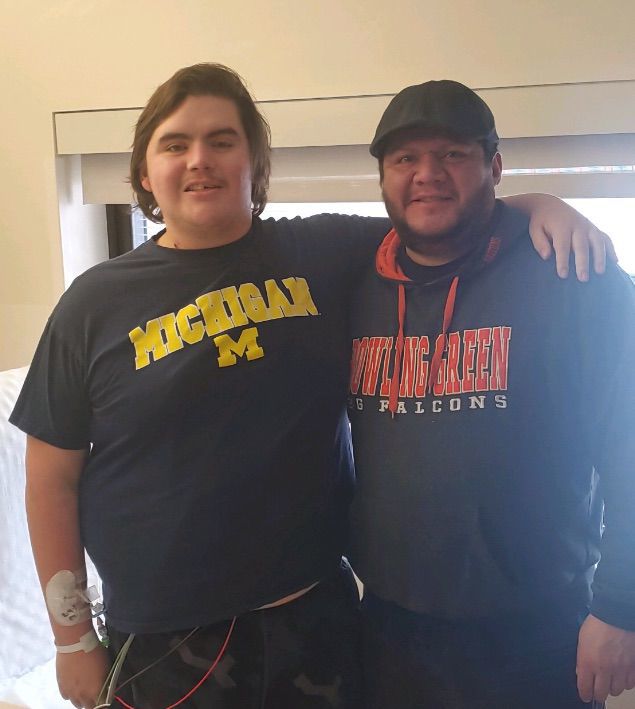 After a 3-year wait, Gabe Villanueva recently received a heart transplant. At left, Gabe (left) and his father, Israel Villanueva, share a hug in a hospital room. Above, Gabe relaxes after returning home this week after receiving his heart transplant. 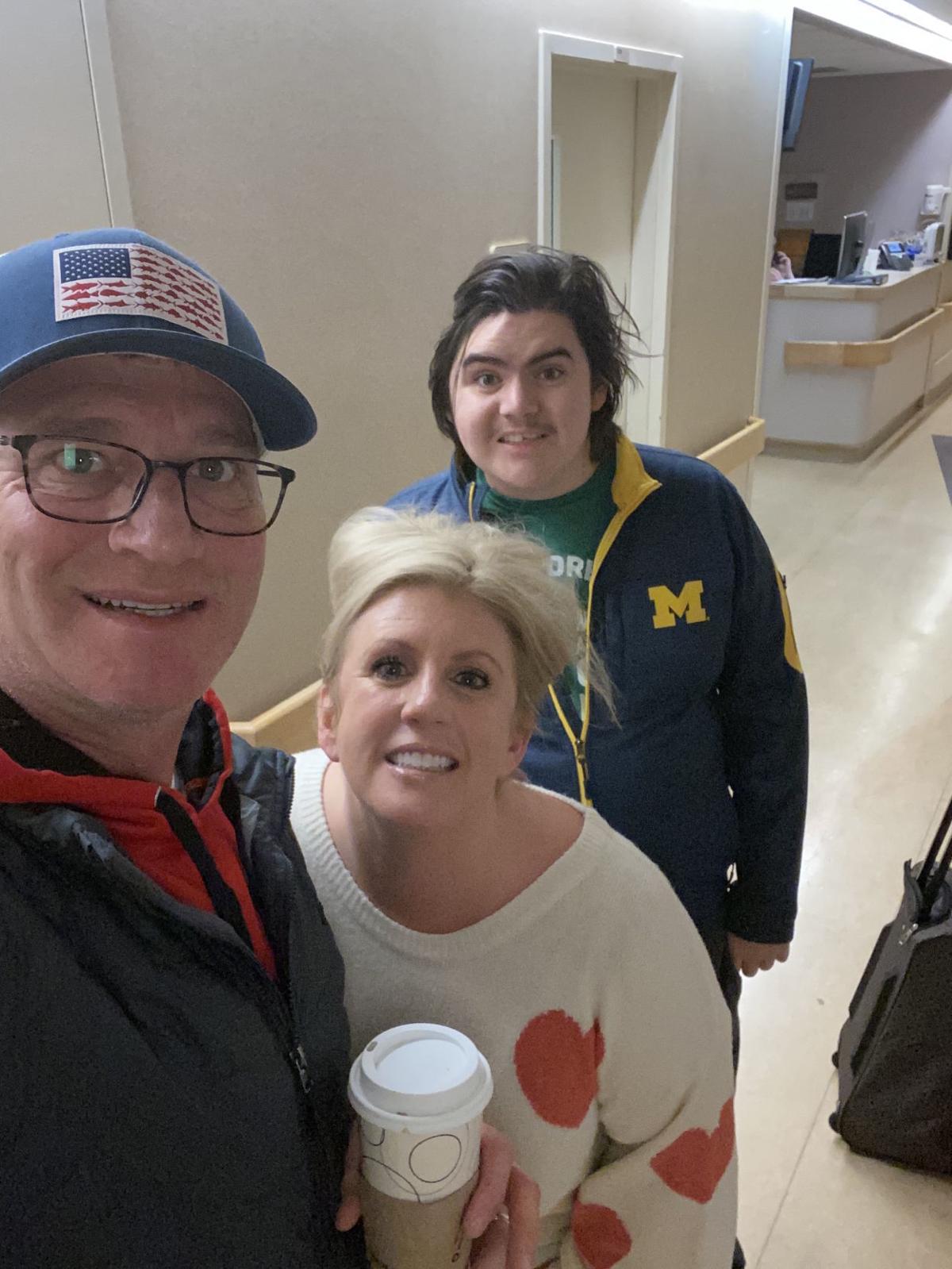 Gabe Villanueva (rear) gets ready to leave the hospital on Monday with his mother, Lindsay McMordie, and his stepfather Jason McMordie. 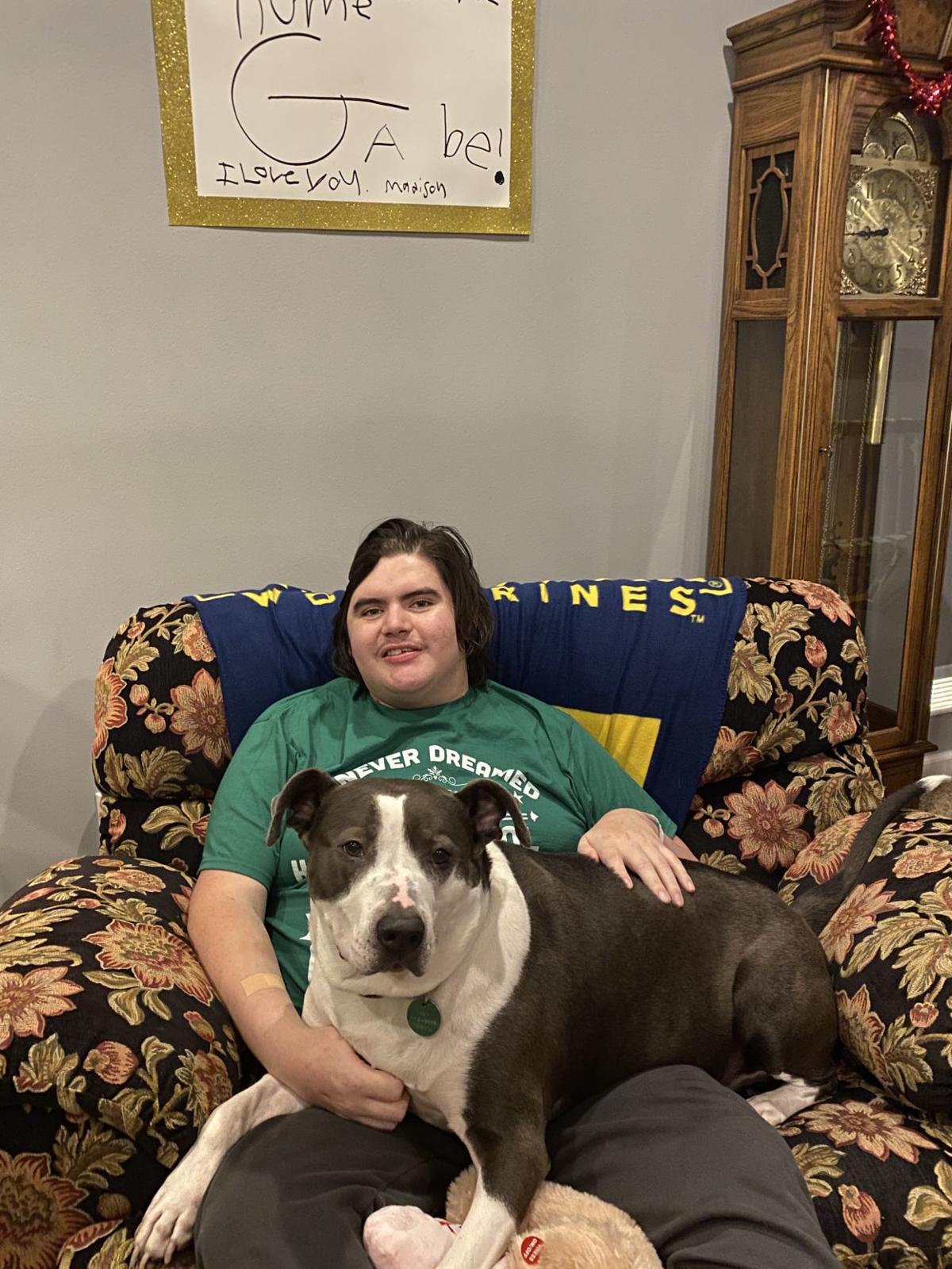 After a three-year journey to get a new heart, Gabe Villanueva returned home on Monday. Here, Villanueva sits back and relaxes in his first moments after returning home.

After a 3-year wait, Gabe Villanueva recently received a heart transplant. At left, Gabe (left) and his father, Israel Villanueva, share a hug in a hospital room. Above, Gabe relaxes after returning home this week after receiving his heart transplant.

Gabe Villanueva (rear) gets ready to leave the hospital on Monday with his mother, Lindsay McMordie, and his stepfather Jason McMordie.

After a three-year journey to get a new heart, Gabe Villanueva returned home on Monday. Here, Villanueva sits back and relaxes in his first moments after returning home.

For one Michigan man with ties to the Defiance area, February will always be the month remembered not for paper or candy hearts, but as a time when he was given a new lease on life, thanks to the selfless act of organ donation that granted him a new heart.

For Gabe, his journey began in March of 2017, when as a 17-year-old Adrian, Mich., high school student returning home from a friend’s house.

On his way home, Villanueva was involved in a car accident that saw his car flip over four times before coming to rest in a field. Villanueva was treated and released from the hospital following the accident, but what no one knew at the time was that the crash had caused irreparable damage to Villanueva’s artery.

The result of the damaged artery was a three-year journey that tested Villanueva’s strength, faith and family bonds.

“It was all just a very tedious process,” Villanueva said after returning to his home in Adrian, Mich., this week. “At first I thought about it (getting a new heart and what was ahead of me) a lot. But then I told myself that I wasn’t going to spend my life dwelling on just that one thing, or that one moment (the accident).

“So what we did was just decided to hang in there,” added Villanueva. “And we just all did what we had to do.”

It was a philosophy that brought Villanueva through dark times.

After his accident, Villanueva suffered through three heart attacks, a stroke, several resuscitations, comas, and major surgeries on his heart and brain.

He went about his daily life connected to machines and surrounded by health care professionals that constantly monitored his condition.

“Words really can’t describe the wait and that feeling of what all happened,” said Villanueva’s father. “It was really hard for all of us for a while.”

But through it all, he wasn’t alone.

Villanueva’s friends and family also volunteered to be trained in life-saving skills so that they could continue to take in a movie or go out and eat a pizza. In short, Villanueva and his circle of support were moving forward and not dwelling on the negatives.

“There was never a time that we didn’t know that God had this,” said Gabe’s mother, Lindsay. “We knew that whatever the plan was (for Gabe), it’s certainly big.”

In January, a little more of that plan was revealed when the family learned that a heart had been found and that Gabe was to receive the life-saving transplant.

“It was amazing,” said Isreal about the feeling when they heard the good news. “We were crying and just happy, it was a miracle.”

For now, Gabe doesn’t know the identity of the donor or the family.

Part of the donation process calls for those involved to wait a year to heal both emotionally and physically before seeking out the other parties involved. This time next year, however, Villanueva will be allowed to write a letter to his donor’s family. And if both sides agree, they can meet in person.

For Villanueva, after living life one day at a time, receiving the organ was a beacon shining bright, showing that there is still good in people.

After spending more than 12 hours in the surgery room five weeks ago, Villanueva finally had his new heart in place and a new lease on life thanks to donor he may never know. It’s a journey that is far from over, but it’s one that he and his family know made them stronger for taking.

“It’s pretty amazing, he definitely beat a lot of odds,” said his mother. “We are the blessed ones, the heart is one of the most difficult transplant items to receive because of all that is involved in the process.”

Now, Villanueva and his family are looking to bring awareness to organ donation and all that it can do.

“Our mission now is to really just get spread the awareness of (organ) donors and the impact it has on families,” said Lindsay. “There are too many misconceptions out there about organ donation. We’re just trying to educate people about making the decision on being a donor and we hope our story helps bring awareness to facts like each person who donates can save up to eight lives and without donation 22 people die each day needing a organs.”

For Gabe, he’s looking to use his experience and make the most of it not just for himself, but for others who are in need.

“I want to go to school and become a nurse,” said Villanueva about his future plans. “This whole process is really inspiring to me. I want to do that just so I can help others the way others have helped me. I have so much to offer having been on both sides of this.”

Photos on Page A1 courtesy of Lindsay McMordie and the Villanueva family.