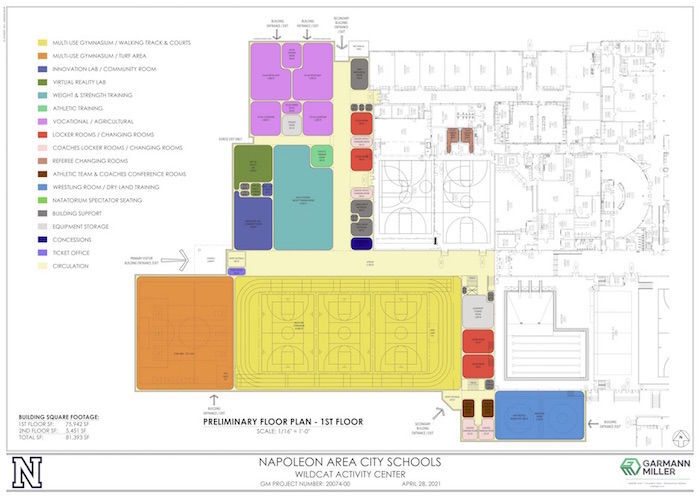 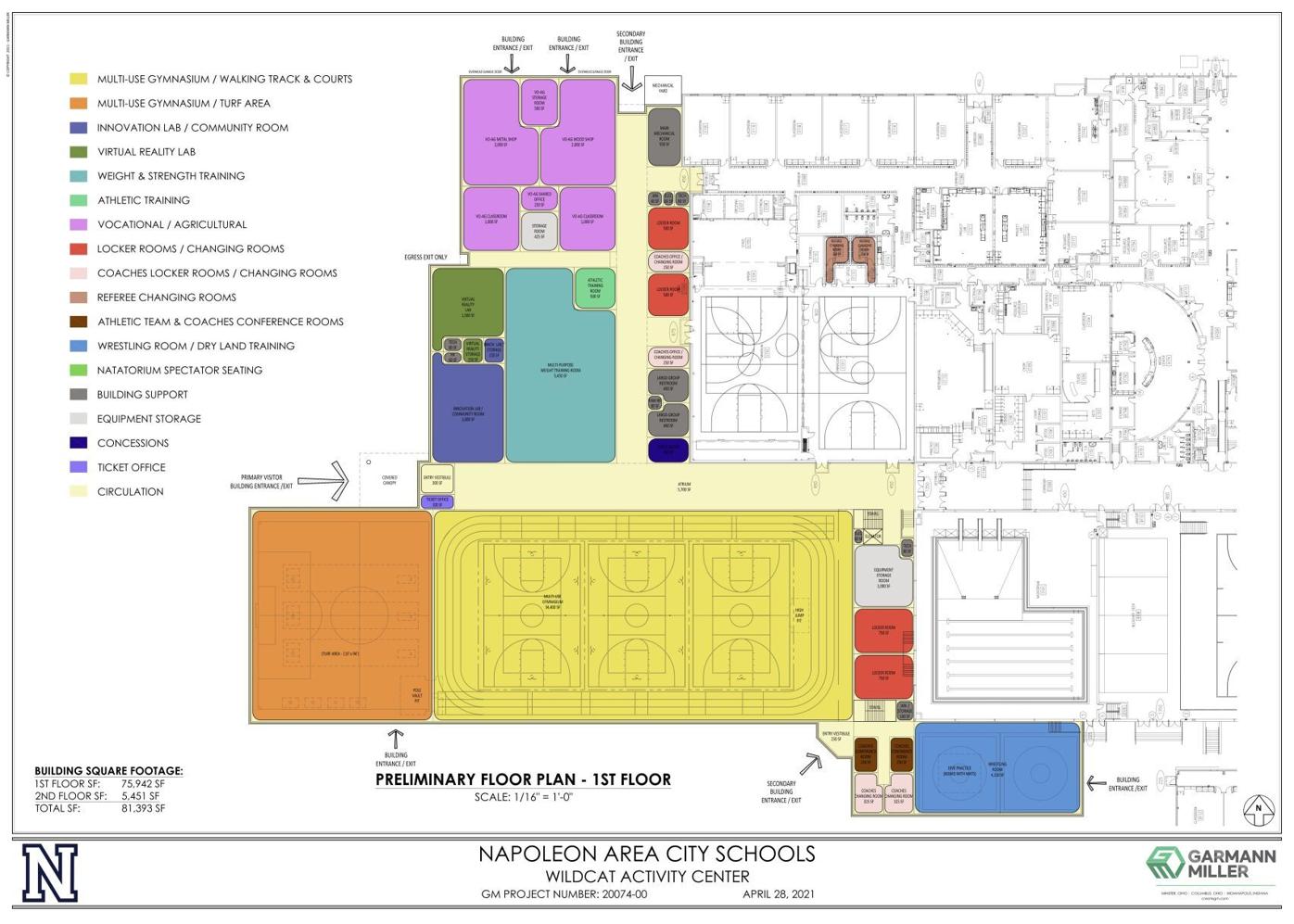 Shown is a proposed drawing from Garmann Miller Architects that features the first floor of a proposed new athletic/academic addition at Napoleon Junior/Senior High School. The items in color include the addition, while the gray items are part of the existing structure. 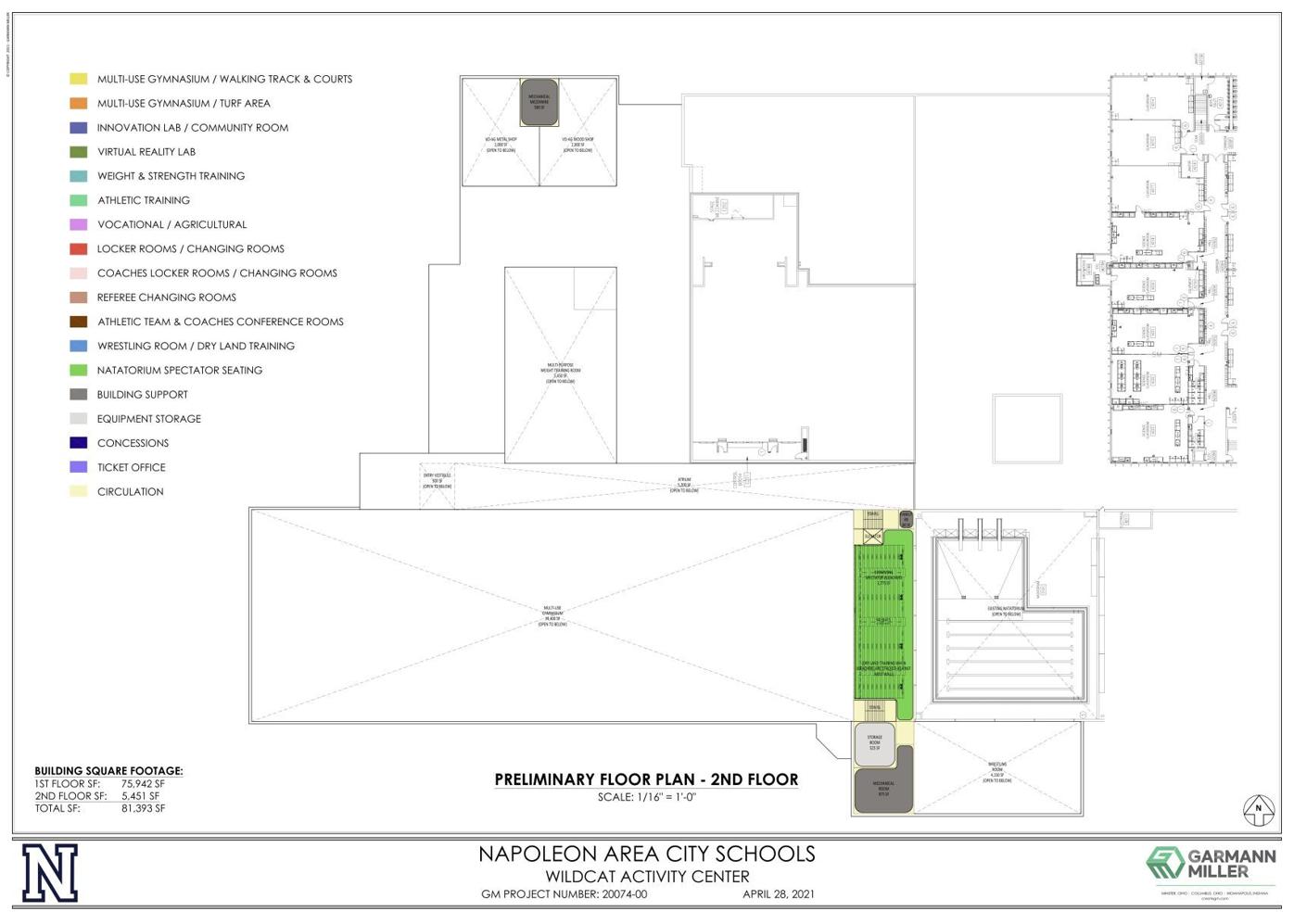 Shown is a proposed drawing from Garmann Miller Architects that feature the second floor of a proposed new athletic/academic addition at Napoleon Junior/Senior High School. The items in color include the addition, while the gray items are part of the existing structure.

Shown is a proposed drawing from Garmann Miller Architects that features the first floor of a proposed new athletic/academic addition at Napoleon Junior/Senior High School. The items in color include the addition, while the gray items are part of the existing structure.

Shown is a proposed drawing from Garmann Miller Architects that feature the second floor of a proposed new athletic/academic addition at Napoleon Junior/Senior High School. The items in color include the addition, while the gray items are part of the existing structure.

NAPOLEON — Representatives from Garmann Miller Architects revealed proposed plans for a new athletic/academic addition to Napoleon Junior/Senior High School via Zoom during the Napoleon Area Board of Education meeting Wednesday.

Matt Hibner, Garmann Miller board member and an architect, and Brian Wolf, a project manager for the firm, revealed proposed plans for a two-story, 81,000-square-foot addition that would house athletic/academic spaces.

The two explained plans were drawn to address specific needs of the district following visioning meetings in January with school/community members. In January, Hibner and Wolf met with individuals representing business/curriculum, athletic/boosters and community/family.

Ideas included extra space for athletic events/storage, family recreational spaces, as well as classroom space for vo-ag/industrial arts. At that time, superintendent Erik Belcher explained if a building were to come to fruition, it would be located at the back of the existing junior/senior high building.

“We met with the groups back in January, we got a lot of feedback, followed up by a meeting with the natatorium committee in which we got a lot of information from them as well,” said Hibner. “We then went to work on the design, and at the end of February/early March, we shared very preliminary drawings with Dr. Belcher, before going back to work the past six weeks to get to this point tonight with these preliminary drawings to share with you.”

Hibner shared his screen with the members of the board, which showed the addition on the west end of Napoleon Junior/Senior High School. Hibner pointed out a reconfiguration of the first-floor main entry, secondary entrances and a drive leading to vo-ag classrooms.

Inside the new space on the first floor at the new main entrance, Hibner pointed out a space which could be used as a ticketing office, as well as a long atrium that at the end, would lead to the natatorium and the Grand Canyon.

“We want to expand upon that and use that (atrium) as a gateway, a streetscape, that would allow people to connect to the various spaces,” said Hibner.

Hibner then pointed out a multi-use gymnasium at the south end of the addition that would include three full-size gyms for basketball/volleyball use, a three-lane indoor track, as well as spaces for a pole vault pit and long jump pit.

Connected to that space between the new gyms and the natatorium would be locker rooms, storage spaces, coaches offices and changing rooms. At the west end of the new space would be a turf area for baseball/softball cages, golf nets as well as use for indoor football walk-throughs.

“This is a very large space, that would include secondary entrances and exits that would allow teams to get to the various athletic fields faster,” said Hibner.

The architect pointed out just to the north of the new entrance would be an innovation lab/community room in the front, storage in the middle and a virtual reality lab behind the storage areas. To the east of those spaces would be a new multi-purpose weight room that includes a training room.

“One of the items we heard from all the groups was the need for storage, and this addition would add quite a bit of storage throughout,” said Hibner.

Moving to the second floor, Hibner shared stairs and elevators would lead to a new seating area about the natatorium that would seat approximately 543 people. A storage room and pair of mechanical rooms would complete work on the second floor.

“It’s an amazing project, what you’re looking at, and we’re extremely excited to be a part of the team,” said Hibner. “It’s a very ambitious plan, we’re looking at approximately 81,000 square feet of new building space, but it would be a state of the art facility, to say the least.”

Said Wolf: “I echo what Matt said, there was a lot of passion going into this, and if built, it would be second-to-none. At this point, we could move forward with 3-D renderings, which would bring much more of the flash to the plan.”

Hibner and Wolf explained that after getting feedback following the presentation, Garmann Miller will get to work to develop its plans with its engineering team, which would lead to a probable cost for the addition.

“Just with where things are at from a market standpoint, we’re seeing costs in that $250-$300 per square foot range, so that’s something to keep in mind,” said Hibner. “It’s too early to pinpoint that, we’re at a preliminary level, but we’re using historical averages along with market conditions and trends to give you a ballpark figure of what you could expect of this magnitude and scale.”

Belcher explained the addition would serve many purposes.

“Each one of these areas will serve multiple facets, and we also have to remember that some of the spaces that we currently have are going to be freed up for even more things,” said Belcher.

Following the presentation, there was no further discussion.