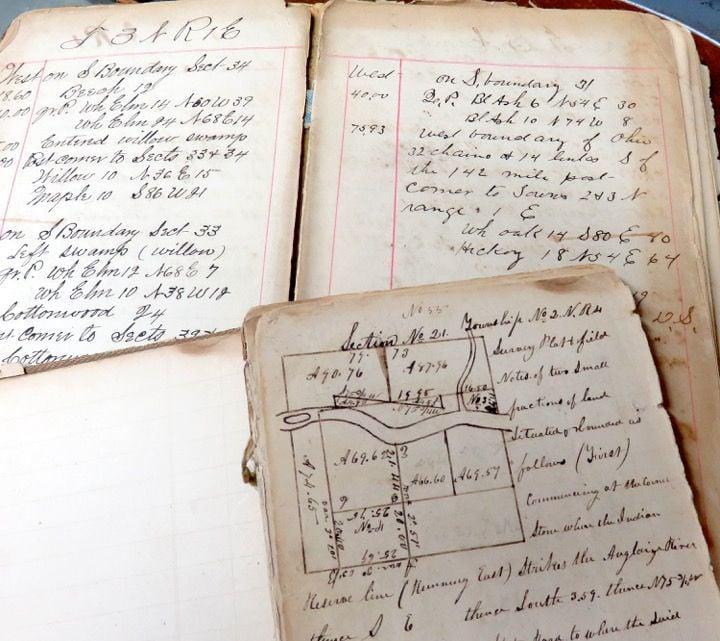 These original journals were carried in the breast pockets of surveyors more than 200 years ago in the lands of the Maumee River valley. The Paulding County engineer’s department now has the documents in its vault. 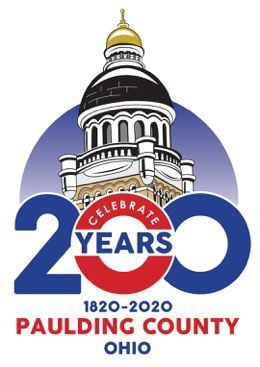 These original journals were carried in the breast pockets of surveyors more than 200 years ago in the lands of the Maumee River valley. The Paulding County engineer’s department now has the documents in its vault.

Editor’s note: This article is the first in a series to be submitted by Paulding County Bicentennial Committee members Kim Sutton, Jane Nice and Melinda Krick, all local history buffs and writers. The series is just one of the projects planned through the Paulding County commissioners office to help celebrate this milestone over the next 12 months. New research by the writers will add some additional detail and depth for readers.

PAULDING — As we prepare for a yearlong celebration of Paulding County’s 200th anniversary, we can’t help but try to imagine what this land we call home was like 200 years ago. This area was the last frontier to be settled in Ohio. The settlement of the swamp has been well documented by many authors over the years. We think we’ve heard it all, but did you know …

The Paulding County engineer’s map department has something very special in its vault. It has the original surveyors’ journals. In 1819, Capt. James Riley was appointed surveyor of the land north of the 1795 Greenville Treaty Line, in particular the lands in the Maumee River Valley. These very journals were carried in the breast pockets of the surveyors over 200 years ago. They were taken out and the surveys were penned in as the surveyors slogged along and trudged this miserable swamp, infested with mosquitoes, in order to lay out the township lines for what would be known as Paulding County.

The Great Black Swamp covered more 1,500 square miles and was created more than 10,000 years ago after the glaciers receded and formed the Great Lakes. Paulding County, in its entirety, lay beneath the Great Black Swamp which is why today we are said to be the flattest county in the state of Ohio. In 1820, this densely forested, mucky swamp made the settlement of this land unusually difficult and few were eager to take the challenge. Historic writings tell us the area was filled with all kinds of wildlife, some we still see today and some we can’t imagine such as black bear, timber wolf, wild boar and bobcat.

By the Act of Feb. 12, 1820, and to encourage the further settlement of the state, the Ohio General Assembly provided “That all that part of the lands lately ceded by the Indians to the United States, which lies within this state, shall be, and the same is hereby erected into fourteen separate and distinct counties, to wit: Allen, Crawford, Hancock, Hardin, Henry, Mercer, Paulding, Putnam, Sandusky, Seneca, Union, Van Wert, Williams and Wood.” The boundaries of these counties were established on April 20, 1820, though several years elapsed before all were fully organized.

When James Riley and his deputy surveyors arrived, the only inhabitants were the Native American tribes of the area, who were forced to live here as a result of the Treaty of Greenville some 24 years earlier. In Paulding County, it was mainly the Ottawa and some Shawnee. The Shawnee had been run out of their lands and were taken in by the Ottawa.

From the surveyors’ observations we can tell that our county had very few, if any, conifers and was mainly a deciduous swamp forest of giant oaks, hickory, walnut, elm, ash, beech, maple, birch, buckeye, cottonwood, sycamore and many others that created a dense canopy, keeping the sun from reaching the forest floor.

As the leaves fell season after season into the standing waters, they rotted and formed a thick, oozing muck.

The surveys were done from tree to tree. For example, they would start at the north corner of the township line between sections 1 & 2 and set a post, thence run south 47 degrees, west 32 minutes for 120 chains to a white elm 18 inches in diameter; thence N 30 degrees, W 53 minutes, 75 links to a hickory 10 inches in diameter and so on.

The surveyors made note of the many Indian trails or roads they encountered while doing their work. It seems every township had an Indian trail/road. Sometimes they wrote trail and other times it was road. The dictionary defines trail: “a track made by passage through wilderness” and road: “a wide way leading from one place to another.”

Other notes included a description of their surroundings, such as “Land swampy,” “Land not suitable for cultivation,” “Land is level and swampy with much old timber down.” Occasionally the surveyor would walk out of the water onto somewhat higher ground and this would be noted as well, “entered into brush prairie” and “Land rolling and rich.” They documented the timber, the undergrowth and other vegetation types. They wrote of crossing the streams and rivers and noted their width. They often drew a sketch map to be used later by the General Land Office to draw larger maps.

One particular note is rather humorous: “Finding the marks cut out of the corner trees. I re-make them. All the marks on the town lines have been cut out lately; and the marks we make one day are cut out the next.” Why do I chuckle? Well, the only people who could’ve been watching the surveyors make their marks on the trees and then go in and cut them out were the Indians.

I envision young braves, resentful for being pushed off their lands into this northwest corner of Ohio and now the surveyors were here once again laying lines which the Indians had to sense would mean being forced from their homes again. I imagine this was their way of showing frustration and disdain for what the white man had come to do.

To me, the most fascinating sentence in all of the surveyors’ notes is found in the survey of the exterior boundary lines of Oquanoxa’s Indian Reservation near Charloe. It starts out — “Began at the place pointed out by Oquanoxa, the Chief, as the center of the Town…” and goes on to give the metes and bounds description of the reserve. Local written history, which has been repeated time and again, told us that the Indians had been forced off their lands and went west in 1820.

However, by this entry, we know that the Ottawa Indians were indeed still here. Oquanoxa himself pointed to the center of his town for the surveyors. So, when did the Indians actually leave Paulding County? That is another subject for our historical articles to be written. Stay tuned.

More information on the bicentennial can be found on Facebook at www.facebook.com/PauldingCounty200.