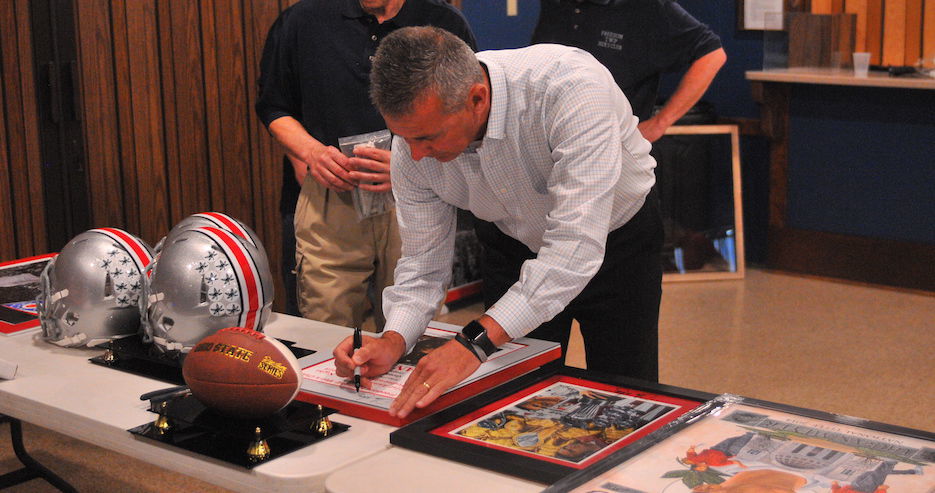 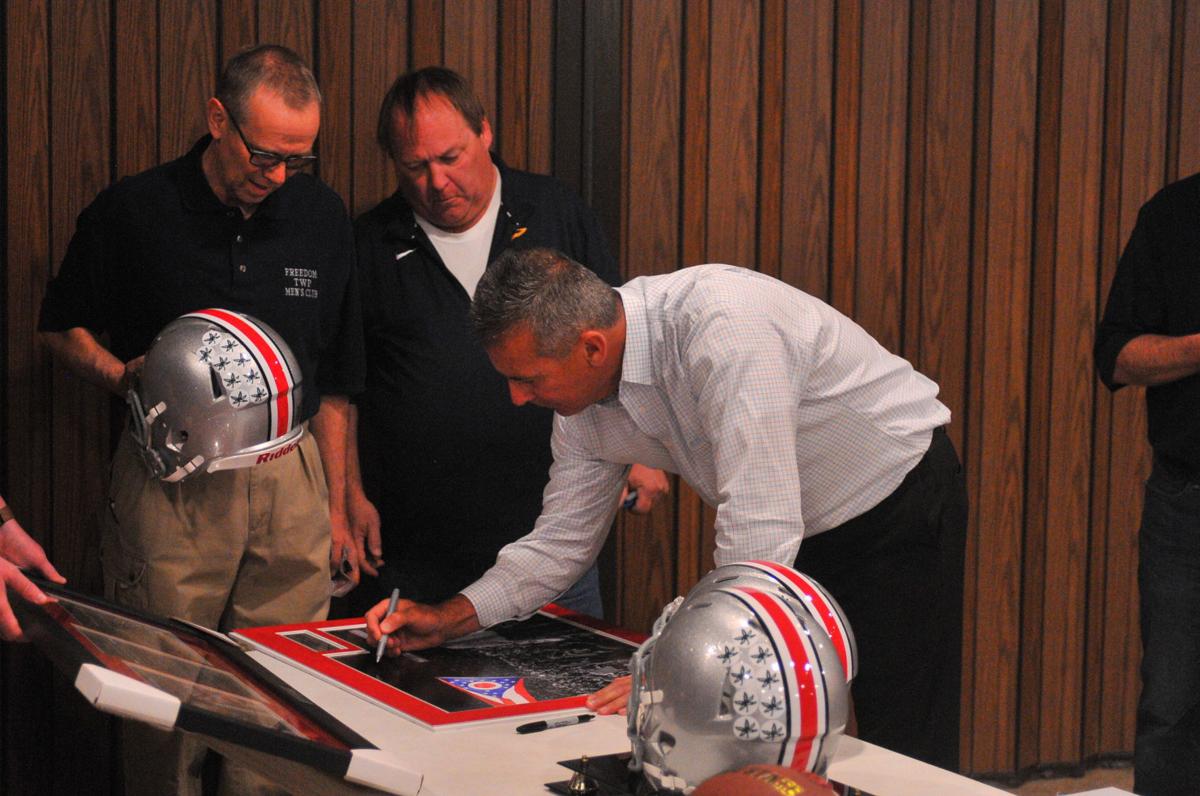 RIDGEVILLE CORNERS — Perhaps one of the most anticipated guests to grace the dais at the annual Freedom Township Men’s Club Sports Night spoke before a capacity crowd at the Ridgeville American Legion on Wednesday as former Ohio State head football coach Urban Meyer took the stage for the 31st annual event.

Meyer, speaking as part of the annual festivities, which included a raffle and silent auction of sports memorabilia, retired as Ohio State’s football coach after seven seasons following a Rose Bowl win over Washington in January.

He currently serves as an assistant athletic director under Ohio State AD Gene Smith, along with community outreach duties as a representative of the university. Meyer will spend time in front of the camera as well, serving as part of FOX’s college football broadcasts this fall, his second stint on TV after working at ESPN in 2011.

“I’d have to say this year’s rivalry game when I took a peek at the scoreboard and saw 62 points,” said Meyer of the most memorable victory of a career that features a gaudy .854 career winning percentage (187-32), three national championships, seven conference championships and a career mark that does not feature a losing record in 17 years as a head coach.

Born in Toledo, raised in Ashtabula and a University of Cincinnati graduate, Meyer knows full well the passion for football in Ohio, from the prep level to the obvious fandom for the Buckeyes and at the professional level.

“It’s very important. I remember my town shutting down on Friday nights because football was that important,” said Meyer, who was a graduate assistant at Ohio State in 1986-87 under Earle Bruce, while also tallying a 17-6 record in two seasons as head coach at Bowling Green from 2001-02, turning around a 2-9 program the year before to an 8-3 squad in his first season. “I played high school here, I played college here. The reason I came here, I took a look on the map where it was and I have a great admiration for this part of the state because I was at Bowling Green for those two years.”

Meyer announced his retirement in December due to health issues stemming from a benign brain cyst.

However, this was the first time the entire event was sold out pre-sale as a capacity crowd filled the American Legion building sporting scarlet Buckeye gear.

Following a press availability before the event started, a dinner and auction of sports memorabilia, Meyer spoke to the crowd about achieving greatness.

Earlier, Meyer had positive words for two different individuals from the area.

First was Napoleon resident and dentist Dr. George Cochran, who received a heart transplant at the Richard M. Ross Heart Hospital, part of the Ohio State Wexner Medical Center in Columbus. Meyer met with Cochran and his family on Tuesday and was taken aback by Cochran’s story.

“Unbelievable. I get a lot of requests and my secretary came in and said ‘you’ll want to read this one,’ ” said Meyer of the meeting. “He’s a dentist, an undergrad from Ohio State, grad school at Ohio State, school of dentistry at Ohio State.

“I’m sitting there talking to his wife and they have 12 children, 10 of which were adopted from seven different countries because they wanted to give these kids a good life and they’re thanking me for being there. I felt awkward, but it’s an incredible story.”

The other area connection is former Antwerp High School quarterback Quinn Tempel. Tempel, 28, has been a part of the Ohio State football program for nine years, since serving as a student manager in his undergrad years and working with former OSU offensive coordinator and current Texas football coach Tom Herman in 2014 as a graduate assistant.

Tempel has been part of three Big Ten championship teams, the 2014 national championship team and multiple bowl games in his tenure. According to his profile on the Ohio State staff website, Tempel “works closely with head coach Ryan Day and associate athletic director for operations Brian Voltolini with responsibilities that cover all aspects of football operations.

“He’s great. He’s been with us forever,” said Meyer of Tempel’s contributions to the program. “He was my right-hand man and he’s Ryan Day’s right-hand man. He’s going to be great and some day he’s probably going to be his own DFO. He’s earned the right. He’s that good.”

Meyer, 54, did not completely rule out a return to the coaching ranks in his future, but expressed confidence in new coach Day, who served as OSU head coach for the first three games of the 2018 season with Meyer suspended following the handling of domestic abuse allegations against former receivers coach Zach Smith.

“I knew last year he’s elite,” noted Meyer. “I’ve known Ryan for quite a while and to see him in that role and continue to grow as a coach. The infrastructure is so strong at Ohio State, our strength coach, our recruiting, player development ... I’m very biased but it’s the best in America and I just think when you have the infrastructure set and someone who’s not going to disrupt all that and make it stronger, he’s the perfect guy.”

In terms of advice for the new Buckeye skipper, Meyer injected some humor.

Joked Meyer: “My advice is beat the team up north, win every other game you play, graduate every player, make sure no one gets in trouble and make sure everyone’s a first-round draft pick.”