Jarod and Cristina Kammeyer are shown at their home in September 2021 after Jarod spent eight months at hospitals and rehabilitation centers due to COVID-19. 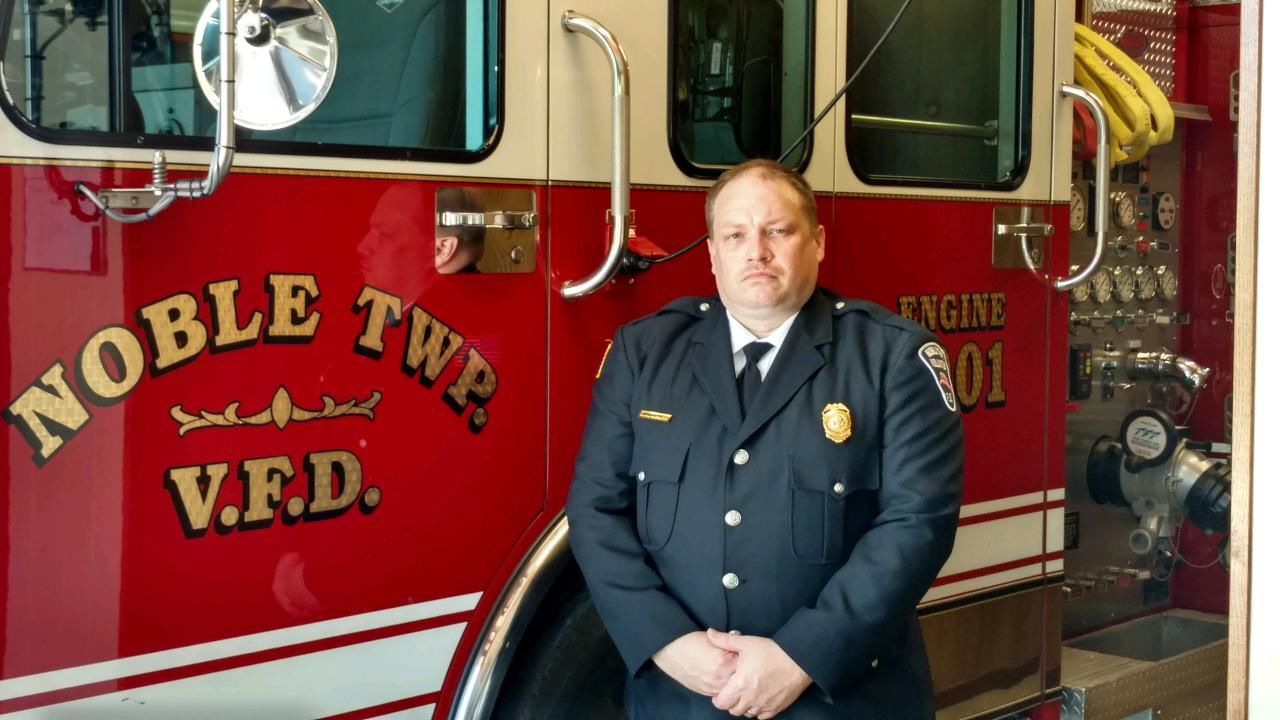 The 28-year veteran of the Noble Township Volunteer Fire Department, Jarod Kammeyer, just returned home on Aug. 31 after eight months in treatment and rehab for COVID-19.

Jarod and Cristina Kammeyer are shown at their home in September 2021 after Jarod spent eight months at hospitals and rehabilitation centers due to COVID-19.

The 28-year veteran of the Noble Township Volunteer Fire Department, Jarod Kammeyer, just returned home on Aug. 31 after eight months in treatment and rehab for COVID-19.

To see him today, Jarod Kammeyer does not resemble the man he was a year ago.

He definitely does not look like a 28-year veteran of the Noble Fire Department, or the man who had been the primary source of income in his home.

However, all of that changed due to COVID-19.

On Nov. 13, 2020, Kammeyer had a Zoom appointment with his primary care doctor about flu-like symptoms that would not go away. It was not until Nov. 16, however, that he had a positive test for COVID-19.

He had been ill for almost a week when a local ER diagnosed him with COVID, indicating that there was no reason for him to be alive; he was living on about 30% oxygen.

Kammeyer was sent from the emergency room to a Toledo hospital by air ambulance for intensive care treatment.

During the ER visit, his wife, Cristina, was also tested and was found positive with a mild case. She was told at the time of his air-lift to Toledo, “The next 48 hours are critical for him.”

Little did she know those hours would turn into months.

When he arrived at the hospital in Toledo, a new ICU was set aside for COVID cases and he was the first to occupy the unit.

At that time, he was on a breathing tube and a feeding tube, many intravenous needles and around the clock care in the intensive care unit.

No one was allowed to visit Kammeyer while he was in the ICU, but from time to time, nurses contacted Cristina so that she was able to visit her husband by phone.

During their time apart, both Jarod and Cristina shared that a phone chat didn’t make the fear and grief go away.

When she returned home, Cristina, too, had a new reality. The Defiance Health Department called daily for updates on her status.

For her, staying in isolation for two weeks was enough to run the course of her mild case. Nurses at the health department also informed Cristina to let them know when Jarod returned home so that they could document their cases.

Time wore on, her isolation came and went, while in Toledo things were changing. On Jan. 8, Kammeyer was transferred to St. Rita’s in Lima for continued treatment and rehabilitation.

During that time, Cristina began to think that her husband would never leave the hospital, but she said, “I never gave up hope.”

“I prayed and prayed every day. My faith is what kept me going,” said Cristina. Agreeing, Jarod said, “We couldn’t have made this without the help and prayers from so many people.”

Cristina wanted Jarod to go to Cleveland Clinic, so while he was at St. Rita’s she contacted them to see about availability.

“I wanted him to have the best care possible,” said Cristina.

Finally, on Jan. 29, the news came — the wait was over, Kammeyer was moved to the Cleveland Clinic where he was treated until April 1.

With the move to Cleveland, he was able to eat without a feeding tube for the first time.

Over the next few months, the full scope of Jarod’s problems came into focus. During his illness he had pneumonia, septic shock, MRSA, a sacral pressure wound, liver damage, COVID fog, he lost 100 pounds, and what was most scary — he died three times and was rescitated.

Many medications were given to him over the months of hospitalization, one to which he had an allergic reaction and was swollen from head to toe.

Every day, Cristina was with Jarod. Though the doctors thought that he would never walk, and possibly never be able to do much for himself again, Cristina said, “You don’t know my husband.”

“Every day I visited, I was hard on him. If he was eating and dropped the spoon, I told him to pick it up and start again,” said Cristina. “I wasn’t going to give up on him.”

It was at Cleveland Clinic that Jarod finally started to turn the corner toward recovery.

Gradually, he relearned the things that many take for granted and in July, after 233 days hospitalized, he took his first steps.

Even today, almost three months after his first steps, he still uses a walker for assistance.

After 288 days, Kammeyer returned home, but to a life of many changes.

The day he returned home, Cristina remembered that the health department had asked for her to call.

“When I called, I said, ‘Jarod finally returned home, after 288 days in hospitals and rehab facilities’. There was silence on the phone,” said Cristina. “The nurse could not believe that he had been gone that long and lived.”

Cristina added, “The Defiance Health Department told us that Jarod is the longest hospitalized case of COVID-19 from Defiance County.”

Today, because of Jarod’s fragile health, he and Cristina stay in quarantine at their home, only going out for doctor visits.

Frequent visits from caregivers for wound care for his back, appointments with a dietician, physical therapists who visit weekly, and skilled nurses two or three times a week are the sum of visitors he receives.

“When I go out to the store, I am gone for as short a time as possible,” said Cristina. “Ordering online and picking up the order has saved our lives.”

Returning home, she showers and “decontaminates” in order to make sure the house stays as clean as possible.

Through all the challenges, the couple still has hope.

“My parents call him the ‘Miracle Man’,” said Cristina. “What really keeps me going are hope, faith and knowing that others would give anything to be in my shoes.”

Jarod says he wants one thing out of this, “I want people to do the right thing — mask up or wear a shield, inform others if you’re positive, distance and isolate when necessary and possible.”

The Kammeyer’s have set up a GoFundMe page and are thankful to Defiance area and surrounding communities for their help and prayers.

Jarod and Cristina continue to have hope and are thankful to family, friends and their firefighter family at Noble Township, in addition to the surrounding fire departments who have reached out the family.

“We still need continuing prayer and support,” said Cristina, with Jarod adding, “Each day is a new challenge to find the norm.”