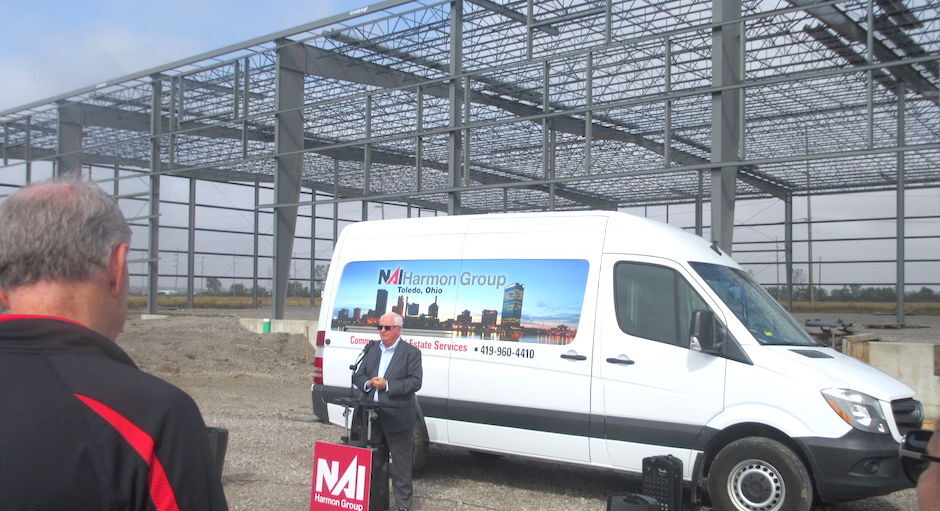 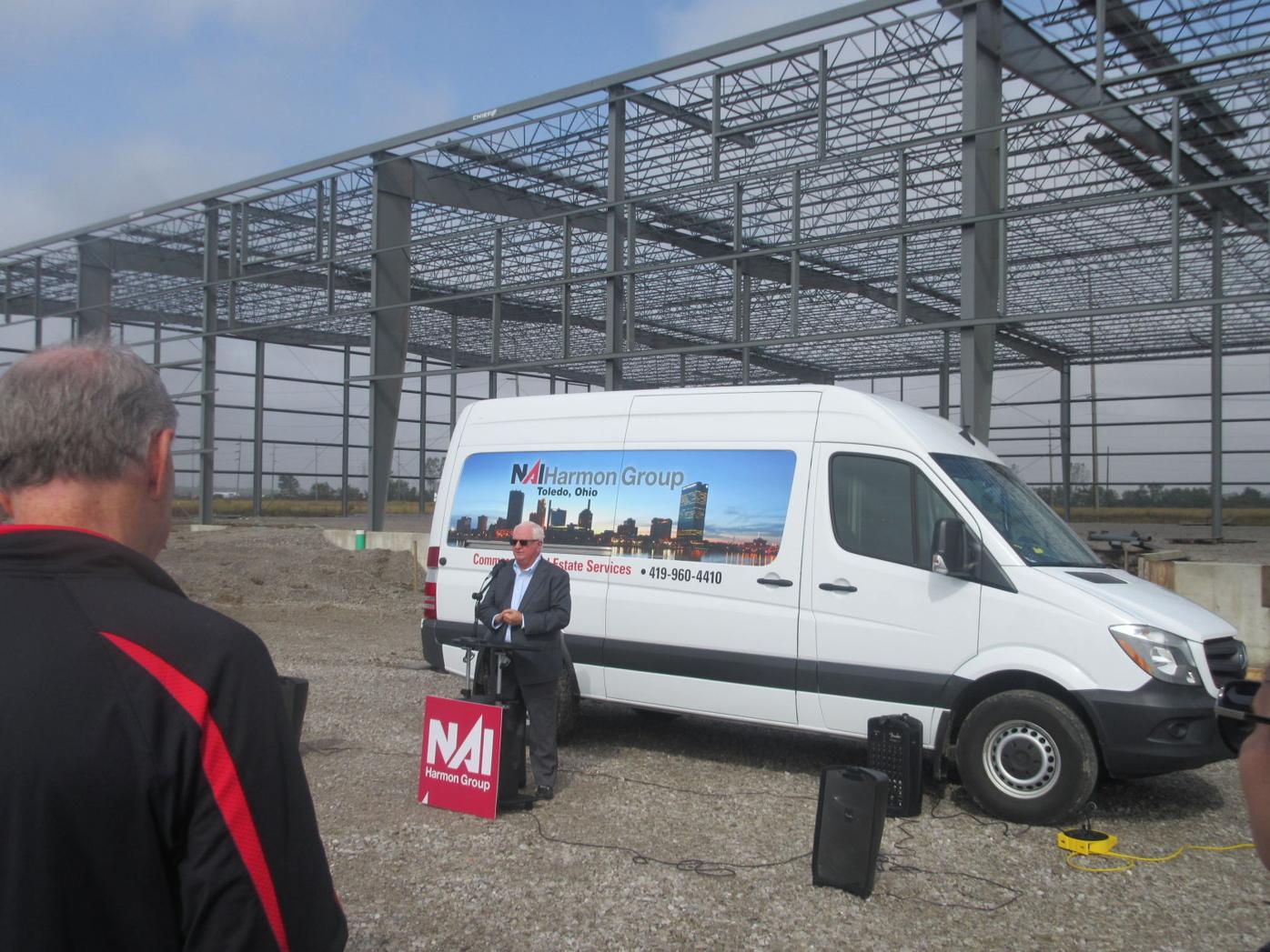 The leadership that made possible a burgeoning business park on Defiance’s northeast side celebrated success during an event there Tuesday afternoon.

Leaders and others gathered at Harmon Business Park — located due west of Domersville Road and just north of the Maumee River — to commemorate the park’s first tenant, California-based A Packaging Group (APG).

A manufacturer of packaging for the cosmetics industry, particularly dispensing pumps, APG plans to open in the first quarter of 2022. NAI Harmon Group noted earlier this week that APG wants to hire 135 workers and manufacture pumps on 15 automated lines.

But before that happens, the 80,000 square-foot speculation building underway there must still be completed.

Its bare steel beams and roof trusses served as a backdrop for several speakers who took the podium during Tuesday’s brief presentation.

Among them was Ed Harmon, CEO of NAI Harmon Group. A developer in many states and based in the Toledo area, Harmon was encouraged to give Defiance a look about five years by Mayor Mike McCann.

“We look for companies that can enhance the community and be part of the community,” said Harmon. “And with the help from the mayor on down, Defiance you are a hero to make this happen. Again I would like to just say thanks for the support, but more importantly to be able to create the type of community that we all want to be in. With the mayor’s help and city council and the other officials from the city, you’re making this happen. And I will commit to you, this is just the beginning.”

The comment refers to the possibility of subsequent building projects in the park that will provide structures for prospective companies to move into and finish to suit their needs.

McCann recalled his first meeting with Harmon in January 2015, followed by meetings and phone calls to get to this point.

He also thanked a number of local officials, including former Defiance County Community Improvement Corporation (CIC) Executive Director Jerry Hayes who had noted the need for buildings to attract new companies to town.

But McCann saved the most praise for City Finance Director John Lehner who worked on the fiscal aspects of the deal before city council approved a funding mechanism through ProMedica to acquire property for the business park.

The land was provided to NAI Harmon through the CIC in exchange for the company’s investment in the park’s infrastructure.

“Things like this do not happen without John’s blessing,” said McCann. “They just don’t. John’s got a cool head and he’s a smart guy, and he understands money as well as anyone I know. If it weren’t for John this wouldn’t have happened.”

“I’d like to start out by thanking first of all, the leadership in the City of Defiance,” said Allen. “Without a vision ... things like this just doesn’t happen. APG was looking for a partner. We’ve looked at several sites, several different states. I met Ed and the team just a few short months ago. It was a process to get to where we’re at today. But the team made it very easy for us to make the decision to come to Defiance, Ohio.”

Allen, who thanked state officials and others for their help, said opportunities existed to locate in several major Ohio communities. JobsOhio provided Harmon with funds and a loan for the building construction.

“We had an opportunity where we could have went to several different major communities in Ohio and other states, but one thing that attracted us ... the community itself and the partnership between the Harmon and JobsOhio is second to none, and I’d really to thank you all for that.”

He added that APG wants to bring its “principles and values” to the workforce by developing employees and offering flexible schedules.

So, It’s just a great opportunity for the people of Defiance as well,” said Allen. “... APG truly believes in sustainability and being social and responsible, not only to the community giving back to the community, but also the environment itself. We have a lot of great programs coming on board where we throw zero, absolutely nothing, into the landfill. ... And we really look forward to working with all of you and putting our stake in the ground in Defiance, Ohio.”

During his remarks, McCann told Allen: “I’m really looking forward to working with you. And we’re here to help you succeed because we know that when you succeed Defiance succeeds. We know when you grow we grow. And we want you to grow and we want to grow with you.”