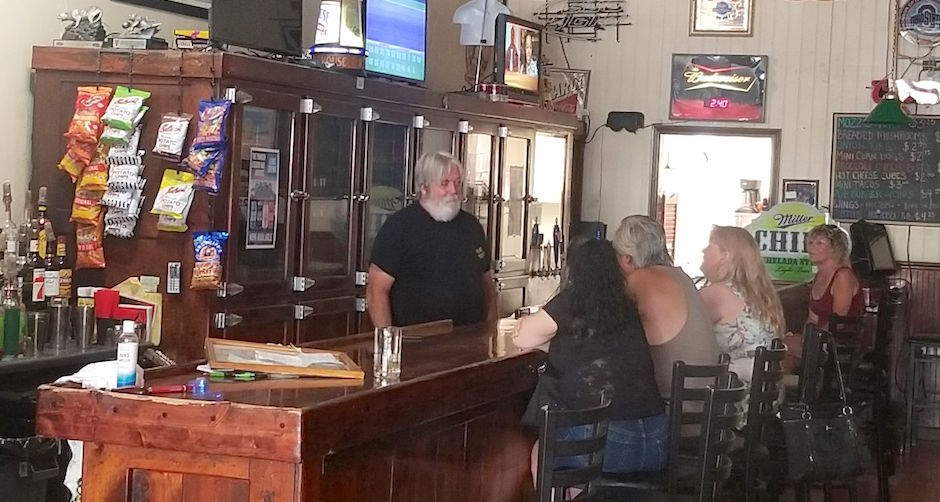 A local bar owner is saying “good-bye” to the community after 36 years of business.

Steven Pickens, aka Spanky, has sold the bar that is a Defiance landmark and the last building standing on the west side of the 100 block of Clinton Street.

The other buildings in that block have been torn down recently (see related story). Pickens will hand over the keys to local resident Matt Winzeler next week.

The Columbus native moved here in 1981 to attend Defiance College, and after graduating in 1985, he began working at the establishment.

“I needed a job and Randy Boyd, the owner of Dewey’s hired me to work for him. In a short time, I was running the business for him,” Spanky said.

He ran the business until Boyd sold it to him in 1998. “We changed a few things, changed the name to ‘Spanky’s,’ and moved the bar from the front to where it is now.”

Spanky added that the downstairs used to be for playing pool, “We had pool tables downstairs. Upstairs we always had the bar.”

Through the years, the bar to some has been known for a few things: the home of the biggest taco in Defiance, sold on Sunday’s; a not so nice reputation that, according to Spanky, “is because I served anybody, even people that some looked at as trouble.”

Until recently, Spanky’s was known as a busy place almost every night of the week.

“We used to have live music here on the weekends. DJs and karaoke when the bands weren’t here. It was hard to get through here without bumping into someone. Wednesday through Sunday nights we were busy.”

Local resident, Courtney McMillen commented that the bar has not just been known as a venue for entertainment. “Spanky has also had dinners here from time to time.”

Asked about the dinners, Spanky replied, “We used to have Thanksgiving and Christmas dinners here. Everyone was invited. You could come in and enjoy it with others, or take a plate to go.”

From time to time, local residents have used the bar as a place for other occasions as well. “We have had funeral and wedding dinners here for people who couldn’t afford a large hall. I would make the food and donate it,” added Spanky.

The reputation of a place for compassion was McMillen’s take, “Spanky has never looked down on anybody. He has poured his heart out. You don’t have establishments and people like that anymore.”

A local business that has raised money for local charities like Christmas for Kids, local veterans groups or other causes, the bar has done more than serve beer.

Over the years, Spanky’s has been a place for a cold beer, or a listening ear.

Leaving the bar will be a big change for Spanky. “I realize that I will miss this. Over the years I have grown special attachments to the regulars, and I have always had a good time.”

Even when people weren’t getting along, he said that owning and running the bar has been a memorable part of his life.

This Friday, Spanky will say good-bye with a going away party. Then, on Tuesday, he will hand over the keys to the new owner.

Asked about the future of the place, Spanky offered, “The new owner is a local guy who wants to put in some windows on the river side. I don’t think he wants to do a lot of other changes right now. He will be good for the community.”

On the front page: Steven “Spanky” Pickens stands behind the bar at his downtown bar just south of the Purple Heart Bridge on Clinton Street.