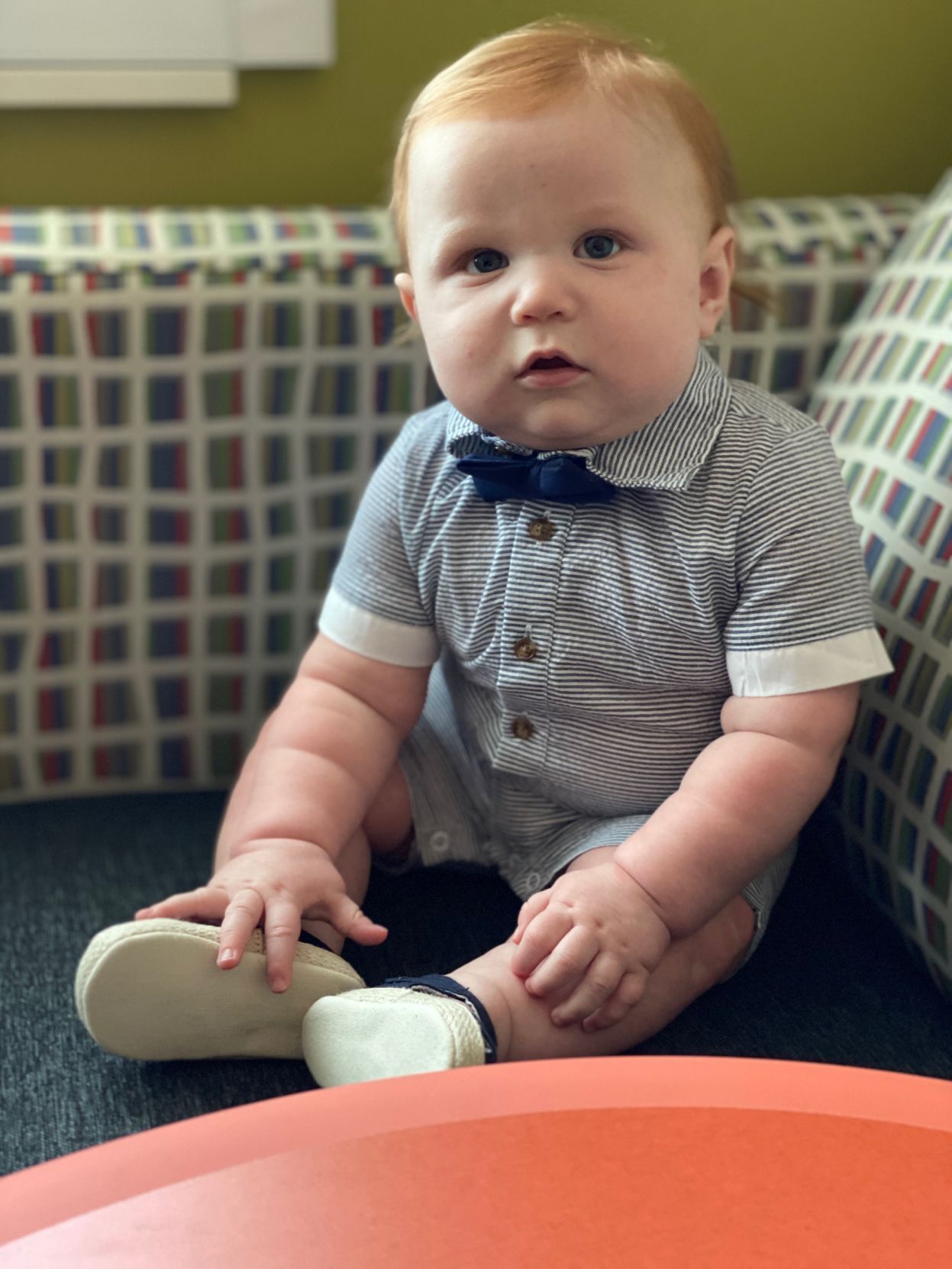 Marshall Joost (shown here) was diagnosed with Pompe Disease, a rare disorder, after newborn screening following his birth in December. His parents, Amanda and Ross, have been working to raise awareness of the disease and of newborn screening. 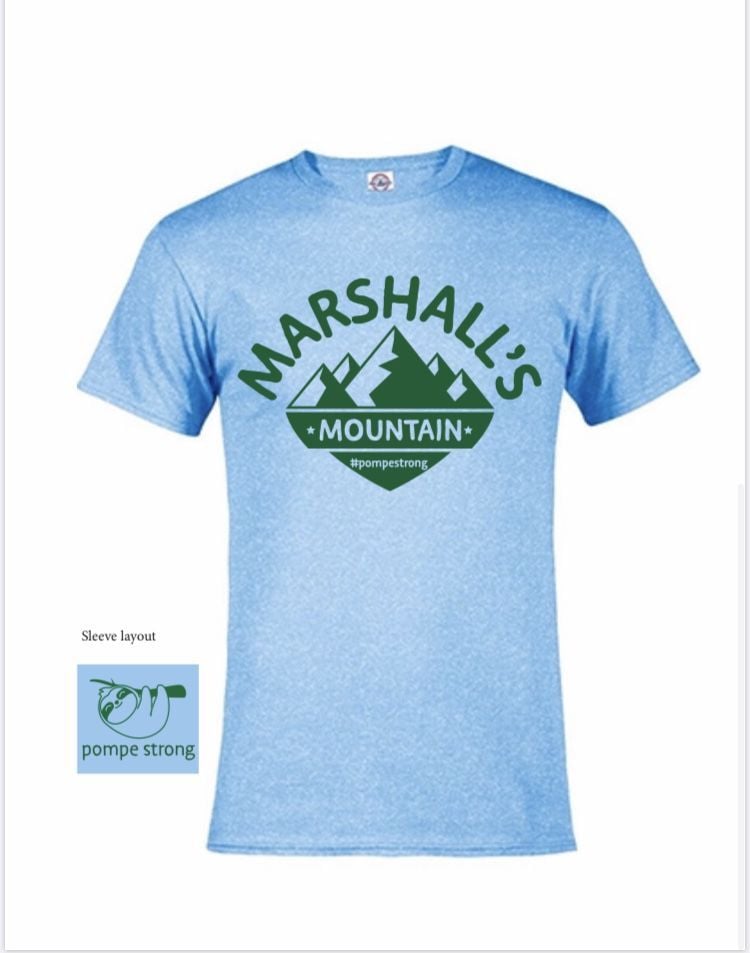 Shown is a T-shirt that was sold to raise money for Marshall’s Mountain, a 501©3 that is working to fund research for the rare disorder Pompe Disease. The non-profit was founded by Amanda and Ross Joost of Sherwood, parents of Marshall, who was born last December with Pompe Disease.

Marshall Joost (shown here) was diagnosed with Pompe Disease, a rare disorder, after newborn screening following his birth in December. His parents, Amanda and Ross, have been working to raise awareness of the disease and of newborn screening.

Shown is a T-shirt that was sold to raise money for Marshall’s Mountain, a 501©3 that is working to fund research for the rare disorder Pompe Disease. The non-profit was founded by Amanda and Ross Joost of Sherwood, parents of Marshall, who was born last December with Pompe Disease.

(Editor’s note: The following is the second of a two-part series about the Joost family of Sherwood. Amanda and Ross Joost have been working to raise awareness about Pompe Disease, a rare disorder which their son, Marshall, was diagnosed with following newborn screening. The family started a non-profit organization, Marshall’s Mountain, to raise funds for research of the disorder. September is Newborn Screening Awareness Month).

SHERWOOD — Once Amanda and Ross Joost of Sherwood learned their newborn son, Marshall, had been diagnosed with the rare disorder Pompe Disease in December of 2019 following his newborn screening test, they dove headfirst into educating themselves about the disease, and how to help spread awareness about newborn screening.

That led to the Joosts learning that both of them are carriers of the genetic disorder, and that their other children, Abram (4) and Elaina (3), are asymptomatic carriers.

Marshall, who was diagnosed with late onset Pompe Disease, with possible early presentation, has been undergoing enzyme replacement therapy (ERT) since February. The therapy, in which he receives synthetic enzymes to replace what his body doesn’t make, has helped Marshall’s lab results “normalize,” and progression of muscle damage associated with the disease come under control.

“We attribute Marshall doing well to newborn screening and early detection,” said Amanda. “Newborn screening started as a public health initiative, and is arguably one of the most successful ones. Marshall is a perfect example, because of newborn screening, his quality of life is going to be night-and-day from what it would have been if he hadn’t been screened.”

Said Ross: “Newborn screening has made such a huge impact on our lives, and so I’ve been helping Amanda, who has taken the lead in making sure other people have the same opportunity at screening that we did.”

Amanda has since started working with the EveryLife Foundation for Rare Diseases, and the Rare Disease Legislative Advocates (RDLA) to bring awareness to, and secure government funding, for newborn screening.

“I spoke about the Rare Disease Congressional Caucus, which is a meeting where legislators can go to be educated on concerns regarding living with rare diseases, and areas where funds for research needs to be focused,” added Amanda. “I spoke about concerns from patients and caregivers, and to give the rare disease community a voice.”

Another area in which Amanda shared information with legislators was on the renewal of the Newborn Screening Saves Lives Act. The original legislation helped get federal funds to the states so that states could maintain and improve their newborn screening panel.

“That legislation was up for renewal in 2019. It passed the House of Representatives, but it has been sitting in a Senate committee for review,” said Amanda. “Hopefully it will pass the Senate, and be signed into law soon. Providers would continue to receive education regarding newborn screening and its availability, and states would receive federal funds to continue newborn screening, and add additional diseases to their panels.”

Added Amanda: “Our long-term goal is that every state is able to screen for every rare disorder.”

In addition to advocating for newborn screening at the state and national level, the Joosts also went to work to raise money to help fund research for Pompe Disease. They started their own 501©3 organization and went to work raising funds to send to Duke University (which is on the cutting edge of Pompe Disease research).

Fundraising efforts through Marshall’s Mountain (named for the mountain Marshall has to climb to battle the disease which does not have a cure as of yet), led to raising a substantial amount of money.

“It started as a fundraiser I called Marshall’s Mountain, with a goal of raising funds in our community we could send to Duke,” said Amanda. “At Duke, which is the epicenter of Pompe research, a clinical trial is underway on gene therapy, which would be a cure for the disease. So we raised $15,000 to send to Duke.

“We decided we didn’t want to stop there, so we applied for Marshall’s Mountain to be a non-profit (it has received approval), so we can continue to raise funds for Pompe Disease research at Duke,” added Amanda.

The funds were raised through donations and sales of Marshall’s Mountain T-shirts.

Said Amanda: “There is a new treatment that should be available next year, and is currently awaiting approval from the FDA (Food and Drug Administration). That treatment is resulting in better outcomes for patients, and further slowing progression of the disease. Hopefully it will become available to Marshall as soon as possible.

“As hard as it was initially when we found out about Marshall’s diagnosis, we are so grateful to be armed with the information we have,” added Amanda. “Now, we have an opportunity to give him the best quality of life.”