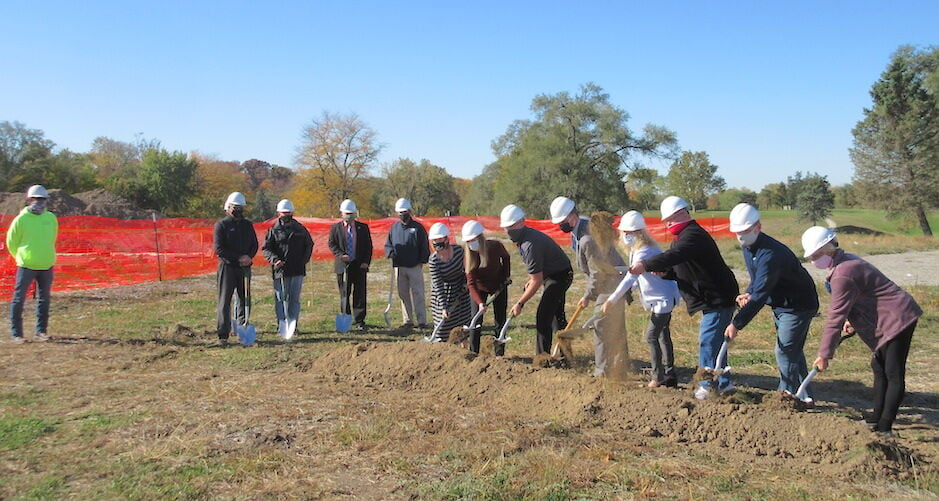 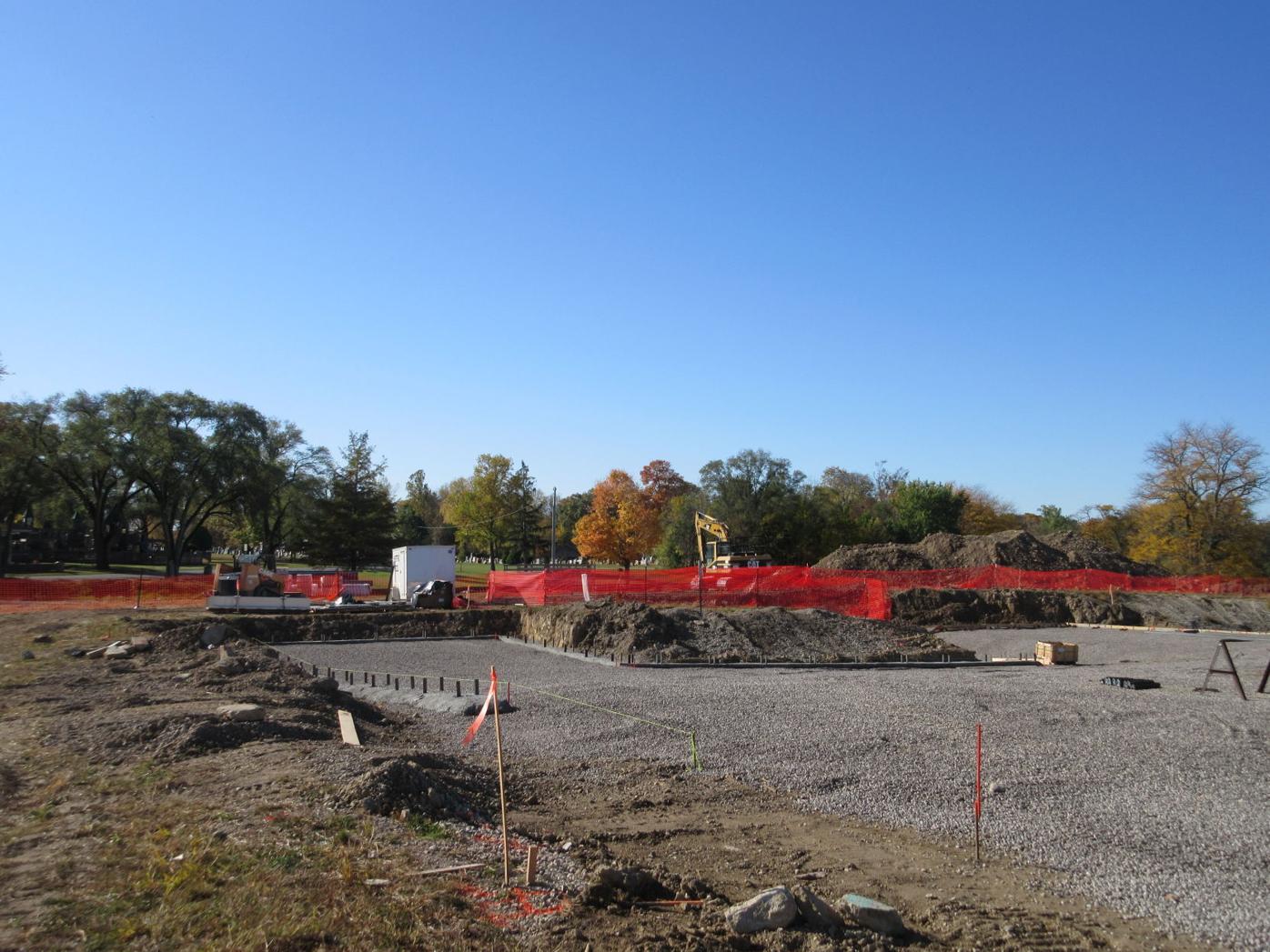 This photo shows progress on Napoleon’s new pool project on Woodlawn Avenue. The pool installation project began earlier this year in a separate contract, while a ceremonial groundbreaking was held Friday for work on a bathhouse and adjacent municipal golf course clubhouse. 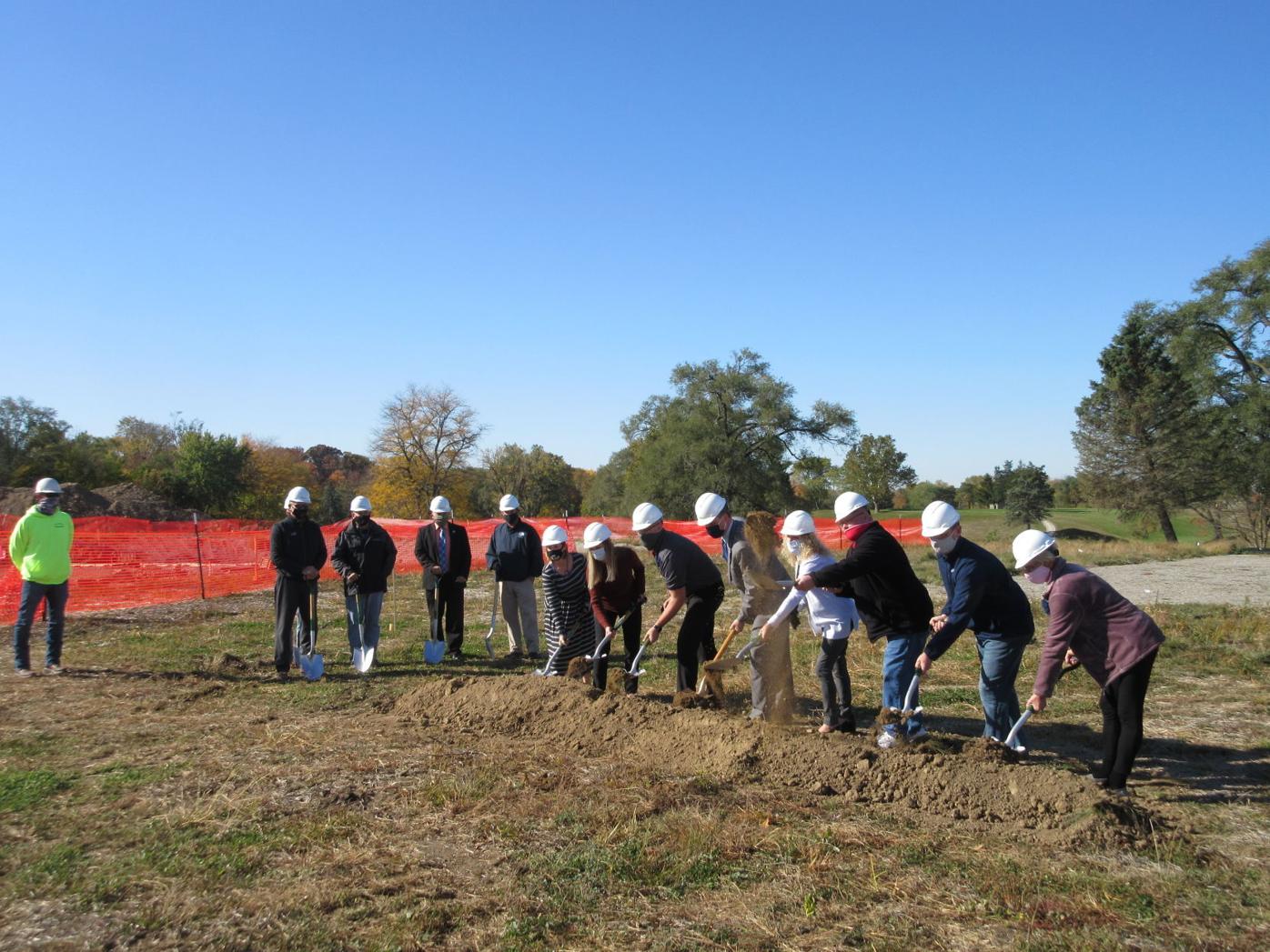 This photo shows progress on Napoleon’s new pool project on Woodlawn Avenue. The pool installation project began earlier this year in a separate contract, while a ceremonial groundbreaking was held Friday for work on a bathhouse and adjacent municipal golf course clubhouse.

Mayor Jason Maassel, donned in a hard hat, led others in the ceremonial first toss of dirt late Friday morning at the site, just north where pool construction has been ongoing for weeks.

The contracted cost with Midwest Contracting, Holland, for the aquatic center/bathhouse and clubhouse project on Woodlawn Avenue is $1,517,000. The company was the low bidder among 10 firms that submitted proposals.

Evidence of that work was abundantly clear in the background of Friday’s ceremonial groundbreaking. Footers for the new pool have been placed, while the various depths — including a zero-level entry feature — are apparent.

The new pool is being constructed on the site of the old facility, which was removed earlier this year.

Maassel described Friday as a “good day” for Napoleon and thanked all those who made it possible. He especially praised the city’s parks and recreation director, Tony Cotter, and his staff for keeping the old pool going.

“... his team, his crew, they kept that old pool really well maintained for a long time,” said Maassel. “We knew it had issues, and Tony and his crew spent a lot of sleepless nights keeping that old pool going.”

Cotter offered some comments as well, reiterating thanks to the groups involved, but also recalling how the citizen effort to pass a 1.9-mill, 20-year pool levy that made the project possible unfolded.

He noted that a local resident (Kelly Sonnenberg) approached him in late 2017 about the possibility of a project, referencing other northwest Ohio communities who were adding new water features. She asked: “Why can’t we have this in Napoleon?”

Cotter told her that we can, “but it’s going to take a lot of work, and not just from city people, but from community members like you. And she says, ‘what do I need to do?’ I said, well, get a group of people together and really push for this, and she says, ‘I’m on it.’ And she was. She approached myself, she approached City Manager Joel Mazur, and said that we want to do this.”

Thereafter, continued Cotter, city officials began meeting with Sonnenberg and her group at parks and recreation board meetings, committee sessions and city council meetings. He said “they put forth a very strong argument” for a project in Napoleon.

“She enlisted some help from some very driven people like Rachel Bostelman, Lisa Thompson, Lisa Nagel, Heather Gallagher, Molly Knepley, Ryan Funchion — I’m sure I’m missing a few, but they really put the hard work into it,” explained Cotter. “They campaigned and they really got the community support. A project like this is a pretty big financial investment for the community, and they were very successful in telling this community this would be great for Napoleon.

“So, we’re finally to that point and couldn’t be any happier,” concluded Cotter. “So, my thanks to everybody that’s involved — the pool commission, city council for supporting it, the parks and rec board for supporting it and this community for supporting it. So, as the mayor said, this is a good day, and we’re really looking forward to a facility that will be enjoyed for generations to come. So, thank you very much.”

The pool contract was separated from the bathhouse/clubhouse portion of the project because combined bids came in too high earlier this year. As the total cost was 10% above the engineer’s estimate, Napoleon City Council had no choice but to reject the bids for a single project contract.

Changes were made to the original project specifications for the bathhouse/pumphouse portion to achieve the requisite cost savings. The changes include smaller buildings, reduced deck space, a different roofline and a thinner concrete deck (from six inches to four).

Napoleon voters had approved the 1.9-mill levy in May 2019 to provide funds for the project, with expenditures capped at $3.5 million.

City officials hope to have the new pool and facilities open around Memorial Day weekend 2021.