Get Started
You are the owner of this article.
Edit Article Add New Article
Home
e-Edition
News
Sports
Obituaries
Crimewatch
Business
Classifieds
Multimedia
On the Wire
Reader Services
Find A Job
1 of 6 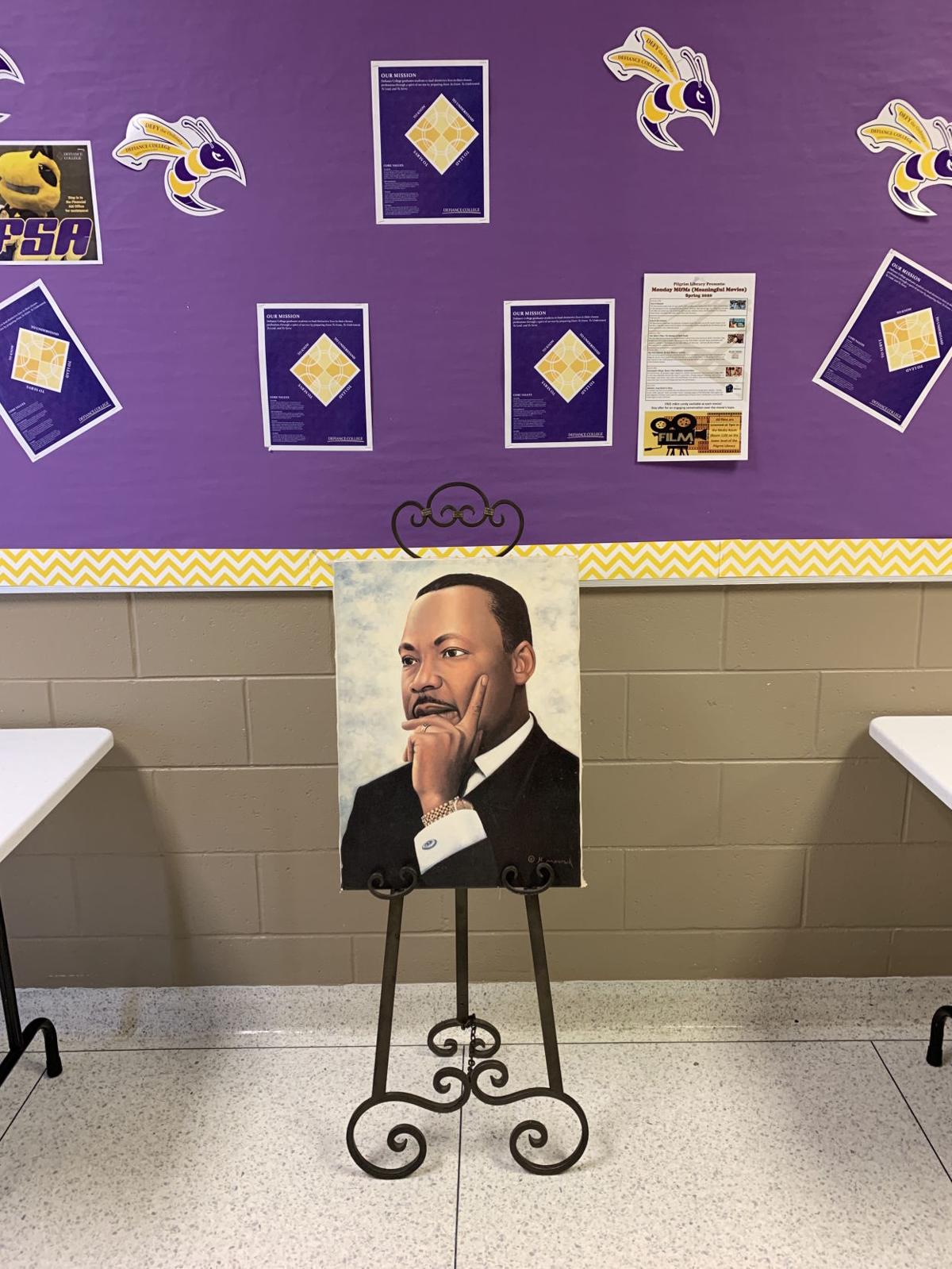 A painting of Dr. Martin Luther King Jr. was on display outside of Schomburg Auditorium on the campus of Defiance College Monday, prior to the fifth annual MLK program put on by members of Galilee Baptist Church in Defiance. 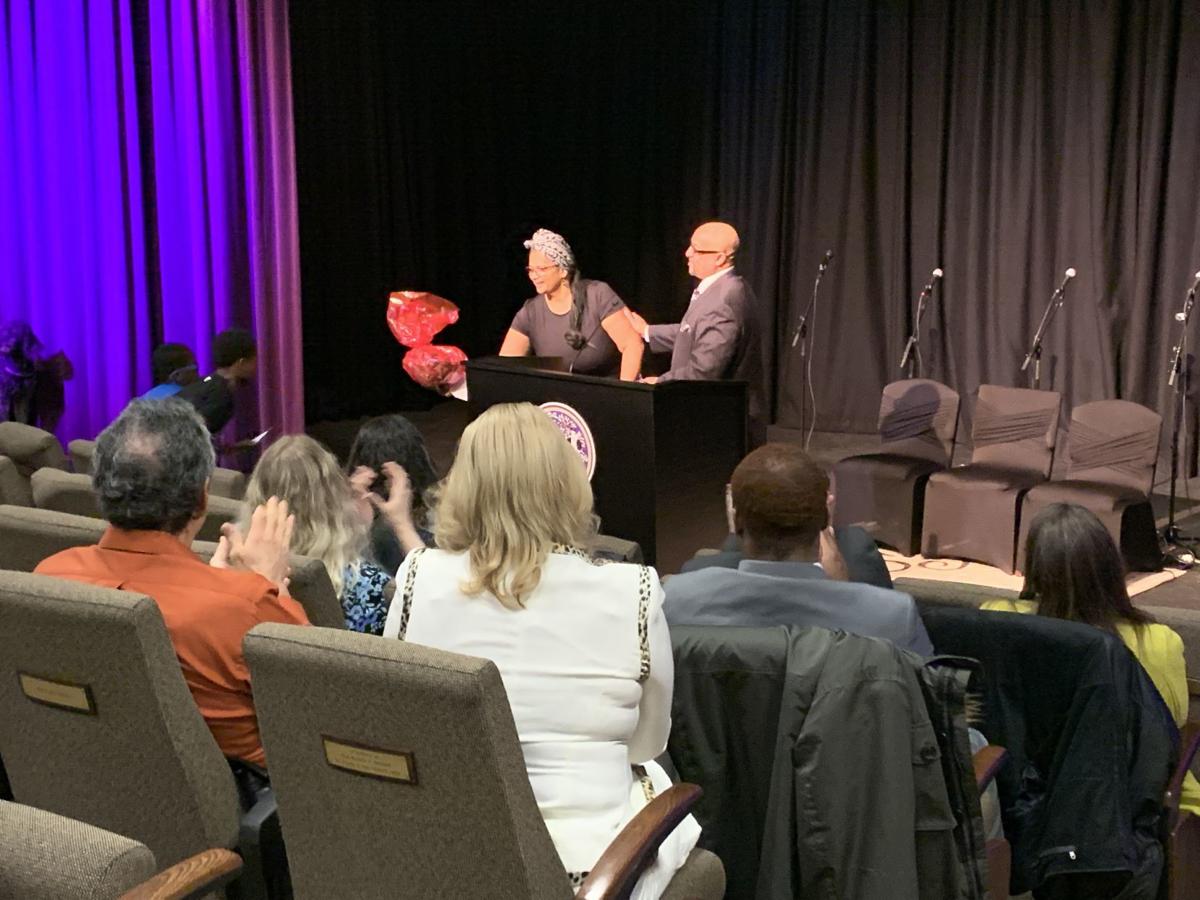 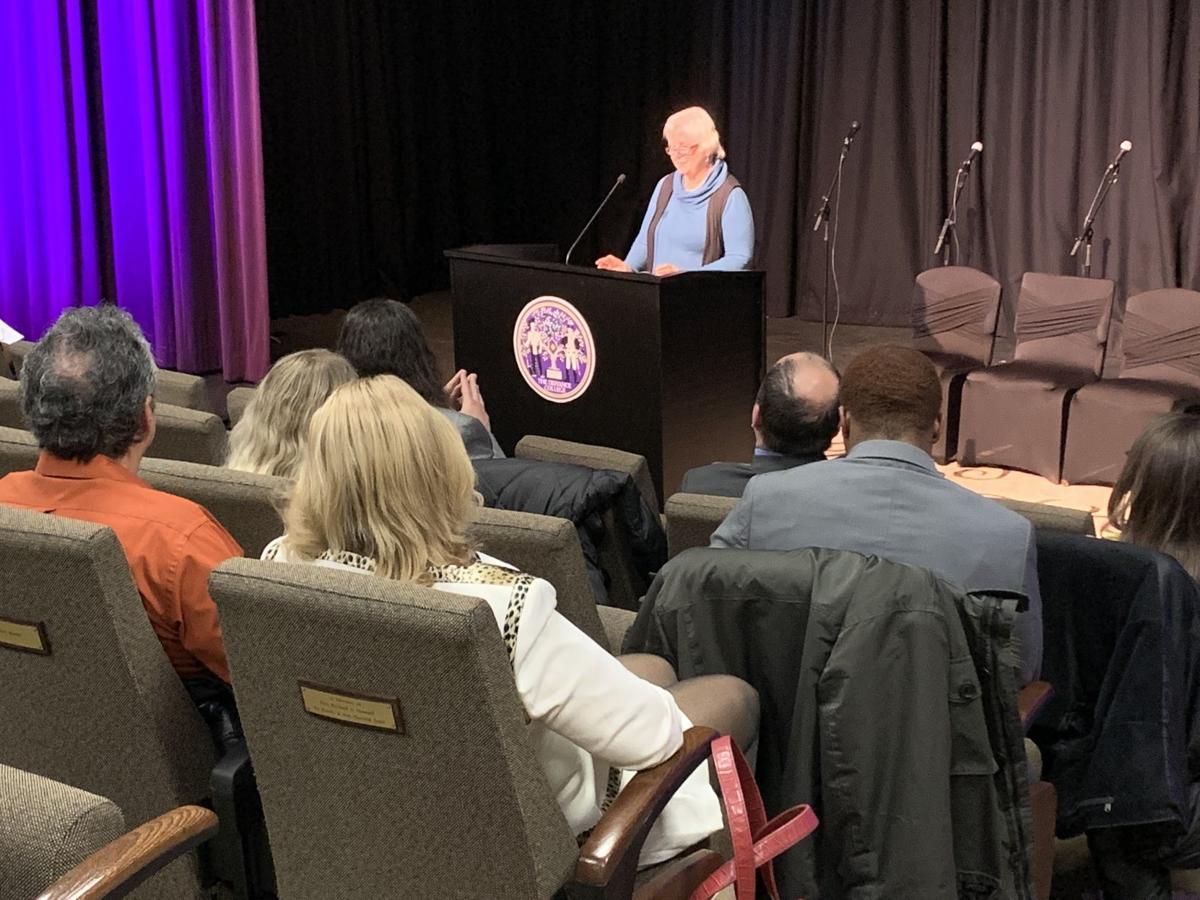 Diana Harbourt of Defiance, was one of the featured speakers at the fifth annual MLK program Monday at Schomburg Auditorium. Harbourt spoke of contributing to your community through the ordinary. 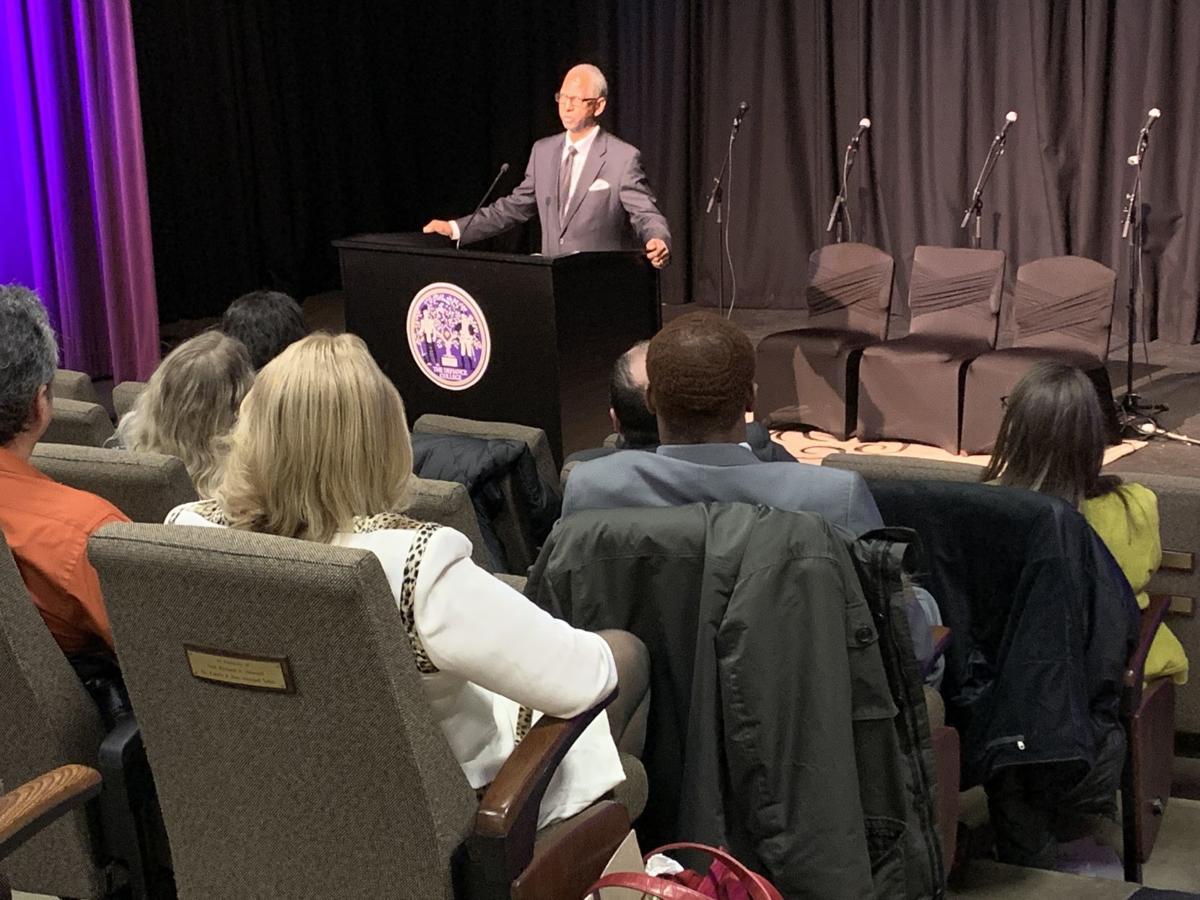 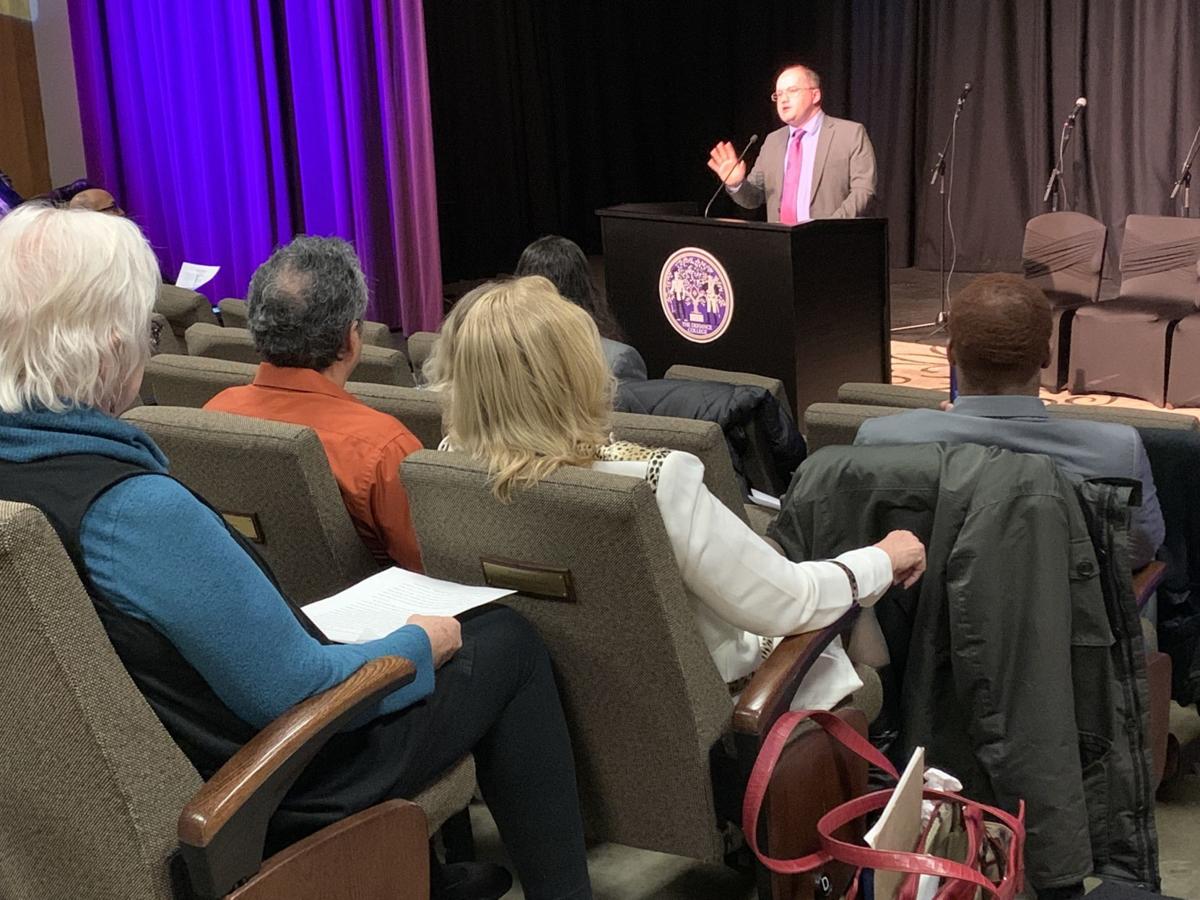 Dr. Thomas Wedge of Bowling Green State University was one of the featured speakers at the fifth annual MLK program Monday at Defiance College. 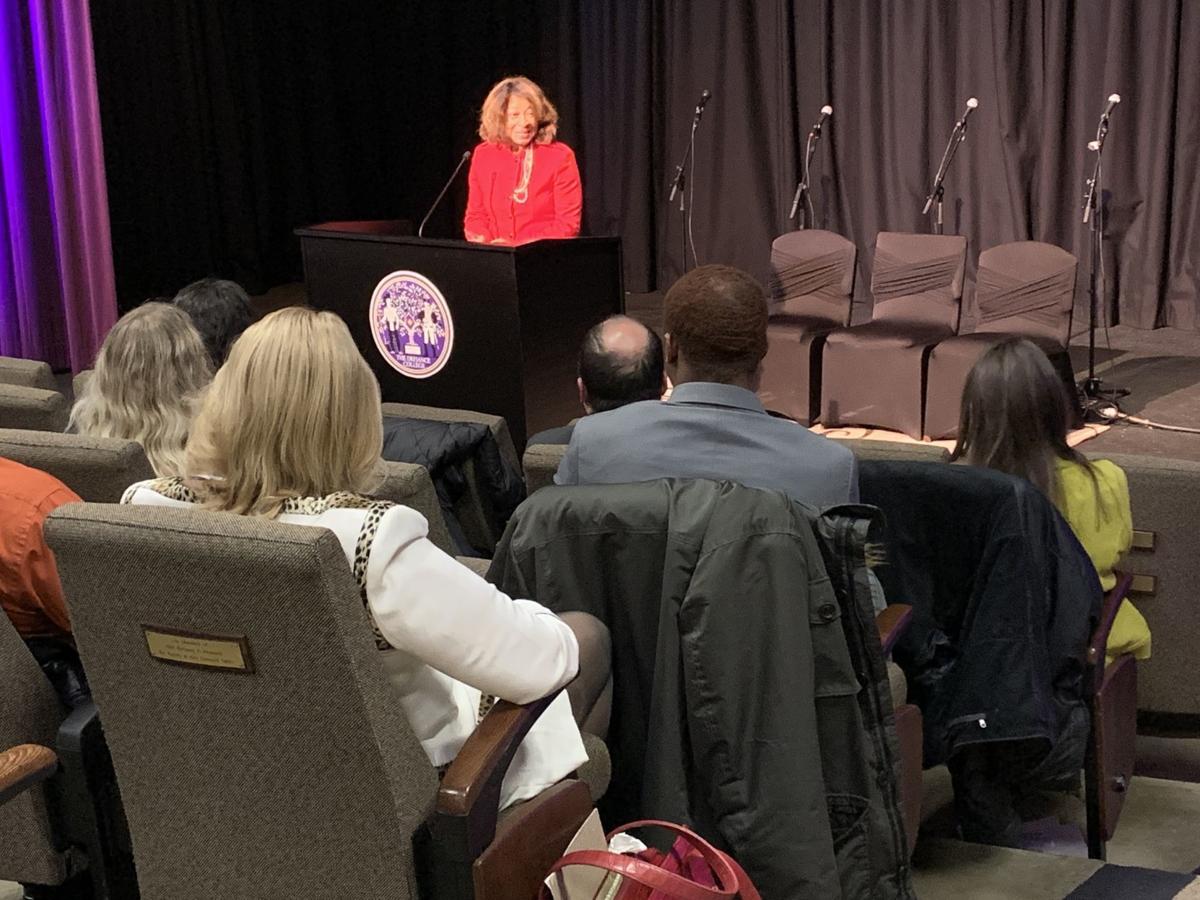 Dr. Gwen Williams of YouthBuild in Elizabeth City, N.C., was one of the featured speakers at the fifth annual MLK program at Schomburg Auditorium on the campus of Defiance College.

A painting of Dr. Martin Luther King Jr. was on display outside of Schomburg Auditorium on the campus of Defiance College Monday, prior to the fifth annual MLK program put on by members of Galilee Baptist Church in Defiance.

Diana Harbourt of Defiance, was one of the featured speakers at the fifth annual MLK program Monday at Schomburg Auditorium. Harbourt spoke of contributing to your community through the ordinary.

Dr. Thomas Wedge of Bowling Green State University was one of the featured speakers at the fifth annual MLK program Monday at Defiance College.

Dr. Gwen Williams of YouthBuild in Elizabeth City, N.C., was one of the featured speakers at the fifth annual MLK program at Schomburg Auditorium on the campus of Defiance College.

A crowd of nearly 80 community members of all ages was in attendance on a Monday afternoon at Schomburg Auditorium on the campus of Defiance College, for the fifth annual MLK program, led by Pastor Ray Gaffney, program chairman Mary-Michael Jackson and several volunteers from the Defiance College football team.

All were on hand to celebrate the legacy of Rev. Dr. Martin Luther King Jr., nearly 52 years after the acclaimed civil rights leader was killed by assassin James Earl Ray on April 4, 1968, on the second-floor balcony of the Lorraine Hotel in Memphis, Tenn. Attendees were greeted by Gaffney, who welcomed all, before The Galilee Gospel Singers performed “Hold Up The Light.”

Gaffney introduced the first of several speakers, Defiance Mayor Mike McCann. McCann shared that while in no way can he compare himself to King, he too has big dreams.

“Although I can’t be compared to Dr. King, I too have dreams,” said McCann. “I want to live in a community where children are born to married mothers and fathers, and grow up with their family; where the plague of drug and alcohol abuse leaves us forever; and where our schools are held in the highest regard locally, in the state and nationally. So I ask all of you, do you have dreams? Help me, help you realize those dreams.”

George Westrick of Defiance, who has been involved in men’s ministry for more than 40 years, then spoke of service to his fellow man, which King preached.

“Mary first asked my wife, Rita, to speak and she said, ‘No, but my husband, George, will,’” began Westrick as the crowd laughed. “I wasn’t sure what I could offer, but after praying about it, God said to me, ‘George, you’re a child of God, and that’s the only position you need in this life.’ God puts us where we can do great things, with the help of family, friends, teachers and mentors. He wants us to serve others, and he wants us live in a world of inclusiveness.”

“Growing up in Mark Center, I didn’t hear the word, prejudice, in our home. I was taught to treat people the way I wanted to be treated,” said Lampert. “Why is there so much hatred against people of different races, backgrounds or religions? Three years ago, my husband, Mark, and I went to the Dominican to teach Bible school to kids, but at the church where we were, there was a fence up to keep Haitian children and adults out.

“I told them to take that fence down and to let them in,” added Lampert. “That fence has been down ever since! The hatred must stop, and stop with us.”

Donovan Gaffney, the son of Pastor Ray Gaffney and a student at Bowling Green State University (BSGU), then introduced the first of three professors from the school who teach African American studies, literature and popular culture. Dr. Thomas Wedge shared some of the history of how Martin Luther King Jr. Day became a national holiday, (with opposition), and Dr. King’s legacy of “Speaking the powerful truth to powerful people.”

Said Wedge: “Leadership in the style of Dr. King is not about putting ourselves on a pedestal, it’s about using our time and gifts to help others.”

Jackson introduced her friend, Diana Harbourt of Defiance, who shared she’s just an ordinary person, but in the ordinary, she has met people who have changed her life, while helping to change their lives.

“I’d like to talk to you about being a contributor to a community, and although it may appear difficult, it’s rather easy,” said Harbourt. “I’m just an ordinary person, doing ordinary things, like playing in the community band, singing in the church choir and working in our church food pantry. Each of these things are done with love of music, or helping. Another thing I do is assist people who need a hand and provide transportation for those who need it.

Following Harbourt, Donovan Gaffney introduced Dr. Jolie Sheffer from BGSU, who spoke about the complex history of America, and about spending the past 20 years teaching literature and history. Said Sheffer: “There is no American culture without the contributions of black folk and other minoritarian groups.”

Young Christopher and Jordan Jackson, Mary’s grandsons, then read quotes from Ghandi and George Washington Carver about change and hope.

Professor Jeremy Wallach from BGSU addressed the crowd by sharing that although 2020 is the 25th anniversary of MLK Day in America, Dr. King left a global impact much like Ghandi and Nelson Mandella, all of whom championed change through the use of non-violent protest.

Wallach explained King inspired many other rights movements, and that he inspired all when he said, “Everyone can be great, because everyone can serve.”

Pastor Dave Brobston of St. Paul Lutheran Church, who also serves as chaplain of the Defiance Police Department and Defiance County Sheriff’s Office, shared a pair of personal stories from his youth, including running the 400 meters in high school against former World Record Holder Butch Reynolds, and the pushback he and his girlfriend Pam, an African-American girl, got from their families when they learned they were dating.

“Martin Luther King Jr. was all about diversity, and here we are all these years later, and I’m tired of division,” said Brobston. “To borrow a phrase from the movie ‘The Last Mile,’ ‘I’m tired boss.’ When we walk together, it’s amazing how things disappear, we see past labels and we see each other as humans.”

Dr. Gwen Williams, program director for YouthBuild in Elizabeth City, N.C., shared that Martin Luther King Jr. Day is not about having a day off, it’s to celebrate service and to serve one another. Said Williams: “No other day in America is like this day, it’s a day to bring people together to serve others!”

Williams shared about the YouthBuild program, and how it’s currently serving 62 young people from ages 16-24 with education and hands-on construction experience. Said Williams: “Our education and construction programs allow people to have hope they can work their way out of their current condition.”

Pastor Clark Kent Morgan of Love Baptist Church in Swanton, passionately recited King’s famous, “I Have a Dream” speech, drawing a standing ovation from the crowd when he finished. Mary-Michael Jackson and Pastor Gaffney gave the closing remarks, before everyone stood to sing, “We Shall Overcome.”

Tracey Dysart Ford, vice president of enrollment management at Defiance College, finished the program by thanking everyone for attending.