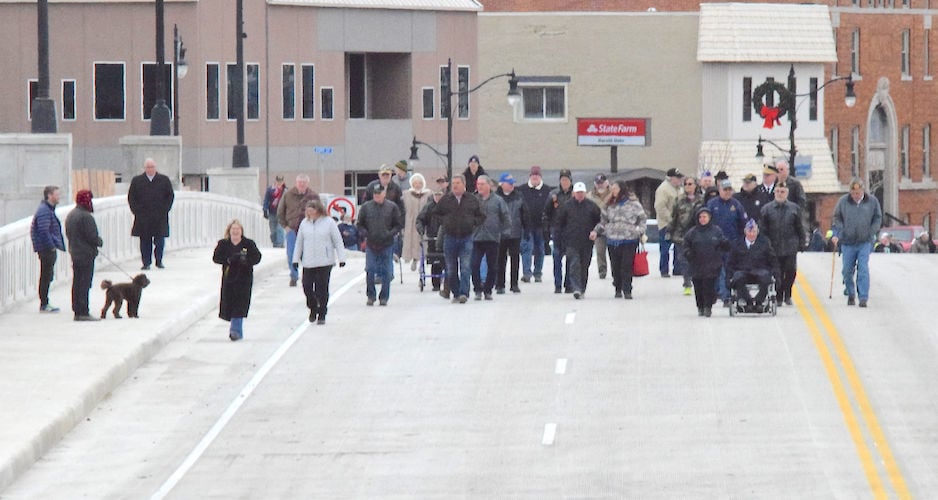 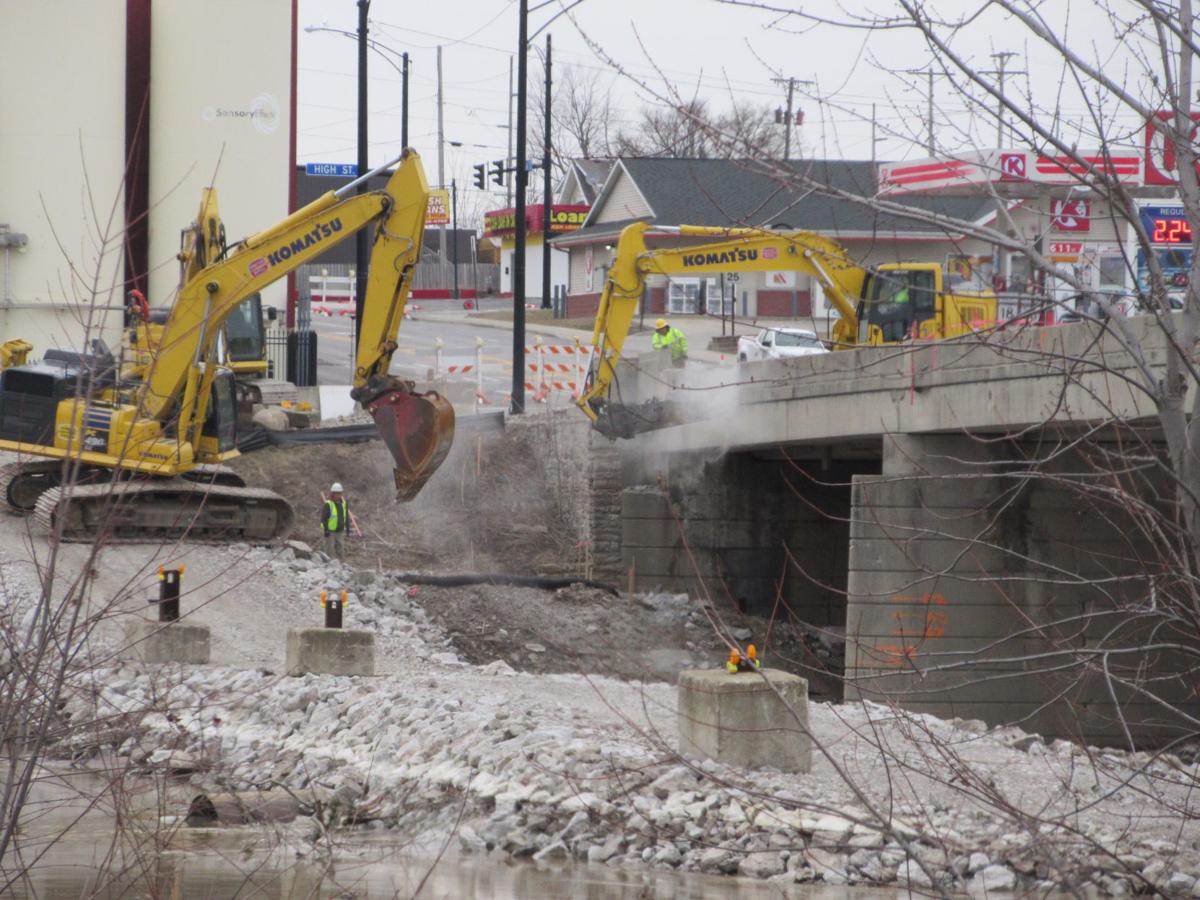 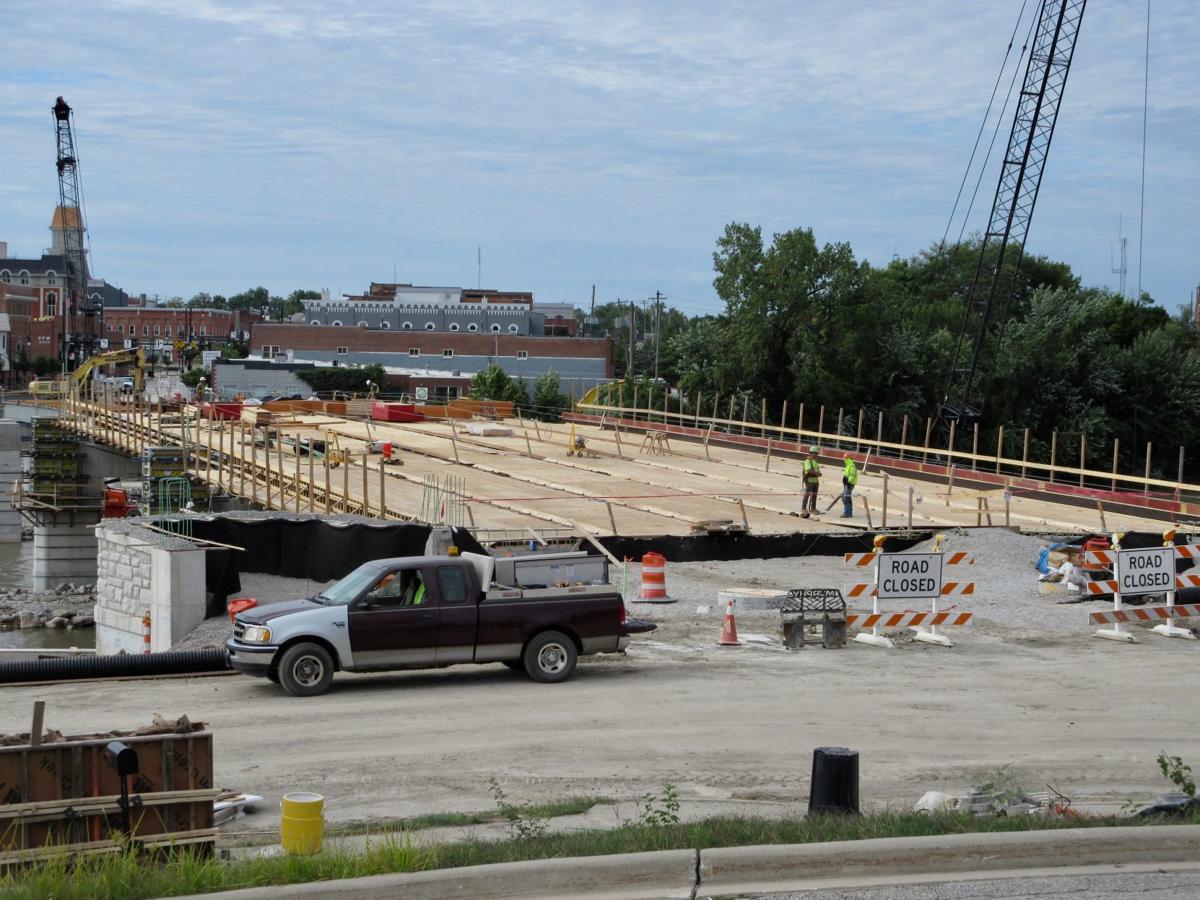 By early September, work on the new Purple Heart Bridge was progressing well, with temporary decking in place before the concrete deck was poured in early October.

By early September, work on the new Purple Heart Bridge was progressing well, with temporary decking in place before the concrete deck was poured in early October.

With the Purple Heart Bridge now open to traffic, it’s returned to business as usual in downtown Defiance.

“Business is booming again, like it should be,” said Sarah Baldridge, an employee at Circle K, 117 N. Clinton St.

Baldridge said as far as staffing goes, they “might have had to cut three hours here and there” during the bridge closure, but added that for the most part, staffers hours remained the same.

“But, I’m glad the bridge is done, especially with it being the holidays, because that brings in a little more business also,” Baldridge said.

Karl Kissner, owner of Kissner’s Restaurant, 524 Clinton St., said it’s tough to determine whether the increase in customers he’s seen at the restaurant is due to the bridge reopening, or the fact that it’s prime season for the Tom and Jerry — the popular holiday drink that brings an influx of customers through his doors each December anyway.

“It’s really hard for me to determine the business impact of the bridge reopening, because it’s the Christmas season,” Kissner said. “The flow of traffic is obviously back downtown, I like to say that the racetrack is back open.”

Kissner said he suspects being positioned at Clinton and Fifth streets, and farther from the bridge work itself, might have benefitted him during the closure.

Given he lives on the north side of town, Kissner noted it’s been “phenomenal” being able to drive to work without detouring.

But he also wondered if those detours might have been a boon for area businesses along paths less traveled by motorists.

“There are a lot of businesses, service industry businesses and things like that, that got new exposure that they haven’t seen in quite some time,” Kissner said. “I’m hoping that holds.”

Floyd Culver, interim executive director/CEO of the Defiance Area of Chamber of Commerce, said he’s seen an increase in the amount of foot traffic downtown.

“The thing I see the most is more people trying to find parking on Clinton Street — it’s extremely difficult, which is a nice problem to have, so to speak, because it shows that the people are down here,” Culver said.

Culver also said he’s observed that the initial rush of traffic into the area immediately after the bridge reopened has tapered off a bit.

“The flow of traffic is improving, I’ll put it that way,” Culver said. “After the initial opening of the bridge it was like we opened a speedway ... everyone was flying through it.”

Kirstie Mack, executive director of the Defiance Development and Visitors Bureau, said the reopening of the bridge “has brought a lot of excitement to the downtown.”

“The community supporting small businesses for their holiday shopping and new businesses calling downtown home adds to that excitement,” Mack said. “The time while the bridge was under construction forced us to think outside the box, and we will continue to do just that.”

One of those new businesses is Herbalife shake and tea shop Healthy U, located at 519 Clinton St. Co-owner Frank Morawski reported that he saw some new faces in the shop shortly after the bridge reopened on Dec. 2, but said he suspects others might now head to the north side for lunch instead.

“We didn’t have much of an issue when the closure happened,” Adam said. “Lunch got busier for us, with many not being able to get lunch other places. We just went with the ebbs and flows. Now that it’s open and it’s the Christmas season, it’s really hard to tell what is because of which thing.”

“It was definitely easier to get in and out of parking spots then,” Adam said. “Now we are back to dodging traffic again and wishing the big trucks were on another route.”

At Miami & Erie Restaurant and Lounge, owner Jeremy Hodges said the implementation of the Defiance Outdoor Refreshment Area (DORA) — along with other downtown business promotions — resulted in business being “actually up a little” despite the bridge work.

“Now that the bridge is reopened, business is about the same as when it was closed,” Hodges said.