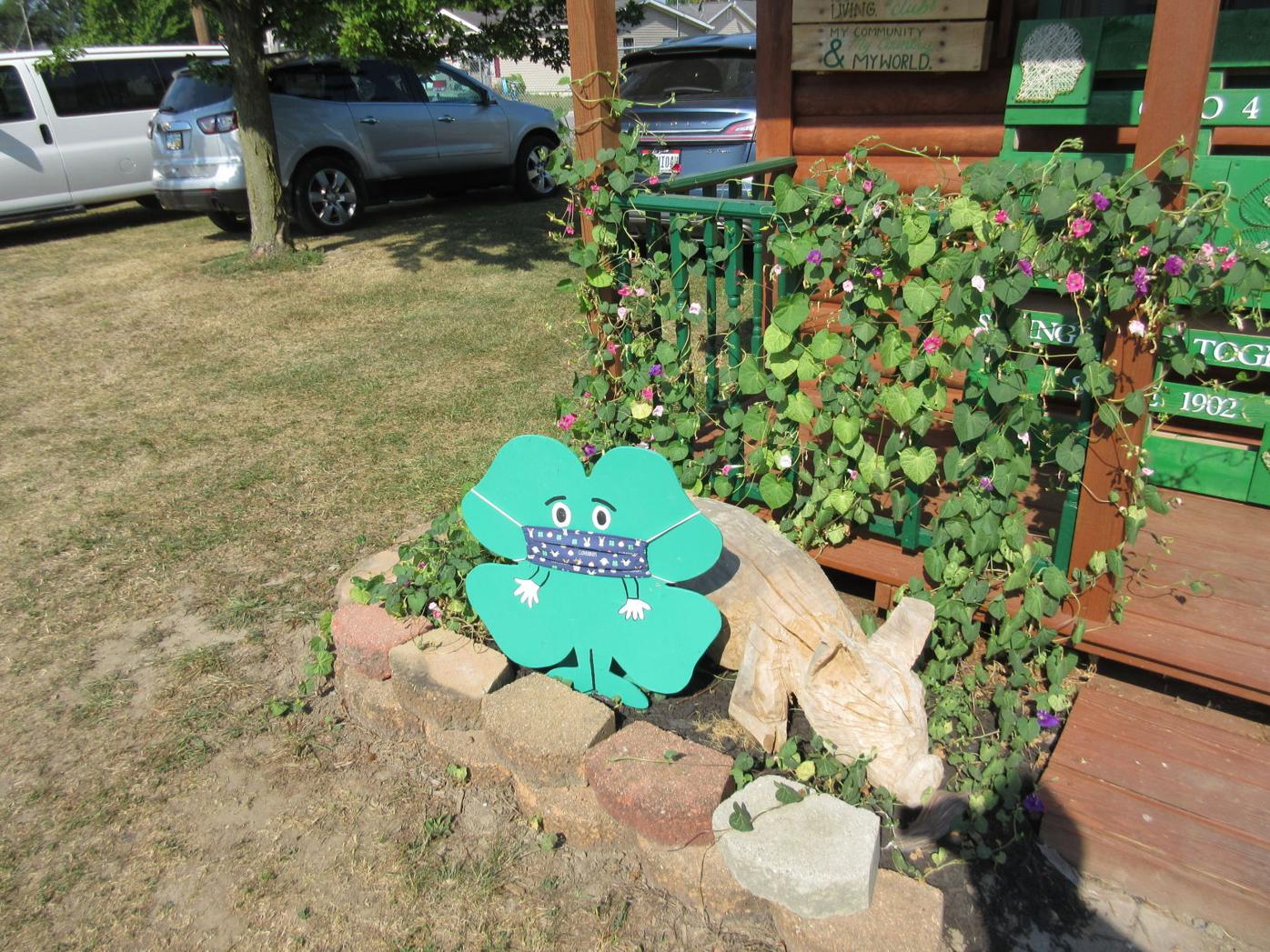 A sense of humor was needed at times as the Defiance County Fair operated under guidelines from the health department this year. Here, someone has placed a mask on a caricature of the 4-H four-leaf clover symbol on the fairgrounds. 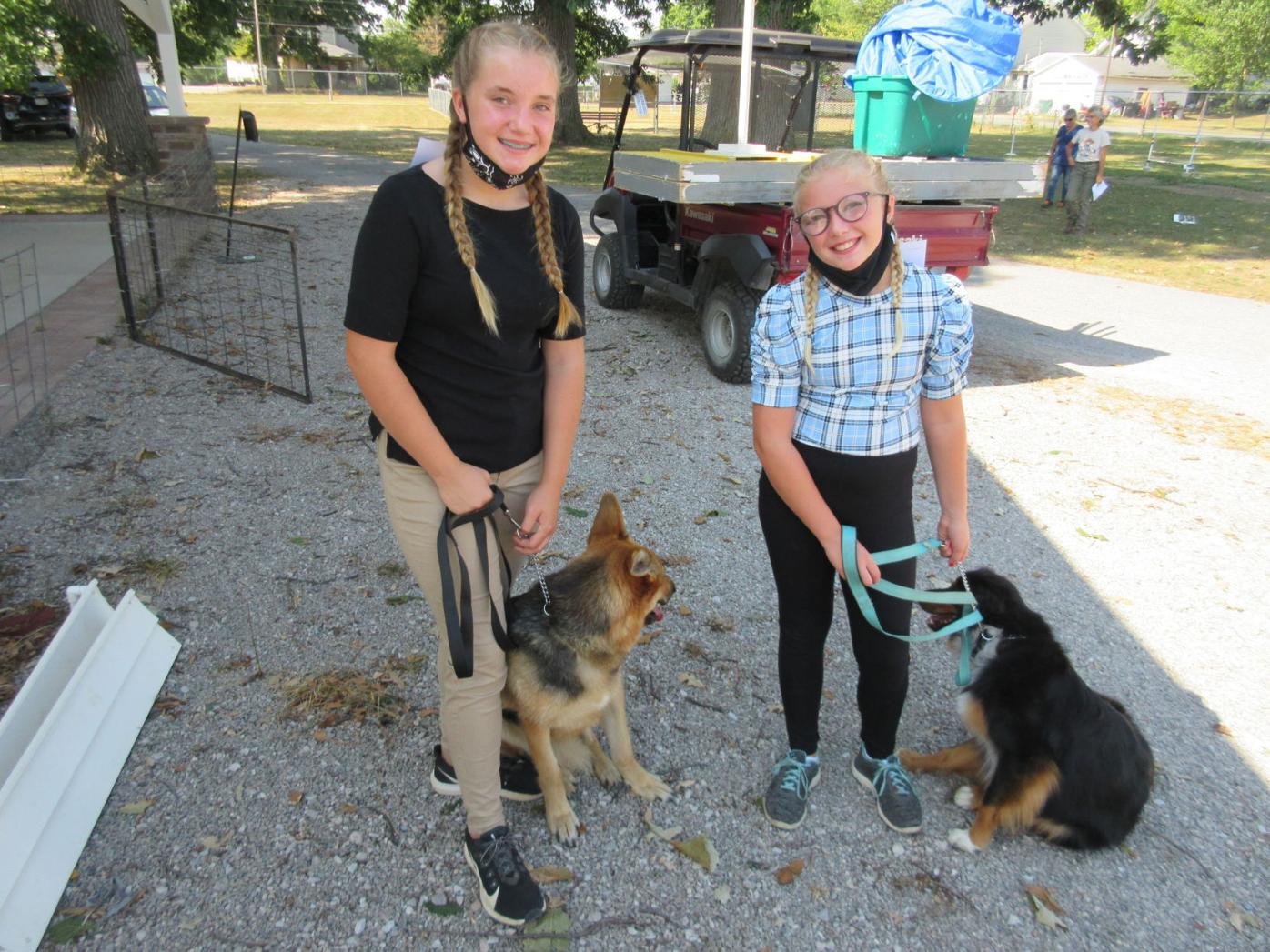 Jocelyn Baldwin (left) and Elise Baldwin, of Hicksville, are shown with their dogs, Gracie (left) and Mia at the Defiance County Fair.

A sense of humor was needed at times as the Defiance County Fair operated under guidelines from the health department this year. Here, someone has placed a mask on a caricature of the 4-H four-leaf clover symbol on the fairgrounds.

Jocelyn Baldwin (left) and Elise Baldwin, of Hicksville, are shown with their dogs, Gracie (left) and Mia at the Defiance County Fair.

HICKSVILLE — Wednesday, Aug. 26, was a busy day for horse enthusiasts at the Defiance County fairgrounds.

Country western music played over speakers in and out of the barns during a picture perfect, if warmer than usual, day. Youth practiced with their horses, talked to their fellow contestants and waited for their chances to show the judged what they knew. Cars, trucks and golf carts ran to and fro across the east end of the grounds.

But this year was undeniably different.

For starters, almost no pedestrians were seen walking casually by on their way to other destinations on the fairgrounds. For another, no vendors were seen throughout the grounds (except for the Shake Shack and Fairview Young Farmers sausage stand, both of which did brisk business).

Most significantly, once anyone got past a certain point at the fairgrounds, the area became like a ghost town, with no sign of human activity anywhere except for the music playing softly in the background.

This year’s Defiance County Fair was sidelined due to the COVID-19 pandemic, with the senior fair pulling events and the junior fair operating under some new rules this year. But for those directly involved in animal sales, it was business as usual.

For certain contestants, among them Hicksville’s Hayle Koscielak, there was nothing to compare. “I never had a horse to bring here until now,” she said good naturedly while trying to maintain control over her rambunctious horse, Tornado. “He’s just excited; it’s his first show too.”

Other, more seasoned hands kept doing what they do, all the while noticing certain differences this year. “There were no campers this year,” said Jami Speiser of Farmer, mother of goat raisers, Owen and Lauren. “I don’t thing there are as many people (exhibiting) this year.”

Defiance County Junior Fair Board officials noted fewer entries this year, noting about 20% less than in years past. Many people have been concentrating on one entry rather than multiple entries.

Changes in the rules came about as a result of the virus as well. “It’s different to bring horses in for one day rather than all week,” Jami Speiser noted, “but everyone is still working hard.”

“It’s pretty normal,” confirmed Lauren Speiser, “but (this year) we have more time at home to get projects done.”

Dog raisers such as Hicksville’s Elise Baldwin had their own difficulties. “There was a big drought of practices this year,” she said, noting that many such practices for dogs and their owners were cancelled.

“Once the other animals get in the pens, the dogs don’t do very well,” explained Trisha Baldwin, mother of Elise and first-time contestant Jocelyn Baldwin, the latter of whom came to last year’s practices but had never shown dogs before.

But while the junior fair participants took part in a strange new kind of fair this year, the most important parts seemed to be intact.

“I think the excitement for the kids is the same,” Jami Speiser said. “The kids still have pride in their projects.”