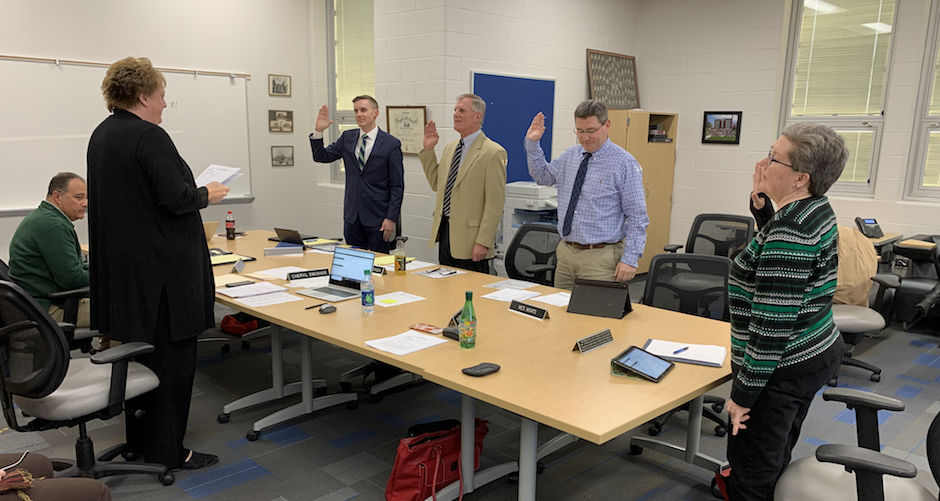 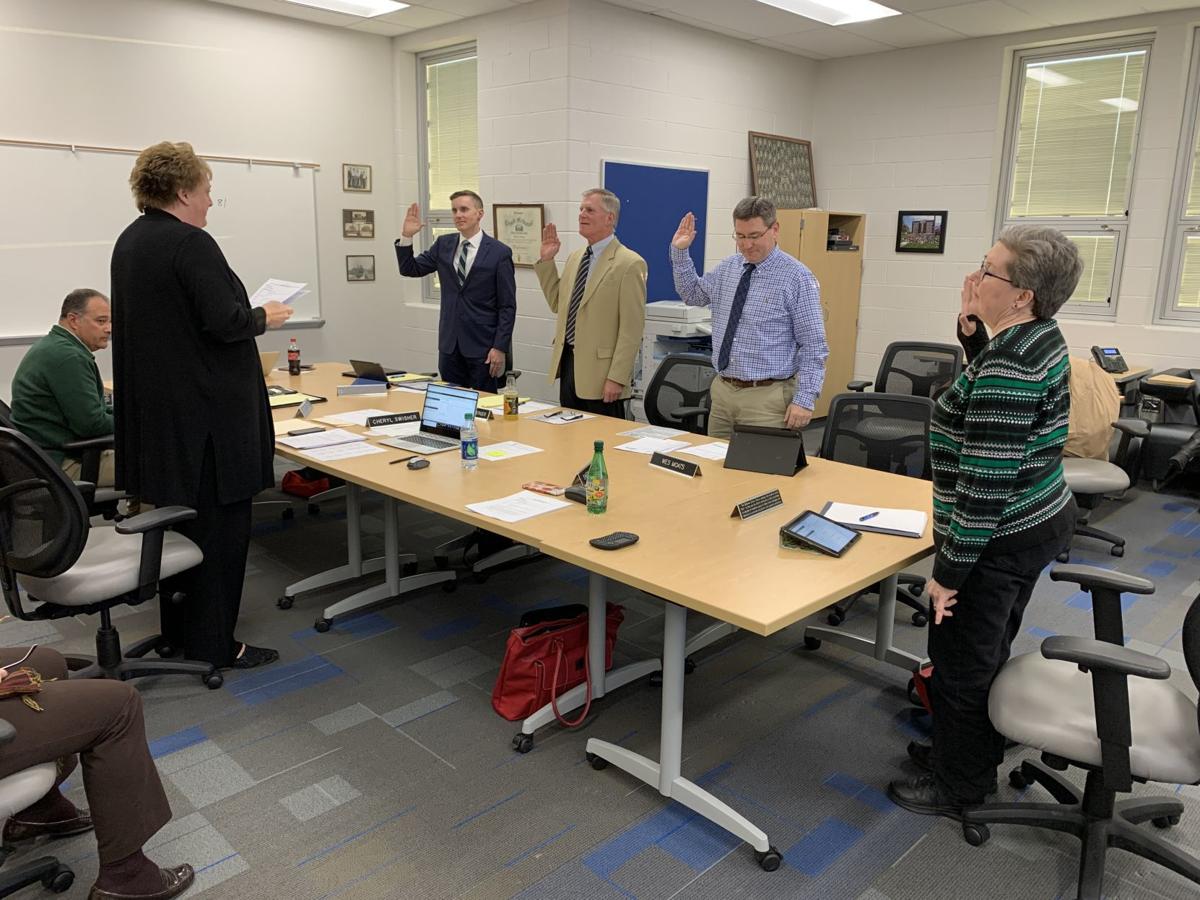 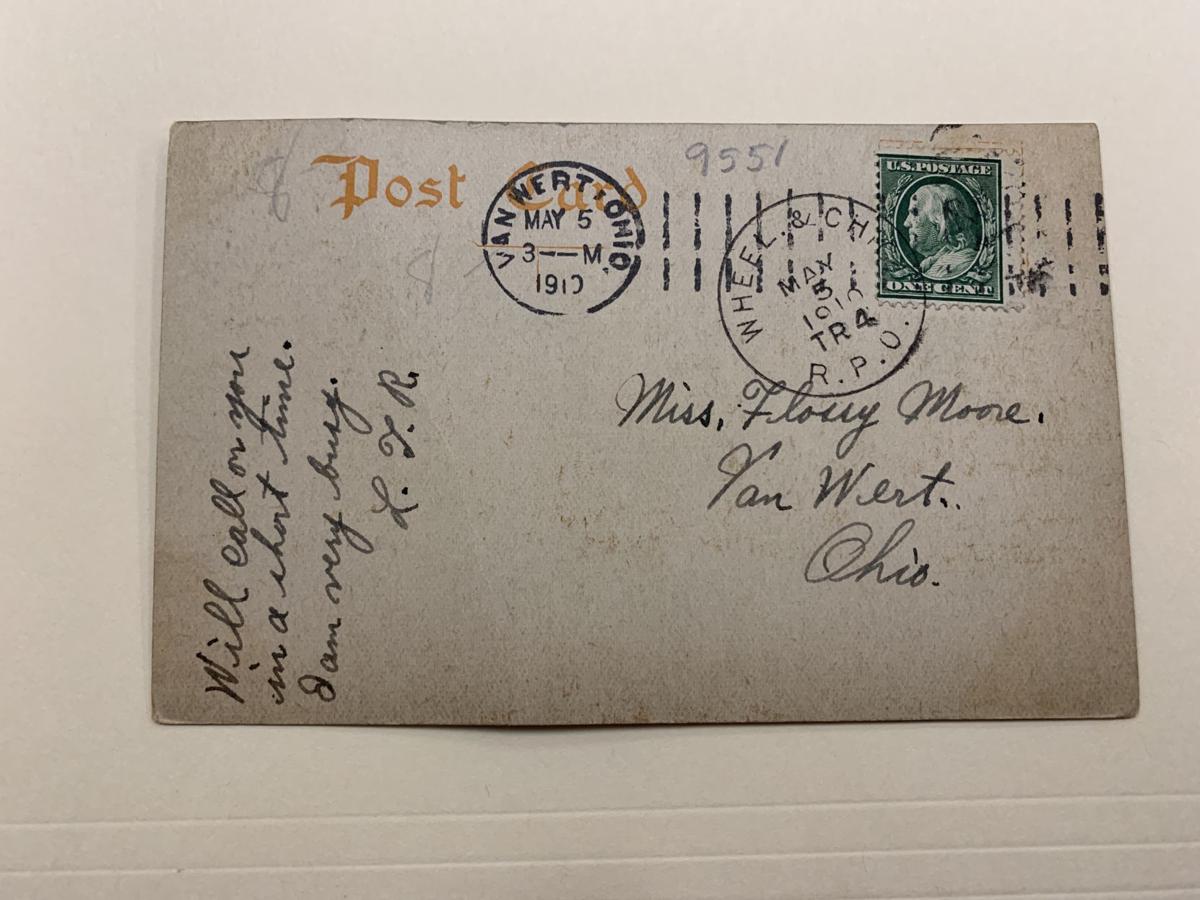 Shown is a postcard dated May 5, 1910, that was sent Defiance City Schools superintendent Bob Morton. On the front of the postcard is a picture of the Central School of Defiance during that time. 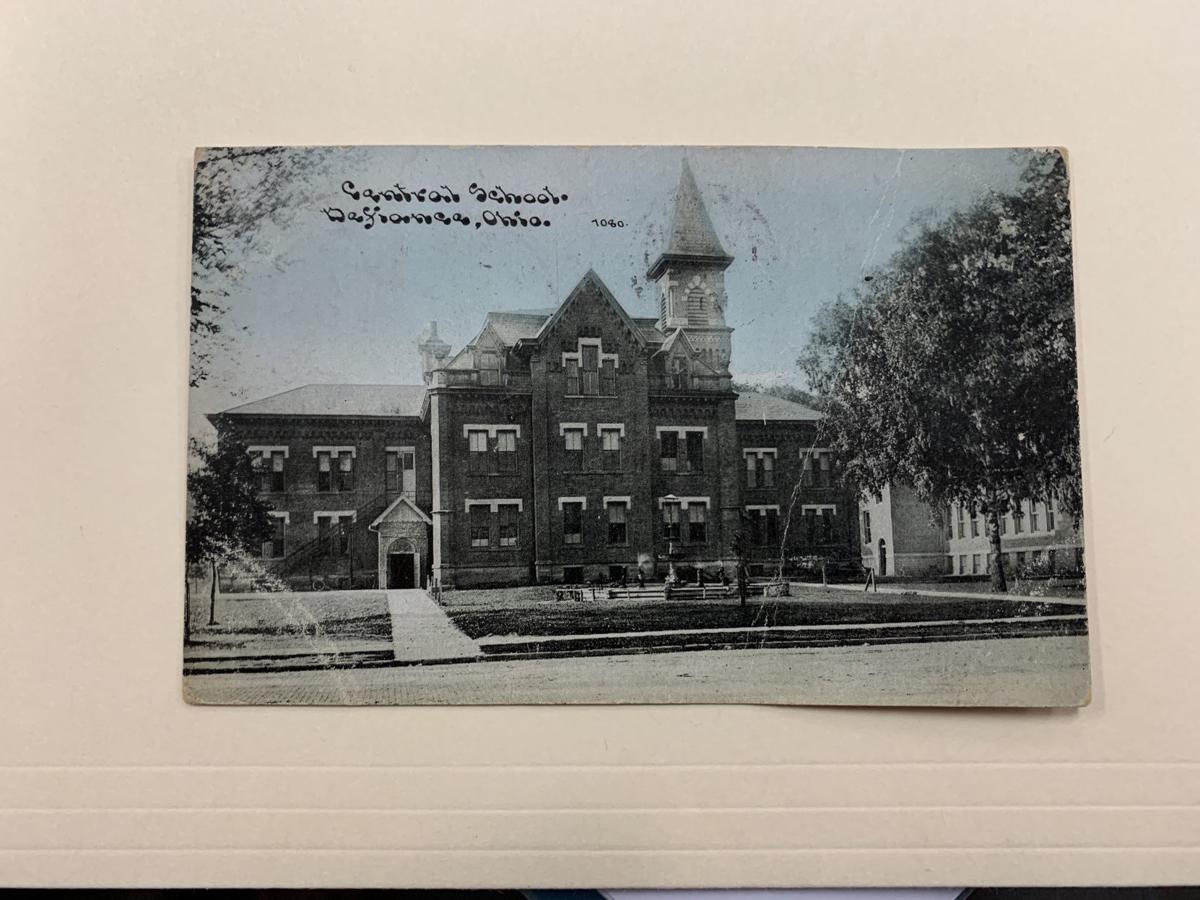 Shown is the back of a postcard dated May 5, 1910 that was sent Defiance City Schools superintendent Bob Morton. On the front of the postcard is the name Miss Flory Moore of Van Wert, to whom the postcard was sent.

Shown is a postcard dated May 5, 1910, that was sent Defiance City Schools superintendent Bob Morton. On the front of the postcard is a picture of the Central School of Defiance during that time.

Shown is the back of a postcard dated May 5, 1910 that was sent Defiance City Schools superintendent Bob Morton. On the front of the postcard is the name Miss Flory Moore of Van Wert, to whom the postcard was sent.

The Defiance City Board of Education held its organizational meeting Wednesday evening, followed by its regular meeting. In addition, the board was updated on improved safety measures, discussed state Student Wellness and Success funding, and heard about a postcard received by the superintendent.

During the organizational meeting, Cathy Davis was elected to serve as president, while Wes Moats was chosen as vice president. Both were sworn in following their election.

Meanwhile, Moats, Chris Oberlin and Garry Rodenberger were sworn in after being re-elected to the board in November, as was newly elected board member Michael Wahl. Wahl replaces Dodi Thompson, who was appointed to the board in July, but lost the election to Wahl.

During the regular meeting, superintendent Bob Morton updated the board about new safety measures now in place at Defiance Elementary School. Beginning this past Monday, any visitor to the elementary school must buzz into the building through a vestibule before entering the school offices.

“This is just like the system we have at the middle school and high school,” said Morton. “It’s another layer of security to keep our students and staff safe at the elementary school.”

Also shared by Morton was a letter sent by Ohio Gov. Mike DeWine about the use of Student Wellness and Success funding that schools in Ohio will receive the next two years following the passage of the state biennial budget.

“Because this money is only slated for the next two years, school districts in Ohio, including ours, have been leery about starting new programs because once the funding goes away, we’d have to fund it ourselves,” said Morton. “However, superintendents in Ohio recently received a letter from the governor saying to not be afraid to do good things for your kids, because he plans on putting this in the next state budget in two years.”

Morton told the board that in the near future, plans for that money will be shared with the board. The district received $567,687 for the fund in October.

The superintendent passed around a postcard that was sent to him in December from 91-year-old Lowell Joerg, a gentleman from Stockton, Calif. The postcard is dated May 5, 1910, and features the Defiance Central School building that was in use at that time. The postcard was originally sent to Miss Flossy Moore of Van Wert.

According to a letter sent by Joerg, he finds postcards like these near where he lives. In the letter he explained he sends the postcards, “where it could be appreciated,” (meaning where they originated) and that it’s a hobby of his he calls, “redistribution of happiness.”

“In his letter he told me I could find out about him if I Googled him, so I did,” said Morton. “For about 22 years he’s been in an assisted living facility, but he likes to go to flea markets, yard sales, antique stores where he looks for postcards like these and mails them to their original place of origin. He said in his letter he gave $6 for it, and if we wanted to sell it, you could probably get $7 or $8.”

Morton sent Joerg a return letter, thanking him for the card, and to let him know the 1918 school building that replaced it, and the 1928 auditorium attached to the 1918 building are still intact.

The board did meet in executive session to consider matters required to be kept confidential by federal law or regulations, or state statutes.

In other business, the board:

• approved Sheri Steyer and Todd Fruth to serve as the district’s civil rights coordinators and sexual harassment officers for the calendar year.

• established The Crescent-News as the district’s publication media of all regular and special meetings.

• established a records commission consisting of the board president, superintendent and treasurer.

• authorized the duties and responsibilities of the superintendent and CFO/treasurer.

• voted for the list of substitute teachers as approved by the NwOESC.

• approved annual membership in the Ohio School Boards Association for calendar year 2020 at $6,546.

• accepted the following donations: hats and gloves from Keller Logistics with an estimated value of $100; $250 from the Defiance Optimist Club for the DHS girls bowling team; $395 from the Defiance Lions Club to sponsor students attending the HOBY Leadership Seminar; and $1,000 from Defiance Physical Therapy to the high school athletic department for winning the DPT Classic Fan Award.