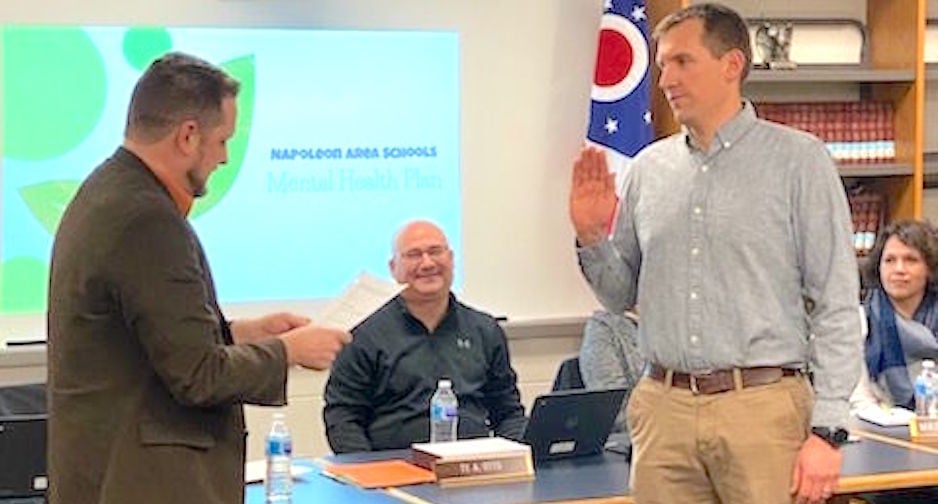 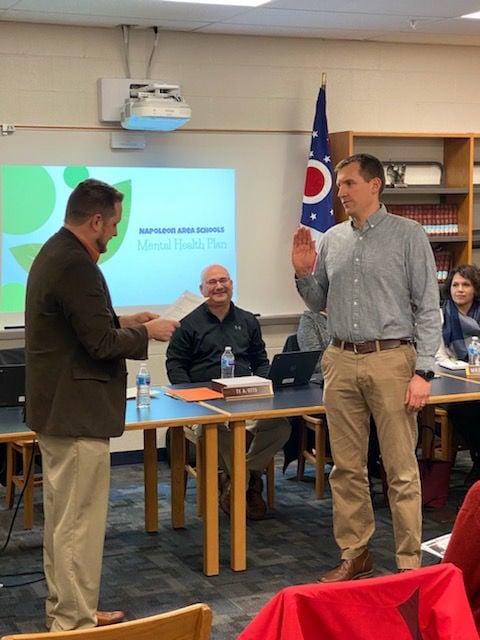 Napoleon Area City Schools superintendent Erik Belcher (left) swears in newly appointed school board member Ryan Crandall during the regular meeting of the board on Wednesday.

Napoleon Area City Schools superintendent Erik Belcher (left) swears in newly appointed school board member Ryan Crandall during the regular meeting of the board on Wednesday.

NAPOLEON — A new member of the Napoleon Area Board of Education was sworn in Wednesday, during its regular meeting at Napoleon Junior/High School (see related story, Page A5).

Sworn in was Ryan Crandall, who replaces long-time board member Rob Rettig, after Rettig stepped down at the board’s Jan. 14 meeting. Rettig was appointed to the board more than 11 years ago, before being re-elected to the position twice. The board had 30 days to find Rettig’s replacement.

Crandall, a 2001 Napoleon High School graduate, was one of three candidates interviewed for the position at a special meeting of the board on Feb. 6. Other candidates included Linda Comadoll and Terry Witt. Crandall’s term on the board will expire at the end of 2021.

Board president Ty Otto shared why the board felt Crandall was the right fit for the position.

“We had three very good candidates, but what stood out about Ryan was the fact that he has kids in the school system, and his experience as a business owner will be valuable to the board as well.

“Ryan graduated from here, he’s involved in the community, and he’s excited to serve the district,” added Otto. “We (the board members) are excited to work with him.”

“Becoming a school board member is something I’ve discussed with other people for the past few years, it’s something I’ve been interested in doing,” said Crandall, the husband of wife, Audrey, and the father of sons, Adam (8), Charlie (8), Nick (4) and Jack (2). “After the position opened last month, the people I discussed it with told me I should throw my hat into the ring.

“It’s a great opportunity for me to give back to the community,” continued Crandall. “I have two kids in the school system now, and two more that will be, so what happens is important to me. I’m looking forward to learning everything I can about the district, to see what my role will be, and learning as much as I can from the other board members. I want to contribute in a positive way.”

Napoleon Area City Schools superintendent Erik Belcher shared he was impressed with Crandall after meeting him prior to his appointment to the board.

“Ryan is a quality individual,” said Belcher. “I didn’t get the opportunity to meet the other candidates, but I feel very confident the board picked a good person. He has two kids currently in our school system, and two more coming in the future years, and it is apparent he cares what happens here. In addition, he’s really invested in our community.”